Pelosi opened by stressing that the House continues its legislative work, trying to lower the cost of prescription drugs, finalize a US-Mexico-Canada trade agreement, etc.

1/ Pelosi: Investigating a president for impeachment is a “sad time” for the American people, but “the times have found us.”

She's echoing past press conferences, saying that we must follow the facts, impeachment is serious so we must be careful and deliberate, etc.

2/ She says the president is “assaulting” the Constitution, giving us no choice.

[Note: She stresses that she's forced into this by the egregiousness of Trump's conduct]

Schiff offered an update of events. I put them on a note pad to shorten the thread: 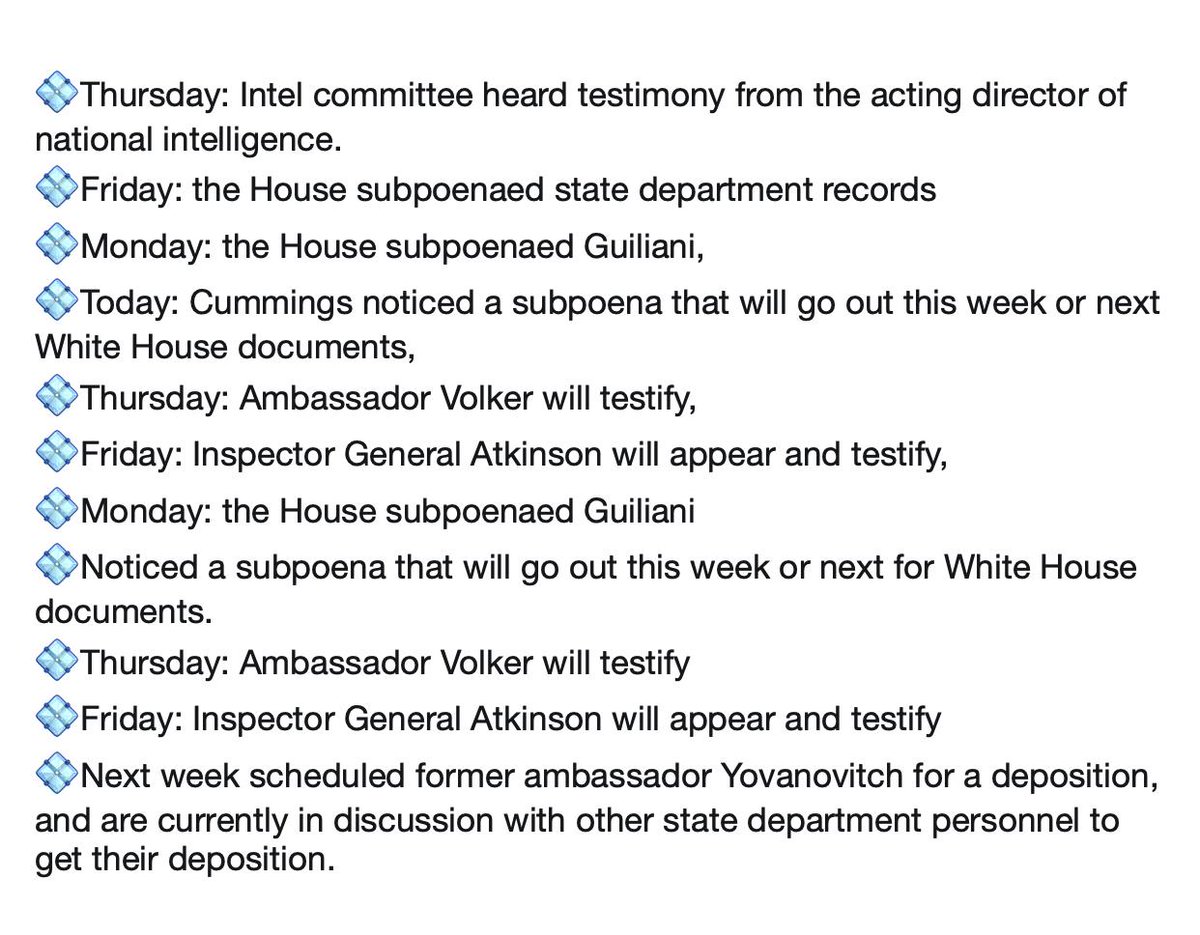 4/ Moreover, obstructing allows the inference to be drawn that the underlying allegations are correct.

They “feel a sense of urgency," but they want to proceed responsibly and deliberately.

When deciding whether to litigate the obstruction time is an important consideration.

5/ Schiff notes that the WH strategy seems to be to drag this out until it’s too late for Congress to act.

Pelosi emphasizes that in a phone call, Trump admitted that the call as summarized took place. Trump said it was “perfect.” She said it was wrong.

6/ Schiff and Pelosi discussed the Whistleblower's right to remain anonymous.

They stressed the danger in the president’s actions in calling those who come forward with evidence against him “spies” and “traitors”:

It’s an attempt to intimidate witnesses and “incite violence.”

7/ Q from a reporter: Are we making too much of one phone call?

Pelosi: “Absolutely not." She then stepped aside for Schiff to answer.

Schiff: The Framers were concerned with foreign interference in American affairs. . .

8/ They wanted to make sure the president was advancing the interests of the U.S. and not secretly advancing his own private agenda.

From Schiff: It’s hard to imagine a situation that would have alarmed the founders more than what happened during the Zelensky-Trump phone call.

9/ In that call, Trump used the power of his office to pressure a foreign leader to intervene in our election to help his campaign.


Schiff (I'm summarizing): My GOP colleagues who minimize Trump's actions will have to answer: If this conduct isn't impeachable, what is?

To determine the depth of the president's misconduct, we have to know:
💠What was the State Department’s role?
💠What was the AG’s role?

11/ Pelosi added: In that phone call, the president undermined national security and attempted to undermine our elections.

Pelosi then distinguishes what behavior is impeachable and what is not.

Impeachment is for behavior that:
💠endangers national security. . .

12/
💠undermines the constitution by stripping away checks and balances (for example, when Trump says Article II means he can do whatever he wants) and
💠Undermine election integrity.

She said that all three were evident in Trump’s phone call.

Schiff and Pelosi's stated goal is to conduct a hearing that is fair and worthy of the founders.

Another obvious goal: Draft Articles of Impeachment so compelling that:
💠The GOP stops shield this president, or
💠They'll have a lot to answer for.

14/ A good rule: When there is an easy way and a hard way to accomplish the same thing, take the easy way.

Litigating may be unnecessary. Silence and stonewalling can be taken as an admission of guilt.

15/ I hope it's clear from the conference why throwing people into jail could be a bad idea.

Just as litigating the obstruction may not be necessary, jailing people, too, may be unnecessary, distracting, and time consuming.

16/ The winner isn’t the one who hits hardest.

The winner is the one who saves democracy.

Also, personal note: I dislike jails. I don't think that prison works as a deterrent or anything else.

I cringe when I hear anyone say "lock them up."

18/ . . . obviously need to be restrained for the good of society, but (in my view) it should be a last resort.

Schiff and Pelosi were obviously going for the "we're the calm measured adults in the room, trying to be fair and conduct a proceeding worthy of the founders."

19/ Clarification: I was referring to the calls to jail the people who are resisting subpoenas.


20/ "The President of the United States ordered me to do it," is a pretty good defense. I never had a client with such a good defense.

Arguably it overlaps with "duress," which is a recognized defense.

. . . "yes, you're honor, I pointed the gun at the teller and demanded all the money. But I did it because the Bad Guy had a gun pointed at MY back, so I had to do it."

OK, "POTUS Ordered Me To Do It" isn't that strong, but people targeted by Trump are put in danger.

Here is this thread as a blog post:  https://terikanefield-blog.com/the-pelosi-schiff-press-conference/?preview=true&_thumbnail_id=4270 …