Will Oremus+ Your Authors @WillOremus oh-REE-mus. Senior writer for @ozm: onezero.medium.com/ Previously: @slate. I write about how tech shapes us. DM for Signal. Oct. 03, 2019 1 min read + Your Authors

But a growing body of research suggests this is a flawed model for privacy. I wrote about it last month:  https://onezero.medium.com/how-much-is-your-privacy-really-worth-421796dd9220 …

It lays out a number of rights which all sound logical enough at first glance. But study after study shows the context in which consumers make privacy decisions is antithetical to the sort of rational calculus this approach assumes. 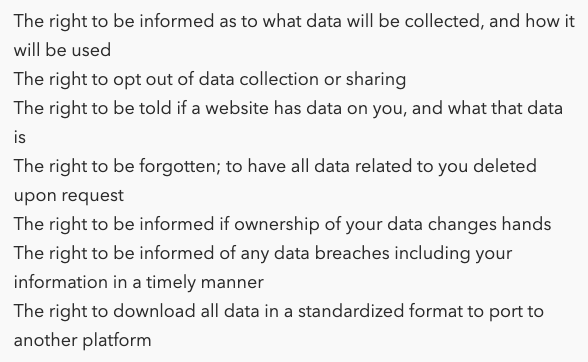 Here is a good thread on what's wrong with Yang's approach, and how its seemingly common-sense proposals might end up entrenching a broken system more than fixing it.

This @cnet piece helpfully grounds the critique of Yang's plan in the specifics of our current tech moment—Alexa everywhere, predatory targeted ads, and the use of data for behavioral manipulation.  https://www.cnet.com/news/andrew-yangs-privacy-proposal-sounds-great-but-could-be-awful/ …

An important point here is that, while Yang's plan claims to make people's data their property, its actual proposals add up to something far less than that.

To sum up: Yang claims his plan would treat data like private property, which would be a radical shift but also a dangerous one.

Yang's actual plan would treat data basically the way CCPA does, which would be neither radical nor dangerous (but also not super-effective).