"The displays of patriotism, especially from young people, also show that the party’s propaganda machine has mastered the power of symbol and symbolism in the mass media and social media era."  https://www.nytimes.com/2019/10/05/technology/china-propaganda-patriotism.html …

"Beijing may be still struggling to influence the outside world more effectively, but at home it has learned how to compete with short videos, Hollywood movies and mobile games for the public’s attention span." 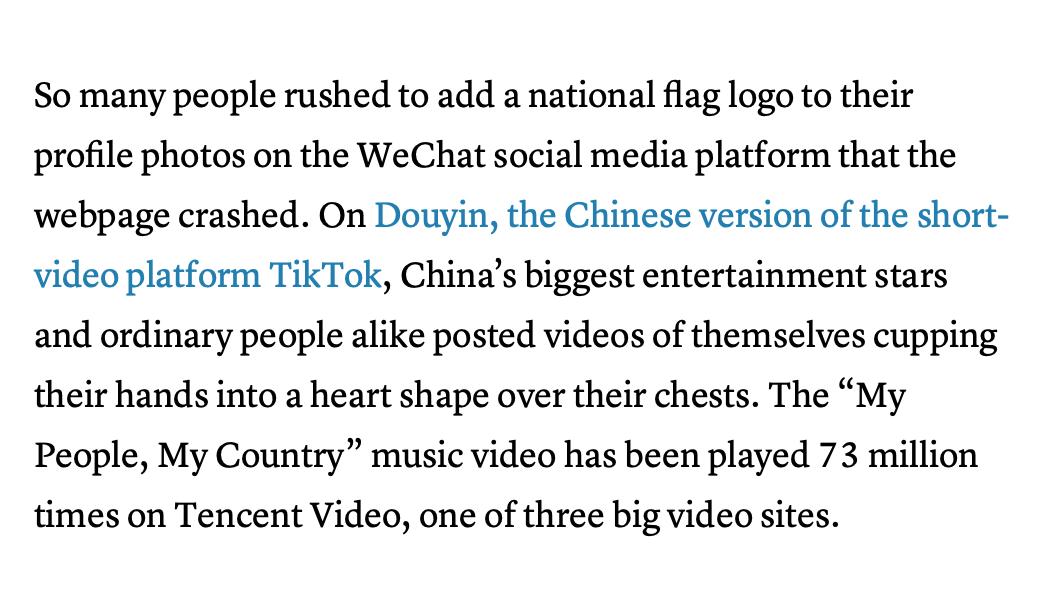 I'm not convinced that the Xi clapping games, C-pop, or Huawei raps are nearly as influential as given credit. They're transparent, & China's young audiences are smart — but maybe that memeosphere, the comedic value of a new nationalist game, reaches the same goal in the end.

It really is tough to draw conclusions as to the origins of what we're seeing. The breadth & quality of propaganda is certainly increasing under Xi, under the Communist Party's centralization of media and targeting of social media and netizens. But it remains equally memeable.

To different audiences, these artifacts mean different things. The Trade War is creating a common enemy, in part through propaganda, and that tonal shift is most embraced in the Lost Generation. It was always there, but is more deliberately directed to propel the 'Chinese Dream.'

To what extent does the seeming embrace of young nationalism share that orchestrated push? Are we really seeing a successful plot? Or are we looking at saturation of the Chinese internet, & a viral nostalgia gripping a secular generation, bored by money, facing another downturn?

As much as we are seeing a stronghold catalyzation under Xi, & increasing centralization, we are seeing so many other factors too. The CCP didn't anticipate antiELAB, nor could we foresee a cultural rebirth as China's rule turns 70, and the new forces of an unprecedented Internet

Most of our understanding of the Chinese internet machine comes from subtractions & additions, censorship & propaganda. But we still don't understand the in-between, the quiet algorithmic manipulations that create artificial weight behind the WeChat flag avatars & Douyin hearts.

I don't think I agree w/ the premise that China isn't mastering global soft propaganda too. The influence doesn't look like the Pentagon's aircraft flying beside Iron Man, or South Korea's accelerated-human-evolution boy bands, because we may just need to broaden our definitions.

Soft propaganda of the future — or the current — may just look, or feel, like invisible upper hands & systems. While the Higher Brothers & Chinese nationals in Hollywood wave the red flag of a One System, the bots flood, and Wikipedia battles breakout, what systems do we not see?