I would like to apologize for calling @kvlly a "blight on the industry".

I should have depersonalized it and said, "your *words* are a blight on the industry". Thanks to those who helped me see where I was wrong.

Lots of people were very very angry about my tweet. Most of you were angry about things I never said, many of which I actively rebutted time and time again.

For instance, I have never said that blocking Friday deploys is bad! -- only that you shouldn't feel *proud* of it.

If it's the best workaround you can manage at the time, more power to you.

Just acknowledge it with the same mild shame as I acknowledge my bash deploy script, and we are *all good*.

Do not, do not, do *not* get all high and mighty about how you nobly block deploys because you Care So Much about your people and their weekends.

If you really cared, you'd invest in making deploys not suck so they could sleep through the night all week long.

And about the anti vaxxers thing.

I was raised anti vax. I didn't get my shots til I was well into my twenties. I don't make this comparison lightly.

I have been considering the analogy all weekend -- was I too hard on them? and my considered opinion is no.

Both are examples of privileging emotions over science; of encouraging people to ignore the real evidence in favor of what FEELS right. And both *hurt people*.

How many people do you know who have burned out of tech, who have had psychological meltdowns from the pressure and lack of sleep, who have lost relationships and health to the stress of on call? Who have switched careers entirely?

Look at the replies to my earlier thread, or any thread on this issue. They are full of emotional reactions and a shocking amount of misinformation, which has unfortunately been mainstreamed by people like @kvlly.

No matter how many times we point to the science.

Read "Accelerate". Read the DORA reports. Talk to people who have done it before. High quality teams can be judged on four metrics:

Blocking Friday deploys works *directly* against half of those.

Again. I know not everyone has full control over their roadmap, or works on a great team. I'm not actually coming out against Friday deploy blocks nearly as hard as some of you seem to think I am. You do you, kitten.

But just don't pride yourself on your shittiest hack. Ok?

It's that pride that's holding us back. That emotional association of Friday deploy blocks with "what caring managers do" is what keeps you from putting "actually fixing shit" on the roadmap, eventually.

And that embrace of unreality *hurts people*. Just like anti-vaxxers do.

And to those of you who are all huffy because "people die due to anti vaxxers, nobody died because code wasn't pushed on a Friday" -- fuck you.

I know people who have died or been injured or injured others due to on call practices. It's great if you don't. But do not trivialize.

Well, I regret saying it to the extent that it made me the subject and distracted from the actual damage being done. I have Sam Bee Remorse.  https://www.vice.com/amp/en_us/article/j5kjzg/samantha-bee-cunt-comments-outrage … 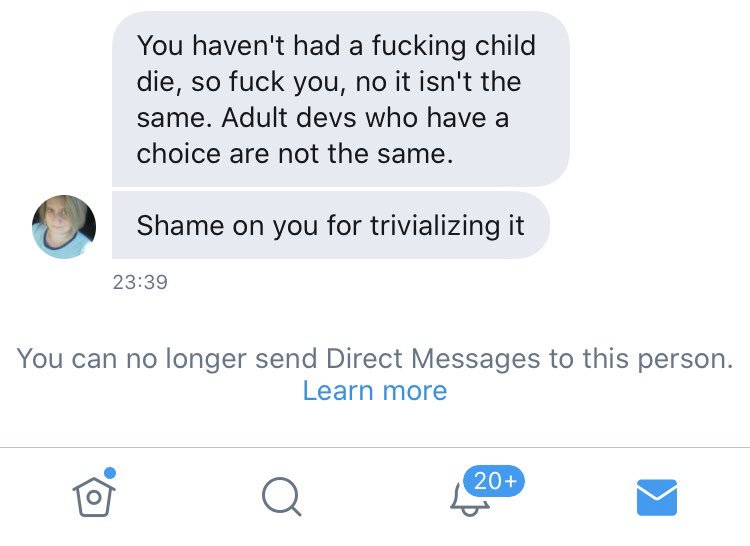