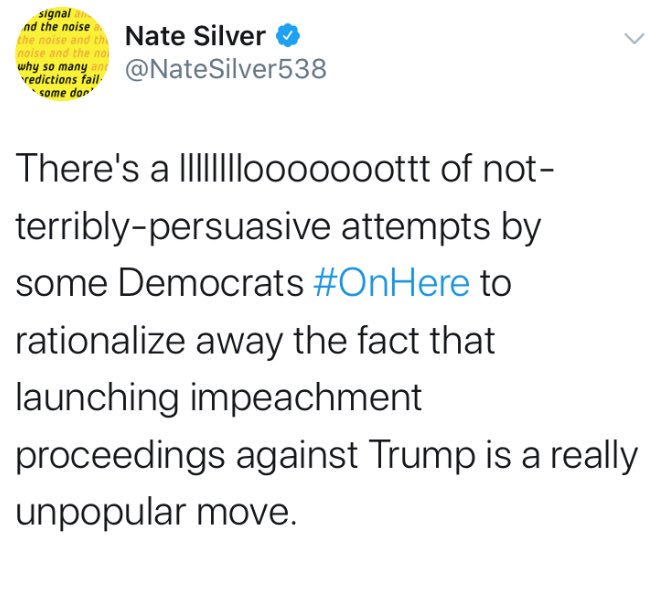 You know, lllllllooooooootttt of us #OnHere *rationalized* that most people pay only cursory attention to what’s happening, so not impeaching makes people think whatever the infraction was isn’t impeachable, and the reverse would obviously apply for impeaching.

And yes, it might fail, but at least the failure wasn’t assured, and at least you didn’t defeat yourself.

And at least you did what’s right.

It’s so much easier for them when they don’t have to fight.

The relevant facts are a bad point being made about a good point, but as I didn’t crop the date purposely, I’ll note Nate’s tweet came in April, after not-impeaching over Mueller led people to believe there was nothing impeachable in the report.

And I’ll note that support gained for impeachment after Pelosi announced it, not before.

And I’m confident positing that if Pelosi had continued opposing impeachment, support for impeachment would still be low, and the Ukraine news cycle would have moved on.

I’m honestly not even bagging on Silver specifically—I chose his tweet because its snideness made it twitter-famous, and it juxtaposes nicely against his org posting the new polls.

Point is: sometimes the only reason people aren’t rallying is you’re giving them no reason.

Last point: it’s good and necessary to aggregate data, and to interpret it. Silver’s shown real skill at this within the realm of opinion polls and election results.

And clever is different than wise.