It’s weird how Benny Facts stops wanting to debate the issues the instant he sees the topic as threatening him. 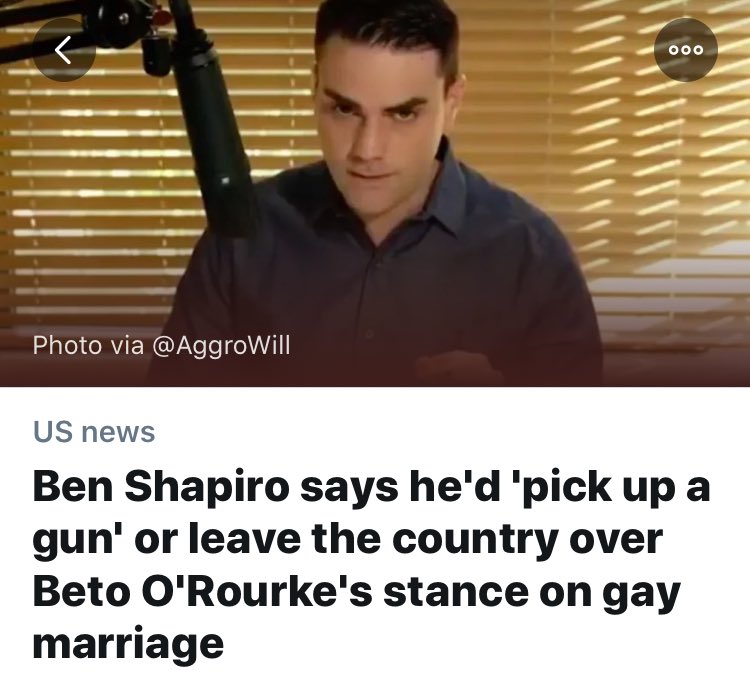 One interesting thing about gay people is, they never picked up guns and started shooting politicians— even after decades of relentless persecution.

But my man cracked after one town hall.

That’s a fact. It doesn’t care about Ben‘s feelings.

Oliver Sipple saved Gerald Ford from being shot by an assassin. When the media found out he was gay, the outing destroyed his life.

Ford sent him a note of thanks. For whatever reason, Sipple was not invited to the White House.

A man in Montreal shot up a mosque last year, murdering 6 and injuring 19, motivated by anti-immigrant sentiment similar to those broadcast by mainstream right-wing media figures.

He checked Ben’s Twitter feed obsessively the month before the attack.

The truth is, empowered bigotry, frequently disguising itself as religion, has been enacting real violence on gay people for years and decades and centuries.

When bigotry loses the power to pass violent laws, they quickly turn to violent acts.

Some people believe in essential humanity, even of those who harm them, even those with whom they disagree harshly. They oppose, but they don’t kill.

Others worship their bigotry and their belief in the redeeming power of violence, and call it their God, which it is.

People will tell you what they worship. Sometimes they’ll even use words.

Good morning, by the way, how is everyone?

Correction to the above: it was Quebec city, not Montreal, and it was two years ago. I regret the errors, and that is also a fact.