Spoiler: If this was a movie plot, nobody would believe it.

They concealed the scheme by laundering money through limited liability bank accounts and straw donors, and making false statements to the FEC.

2/ Parnas is a US citizen born in Ukraine.

Fruman is a US citizen born in Belarus.

Kukushkin is a US citizen born in Ukraine.

Correia, a US citizen, born here.

Foreign National-1: A Russian citizen and businessman. (Has anyone reported who this is? If so, I haven't seen it.)

3/ In March 2018, Parnas and Fruman began making substantial contributions to candidates to advance their own interests and at least one Ukrainian government official with whom they were working.

They created Global Energy Producers (GEP) an LLC to funnel the money.

5/. . .to make political donations to candidates to gain influence that would benefit a future business venture, a recreational marijuana business.

(They also attended political fundraiser for a NV Candidate-1.)

6/ They were careful to hide Foreign National’s Russian identity due to “his Russian roots and current political paranoia about it.” (Kukushkin’s words)

Foreign National-1 was to be a source of funding for between $1 and $2 million in donations and contributions. . .

They ignored the deadlines for applying for licenses. They funded lots of money to candidates, but “the Business venture did not come to fruition.”

[Was the business fake all along?]

8/ The charges: Conspiracy to defraud the US (2 counts) false statements to the FEC; falsification of records.

That's the end of the summary.

Remember: Indictments don’t contain all the evidence known to the prosecutors.

10/ Dowd called the House requests for information an effort to “harass, intimidate, and embarrass my clients.”

Less than a week later, his clients were arrested while trying to leave the country, and jailed.🤦‍♀️ (A little embarrassing?)

Now the House subpoenaed those records.

11/ Around late 2018, Parnas and Fruman began working closely with Giuliani to get Ukraine to investigate the Bidens
https://www.vox.com/2019/10/10/20907972/lev-parnas-igor-fruman-rudy-giuliani-arrested …

Parnas and Fruman claimed in interviews to have attended an 8-person session with Trump in D.C. to discuss the 2018 elections.

12/ Sessions (Congressman 1) after receiving money from the Defendants, wrote to Pompeo complaining that Yovanovitch was biased against Trump.

Sessions says there was no correlation; he sent the letter because he believed it, not because he received money😂

13/ . . . on May 9, 2018, Parnas posted a picture of himself and Correia with Sessions with the caption “Hard at Work.”
https://www.pbs.org/newshour/politics/pete-sessions-appears-to-be-congressman-1-ensnared-in-guiliani-associates-indictment …
May 10: Sessions wrote to Congress that he had “notice of concrete evidence” that the ambassador had disdain for Trump.

Do these guys have a sense of irony?
Or are they extremely literal?

15/ Parnas and Fruman worked on the “legal team” of a Ukrainian oligarch Dimitry Firtash, who faces bribery charges in the U.S.

Firtash is under house arrest in Vienna.

Parnas and Fruman were arrested while trying to leave the country with one-way tickets to Vienna. 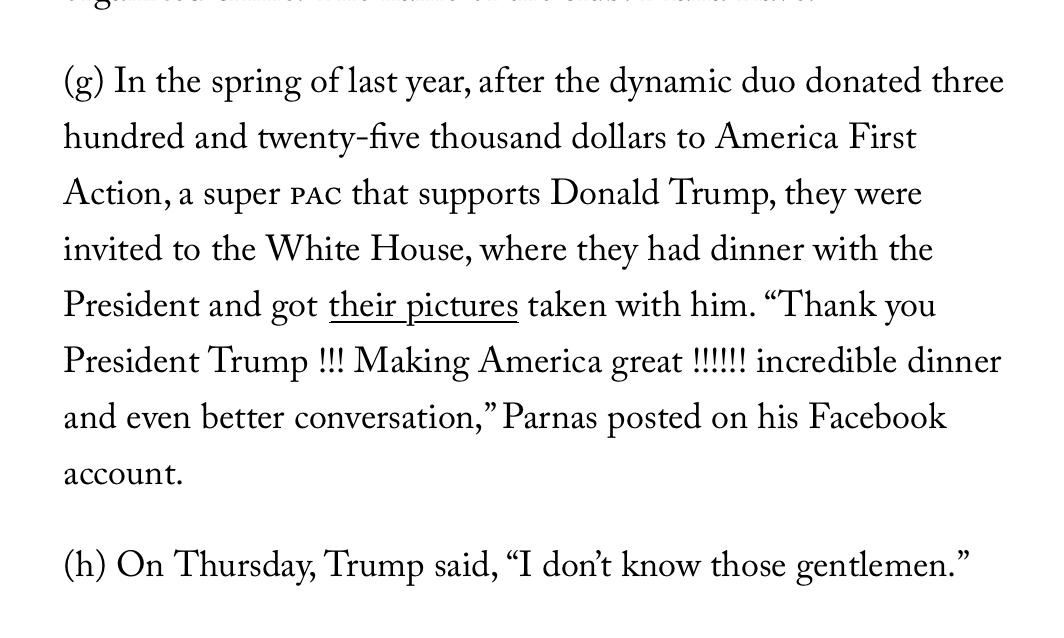 17/ John Dowd initially headed up Trump’s legal team for the Russia investigation from June 2017 until March 2018.

We don't know who is paying John Dowd.
https://www.vanityfair.com/news/2018/09/trumps-lawyer-tried-to-pay-manaforts-legal-bills …

@emptywheel points out that we also don’t know who is paying Giuliani.

18/ Who is paying Giuliani is an interesting question given rumors that Giulini is under investigation for acting as a foreign agent.
https://nytimes.com/2019/10/11/us/politics/rudy-giuliani-investigation.html ……
https://nbcnews.com/politics/trump-impeachment-inquiry/democratic-senators-renew-questions-about-rudy-giuliani-s-apparent-work-n1058686 ……

Apparently Firtash is financing the activities of Parnas and Fruman.

19/ In Jan. 2019, Parnas and Fruman helped arrange Guiliani’s New York meeting with Lutsenko, thus kicking off the Ukraine-Biden scandal for which Trump is soon to be impeached.

All my threads are also blog posts. You can read this one here:  https://terikanefield-blog.com/if-this-were-a-movie-nobody-would-believe-it/ …