The tones surrounding the adult industry are shifting, w/ 'democratization' of private snaps & OnlyFans unlocking fair value, but there's a sad truth here too. Many of the creators first begin as YouTubers, until the CPMs can't keep them afloat, and their fans force them to pivot 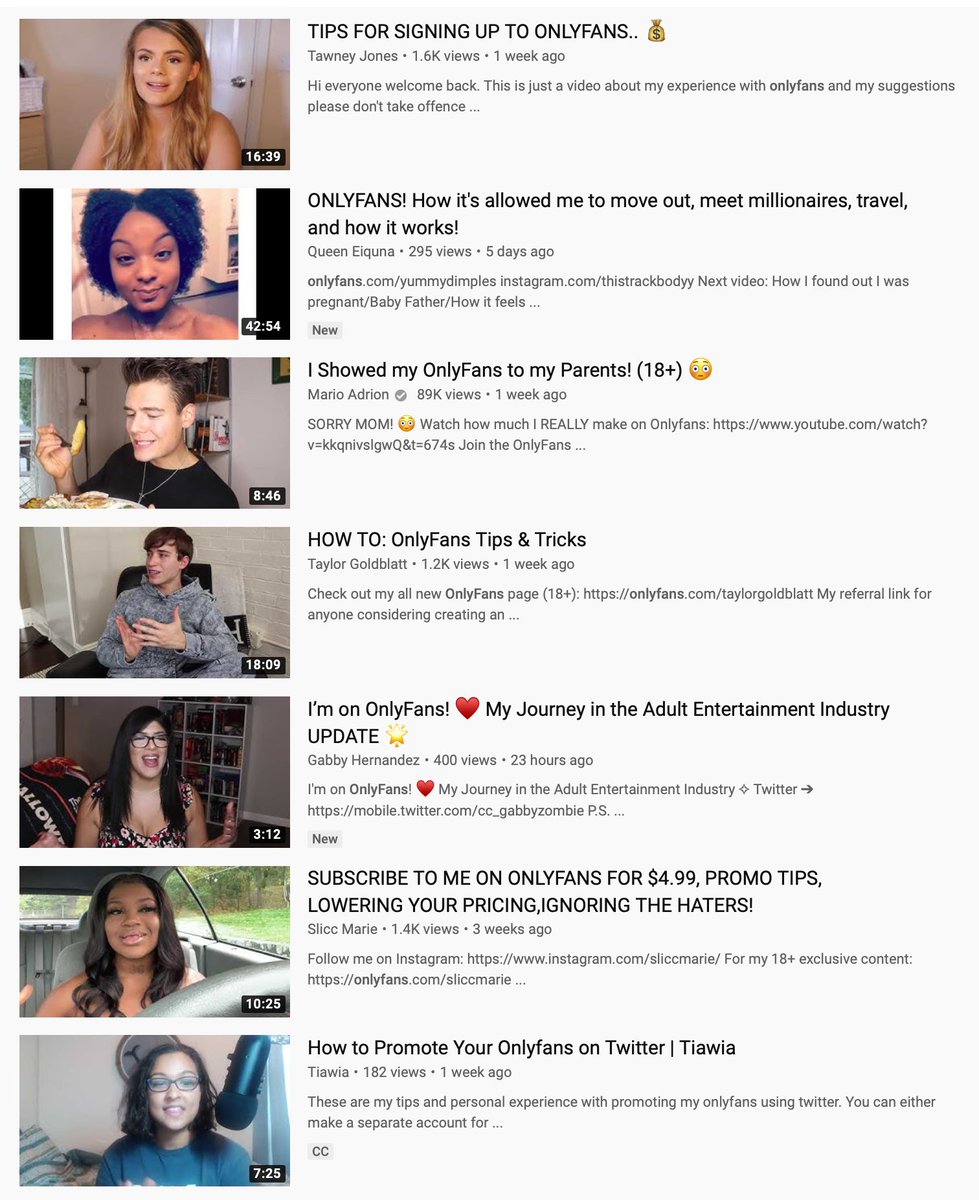 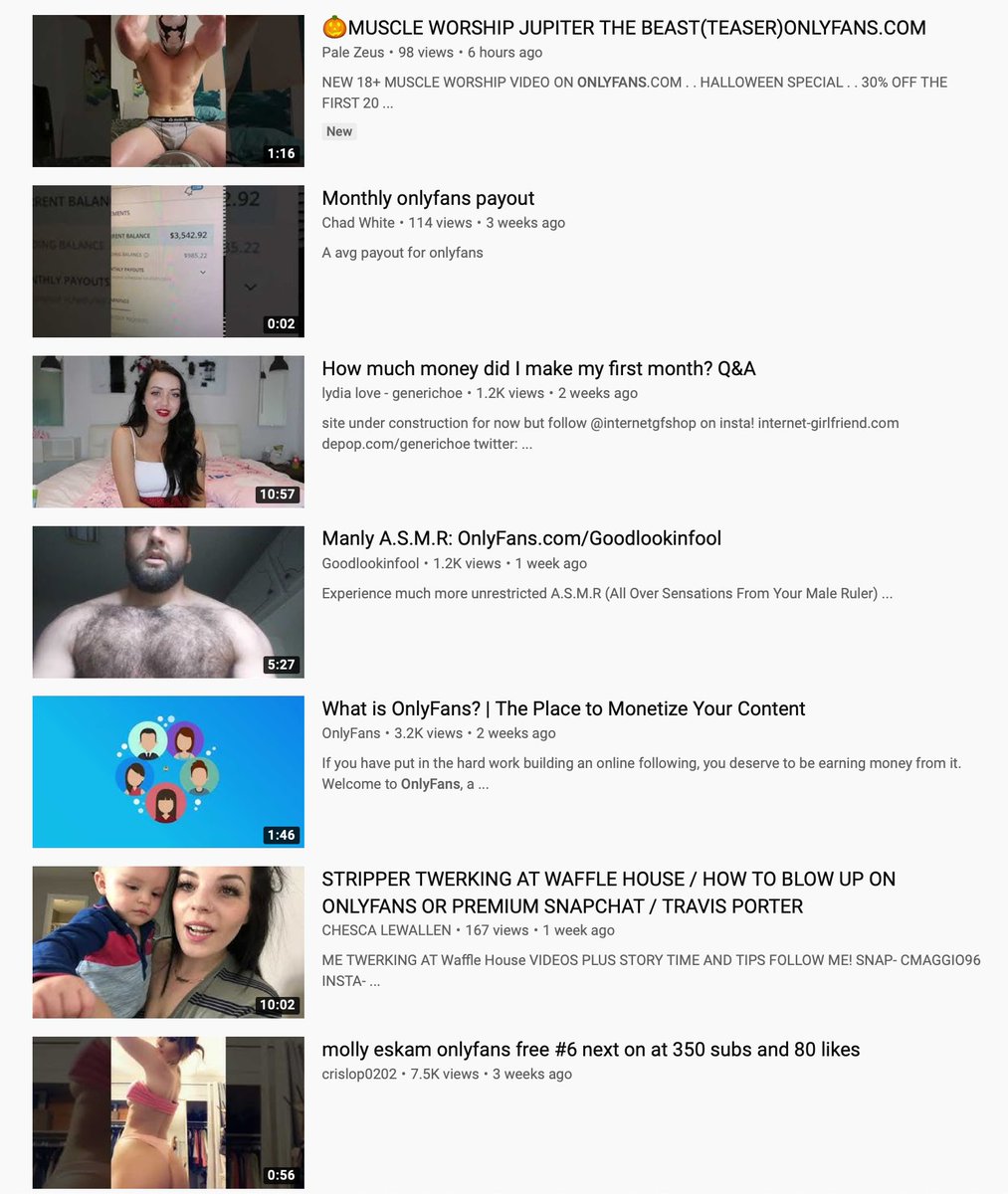 When FOSTA-SESTA were implemented as law, many things happened. Firstly, as feared, the murder rate increased for sex workers, because Craigslist and Backpage acted as an information buffer to prevent workers from engaging with known dangerous 'johns.'

Less feared effects appeared too. For a few years, Tumblr had acted as a free tier advertising strategy for the 'neo' pornographic content creators. Unlike the traditional industry, the algorithms & reblogs gave them free reach, while Tumblr would freely host their content.

That of course changed as lawmakers and advocacy groups targeted Tumblr. It had a very real & troubling child pornography problem, but those pair laws also in-effect started the action that led to Tumblr banning all adult content creators & imagery from their platform. Refugees.

It wasn't nearly as simple as that. Apple, because it inherited compliance of these laws, was in-effect hosting Tumblr, thus illegal content. Apple became pressured, and banned Tumblr from the App Store — which was the real power that forced Tumblr's hand.  https://www.wired.com/story/tumblrs-porn-ban-reveals-controls-we-see-online/ …

Oddly enough, what appears to have happened, as the legal Tumblr creators became Twitter diaspora, OnlyFans began to hit a critical mass. Some of that was just timing, but also, Tumblr was largely an invisible network — and Twitter was a public billboard for those OnlyFans URLs.

Riding a few long-lived trends, and massive forced-hand events that altered how adult content is created & distributed, we've entered a time where the go-to monetization strategy for individuals to monetize their adult content is almost exclusively an OnlyFans account.

This wasn't always true. Patreon was a massive player there, until these shifts in compliance encroached, and they changed their TOS on a dime. I think Patreon's leadership had more to their calculus, and I'll get to what I think that was.  http://msnaughty.com/blog/2018/07/03/alternatives-to-patreon-for-porn-creators/ …

In trying to understand what is happening here, for the creators who are creating this content, I dove into the vloggers, especially those that had pivoted. One of them was DEEK AESTHETIC, a 19y/o longtime internet kid that makes fitness content. 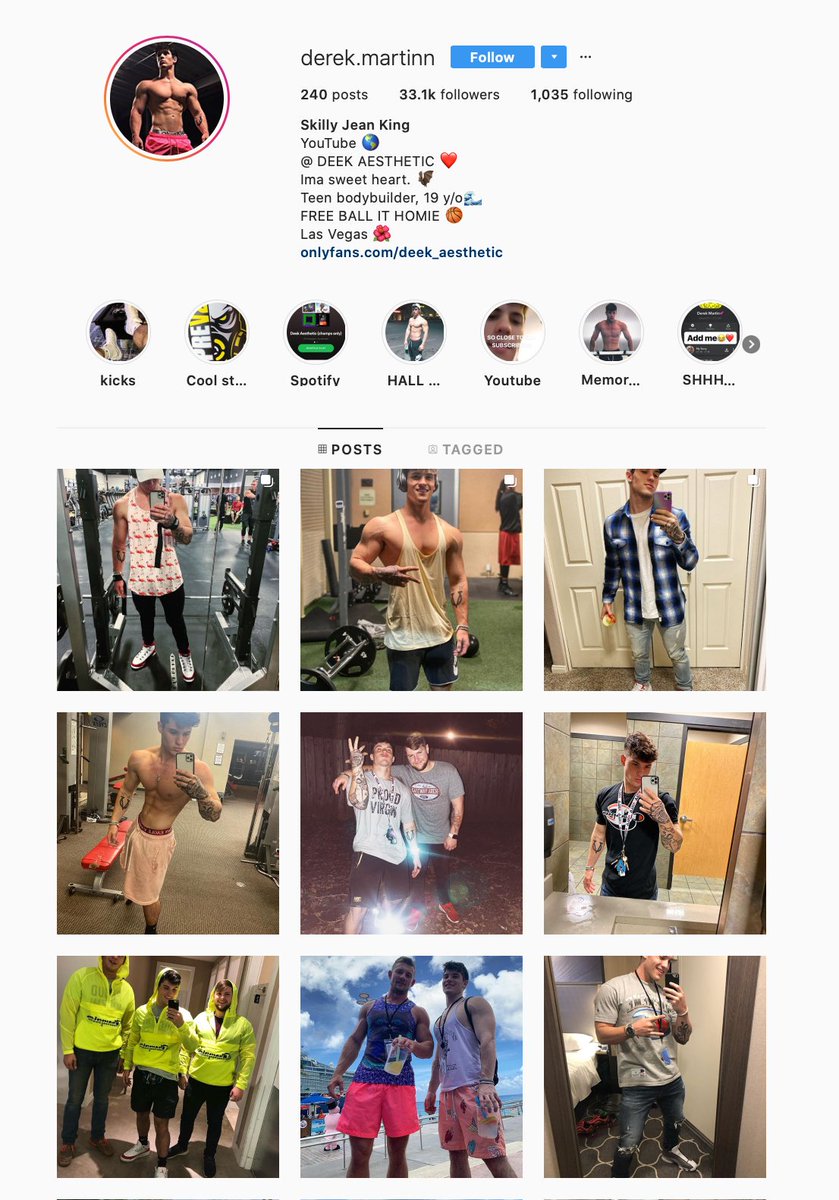 This creator is a product of @Casey's vlogging wave that literally shifted the trajectory of an entire generation of aspiring creators. So many young people are like this 19y/o kid; this was a turning point, of desiring to grab life by the horns & vlog.  https://www.youtube.com/channel/UCLARy0HP56GaaKeJNkWZpcw …

One of Deek's early videos caught my attention. It's titled "TRAVEL VLOG | Aesthetic ADVENTURE | WORKOUT Physique Update" and it's the epitome of Neistatian YouTube. Of a kid trying to learn filmmaking, to tell his story, and build a fitness community.  https://youtu.be/jsHFBjHrMJs 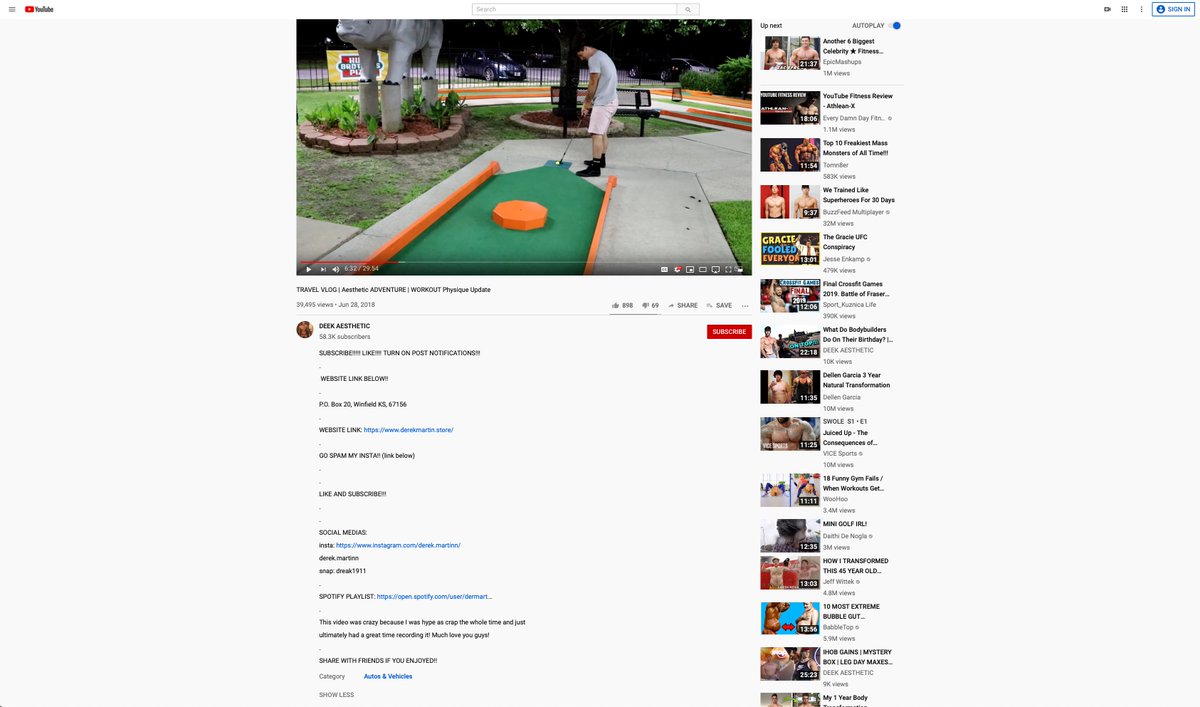 It's when I saw the comments that I became angry & had more clarity. This 30 minute video from a 17 y/o YouTuber vlogging his life, attempting to educate & build a hobbyist community, was condensed into predatory thirst of a minor. And he knew, but had to ride the clickbait bull. 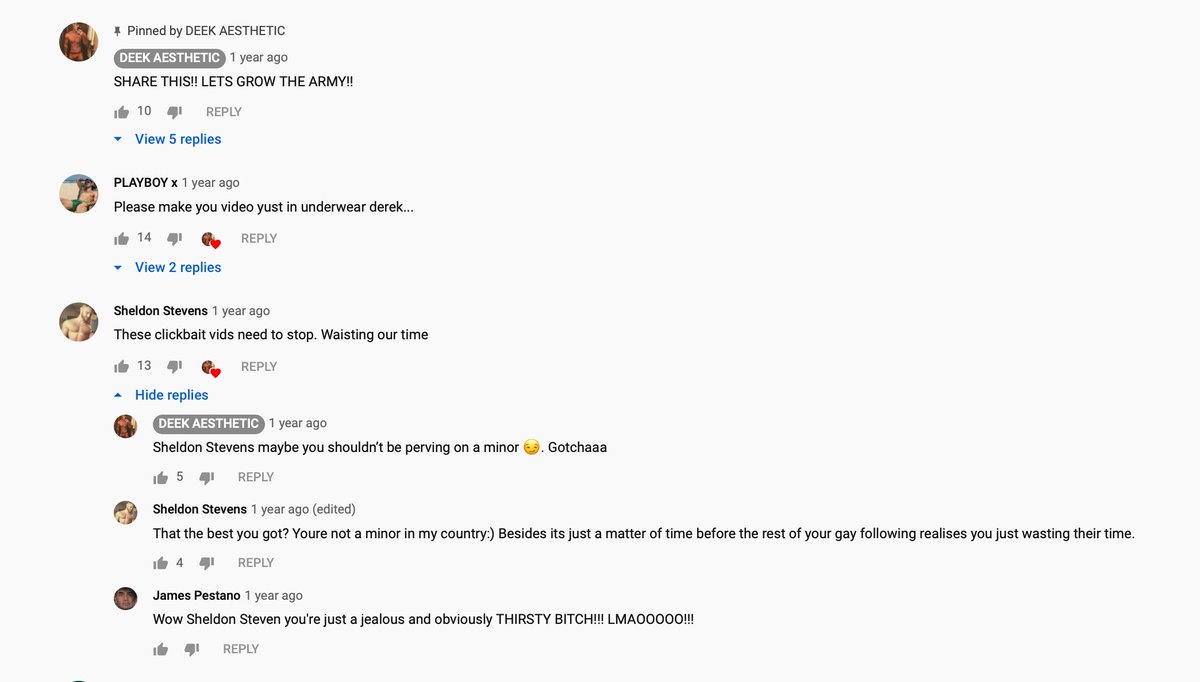 This YouTuber only recently started his OnlyFans endeavor, after more than 2 years of producing content & dealing with his comment section — which can only be described as predatory. In this video, he explains why, but first has to first defend his tattoos  https://www.youtube.com/watch?v=qgfsm05_nPk …

It's that forced explanation that is sad, and just alarming. When this young guy made the not-unusual decision to alter his body with a tattoo, his calculus was in whether his predatory community (some are well meaning too) would turn on him. His choices are held hostage by them.

In this portion, he begins to explain why, and the decision appears to have been made almost entirely because his community wanted him too, and had requested it for years — including when he was a minor. He quickly also has to defend why his 'base' isn't as large as they desire.

There are so many reasons why someone would become an adult content creator, and it's not something that should be villainized. What OnlyFans represents is safer & more transparent than much of the Hot Girls Wanted-like adult industry. But it is not without major faults.

What Deek is saying may be true, and that these are his wishes, and thankfully, the world is a lot more pleasant & positive towards those choices. But the numbers tell a more depressing story. He started an OnlyFans near his all-time low on YouTube. When the money dried up. 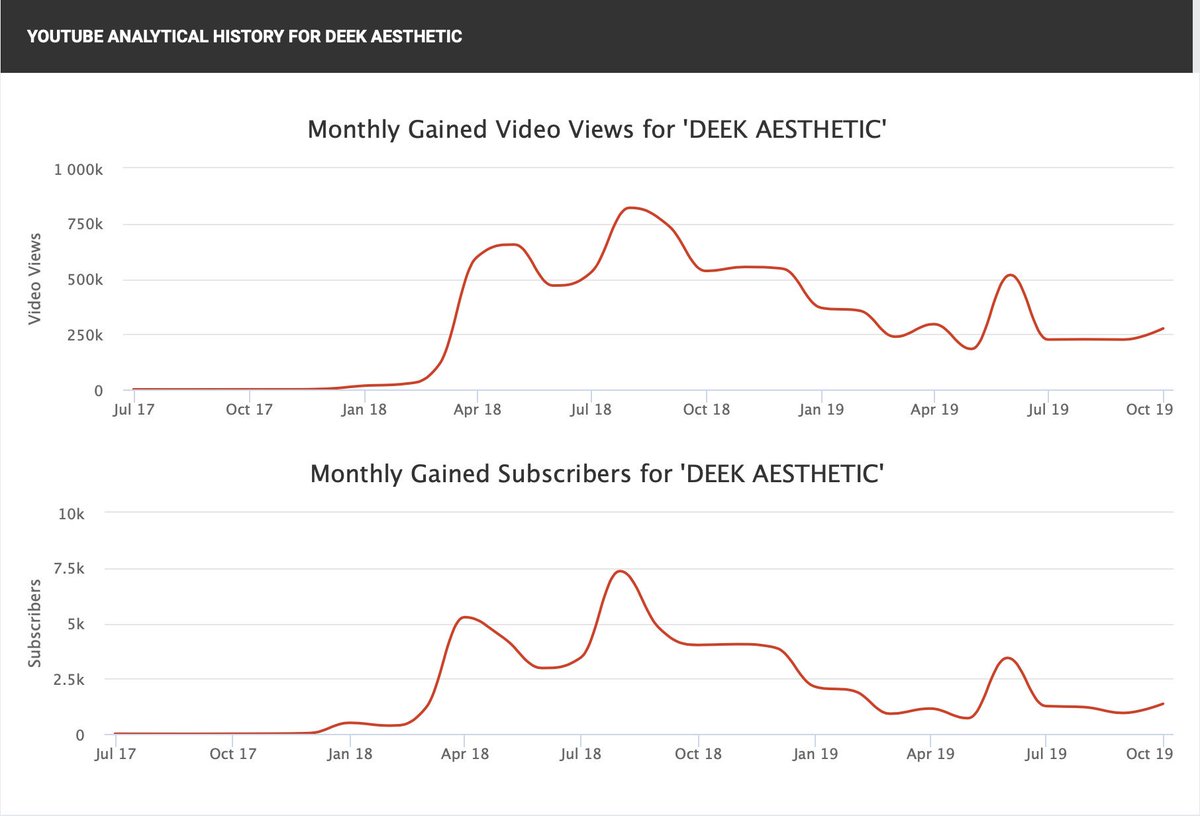 OnlyFans is exploding without challenge, but what I see in Deek's story are real, devastating questions of the social media era that need to be addressed. Did the Internet, in this post-Tumblr & demonetized YouTube world, groom Deek? Were these truly his choices? Is he alone?

I'll leave this thread w/ a recent podcast featuring Mia Khalifa. Her story is a poignant example of how Internet fame can go wrong in an instant, and in this TikTok world w/ iLOVEFRiDAY's anthem blaring, are others following in her regretful footsteps?  https://www.youtube.com/watch?v=JxDIPVCSPMc …