Once the walls were closing in on Nixon, he resigned.

1/ I agree with Lowry’s analysis and believe he offers insight into the Trump-Fox-GOP mindset.

The “worst interpretation” of the “current facts” in this sentence refers to everything we know about Trump at this point.

Let that sink in.

2/ If the Senate votes to remove Trump, a “significant proportion” of the GOP would consider it a “dastardly betrayal.”

While Nixon stepped aside for the good of the GOP, @RichLowry explains (in the next screenshot) the extent to which Trump holds the GOP in fear. . .

To put it bluntly, GOP Senators are afraid Trump will tweet that they are “human scum,” which will turn Trump’s avid supporters against them, which means they will lose in the next election.

4/ Trump knows that if he keeps his base energized, he keeps the GOP in fear, which keeps him in power.

How Trump’s relatively small base controls all of us:
💠They control the GOP.
💠Trump controls them.
💠The GOP controls the Senate and most states.

This theory gives @LindseyGrahamSCway too much credit.
It assumes he’d do the right thing but can’t because he’s being blackmailed.

In fact, the GOP is terrified of losing power.

6/ Lowry explains that they live in fear of someone like Elizabeth Warren becoming president.

They see it as an existential threat.

To understand why they'll accept lawbreaking to prevent loss of power, see 👇on the Paranoid Style in American Politics.

7/ This brings us to the impeachment strategy of the House Democrats.

It wasn’t until the Ukraine scandal that most Americans believed Trump should be impeached and removed.

8/ If Lowry is correct that the GOP-led Senate won’t convict even on the worst interpretation of the current facts, expanding the Articles of Impeachment to include all of Trump’s wrongdoing wouldn’t make it more likely for Trump to be convicted in the Senate.

9/ It would, however, give the Trump-Fox-GOP lots of talking points and opportunity for spin and propaganda.

The Ukraine scandal is a microcosm of the whole picture.

Focusing on the Ukraine scandal creates a lose-lose situation for the GOP Senators.

10/ If they don’t convict, they will lose in 2020 because a large enough majority of voters will be horrified that they backed an openly corrupt president.

If they convict, they will lose in 2020 because Trump’s base will turn on them.

11/ Remember: Removing Trump will not end this nightmare.

As the Never Trump Republicans will tell you, the current GOP needs to be smashed so a true conservative party can arise from the ashes.

The current GOP is not conservative. See:

12/ The GOP knows they’re outnumbered.
Lowry knows it 👇
Trump knows how to read the polls.
They can see they'll lose.

What we saw this week (GOP members who stormed the SCIF) came from desperation. 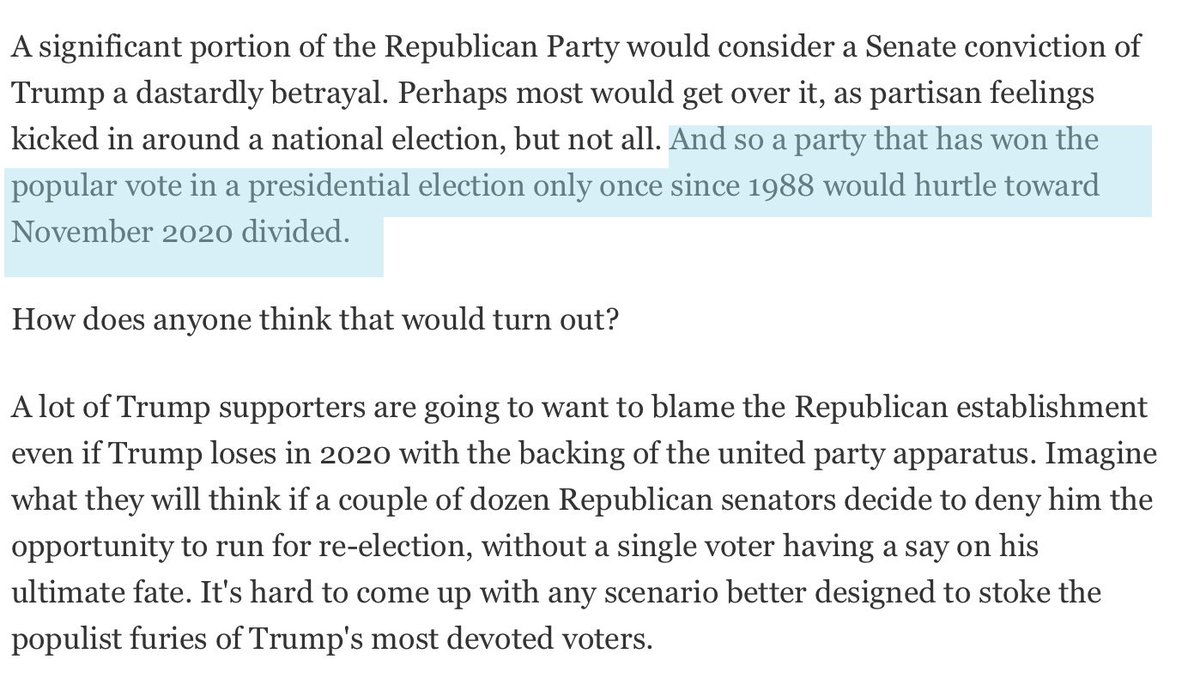 13/ Regardless of what happens in the Senate trial, it's all about November 2020.

What we should all be doing is what Kim is doing👇

We’re the “demos” in “democracy”

Exactly. It was both honest and revealing. @RickIsmach

All my threads are also blog posts. You can see this one here.  https://terikanefield-blog.com/trump-operates-by-putting-people-in-fear/ …

This is an interesting point. Thanks

Another thought to add about fear changing the brain: This also accounts for how Fox pulls people in and hooks them.

I think we've all noticed how many NRA / Trump supporters seem fearful in general.

Another [obvious] thought to add to this thread: The Ukraine scandal also involved putting Zelenskyy and the Ukrainian people in fear.

This is why "shakedown" is such a good description. That, and standard mafia tactics.