The destroyed compound visible in the video was built somewhere in early 2018, satellite imagery shows. The location of a large pit is later covered by the building.

Here's some insight in how the location of the video can be verified. First, I took several stills of the video as it pans, and stitched them together. This gives a better understanding of the surroundings such as buildings and hills. 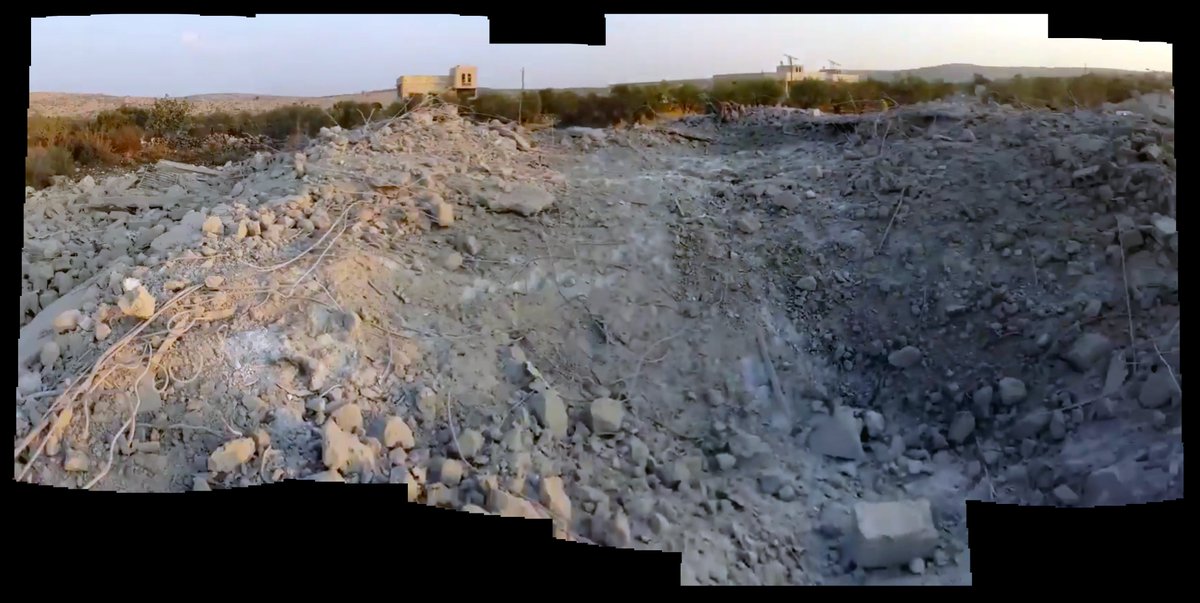 Second, Barisha seemed like a good place to start because several Twitter and Telegram reports referred to it as the place of an ongoing raid. Here's one of the earliest mentions I could find of helicopters crossing into Idlib from Turkey. It was sent at 11:09 PM local.

The time of 11 PM local as the start of the raid coincides with what local sources told @Elizrael. At least two different videos of apparent helicopter gunfire were shared on Telegram and Twitter. I haven't been able to verify these as not much is visible.

These reports were also noted by @ryanmofarrell, who started to look around Barisha on Google Maps. He found, as mentioned above, these buildings that “stuck out”. Just speculation.. but the aftermath video can be matched with that exact location. 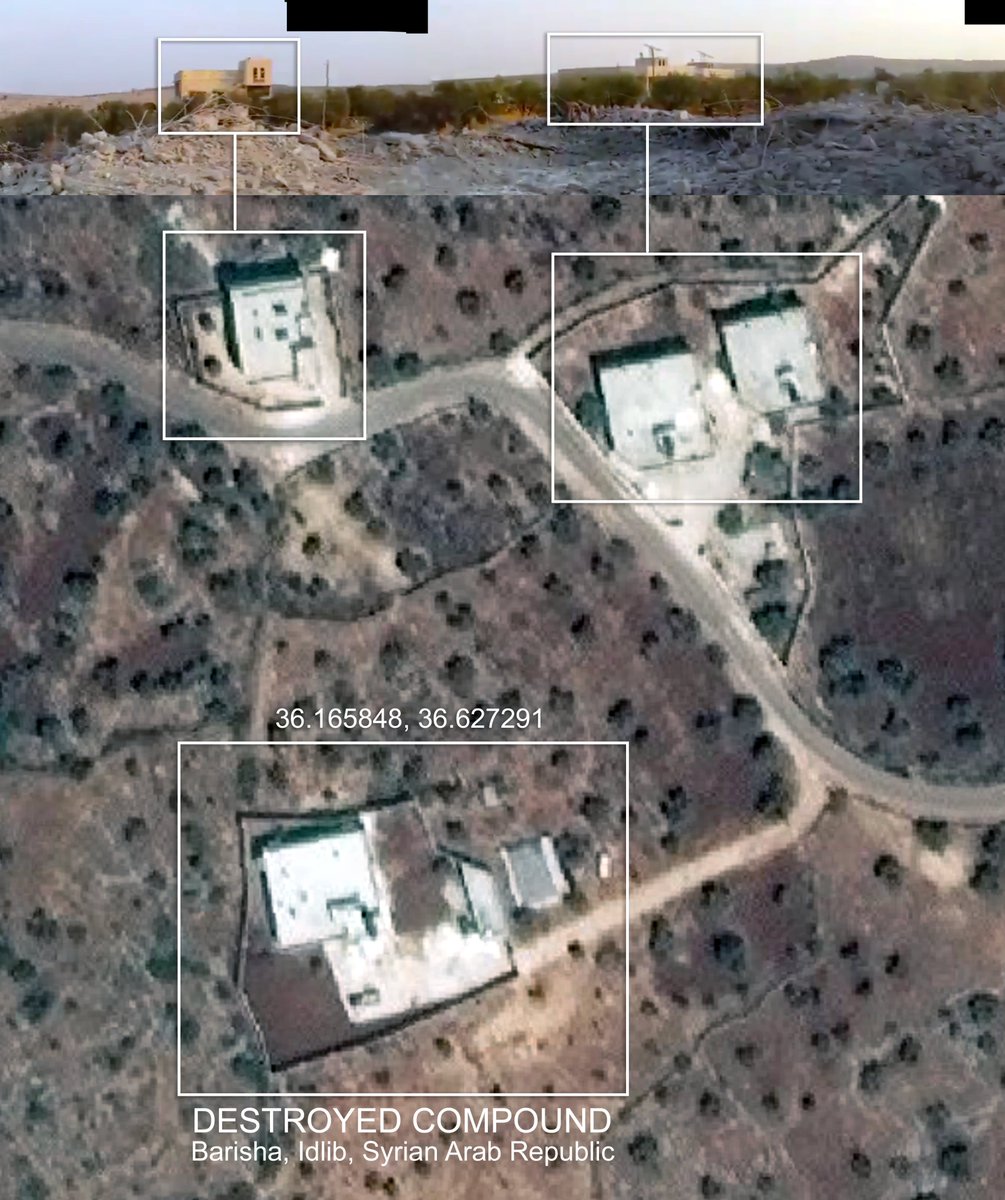 Here's a second aftermath video during dawn. It's showing the same, completely levelled compound near Barisha. This is slightly earlier than the video above, judging from the light. H/t @bdrhmnhrk @CalibreObscura.

I've seen contradicting reports about the duration of the raid, but we'll probably know more when President Trump addresses the nation. For what it's worth, he tweeted this roughly 4½ hrs after the first local report of helicopters crossing into Idlib.

(For the open source investigative folks reading this, what fascinates me is that @ryanmofarrell found an interesting location on satellite imagery BEFORE any ground footage came out — and that location turned out to be exactly where it happened.)

The location raided by members of the Joint Special Operation Command's Delta Team “had been under surveillance for some time” and was “taken out with an airstrike in order to prevent the site from becoming a shrine to the leader.“  https://www.newsweek.com/trump-approves-special-ops-raid-targeting-isis-leader-baghdadi-1467982 …

First post-strike satellite imagery of the raided site, per @planetlabs.

“According to local residents, the buillding was owned by a man known as Abu Mohamed al-Halabi [..] HTS sources said he was a well-known figure in Hurras al-Din, a lesser-known al-Qaeda offshoot started by disgruntled former HTS leaders.”

We've verified that this video shows an American airstrike destroying the compound in which Abu Bakr al-Baghdadi was found. It was filmed from a rooftop around 700 meters away, in nearby Barisha. (w/ @malachybrowne @evanchill)  https://www.nytimes.com/video/world/middleeast/100000006791542/trump-announcement-isis-leader-caught.html …

Here's the airstrike seen from above, as “U.S. special operations forces deploy precision munitions from a U.S. remotely piloted aircraft”. It completely destroyed the compound in which Baghdadi had been staying.  https://www.dvidshub.net/video/718664/us-forces-employ-precision-munitions-destroy-compound-and-its-contents …

The clearest image I've seen so far from Baghdadi's hideout before it was completely destroyed. Seems the image (still from a feed) was taken after the raid had started, given the damage to the building and the hole in the compound's wall next to the entrance gate. 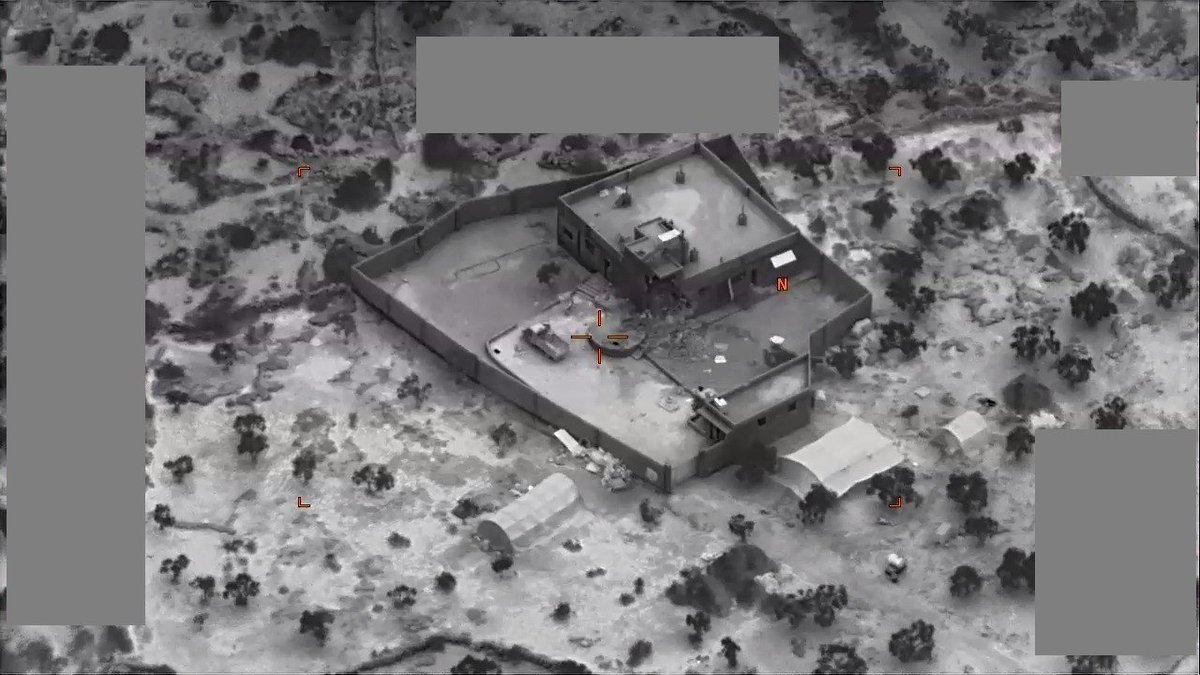 The so-called Islamic State has confirmed that Baghdadi is dead. And announces a new caliph.

A day after Baghdadi died, the spokesperson of the Islamic State was also killed ( https://www.nytimes.com/2019/10/27/world/middleeast/al-baghdadi-successor-reported-killed.html …). This has now also been confirmed by IS.