Argh, not this again. Put simply, what Warren was doing is (1) why mesothelioma victims can still get compensation despite asbestos company bankruptcies and (2) why debt collectors can't keep chasing people after bankruptcy. Both are pro-consumer.

I already did one of these threads when WaPo had a similar 'Warren worked for big corporations!' story. You can find that here. Contrary to the NYT's claims, her thinking here is hardly "unexamined," she wrote the seminal article on it in 1987.

It shouldn't be, but sometimes law is a game, where the result depends on who had more lawyers, who made more noise, or a judge's inclinations on ambiguous issues.

I can tell you from experience: the more games there are, the better it is for big corporations and the wealthy.
/3

This is better for regular people, both as debtors and plaintiffs.
/4

The vast majority of bankruptcies are personal bankruptcies. Do you want a system where, after the bankruptcy is finished, a debt collector can hire some lawyers to make up enough of an argument to start debt collection again? I sure don't. Warren didn't either.
/5

On the plaintiff side, it is far better if the bankruptcy takes into account injured people who *might* file a lawsuit in the future but haven't yet. Think, for example, of a shipyard worker who developed mesothelioma in 2002 as a result of exposure to Johns Manville asbestos.
/6

Johns Manville went bankrupt in 1982. But, because potential future claims were taken into account in the bankruptcy, a trust was set up for those claims. It's still around today, still paying out claims for people who developed mesothelioma decades later.
/7

Let's look at CMC Heartland. Notice the point Warren makes about "those who face uncompensated injuries and for those who have other claims against the business." That's exactly right: letting someone sue post-bankruptcy means also ignoring those like them in the bankruptcy. /8 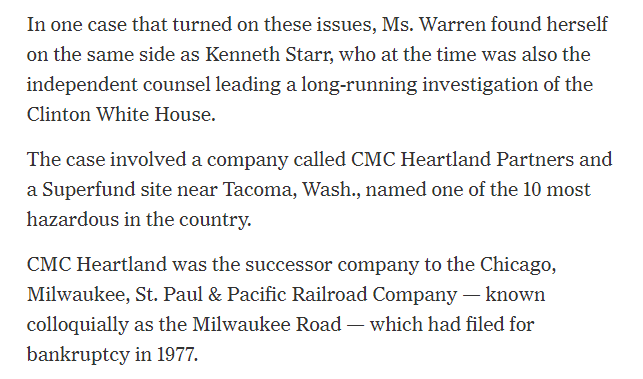 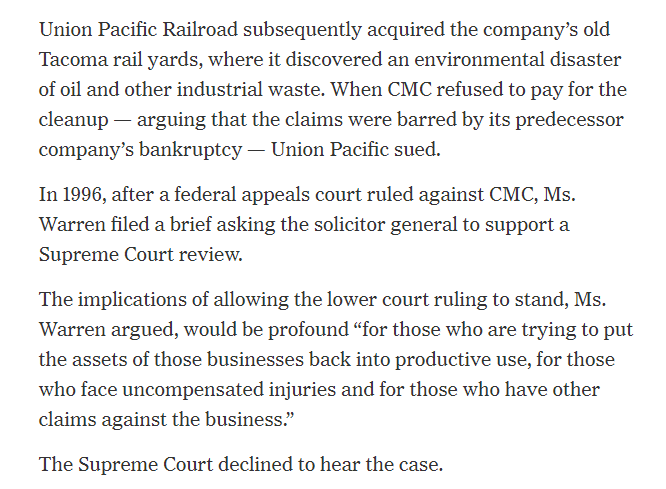 NYT's claim Warren "advocated for railroad company that wanted to avoid paying for a Superfund cleanup" is deeply misleading. Long after the bankruptcy, she urged the Solicitor General to join the railroad's bankruptcy argument, because it aligned with how the law should work. /9

Which would you prefer?

a) Polluting companies must set aside funds for all potential cleanup costs before leaving bankruptcy.

b) Potential future claims are ignored, and if filed later rise or fall on lawyer armies and judicial guesswork.

But let's not miss the forest for the trees. /11 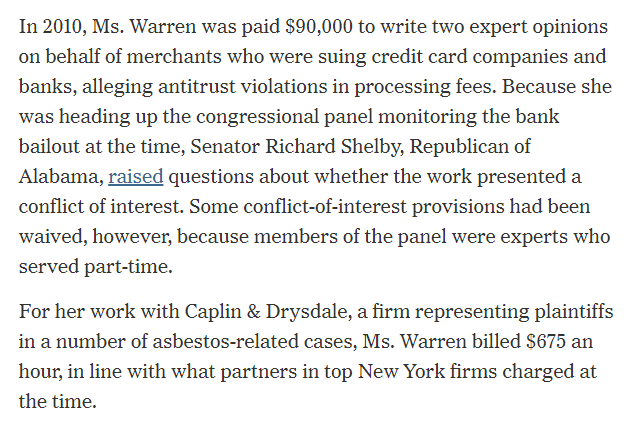 The big picture here is Warren's sustained, 30-year effort for an improvement in the law, one that benefits everyone generally and regular people in particular. In every case I've seen, she's consistently advocating for the same principle: a clean, fair bankruptcy process. /end

Addendum: I dove into the details of the "Big Cajun" case that was turned into some Michael Clayton-level intrigue by the NYTimes.

It is one of the most boring legal issues I have ever seen, and it is not anti-consumer in any sense.

Addendum 2: Here's a thread on what we know about Warren's work for Dow Corning.

Please don't make me do this again, this has been quite enough bankruptcy law.

Addendum 3: I don't want to explain LTV. Go read @CreditSlips's post from years ago. Same issue as the railroad, Fairchild aircraft, and Piper: ensuring future claims are dealt with in the bankruptcy, rather than left to post-bankruptcy legal games.  https://www.creditslips.org/creditslips/2012/10/elizabeth-warren-ltv-steel.html …

Like I described in the thread above: the most notable thing about @ewarren's legal work is her consistently principled stance when deciding whether or not to take matters.