Did you miss the federal court ruling last week stating that the House’s impeachment investigation was legal and legitimate even without a formal vote by lawmakers?

The judge also held that the White House is “openly stonewalling” Congress.

Andrew Napolitano can explain to you that the House Democrats have been following the rules written by Republicans in 2015. See:

2/ If you read Pelosi’s letter carefully, you’ll see that Thursday’s vote— far from backpedalling—signals that the impeachment inquiry is rapidly moving forward.

Shall I break down Pelosi’s letter for you?

Thursday the House will vote on a Resolution that will do 4 things. 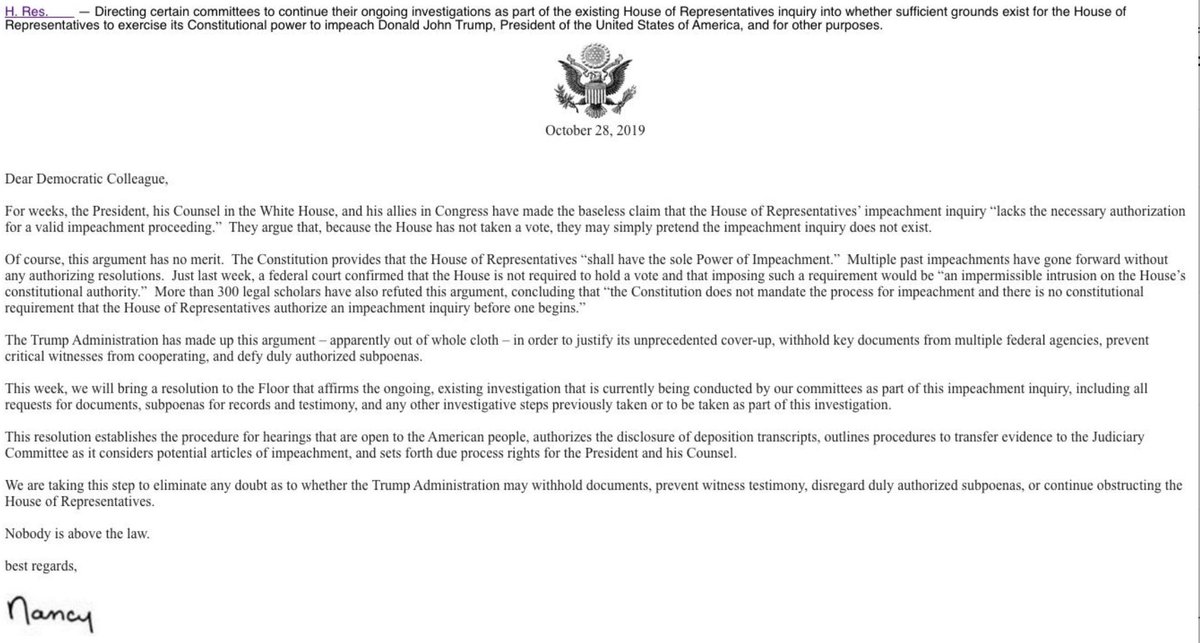 3/ First, the Resolution will establish the procedure for public hearings.

This means the House basically decided it has enough evidence and will soon be ready for the next stage.

We're about to find out the structure and procedure for the public hearings.

4/ The NYT reports that the rules will allow for staff aides of the House Intelligence Committee to question witnesses directly. This means the questioning will be done by experienced lawyers. This should allow help the truth come to light.

Second, the Resolution will authorize the disclosure of the deposition transcripts

Now you’ll get to see everything the witnesses have been saying.

6/ Third, the Resolution will outline the procedures to transfer evidence to the Judiciary Committee as it considers possible articles of impeachment.

As I'm sure you know (since you're so well versed with the rules), since being formed in 1813, the Judiciary Committee has. . .

7/ . . . jurisdiction over impeachments. They decide what it means. They also draft the Articles of Impeachment.

That means Articles of Impeachment are coming soon!

8/ Finally the Resolution will set forth due process rights for the president and his counsel.

Due process in this case means due process appropriate to an impeachment inquiry.

I don’t expect these to be the same due process rights a criminal defendant is afforded.

9/ The reason for the letter is to “eliminate any doubt” as to whether the Trump administration can continue obstructing the House inquiry.

A reminder: President Trump never denied any of the facts.

He says there was nothing wrong with what he did.

All my threads are also blog posts. This one is here:  https://terikanefield-blog.com/dear-congressman-mccarthy/ …