Here’s his statement:
https://static.politico.com/69/13/cdffb8a4420a8a4d8a65439570f2/vindman-statement-final.pdf …
Vindman served multiple tours as Infantry officer, was wounded in Iraq and awarded a purple heart.

1/ Since 2008 Vindman has been a foreign area officer specializing in Eurasia.

Since July 2018, he served at the National Security Council.
He reports to Fiona Hill, who reported to Bolton.

From his statement: Zelenskyy was seen as a unifying figure in Ukraine. . .

2/ . . . as the first candidate to win a majority in every region. He ran on a platform of unity and anti-corruption.

April 21: Trump called Zelenskyy to congratulate him on his election victory.

Vindman listened to the call, which was positive.
Trump extended a WH invitation.

The meeting went well until the Ukrainians mentioned the White House meeting, which they saw as critically important to solidify US support.

4/ Sondland talked about Ukraine delivering specific investigations “in order to secure a meeting with Trump.”

After the meeting was a scheduled debriefing.

Once more, Sondland emphasized the importance of Ukraine delivering investigations. . .

Vindman pushed back against this.

Hill then entered the room and told Sondland that his statements were inappropriate.

If you're thinking, "Wait! This contradicts Sondland's testimony," 🤔 you're right!

Vindman says that both he and Hill both reported their concerns to the NSC’s lead counsel. 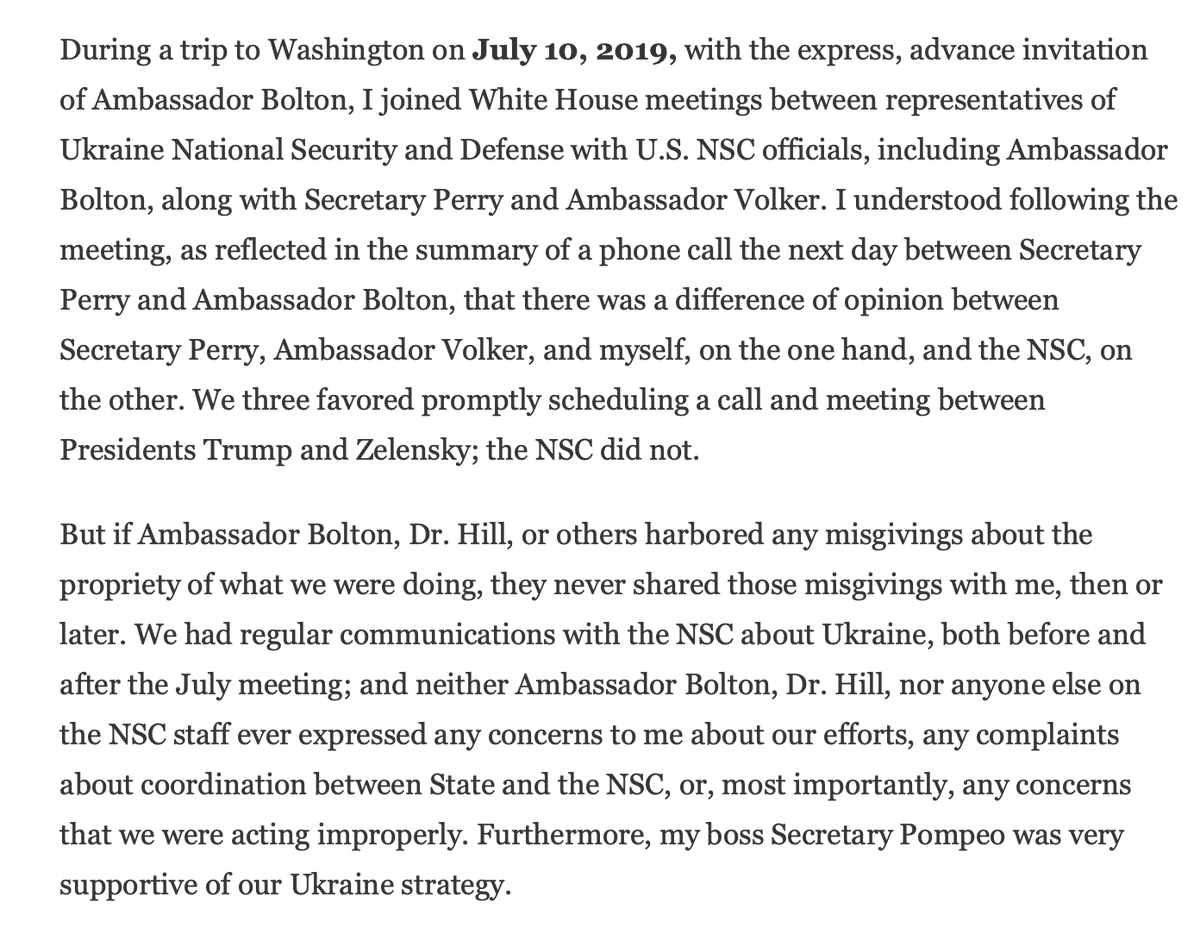 7/ The NSC proposed that Trump call Zelenskyy to congratulate him.

The now-famous call happened on July 25.

Vindmann listened in on the call in the Situation room.

He didn’t think it was proper to demand that a foreign government investigate a US citizen.

9/ @deepakguptalaw thought the GOP would have a hard time attacking a White House official and U.S. Army lieutenant colonel and a Purple Heart recipient wounded in Iraq 👇


@deepakguptalaw naively underestimated the danger and creativity of the GOP.


We all have our chilling moments when we confront the reality of today’s Fox-Trump-GOP.

The difference between the 3 Amigos and Vindman?

From Ingraham: Vindman was working “against the president’s interests” while “working in the White House."

12/ Notice Ingraham said “the president’s interests,” not the interests of the US.

Right there on Fox.

What’s really going on here is a tug of war over Ukraine:
Ukraine wants to align itself with Europe. It wants rule of law and democracy.

That’s why they elected Zelenskyy.

13/ Russia wants Ukraine to be part of Russia.

Vindman (and the others marching in to Congress to testify) want to enable Ukraine to embrace democracy and rule of law.

This may still come as a shock to people, but the Trump-FOX-GOP is siding with Russia.

14/ Manafort was working in Ukraine on behalf of Putin.

That’s why the Trump-FOX-GOP worked so hard to dunk the Mueller report.

They can’t tell the truth because they know the idea that the U.S. should align itself with Putin instead of NATO would shock most Americans.

For more on why the most radicalized part of the Fox-Trump-GOP is on Russia’s side, see:


Get ready for a lot more lying.

Yes. I don't think it's an accident that @SpeakerPelosi keeps repeating that.

It all ties together: Manafort, Trump, Russia, Ukraine.


The beauty of the Ukrainian scandal is that it's easy to grasp and fits into soundbites.

All my threads are also blog posts. This one is here:  https://terikanefield-blog.com/more-on-the-fox-trump-putin-love-affair/ …