BREAKING NEWS: Evidence Emerges That Convicted Felon and Ex-Trump National Security Adviser George Papadopoulos May Have Had Foreknowledge of Attack on House Oversight Committee Vice Chair Rep. Katie Hill, An Attack That Quickly Opened Up Her Congressional Seat for Him to Run For

PS/ I don't know of one Democrat who wasn't immediately suspicious when one of Trump's top critics in Congress and on the House Oversight Committee suddenly found herself in the crosshairs of oppo research just as the most damaging impeachment evidence was emerging against Trump.

PS3/ What I will say, and wrote of in PROOF OF CONSPIRACY in addition to discussing Papadopoulos' contacts and ties to Israelis and Saudis, is the Saudis look to have used Israeli technology to hack the phone of Trump critic Jeff Bezos to access nude photos.

Echoes of that here.

PS4/ While in this case the allegation made by Hill herself is that the photos came from her ex-husband, remember that in the Jeff Bezos case there *also* was a person associated with the victims who initially was said to be the source of the photos. Then it got more complicated.

PS6/ It may well be that there'll come a time when Rep. Hill would need to resign her seat on the basis of having violated Congressional regulations about relationships with subordinates (regulations I very much agree with), but I wonder if for *now* she should stay in Congress.

PS8/ Why was a guy who may have had foreknowledge of the attack on Rep. Hill talking publicly about Republicans "getting even" three days ago? 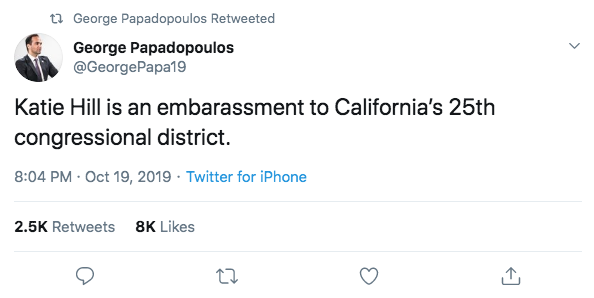 PS11/ And *twelve* days ago Papadopoulos held an event in Florida to endorse the Trump 2020 campaign.

PS13/ A suspicious person might feel Papadopoulos' 10/17 endorsement of Trump in front of 2,500 people in Florida was timed to coincide with the release of the Red State article a day later, given the former event essentially launched his Congressional campaign as a pro-Trumper.

PS14/ Again, no theory here, just thinking that something feels off in all of this.

PS15/ Hopefully Hill's ex-husband will at some point be willing to chat with someone—whether media, law enforcement or otherwise—about whether he was at any point approached by any third party regarding the release of these photographs. Of course he may have his own legal issues.

NOTE/ NYT (August): "A loose network of conservative operatives allied with the White House is pursuing what they say will be an aggressive operation to discredit news organizations deemed hostile to President Trump by publicizing damaging information. 🧐  https://www.nytimes.com/2019/08/25/us/politics/trump-allies-news-media.html …

NOTE2/ When I read that NYT story less than 60 days ago, I immediately wondered why *anyone* involved in this opposition research campaign connected to the White House would stop at "journalists." Why not Trump critics in *Congress*, too, I wondered? And now I *really* do wonder.

NOTE3/ Papadopoulos has always had ties to the fringe Trumpists who peddle conspiracy theories and libel against Trump critics—we can think of it as the "Jacob Wohl crowd." Can anyone really have *confidence* none of these folks was looking into/at Rep. Hill from House Oversight?

NOTE4/ POLITICO says that Rep. Hill (@KatieHill4CA / @RepKatieHill) is *not yet resigned*. I don't know if this is accurate, and I understand Pelosi has already endorsed Hill's resignation, but I don't know...you *don't* want to resign and then learn the whole thing was a set-up.

NOTE7/ I have to say: 700 pictures being dumped to the media all at once doesn't exactly sound like an ex-husband running the show. The profile doesn't fit; someone who knew the victim would select the photos to leak. This feels like a wholesale... hack of a cell phone, honestly.

NOTE8/ I believe Congressional ethics regs should be upheld—in *all* instances, e.g. Duncan Hunter—and that relationships with subordinates are 100% wrong. I *also* have a *lot* of questions for Joe Messina, George Papadopoulos, Kenny Heslep, and the NRCC reps Messina spoke with.

NOTE9/ I mean, The Daily Beast says that "conservative website Red State published photos that reportedly came from the Facebook page of Hill's estranged husband Kenny Heslep," but now a Playboy reporter says that Messina had *700* photos of Hill. Uh...all from Heslep's Facebook?

NOTE10/ I suppose it's *possible* 700 (700!) pics—including nudes (nudes!)—could've originated on a single Facebook account, i.e. been uploaded there *before* there was an intent to weaponize them, but... really? Seems more like data taken from elsewhere and uploaded all at once.