So you’re considering adopting this strategy: “Trump did it, but there was nothing wrong with it.”

You DO realize this strategy helps create an American Mafia state, right?

1/ Your vote after the trial becomes your legacy. Everyone will know what you voted for.

So, you ask, how does this connect to Trump's defense?

1/ Neither Trump nor Giuliani ever denied the underlying facts.

Giuliani openly admits he was in Ukraine to dig up info to support the harebrained theories that the real election interference in 2016 came from Ukraine on behalf of the Democrats . . .
https://www.nytimes.com/2019/05/09/us/politics/giuliani-ukraine-trump.html …

2. . . . that the Bidens behaved corruptly in Ukraine, and that the hacked DNC “server” is being hidden in Ukraine.

Heck it was widely reported at the time.  https://www.nytimes.com/2019/05/09/us/politics/giuliani-ukraine-trump.html …

Giuliani also explained why he was in Ukraine to support Trump’s harebrained theories.

3/ Giuliani says he was performing his duties as Trump’s personal lawyer, to “vindicate his client” by looking for “evidence to defend” his client⤵️

He was just being a zealous advocate! 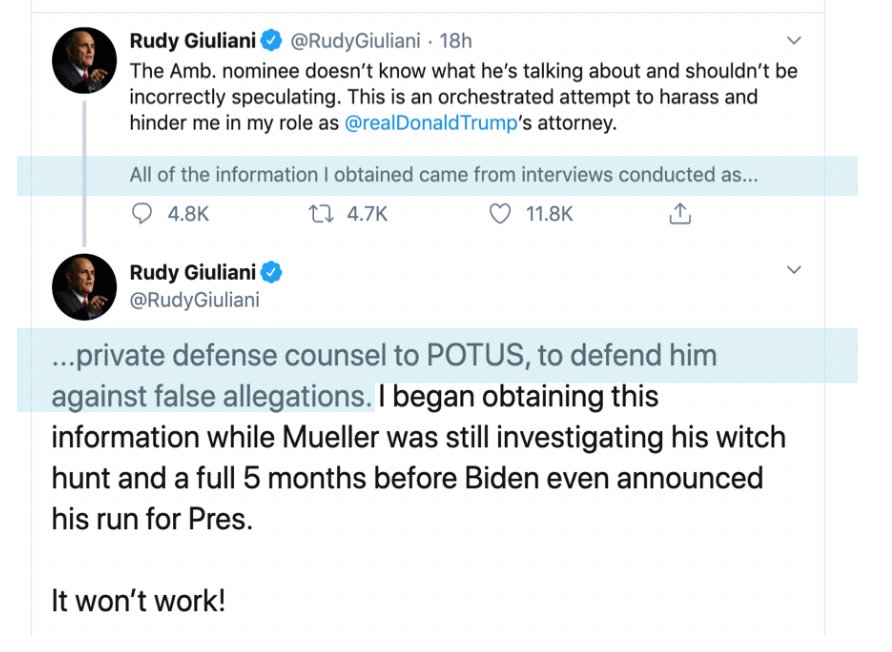 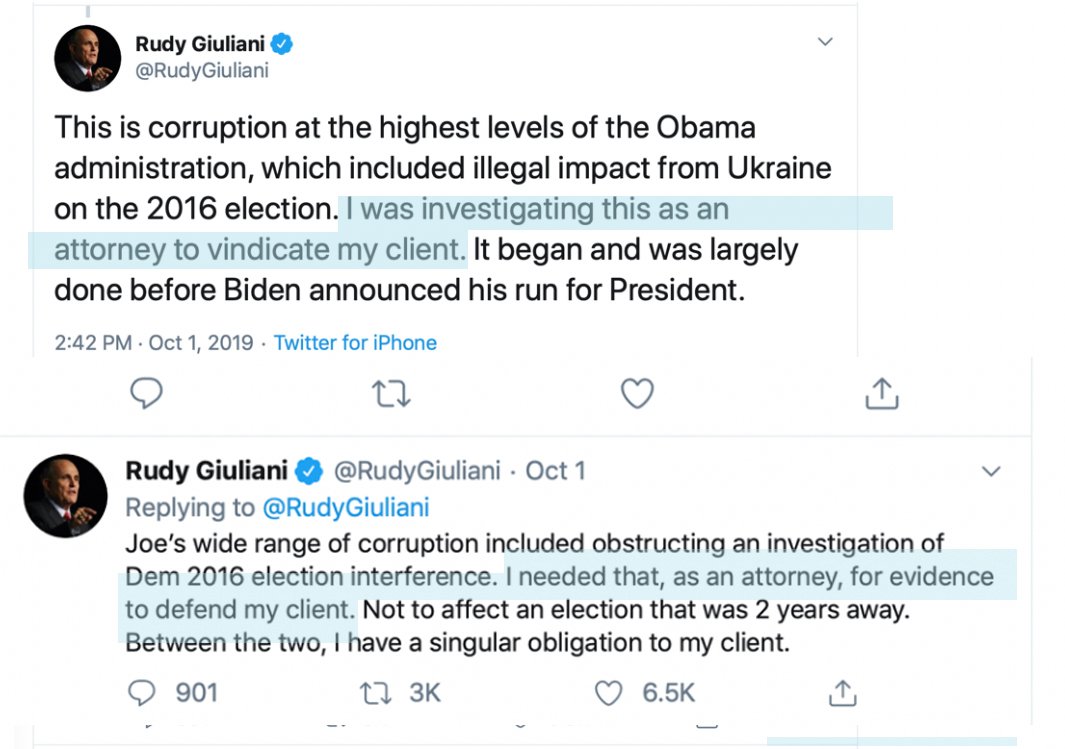 4/ Giuliani also admits that he used the levers of government to get the Ukrainians to launch the investigation that would “vindicate” his client.

After saying he worked with the State Department, he said he doesn’t care what Pompeo thinks of his job performance because, “I am the president’s lawyer.”
https://thehill.com/blogs/blog-briefing-room/news/463340-giuliani-state-department-official-should-step-forward-i-wasnt …

6/ Trump also admits to the facts of the phone call when he asked Ukrainian Zelenskyy to investigate his theories.

7/ In fact, Trump thinks the phone call was so cool and so legal he wants to read it to the American people.

8/ @JRubinBlogger nails it when she says that Trump and Giuliani “cannot grasp that there is a difference” between conducting U.S. foreign policy for national security reasons and conducting foreign policy to benefit Trump personally.

9/ OK, so what does all of this have to do with a mafia state?

Hungarian scholar Bálint Magyar explains that we are “using the wrong language” to describe what Giuliani & Trump were doing.

What he can do, however, is destroy the institutions that traditionally conduct foreign policy.
https://www.newyorker.com/news/our-columnists/the-trump-administrations-war-on-the-government-is-an-autocratic-attempt …

11/ A mafia state is essentially a criminal government.

Mafia states—like Putin’s Russia—develop as the government takes over businesses.

The ruler consolidates power and wealth until the nation's wealth and power come to be concentrated in one person.

Eventually, the entire state comes under control of the head of the family and expands across the entire country.

In other words, the ruler ends up owning the country.

13/ When this happens, the ruler’s personal interests and the interests of the nation become meshed into one.

“Rule of Law” becomes “Rule of the Rulers.”

Trump has been open about his admiration for Putin, the head of a powerful mafia state.

14/ Trump often acts like a mafia don. See the NBC Op-Ed I co-authored with @glennkirschner2 ⤵️

Trump and Giuliani are operating as if Trump is—or owns—the United States.

15/ That's why they think they can use the levers of government to advance Trump's personal interests.

Yup, I realized that after it was too late to fix it.

Those halloween demons are still haunting my keyboard.

Chilling point.
This is why impeachment and removal is appropriate when a president is beholden to a foreign power.

Being propped up financially by Putin isn't a crime: it is only dangerous when the President or other US officials do it.

Aaand he winner🏆 is @tayas59

uh, that should have been "the winner"

Meanwhile, all my threads are blog posts. This one is here:  https://terikanefield-blog.com/a-mafia-state/