Wouldn't it be great if PROOF OF CONSPIRACY—which lays out Donald Trump Jr.'s crimes—re-entered the New York Times bestseller list ahead of Trump Jr.'s TRIGGERED?

I'm just saying that if this tweet got enough retweets, we could probably make that happen.  https://www.amazon.com/Proof-Conspiracy-International-Collusion-Threatening/dp/1250256712 …

PS/ In the event anyone reading this needs more motivation to participate in this challenge by retweeting my pinned tweet—the tweet this tweet is connected to—I humbly offer the following tweet, trash-talk, and photo from @DonaldJTrumpJr.

Let's show him a thing or two, shall we? 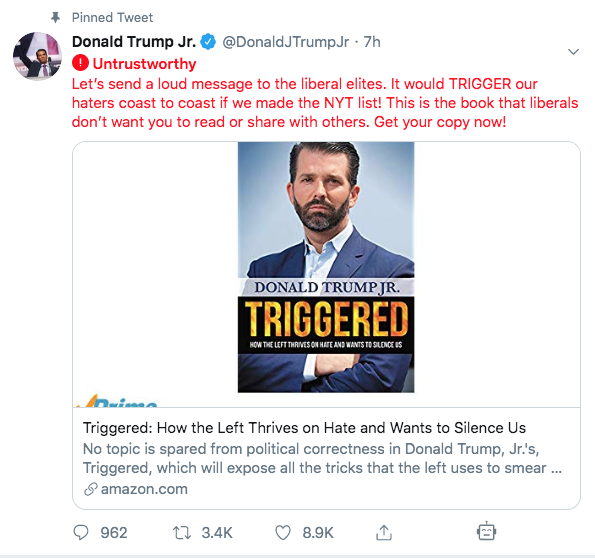 PS3/ The more I think about Don Jr. in a pre-faded lumberjack costume sitting on a stump in the middle of The Haunted Forest the more I think:  https://www.youtube.com/watch?v=pi_HiInBipc …

PS4/ So @DonaldJTrumpJr has 4.2K retweets in 20 hours; my pinned tweet re: passing Jr.'s book in the NYT bestseller list has 3.3K retweets in 13 hours...despite this feed having *3.2 million fewer followers* than Trump Jr.'s. Amazing work, all! And I still think we can catch him!

PS5/ My pinned tweet—which asks readers to retweet a link to PROOF OF CONSPIRACY so it can land ahead of Trump Jr.'s book TRIGGERED on the NYT bestseller list in mid-November—has 4,600+ retweets now, the same as Trump Jr.'s.

PS6/ So @realDonaldTrump has just tweeted about his son's flagging book—which drops tomorrow—taking it from #100 on Amazon to #10. PROOF OF CONSPIRACY is ~#3,500 and climbing, but it'll take a lot to pass Trump Jr. on Amazon now that Don's dad has weighed in to rescue TRIGGERED.

PS7/ If you want amazing insights like "JFK would be alt-right today," or 261 misspellings of the Democratic Party as the "Democrat Party," *do* buy Trump Jr.'s ghostwritten book of rich-kid pap, TRIGGERED. Or you could retweet my pinned tweet, and we could give him a *surprise*.

PS8/ If you like books whose promotional campaign violates the Hatch Act by using the Office of the President to enrich the president's family, TRIGGERED is the book of sixth-grade party jokes for you. If you like books that *reveal* crimes by POTUS, go with PROOF OF CONSPIRACY.

UPDATE/ We have *blown apart* Trump's retweets—by nearly 2,000!—in 8 hours less time than Jr. had his tweet up, even though Jr. has 3.2 million more followers than this feed. Outselling him will be harder but not impossible. PROOF OF CONSPIRACY is climbing dramatically on Amazon.