I read it, and I’m ready to Tweet my notes and impressions.

Nov-Dec: 2018: Yovanovitch became aware Giuliani was trying to make contact and communicate with people in Ukraine.

1/ People in Ukraine knew why Giuliani was meeting with Lutsenko, because Lutsenko was talking freely about it.

In February, a Ukrainian official, Avakov, told Yovanovitch she needed to “watch her back” because Giuliani was looking to “hurt” her in the US.

2/ She learned about Parnas and Fruman’s financial business in a Ukrainian energy company and assumed her anti-corruption efforts was hurting their financial interests.

Giuliani reached out to Avakov, but Avakov didn’t meet with Giuliani. He was afraid it would be "dangerous.”

3/ Avakov knew of Giuliani’s personal connection to Trump, and was afraid of getting involved in U.S domestic politics and losing bi-partisan support in the US.

She was asked why such a meeting would be dangerously "political." Her answer ⤵️ 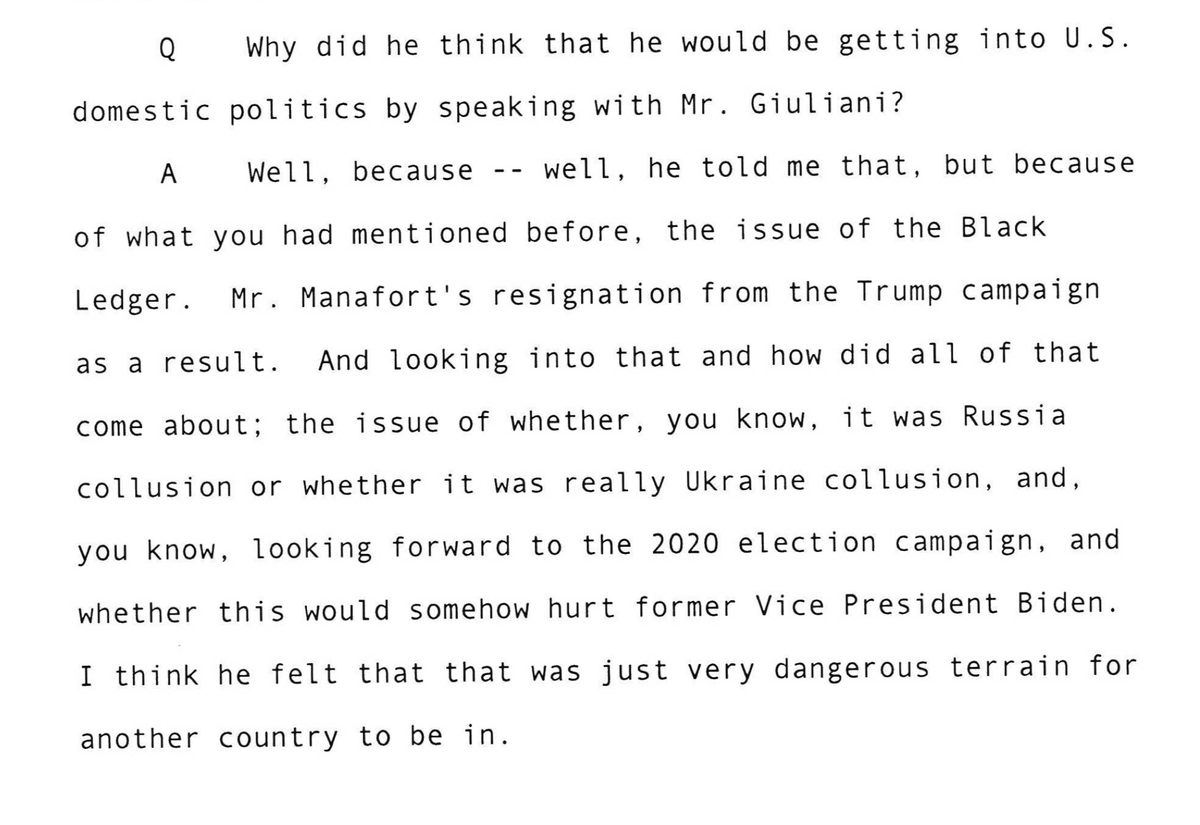 4/ If you forgot what the Black Ledger was that resulted in his resignation from the Trump Campaign, see:  https://www.nytimes.com/2016/08/15/us/politics/paul-manafort-ukraine-donald-trump.html …)

She also mentioned the $40 billion that former president Viktor Yanukovych and his cronies absconded with. Ukrainians want to look into . . .

Yovanovitch explained that historically, the prosecutor’s office—a holdover from Soviet days—was a hotbed of corruption; cases were investigated or prosecuted based on how much money changed hands.

6/ She said Lutsenko was supposed to reform the office, but didn't.
He wasn’t happy that the embassy kept calling for him to clean up the prosecutor’s office.

The goal—what most Ukrainians wanted—was to end corruption and fully transition Ukraine to a rule of law country.

7/ Late March: She learned that Lutsenko talked about opening an investigation into the Bidens.

The State Dept. issued a strong statement that Lutsenko’s allegations were not true.

She believes he was an opportunist hoping for an endorsement from Trump to keep him in power.

8/ About the Burisma case: she explained that it was never closed. Even though the allegations were unfounded, it remained “dormant.”

This was part of the corruption of the office. Cases were not closed in the event that the investigation was needed as a political weapon.

She asked the Secretary of State for a statement that she had the backing of the US. 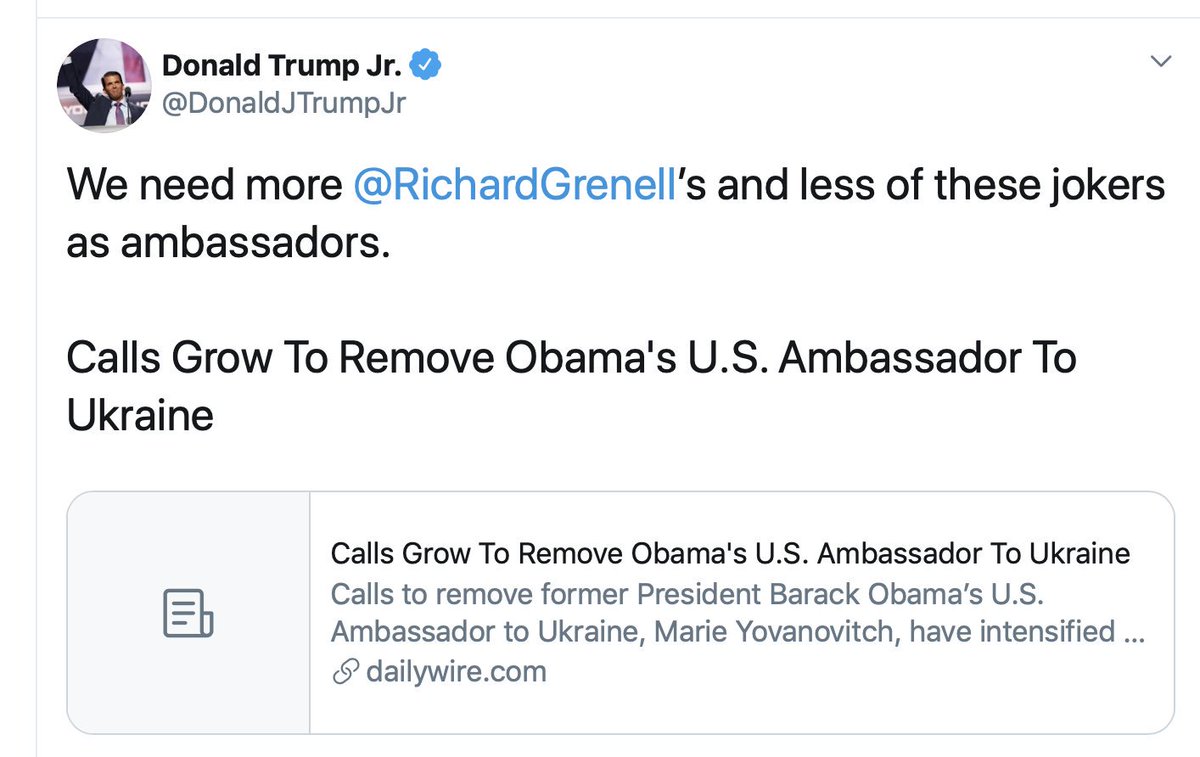 10/ Sondland advised her how to respond to the smears. He said she should tweet out a public statement that she supported President Trump.

She didn’t because she didn’t think it would be appropriate.

Notice: If you want to keep you job, you must declare your loyalty to Trump. 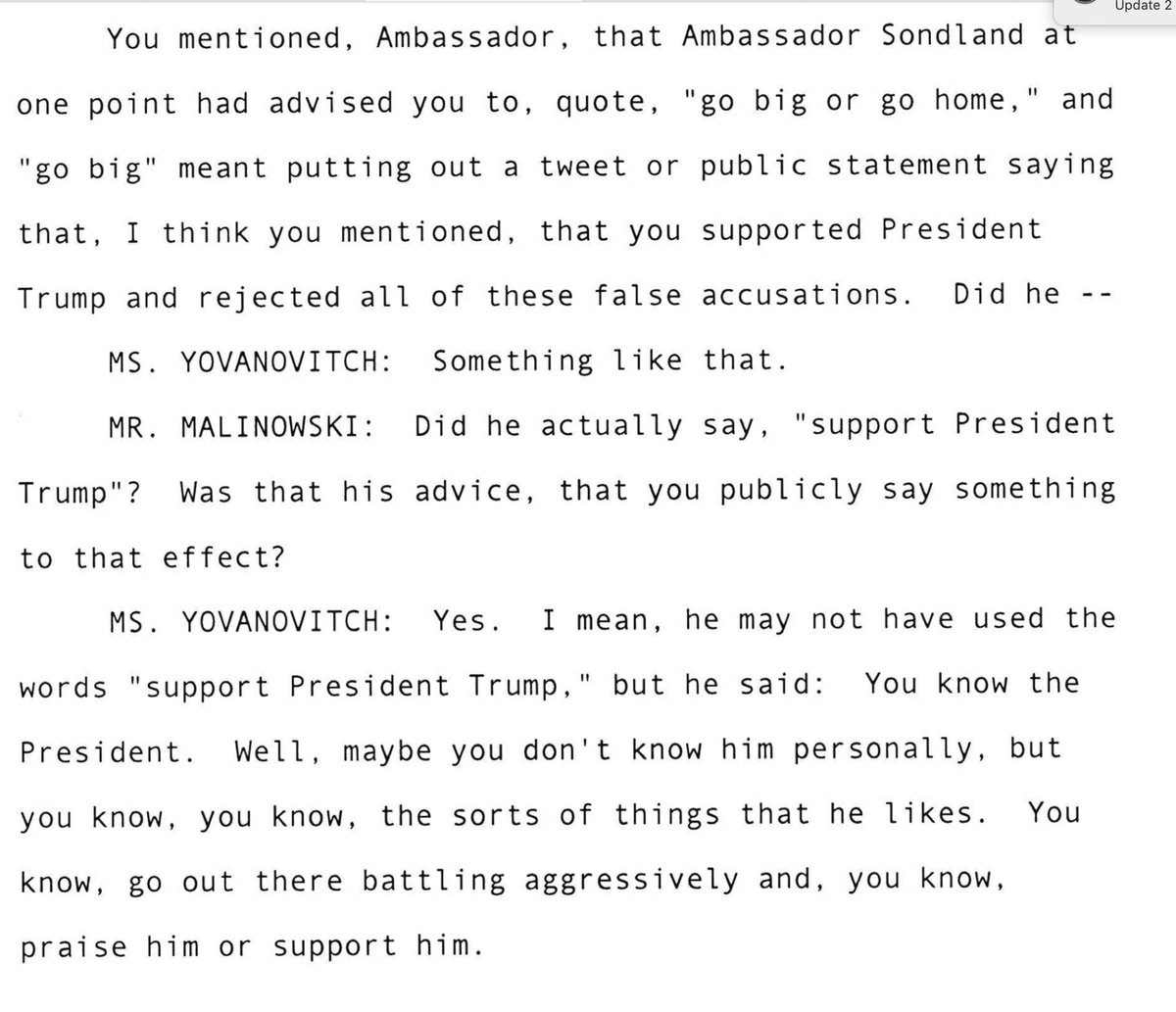 Who would pull out the rug?

12/ She was also told by Phil Reeker that the Secretary or someone around him was going to call Sean Hannity to ask if he had proof of the allegations against her .

She knows the call took place, but doesn’t know what was said.

13/ When she was fired, she was told she had to return “immediately” on the next plane for her “security.”

She was also told that there was no “cause” for her dismissal; it came from Trump. 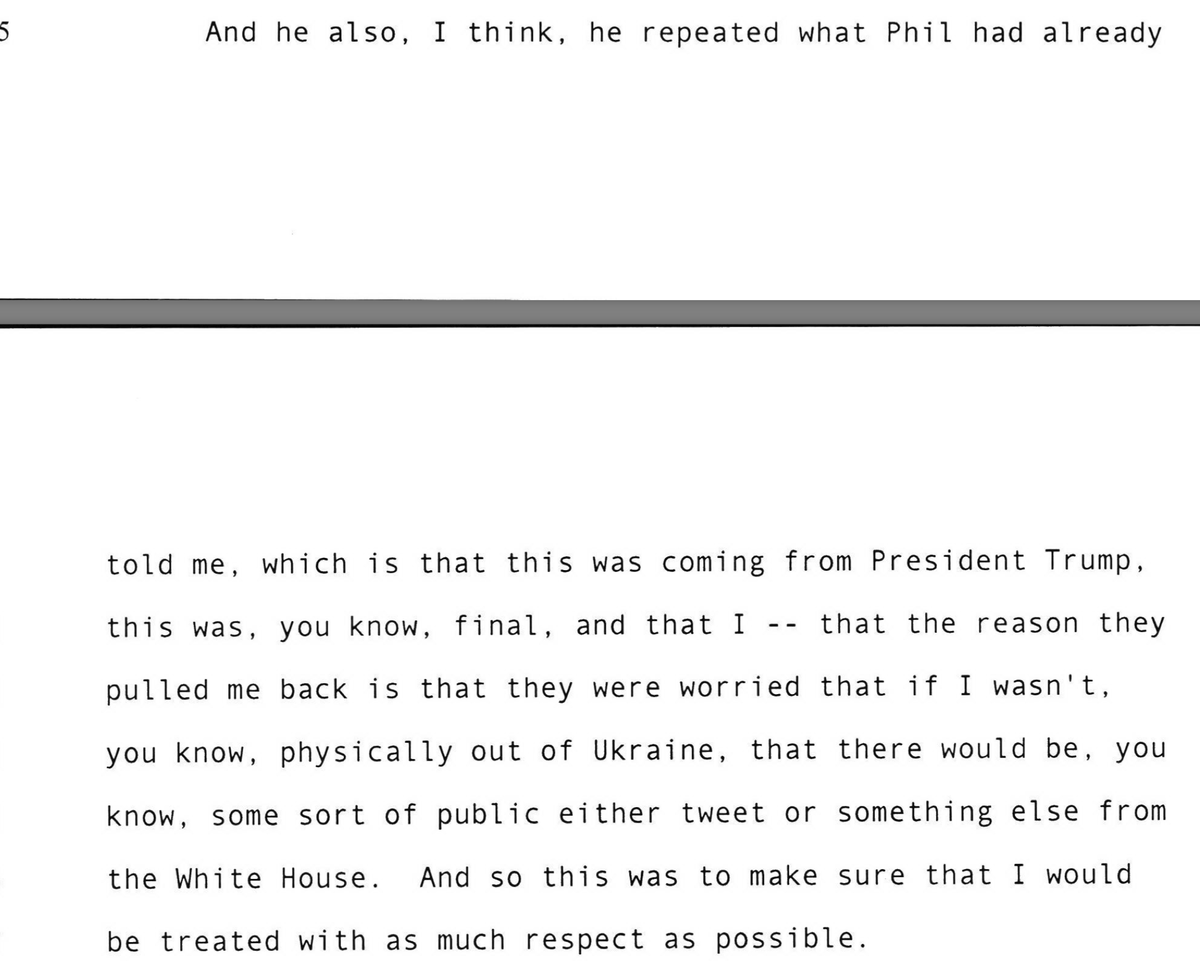 14/ For 33 year, her performance evaluations had been good, and she was steadily given increased responsibility.

She worried what message this would send about their position on anti-corruption.

Elsewhere she said ambassadors shouldn't be selected based on private interests. 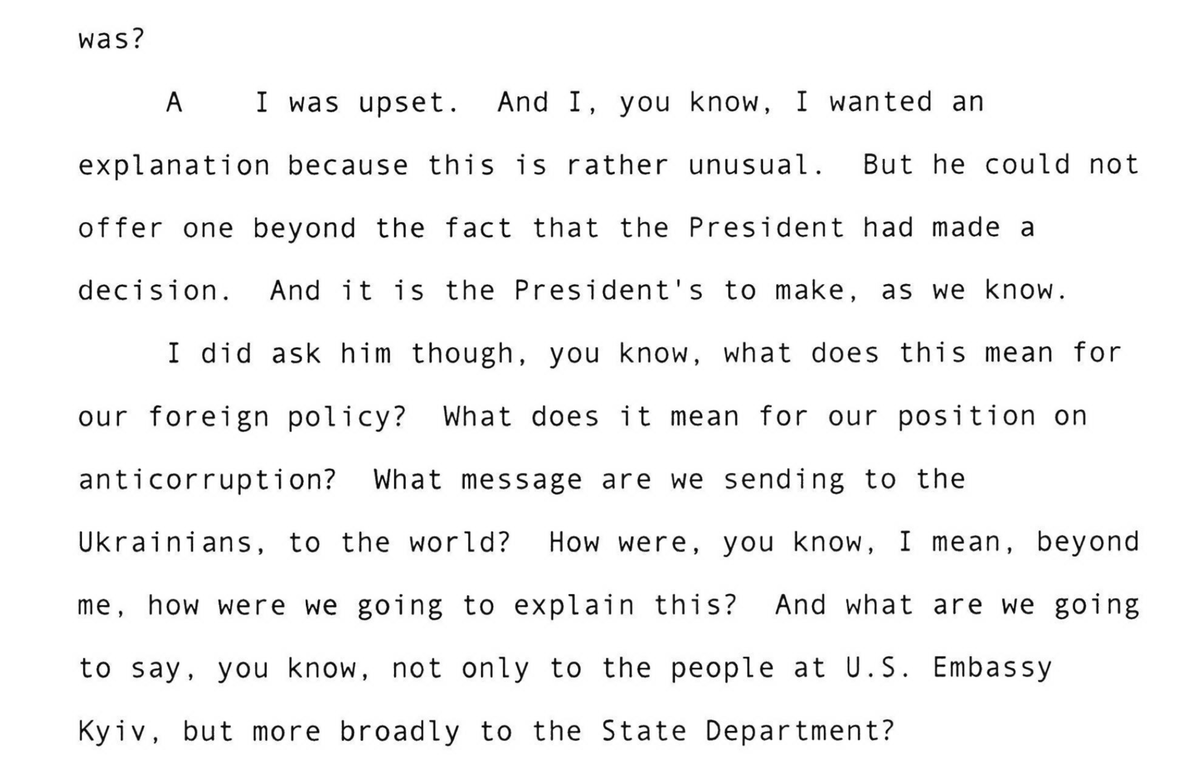 15/ On April 24: Giuliani went on Fox and Friends and said, “Keep your eye on Ukraine”

[Who want to bet that Schiff and Pelosi saw all this coming last spring?]

After she returned, she learned that Trump had wanted her out since July 2018.

16/ She testified that the White House meeting with Zelensky was important because “we are the most important partner for Ukraine,” establishing a relationship with the US president was “critical” for Zelensky.

17/ During the July 25 phone call, when Trump said about her that, “she’s going to go through some things” she felt threatened. ⤵️

The House Republicans made repeated pathetic attempts to get some testimony from her that would help Trump, but they couldn’t do it. 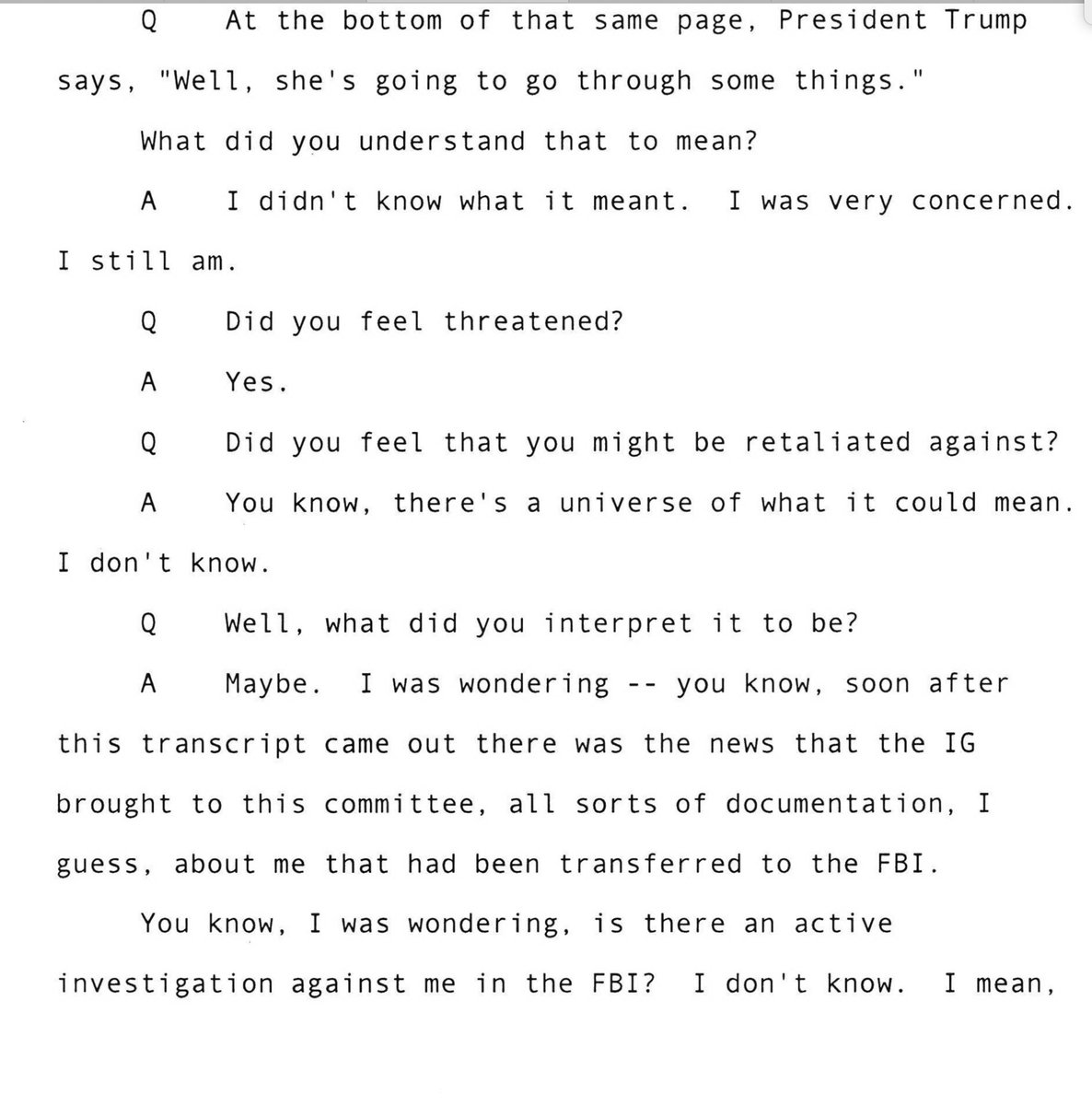 18/ To give one example, they seized on her testimony that Zelenskyy was a reformer who wanted to end corruption.

Then they read part of the July 25 Trump-Zelenskyy call to suggest that maybe she WAS corrupt, since Zelenskyy suggested it.

But then the Democrats. . .

19/ . . . established the context, that Trump was the one who said she was a bad ambassador; Zelenskyy just went along.

Remember a few days ago I talked about the mafia state?
I kept thinking about that as I read this deposition.

I worked my notes from Yovanovitch's testimony into my master timeline:
https://impeachment-trump.com

(Who is that nerd in the front row with 100 pages of color coded notes? 🙋‍♀️)

All my threads are also blog posts. This one is here:  https://terikanefield-blog.com/ambassador-yovanovitch-deposition/ …