In so many ways, the Democrats are gaining strategic advantages because of the Republican obstruction.

You say, “I order everyone to refuse to testify!”

Your friends do what you say. Your critics don’t.

3/ So, at the trial, only the people critical of you show up to testify.

Now, what did that accomplish?

4/ The House Republicans are trying in vain to get these witnesses to say anything at all favorable to Trump, but they can’t.

Because the witnesses who might defend him are obeying his orders and staying away!

💠Each instance of obstruction strengthens the impeachment articles

5/ The House is calling the obstruction a “cover up.”

Americans get a coverup.

People who are innocent don't try to hide evidence.

💠 A radicalized right wing is dangerous. People on the far right are talking about Civil War.

"Narrative" in this context means "the story they're trying to create.”

7/ WaPost reported that Democrats debated asking Capitol Police to physically remove them, but feared “such a dramatic move would play into Republican hands.”
https://washingtonpost.com/politics/trump-impeachment-inquiry-live-updates/2019/10/23/8a9b1fd8-f51a-11e9-8cf0-4cc99f74d127_story.html ……
The Democrats are being the adults in the room: Measured, deliberate, cognizant of the dangers.

8/ Imagine the optics that would have been created had members of Congress been forcibly removed.

Those are the kinds of optics the radicalized Republicans want so they can stoke fury and rage on the far right.

Don’t give it to them.

Be the adults in the room.

9/ There’s a wonderful scene in the children’s book, the Little Princess. A child is having a temper tantrum. Usually adults have strong reactions to her tantrums and frantically try to get her to stop.

The heroine of the story (another little girl) sits down on the floor. . .

I’m not saying the Republicans will stop. But reasonable people see them as—let’s just say—not the kind of leaders we want in a democracy.

11/ 💠The House Democrats are taking their cases of obstruction to court and getting strong rulings from federal judges in their favor.

This helps with articles of impeachment regarding obstruction (the "coverup")

The only way to get Results Right Now is in an autocracy. That's why some people are attracted to a Strongman.

Checks and balances, due process, taking care not to move too far ahead of public opinion— all of these take time.

13/ On a personal note, I have a deep aversion to punishment for its own sake.

I generally get blowback on Twitter when I venture into this territory, but here goes.

As a defense lawyer, I'll also say that I've never had a client whose defense was, "I was acting under orders from the US President."

It's not bad, a far as defenses go.

15/ Also, this, some wisdom from Harvard professor Levitsky, author of How Democracies Die.

Did you all see this:
The House Democrats are winning.

Why change a winning strategy?

Do we want people talking about how Congress fined the Secretary of State?

Or should we talk about Sondland suddenly remembering a few key details he forgot?


There are some large accounts right now demanding jail time, stirring people to rage and anger: Exactly contrary to what is required of people (demos) in a democracy.

Nobody should govern in anger.

Also there is a called prosecutorial discretion and independence. It isn't true that prosecutors have a moral obligation to punish all law violations.

They select what to prosecute.  https://criminal.findlaw.com/criminal-procedure/what-is-prosecutorial-discretion-.html …

. . . that democracy and rule of law fail if every single lawbreaker isn't punished.

Adding to this thread: Here's what it looks like to be the adult in the room.

Gaetz crashed Fiona Hill's deposition. Gaetz challenged Schiff, "Are you going to have someone remove me. . .?"

Schiff: No, you are going to remove yourself. 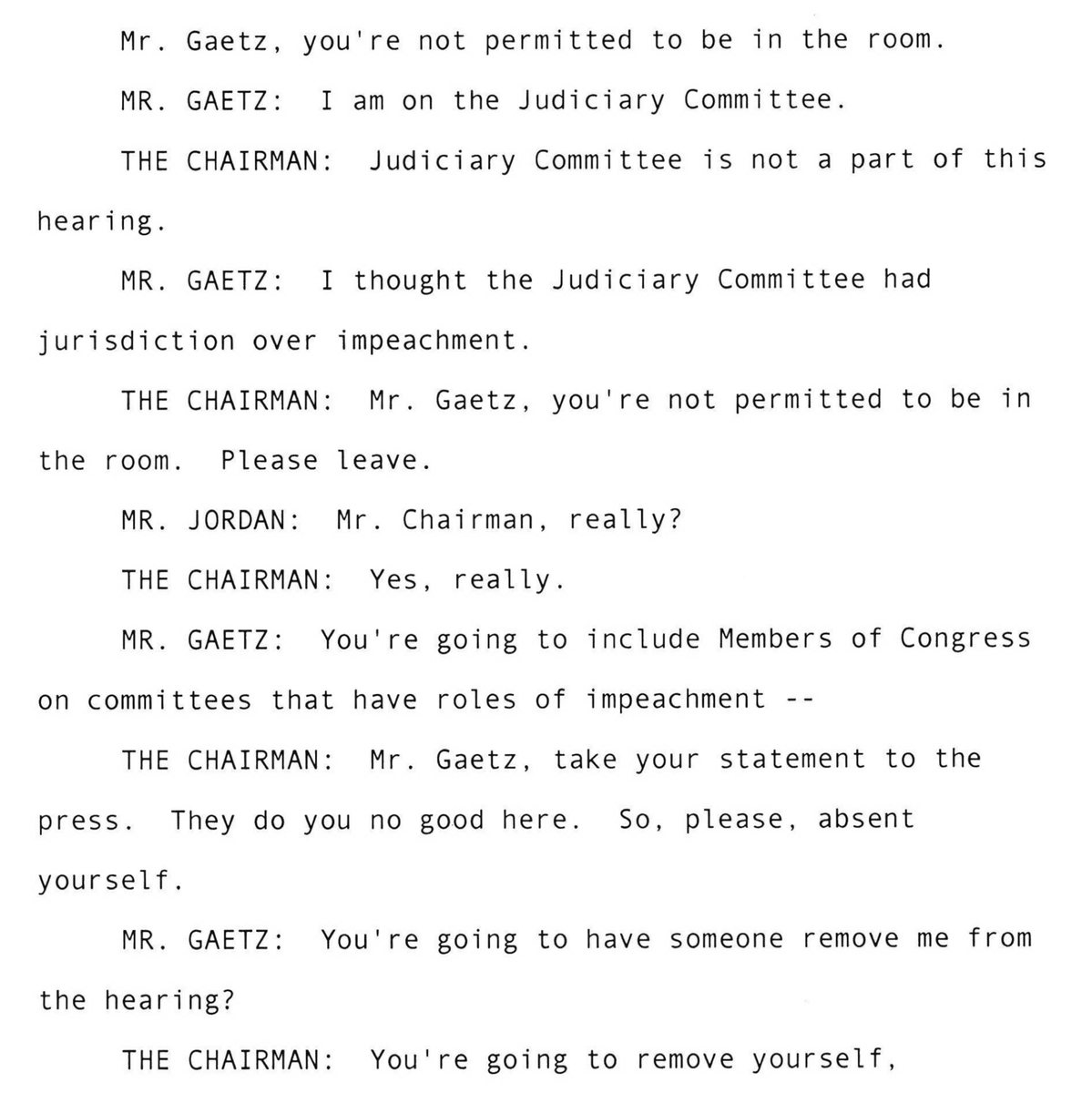 . . . Schiff calmly said that the time taken up would come out of the time for the Republicans to ask questions.

Schiff got his way.

Calling security and having him thrown out would have played right into Gaetz's hands.