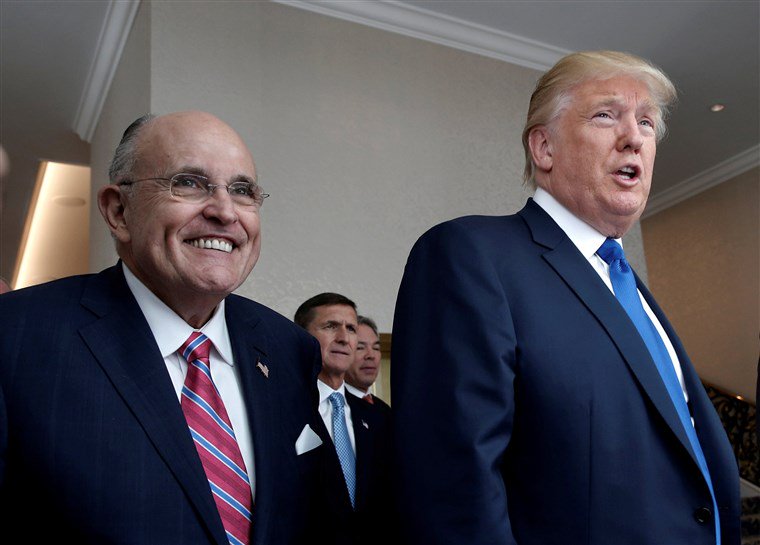 2/ But lawyers have been sitting on the sidelines *mystified* by Giuliani's description of what a lawyer does... as *none of what he's describing is legal work as we commonly understand it*. Rather, what Giuliani consistently describes as legal representation is *investigation*.

3/ Criminal defense lawyers—as I know from long experience—are *responsible* for the investigation of the cases they're working on, but that doesn't mean they *do* the investigation. They almost never do, unless the client is desperately poor and/or the lawyer has *no* resources.

4/ The reason lawyers outsource investigation to a contractor or in-house investigator is that the *advocate* on a case—the lawyer—can't *also* act as a witness, so you *never* want to act as both attorney *and* investigator because there's no way to get that evidence into court.

5/ Donald Trump is a "billionaire," and Rudy Giuliani is a very expensive "attorney." *Any* investigation that Giuliani was conducting on his client's behalf would have been conducted by a third party hired—and paid—by Trump, through Giuliani. Period. That's how it works. Period.

6/ But note that everything I'm discussing only comes up *within* the context of legal representation: a "case." No one in *America* has *any* idea what "case" Giuliani was working on when he started negotiating U.S. foreign policy illegally (Logan Act) in Ukraine. *No one* does.

7/ The Mueller Report didn't lead to charges against Trump. We've no public information about the FBI counterintelligence operation suggesting it has referred or is about to refer charges against Trump to the FBI's criminal division. The SDNY case has nothing to do with Ukraine.

8/ There are other pending cases involving Trump—like investigations of his inaugural fund—but none that propose Trump (at present) as a target, nor has his cooperation or testimony been sought in those cases. And Trump's cases regarding his taxes have nothing to do with Ukraine.

9/ An *attorney* isn't a *fixer*—*attorneys* work with clients when pending or likely *cases* involve the client. Giuliani has *no* open cases with Trump that in any way involve Ukraine—which is *why* he didn't hire an investigator and *why* he can't say the case he's working on.

10/ I submit that Giuliani *is* an attorney...but *nothing about his work for Trump in the Ukraine scandal constitutes legal representation* because *none* of the work involves a pending or likely case. (Unless Giuliani wants to reveal he believes Trump is about to be indicted.)

11/ Frankly, the fact Trump *can't* be indicted; isn't a target in any pending case involving Ukraine; maintains that he has done nothing wrong; and was not *charged* with anything after the Mueller Report suggests one of the following few scenarios must be in play here, instead:

(1) Giuliani is maintaining that he was *prospectively* working as Trump's impeachment lawyer before there was an impeachment process; in other words, what Giuliani was doing in Ukraine is somehow related to providing a *defense for Trump* before either the House or Senate.

(2) Giuliani is a "fixer" whose job is to "solve problems" for Trump that have nothing to do with the law but rather knee-capping Trump's "enemies"—thus, an attempt to encourage probes of Clinton/Biden. In this case, Giuliani isn't acting as an attorney or doing legal work.

(3) Giuliani didn't hire an investigator—which he would've done, by the way, even if he was "just" working as an "impeachment attorney"—because he wasn't doing legal *or* criminal/extra-judicial ("fixer") work. He was, instead, conducting diplomacy for America.... illegally.

16/ So if you're a lawyer and you're just trying to find out information, you use a contractor so the information can be presented in the pending case you're working on.

If you're trying to get people to *do things*, you want the principal's highest-ranking agent doing the work.

17/ So *every piece of evidence* here—as to the lack of a pending case; as to Giuliani's failure to use an investigator; as to his unwillingness to state what "case" Trump fears facing—suggests Giuliani was acting as a fixer or covert diplomat... *both of which would be illegal*.

19/ Giuliani's inability to answer these questions will underscore that as much as Giuliani may *be* a lawyer, Trump wasn't *using* him as one: he was using him to commit crimes, including bribery and violations of the Logan Act—in which case there's no attorney-client privilege.

20/ So every time @ChrisCuomo, @Maddow, @washingtonpost, @nytimes or anyone else refers to Giuliani as Trump's "lawyer," they're implying a fact not in evidence *hugely* important to the Ukraine scandal: whether Giuliani *was* Trump's lawyer in this case, and if so, on what case?

PS/ If Trump/Rudy want to say they think Trump is *still a target* in a federal case; and, at that, a case *involving Ukraine*; and a case in which Trump faces such *legal jeopardy* he needs legal representation—let them say so. *Then* Rudy can explain not hiring an investigator.

PS2/ But if they *can't* identify any such case or such legal jeopardy, then *Jesus stop calling Rudy Trump's "lawyer" because the work he did was either illegal diplomatic work in violation of the Logan Act or illegal fixer work that runs afoul of federal bribery statutes*. /end