I finished reading Taylor’s testimony. To say the least, it wasn't good for Trump.

Here are my notes.

Per suggestion, my impeachment Cliff Notes are now called Over the Cliff Notes.

1/ June, 2019: Taylor arrived in Kiev to find “two channels of U.S policy making and implementation, one regular [the embassy staff] and one highly irregular [the Three Amigos—Kent, Sondland, and Volker— and Giuliani.]”

2/ Taylor saw nothing wrong with working with Giuliani—as long as Giuliani was working to advance the stated aims of US policy.

3/ Taylor testified that the Ukrainians understood that conducting these investigations would involve them in the U.S. 2020 election.

July 20: Danyliuk (a Ukrainian official) told Taylor that Zelenskyy didn’t want to be used as a pawn in a U.S. reelection campaign.

Yermak, a Ukrainian official, FIRST wanted the date for the White House meeting, THEN they'd make the announcement.

5/ The "irregular channel," though, insisted that the Ukrainians make the announcement first, THEN they would get the meeting date.

Narrator: The Ukrainians were obviously afraid of getting stiffed.

6/ Aug. 16: Taylor learned that Yermak (advisor to Zelenskyy) asked the US to submit an official request for the investigation Giuliani wanted.

Narrator: Clever? Then everyone would know the Ukrainians were doing the investigation at Trump’s request. . .

He wanted it to look like the Ukrainians targeted Biden's “corruption” on their own.

Sept. 8: Sondland told Taylor Ukrainians had agreed to do a CNN interview and announce the investigation. 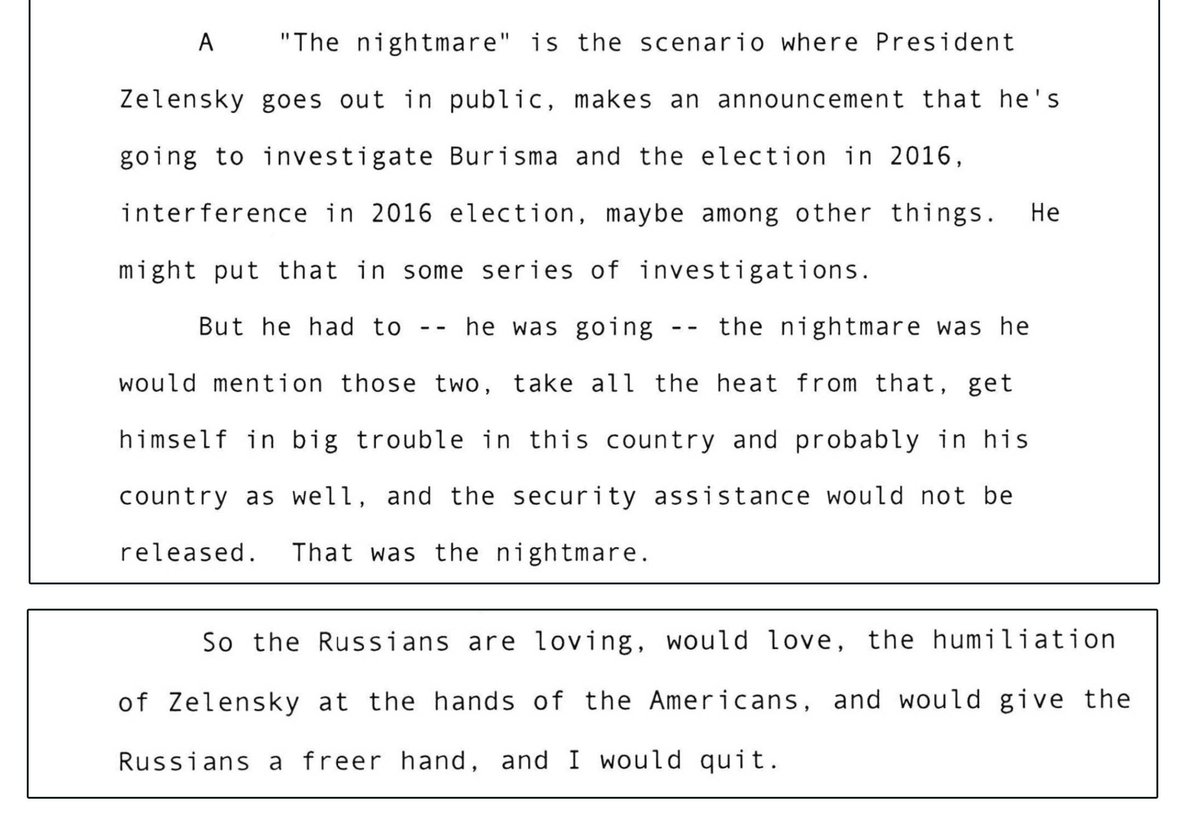 9/ Sept 12: Taylor wanted to make sure Zelenskyy wouldn't give such an interview to CNN.

Sondland (& later Volker) told Taylor that Trump was a businessman, and before a businessman signs a check, he asks that the person pay up.

Taylor said that makes no sense. . .

10/ . . .Ukrainians didn’t owe Trump anything and moreover, holding up security assistance for domestic gain was “crazy.”

This time the Republican questioning wasn't so bad, and in fact, they tried out a few real defenses.

Taylor made mincemeat out of each of them.

11/ The GOP tried to establish that Trump had legitimate grounds for trying to stamp out corruption in Ukraine.

Taylor said you don’t stamp out corruption by insisting that certain cases be investigated.

You do it by strengthening institutions (impartial judges, rule of law).

12/ (Ambassador Yovanovich testified that a lot of the corruption in Ukraine takes the form of corrupt prosecutions.)

Narrator: You don’t stamp out corruption by launching an investigation that everyone knows is politically motivated, I.e., a corrupt prosecution.

13/ GOP questioners showed Taylor a Politico article from 2016 about how a few Ukrainians wanted Clinton to win, so there! Trump had good reason to believe that Ukrainians were out to get him!

First, Taylor had never seen the article or heard anything like that. . .

14/ Moreover, Taylor pointed out that the most the article established— if true—was that it applied to a few Ukrainians, and you don’t paint all Ukrainians with a broad brush from such an article.

Now—here’s the fun part —to establish the credibility of the article. . . 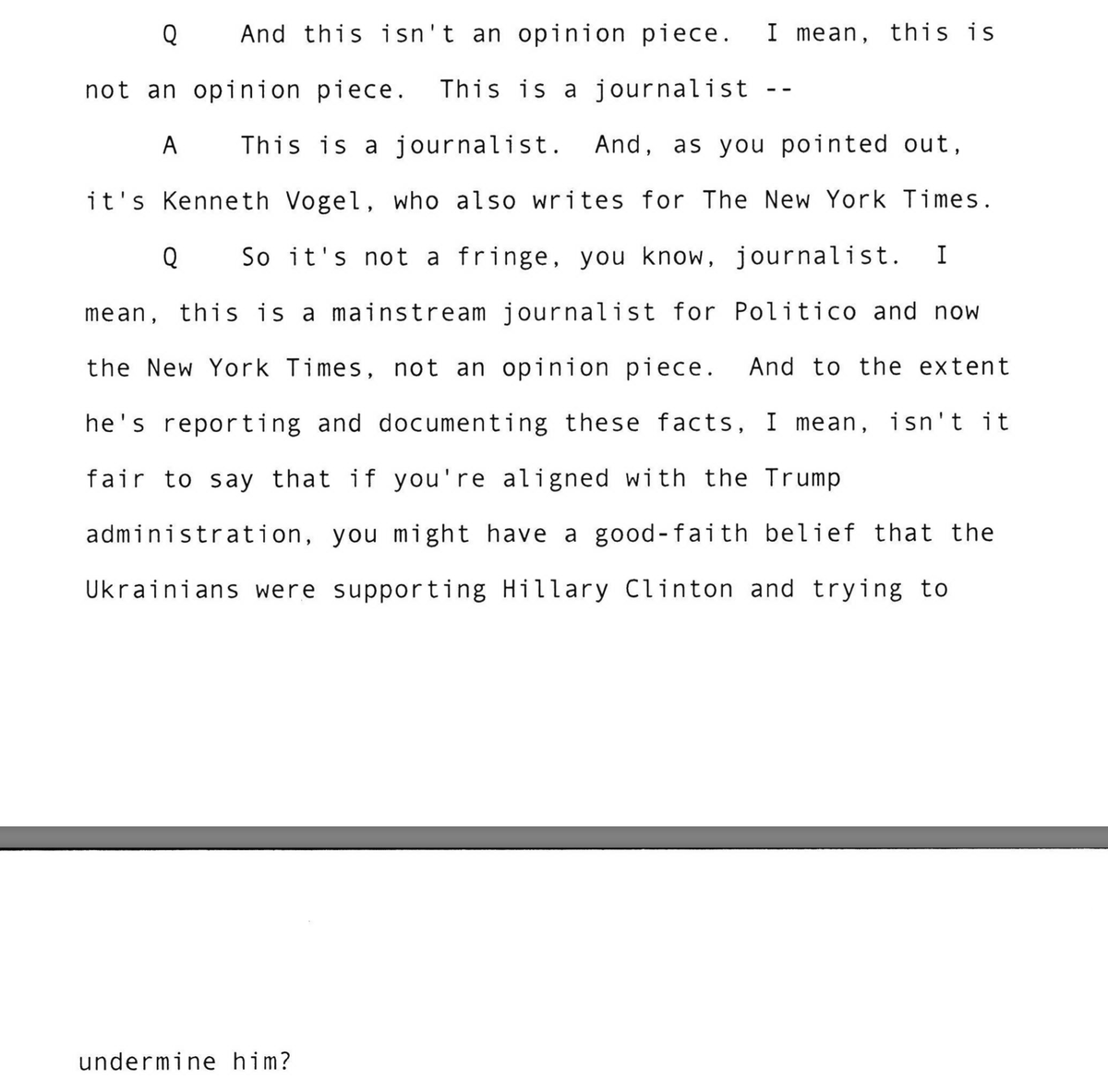 16/ Now, for the most absurd part: The quid pro quo discussion. 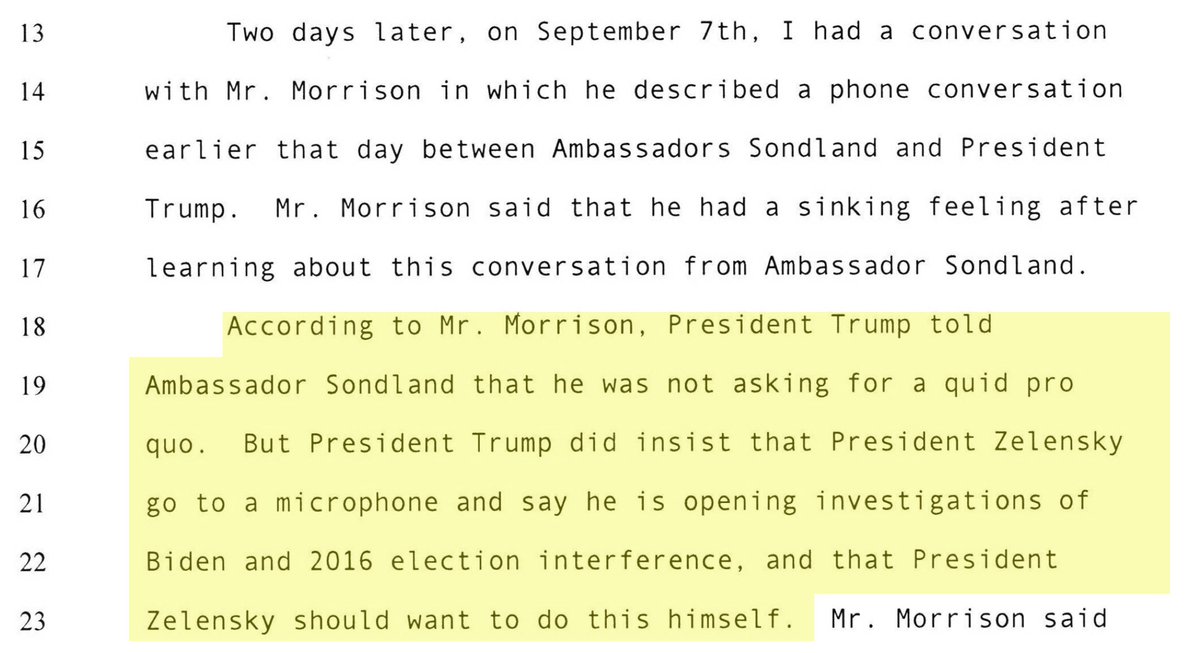 17/ If what wasn’t nonsensical enough, how about NO QUID PRO QUO except that we INSIST ON ATTACHING A CONDITION which MUST be met, but it’s NOT a quid pro quo 👇 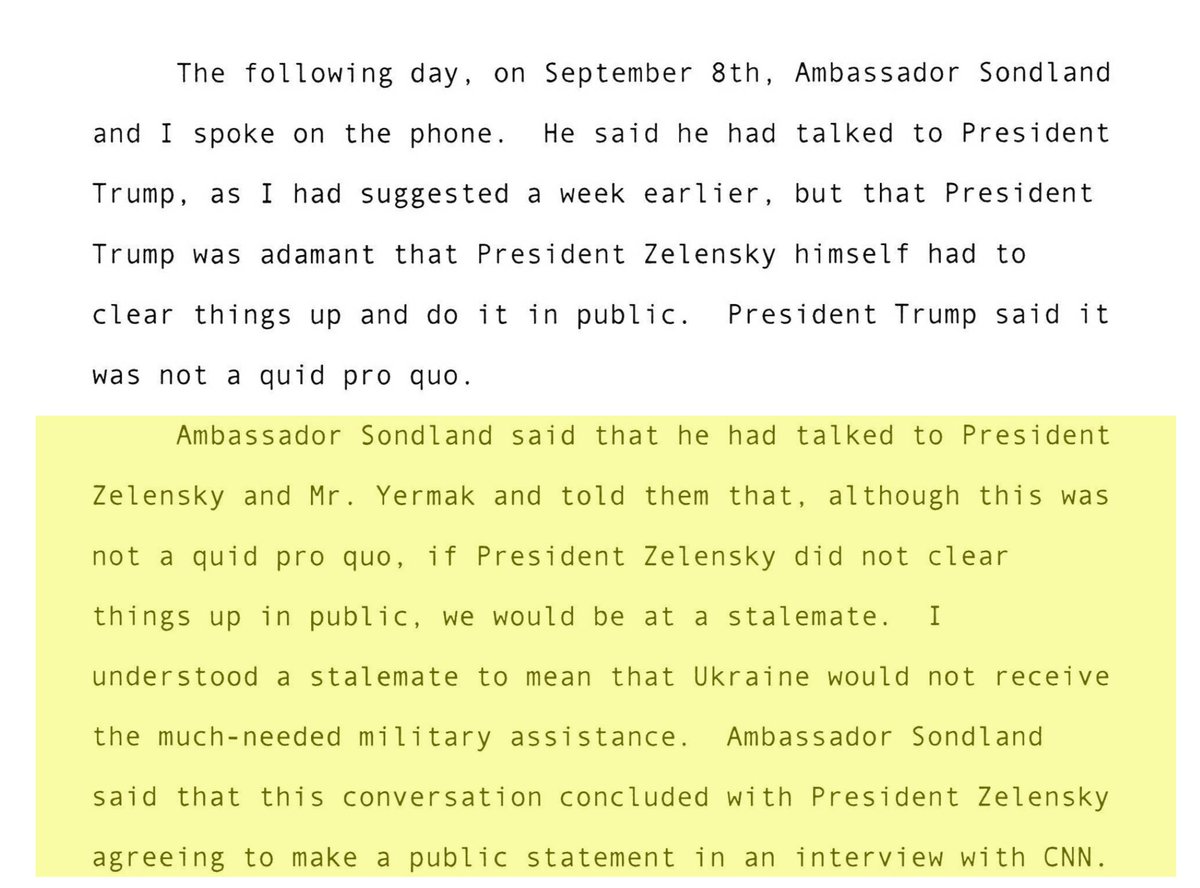 18/ The only possible conclusion is that poor Sondland didn't have a clue what "quid pro quo" means.

But I gather he felt quite important: He not only purchased an ambassadorship, he got to repeat fancy Latin phrases.

Over the Cliff Notes is a fitting name.

If you want to see how Taylor's testimony fits into the entire narrative, here are my notes:  https://impeachment-trump.com

Interesting biographical fact: I decided to go to law school as a second career (I was teaching college English) during the Clinton impeachment . . .

. . because I was fascinated. I kept wishing I understood it all in more depth. Now here I am, writing Twitter threads about another impeachment.

I was completely riveted by this testimony. Yes, bonkers ⤵️