"Throw all the co-conspirators under the bus" ⤵️ is the most desperate of defenses.

Trump was in charge. He appointed them.

When Trump starts pointing the finger at his underlings, they’ll point back. Most people don’t go quietly under buses.  https://www.washingtonpost.com/powerpost/house-gop-looks-to-protect-trump-by-raising-doubts-about-motives-of-his-deputies/2019/11/07/aaa14efa-0173-11ea-8bab-0fc209e065a8_story.html …

Taylor’s information about what Trump wanted came from Sondland and others.

So throw Sondland, Rudy, and Mick under the bus?

ICYMI, I tweeted notes on Taylor’s testimony.
See next Tweet. 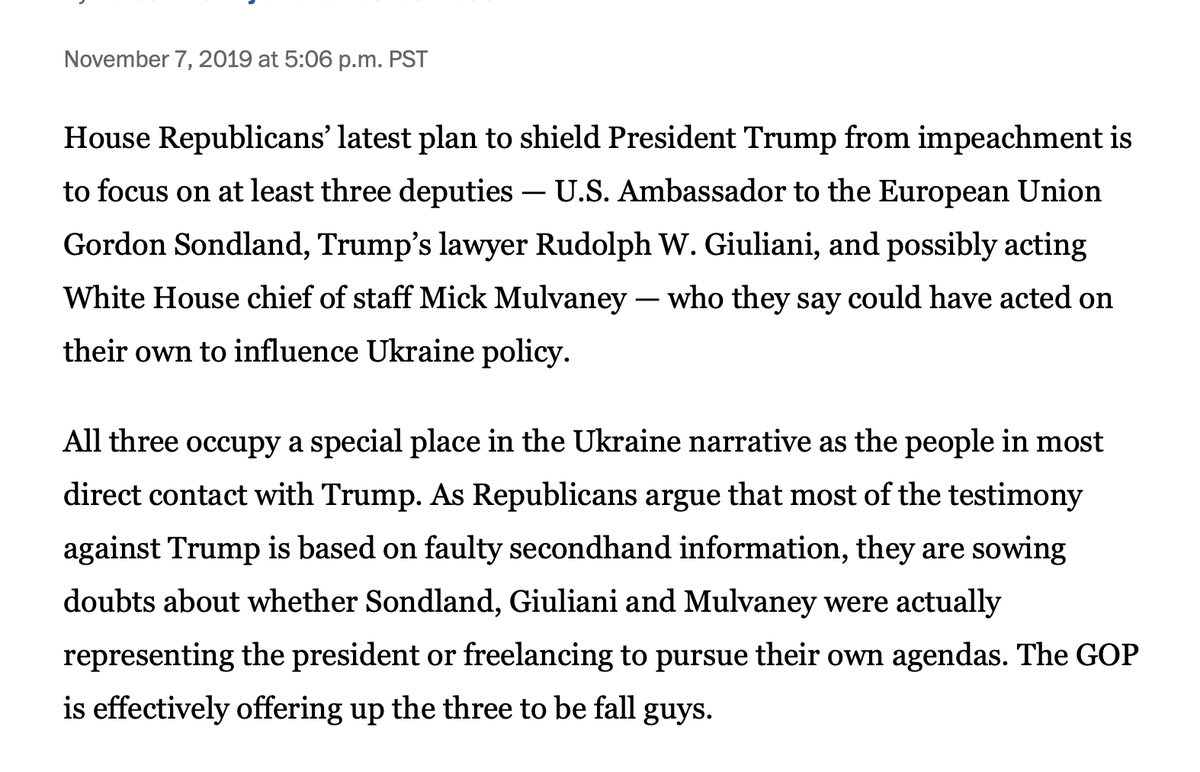 3/ Here are my Notes from Taylor's deposition:

Throwing Mick and Rudy under the bus will create so much chaos and havoc among GOP ranks, I just can't see it happening.

I suspect they'll fall back on the "there was nothing wrong with it" defense.

4/ Here is the other way Trump is caught between a rock and a hard place.

They calculated that withholding evidence and preventing testimony and facing an obstruction charge was less damaging than allowing people to have access to the evidence . . .

5/ This means the Senate will vote on this issue:

💠Can the President excuse any witnesses from testifying and withhold any evidence he pleases?

If they acquit the American people will see they are willing to create an autocrat.

6/ The defense goes like this: Trump relied on Rudy to do the right thing. That evil and greedy Rudy, though, took advantage of Trump's trust to do bad things.

Never mind that the bad things Rudy did were to benefit Trump.

7/ Let me be clear. When I say "it won't work" I don't mean that Trump will be removed by the Senate. That's still a long shot.

What I mean is that the GOP will implode and hobble toward the 2020 elections a mess, and there will be a Democratic sweep. . .

8/. . . in November, and we can begin to heal, repair the damage (which will take a while), rebuild and restrengthen our institutions and learn from what happened so that the next time a Trump arises, we will be better prepared.