1/ A court blocked North Carolina's 10-3 GOP-majority congressional germander, & GOP legislators are redrawing the map & could pass one next week. The GOP suspiciously hasn't shared any of their draft maps online, but Dems have, so I'll post those maps in this thread #NCGA #NCpol

2/ This North Carolina draft congressional map was drawn by Democratic state Sen. Ben Clark on Wednesday. Here are the partisan and demographic summary stats for it #NCGA #NCpol 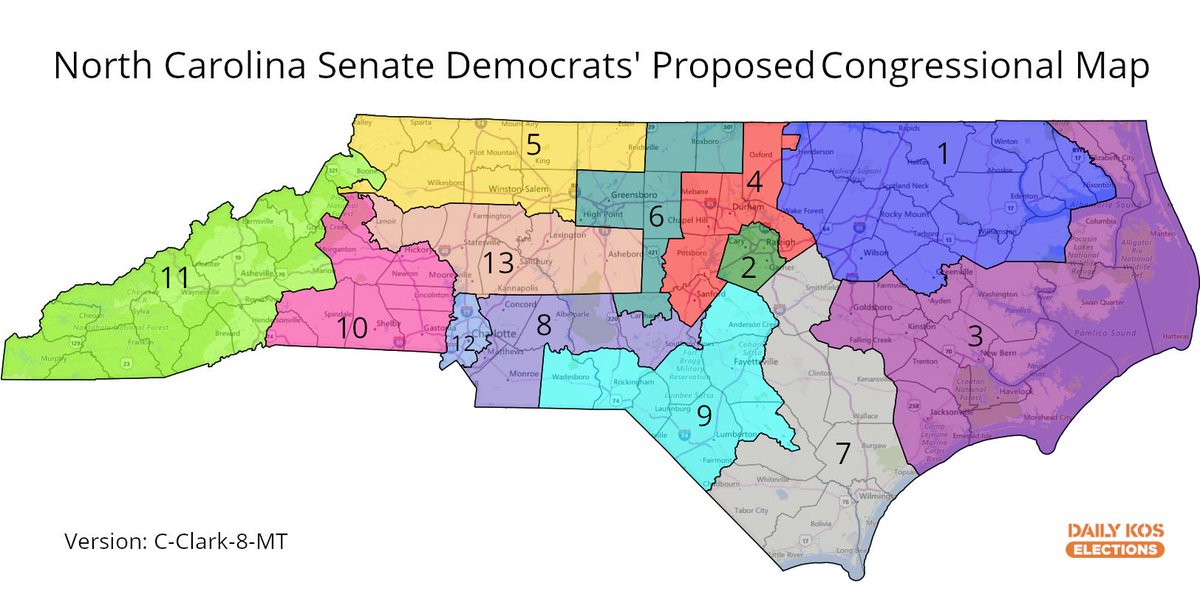 3/ This North Carolina draft congressional map was drawn by Democratic state Rep. Jean Farmer-Butterfield on Friday. Here are the partisan and demographic summary stats for it #NCGA #NCpol 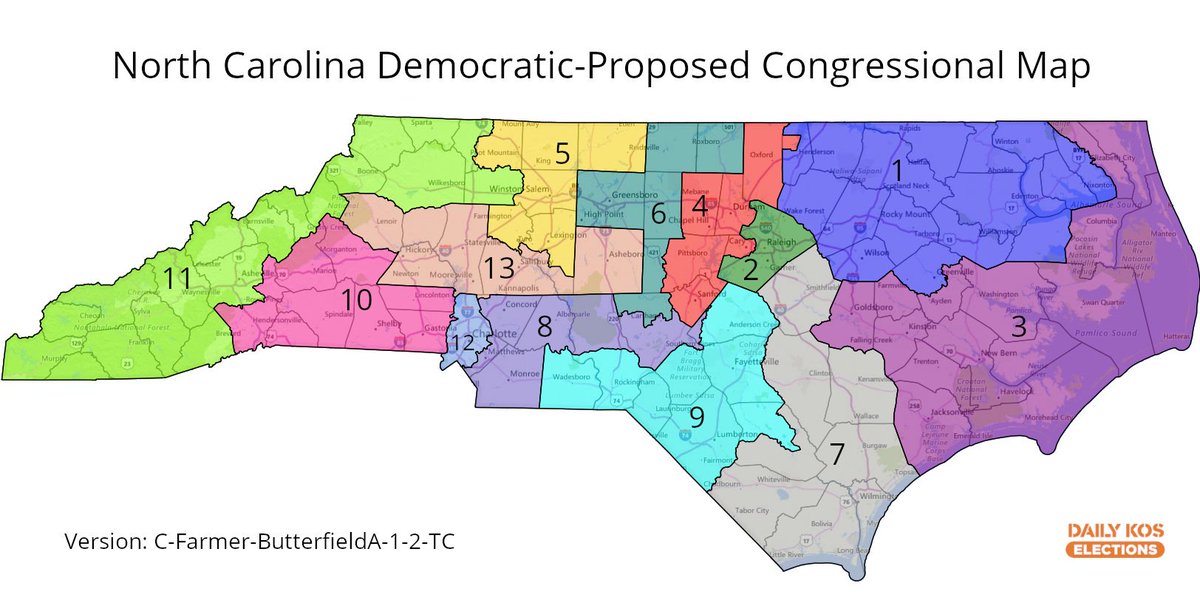 4/ This North Carolina draft congressional map was drawn by Democratic state Rep. Pricey Harrison on Friday. Here are the partisan and demographic summary stats for it #NCGA #NCpol 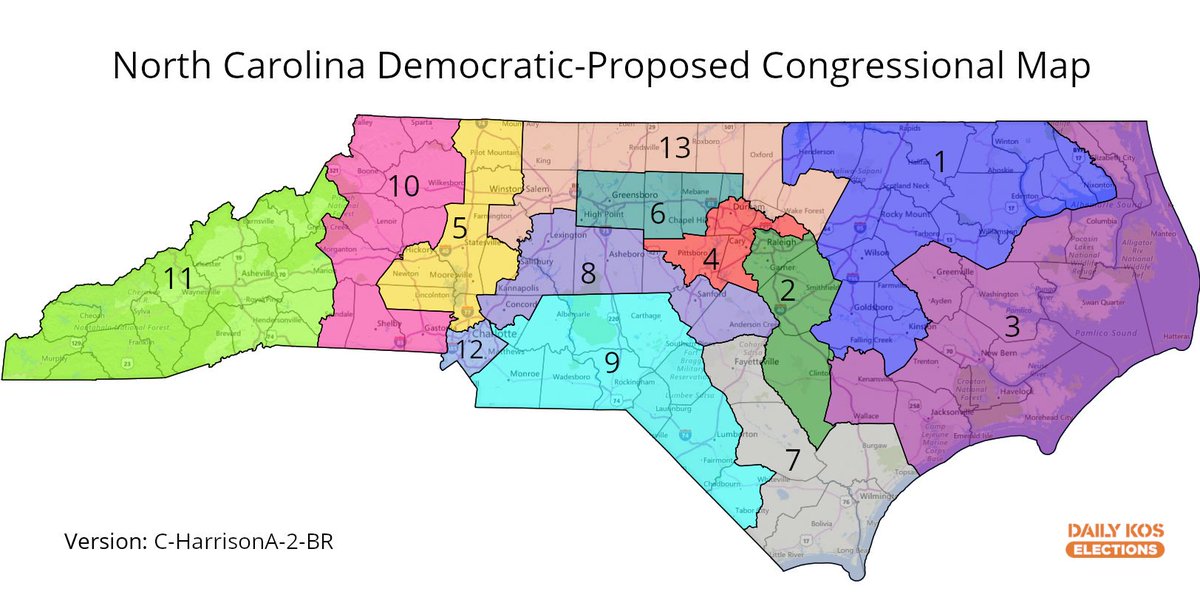 5/ This North Carolina draft congressional map was drawn by Democratic state Rep. Shelly Willingham on Thursday. Here are the partisan and demographic summary stats for it #NCGA #NCpol 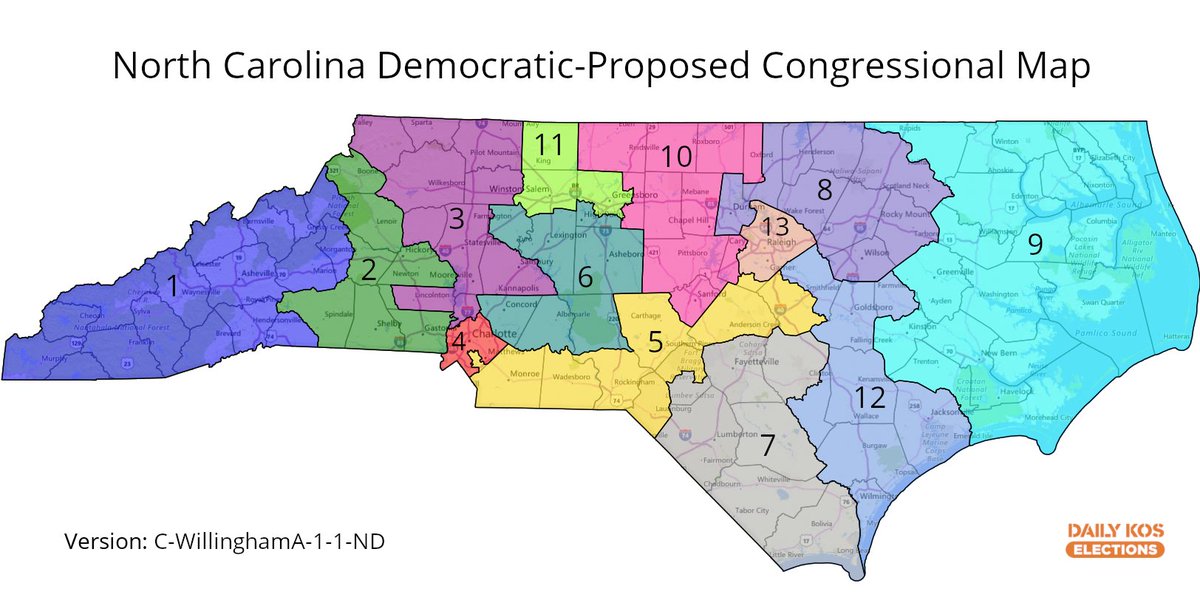 6/ I was able to analyze one North Carolina draft congressional map that Republican state Sen. Ralph Hise drew on Wednesday. Here are the partisan and demographic summary stats for it plus the 2018 results, but the GOP still hasn't uploaded the official files for it #NCGA #NCpol 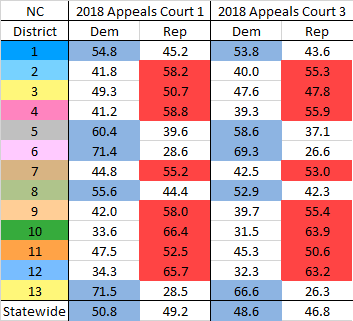 7/ Here's my own proposal to redraw North Carolina's congressional map in a nonpartisan manner. This map is more compact than every other map in this thread, splits just 4 cities & the minimum possible # of 12 VTDs/county parts, & it preserves communities of interest #NCGA #NCpol 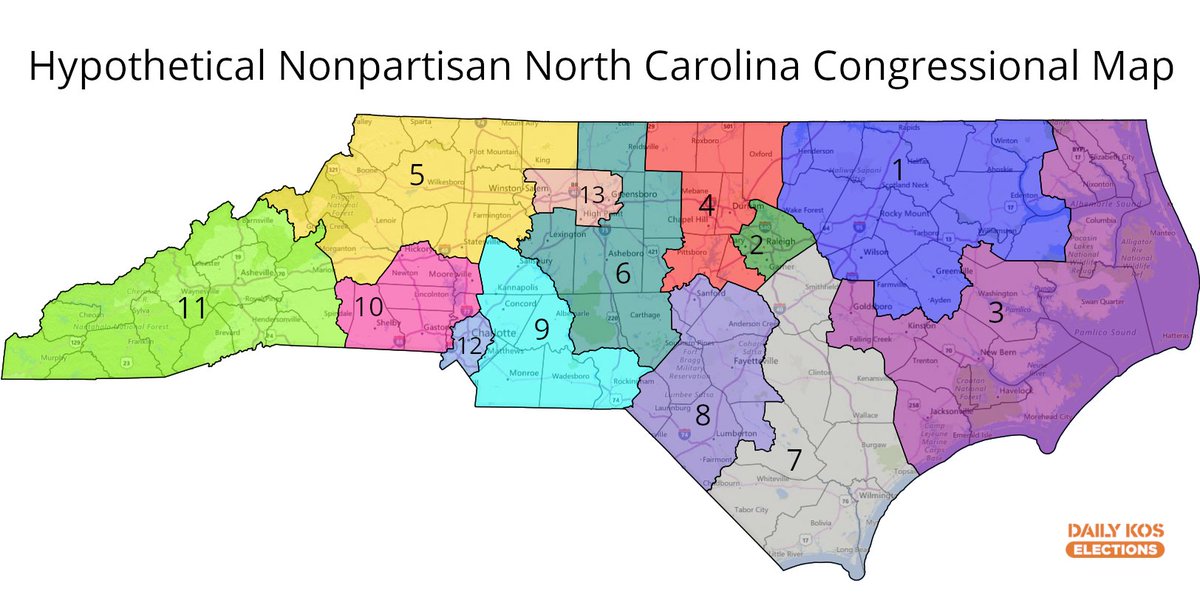 8/ Some additional context on the map in the 4th tweet in this thread, which wasn’t mainly a Dem proposal. I’ll keep adding maps to this thread as they get published. Legislators return to the drawing room on Tuesday

9/ A draft congressional map from NC Dems uses SCOTUS' 2012 Tennant v. Jefferson County ruling to split only 7 counties. I like this map & it should be legal under federal law, but I wouldn't draw it solely to avoid giving federal courts any new reason to intervene #NCGA #NCpol

10/ NC Republicans continue to try to draw an 8-5 GOP majority congressional gerrymander by cracking the Dem-leaning Sandhills region among three GOP-leaning districts. I'll have partisan & demographic analysis for these maps as soon as they upload the files online #NCGA #NCpol

11/ Republicans have *finally* filed their first NC congressional maps (the Hise & Newton ones), & several Dems have filed proposals too, but none of these yet have shapefiles or block assignment files I'd need to do quick computations #NCGA #NCpol  https://www.ncleg.gov/Committees/CommitteeInfo/NonStanding/6740#11-12-19 …

12/ North Carolina Republicans plan to vote soon on a new congressional map that hasn't even been selected yet, & we've barely had any time for public input thanks to their legislative blitzkrieg #NCpol #NCGA

13/ North Carolina Republicans are allowing very little opportunity for public input, but if you can make it to Raleigh tomorrow, you can testify against their proposed congressional gerrymanders & in favor of #FairMaps. #NCpol #NCGA

14/ NEW: I now have the files needed to analyze the North Carolina congressional maps legislators have filed online. First up, I'll look at the partisan and demographic stats for the six Republican-drawn maps, then the Dems when I get a chance #NCpol #NCGA  https://www.ncleg.gov/Committees/CommitteeInfo/NonStanding/6740#11-12-19 …

15/ This Republican proposal for an North Carolina congressional map was drawn by state Rep. Paul Newton. It appears to give Republicans an 8-5 majority with few other seats winnable for Dems. Note how it cracks the Sandhills among 3 districts #NCGA #NCpol 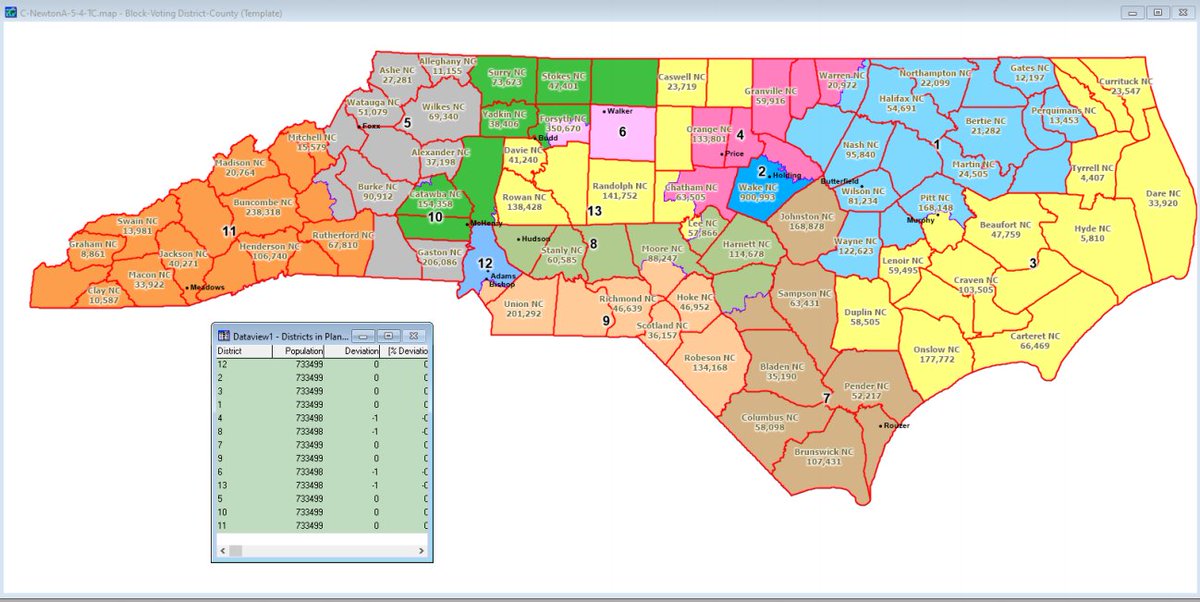 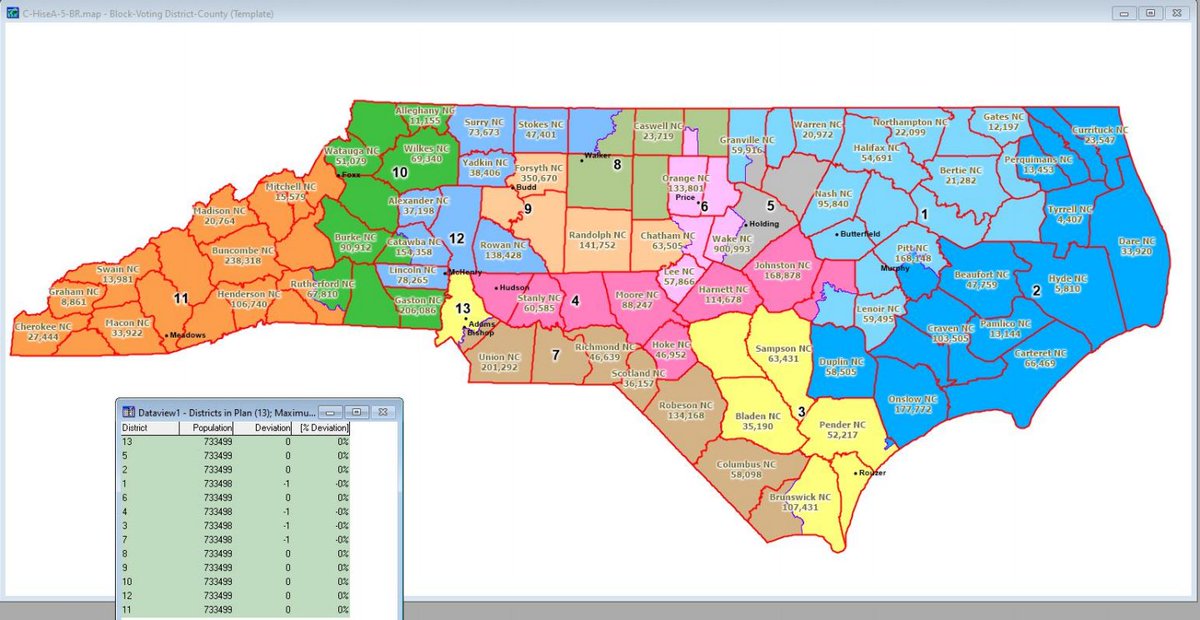 17/ This third proposal by GOP state Sen. Ralph Hise appears to have used the bipartisan judges' proposal as its baseline for parts of the map. This one isn't as bad as the others, but Districts 6, 7, & 10 awkwardly combine very different communities of interest #NCGA #NCpol 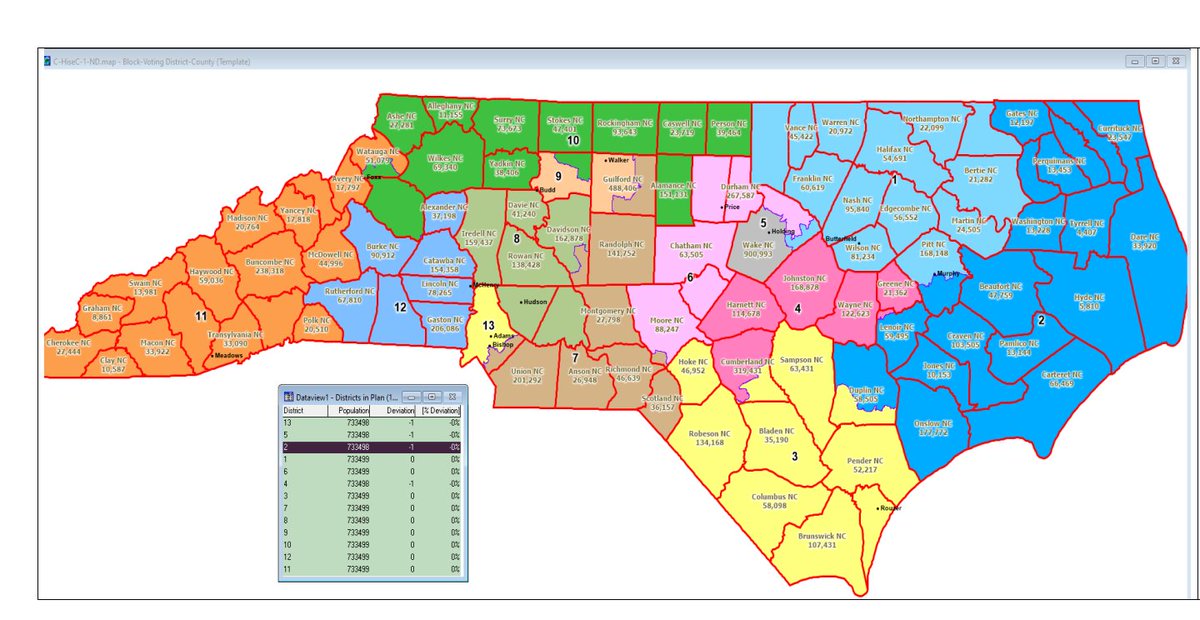 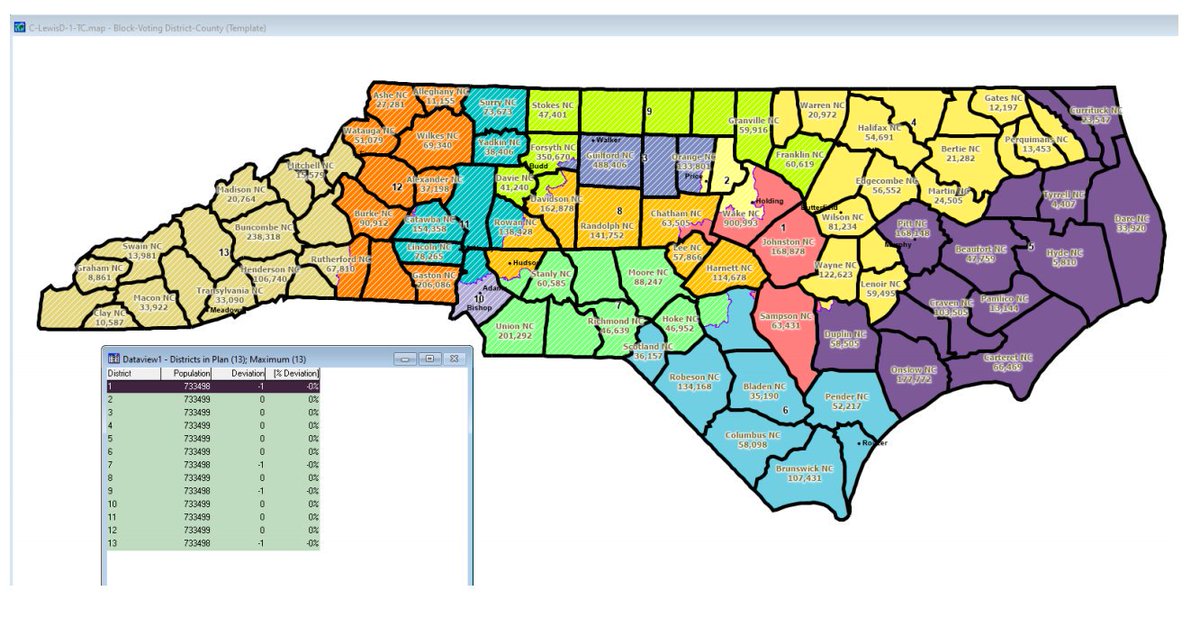 19/ This congressional gerrymander by GOP state Rep. David Lewis is almost as extreme as the map that got blocked in court (Lewis was the one who admitted the old map was gerrymandered). It would likely elect a 9-4 GOP majority, little different than the old 10-3 map #NCGA #NCpol 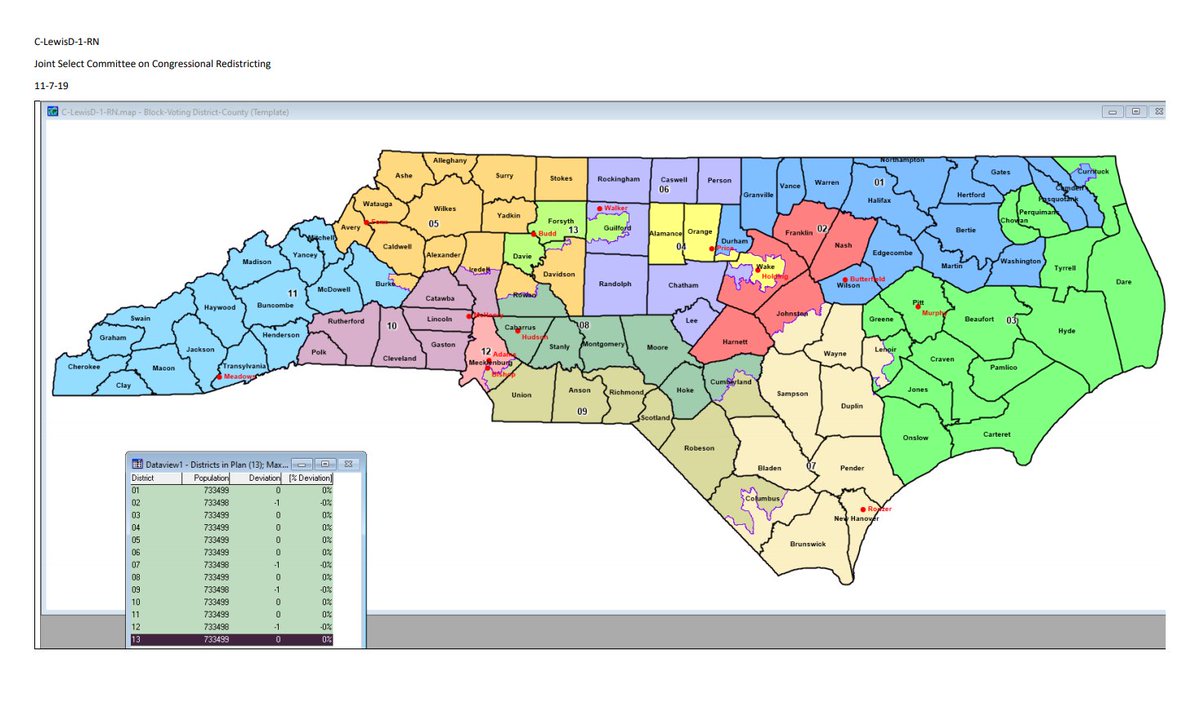 20/ You can find all of my data calculations for these maps in this folder. I calculated all 2008-2018 statewide elections (plus some 2004), 2016 primary turnout, adult citizen racial demographics, & adult educational attainment rates for every district  https://drive.google.com/open?id=1UG52usANBJ-t59hn5-tWCwEtG9hrk5yX …

21/ I'll have the calculations done for Democratic congressional map proposals later this evening, but at first glance they appear fairer than what Republicans proposed (no surprise there)