In a naked attempt at journalist intimidation, a pro-Erdogan outlet reputed to be a mouthpiece of Turkey’s ruling party published an editorial yesterday essentially branding me a terrorist.

The unsigned op-ed in @DailySabah calls me an “American reporter who is known for his coverage of the Halkbank trials in New York and carrying out the activities of FETÖ within the scope of uncovering Turkey’s lobbying activities in the U.S.” 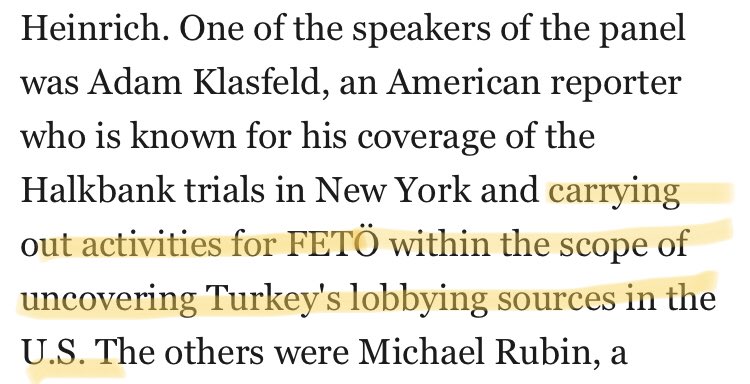 The purported terroristic activity Sabah accuses me of is tabulating the Turkish government’s ballooning lobbying expenditures in the United States (especially to Trump-linked firms), as revealed in my country’s public records.

This absurd accusation by Turkey’s state-aligned media puts me in the illustrious company of ex-U.S. Attorney @PreetBharara, a sitting federal judge, the best and brightest Turkish journalists, and leading scholars.

It is something of an honor, if a complicated one.

Truth be told: I did not know whether to ignore the ravings of a faraway propaganda outlet, but I decided to step forward because too many Turkish journalists are languishing in prison for such preposterous claims.

During their White House powwow, Trump should demand that Erdogan end his war against the press internationally.

Instead, both leaders will likely remain united against the media and the so-called “deep state.” (A Turkish concept)  https://www.courthousenews.com/in-impeachments-shadow-trump-and-erdogan-share-deep-state-fixation …

This is the investigation into the Erdogan government’s U.S. lobbying expenditures his state-aligned press depicts as an act of terrorism.