Four weeks ago, the @nytimes proved that the Russian Air Force bombed 4 Syrian hospitals in 12 hours. Last week, we got word that they struck one of the hospitals again. It seemed too outrageous to be true, but we proved it:  https://www.nytimes.com/video/world/middleeast/100000006815692/syria-hospitals-russia.html …

In this thread, I’d like to give some insight into the steps our Visual Investigations unit took to verify the claim that Russia bombed Kafr Nabl Surgical Hospital — a major underground trauma center which coordinates were shared with Russia by the U.N.

The investigation started on Nov. 6, when we saw social media reports claiming that the hospital had been struck multiple times again. One of the earliest mentions we found was on Telegram, at 16:26 local time.  https://t.me/RASD_KFRNBOL/106656 …

We decided to use the same methodology as we used in our previous investigation ( https://www.youtube.com/watch?v=rCi-2-Flcxk …) to verify these new claims: audio recordings of the Russian pilots in Syria, plane spotter logs, witness accounts, as well as photos and videos of the incident itself.

Read more about we conducted the previous investigation, including how we determined that Kafr Nabl Surgical Hospital had been bombed in May, in this Times Insider.  https://www.nytimes.com/2019/10/13/reader-center/russia-syria-hospitals-investigation.html …

The first step was figuring out the time of the attacks. Using CCTV and metadata of videos filmed nearby, we were able to distinguish 3 separate strikes at 16:22, 16:28 and 16:34. This matched up with eyewitness reports. Here's the second strike from 4 different perspectives.

The 3 strikes shook the hospital, damaging the main entrance and filling the hallways with dust. Around 30 staff members were trapped inside, in addition to patients. Luckily, there were no casualties.

The intervals between each weapon release matched up almost to the second with the CCTV footage and the metadata from the videos we obtained through social media: 5m52s/5m54s between the 1st and 2nd strike, and 5m59s between the 2nd and 3rd.

(Verification detail: the intervals matched, but we suspected that the CCTV timestamps were exactly 3 minutes off. We confirmed that this was indeed the case by asking staff to hold a mobile phone with the correct times right next to the CCTV livefeed.)

As a third step, we checked the flight observations from spotters on the ground. They only witnessed fixed-wing aircraft from Russian Air Force overhead between 16:00 and 17:00 local time — the timeframe of the strikes. 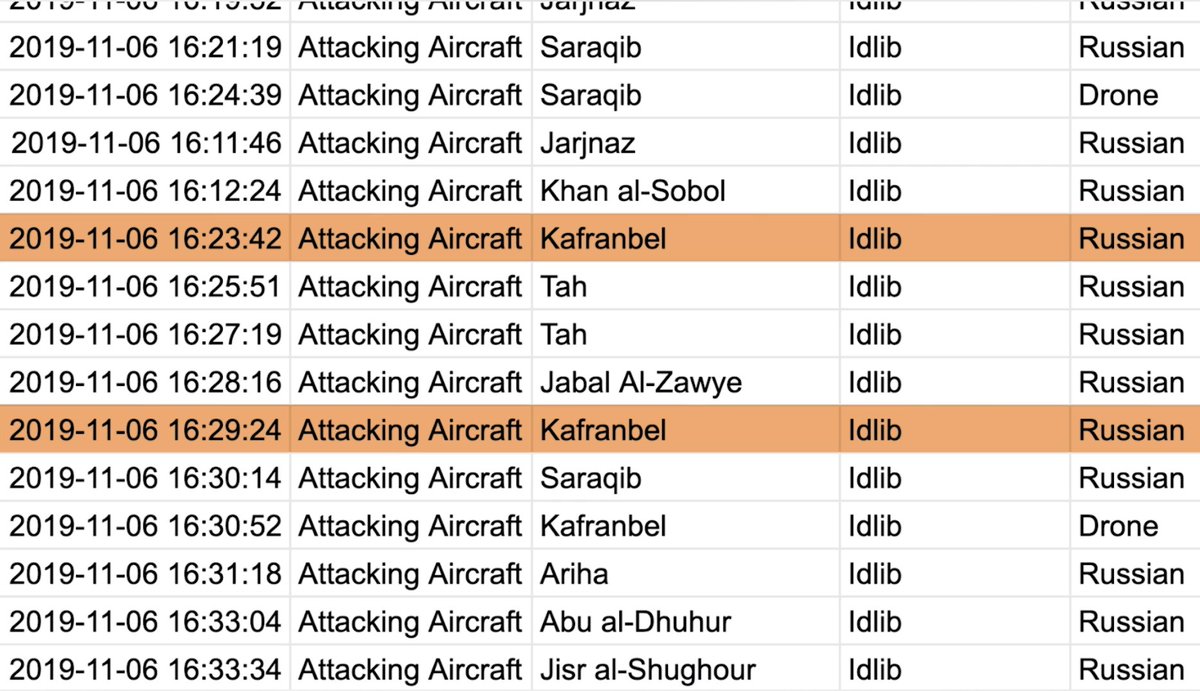 Russia *had* to know that this was a hospital. Remember, we already proved that Russia had attacked it in May. Their Defence Ministry acknowledged and responded to that story. And the article was shown to them at a U.N. Security Council meeting.

On top of all of this, @whitney_hurst discovered that a previous attack on Kafr Nabl Surgical Hospital in July is being investigated by the U.N.’s Board of Inquiry. Read her reporting w/@rickgladston here.  https://www.nytimes.com/2019/11/14/world/middleeast/russia-syria-hospital-bombing.html …

Besides an attack on Kafr Nabl Surgical Hospital, the U.N. is investigating six other attacks on humanitarian sites in Syria. Diplomats told @whitney_hurst that Russia is applying pressure to keep the findings a secret.

Kafr Nabl Surgical Hospital has been bombed repeatedly. But medical staff refuses to leave. “We will never pay them what they deserve for sticking by the side of their community,” said Fadi Aldairi from @hihfaduk, the U.K.-based NGO supporting the major underground trauma center.

And, this must be said, investigating potential war crimes in such meticulous detail would not have been possible if it wasn't for the hundreds of Syrians risking their lives while filming and photographing what's going on and uploading it to social media.

If you prefer watching the investigation on YouTube, here you go:  https://www.youtube.com/watch?v=Y75i8jNp4TY …