There is something about mobile creation & incentives that has caused a drove of this military TikTok content; it dates back to Musically, even. Could be the partial anonymity. Maybe a policy arbitrage? The Facebooks are structured to prevent leaks w/ predefined graph canaries.

These are normalized now, and that has created a feedback loop to create more. Even as U.S. Senators are calling for TikTok to be investigated, U.S. troops (and militaries across the world) are capturing videos through TikTok. ISIL was even making Musically content from Syria.

It appears that more military content on TikTok has been created in the last 2 years than is visible across all of social media from this decade. It's an explosion of creation that is hard to understand. Maybe it is lackadaisical implementation and policy fatigue? Generational?

The DoD has yet to issue any guidance for TikTok, or what it represents more broadly. The cynic in me thinks that is purposeful; these videos are propaganda reaching the youngest Americans, and that is valuable for future recruiting. But at what cost? https://www.militarytimes.com/news/your-military/2019/11/04/concerns-rise-over-possibility-chinese-could-use-tiktok-to-collect-troops-data/ … 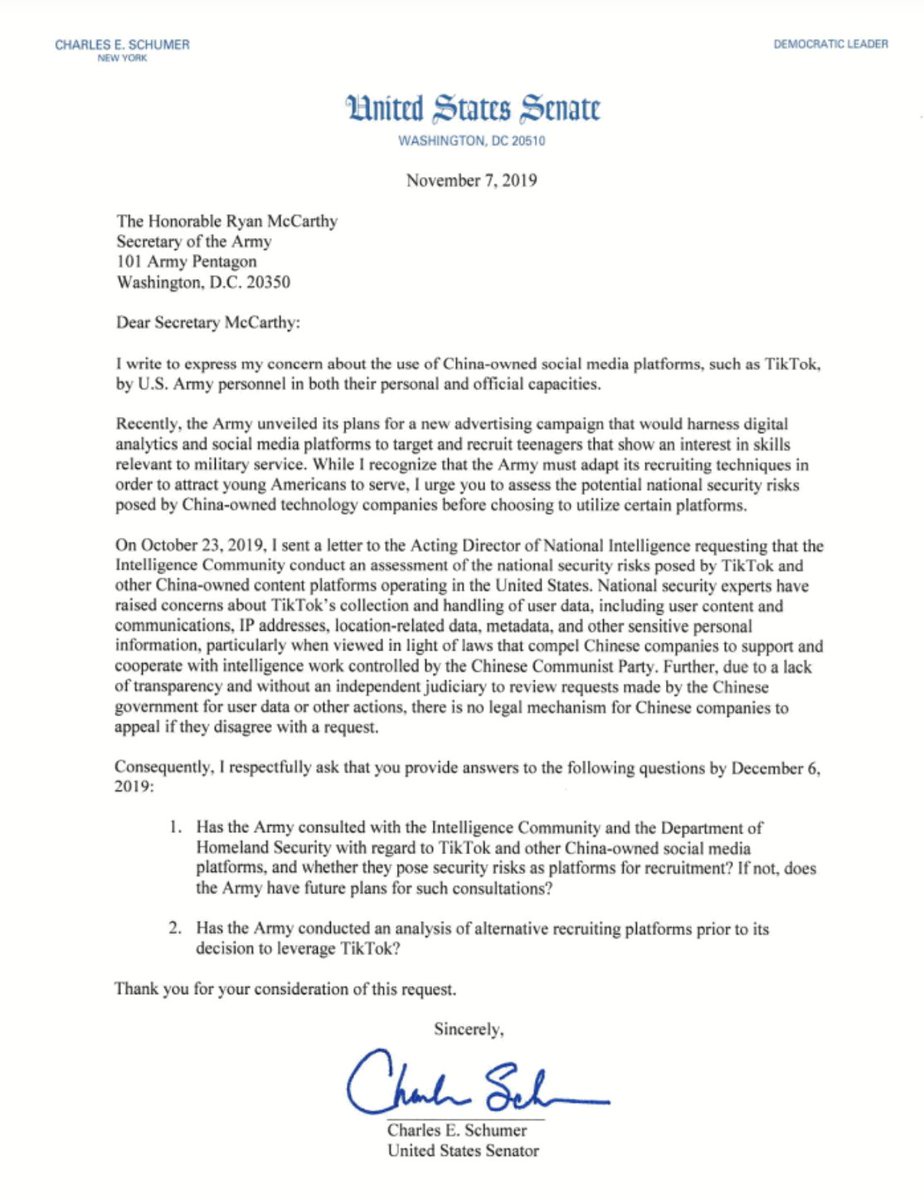 The threat of a foreign-owned entity aside, the incentive structure and ease of creation makes TikTok a unique problem. Secrets are finite. When you increase the volume of UGC, you increase the likelihood that secrets are buried in it — and AI increasingly means you can find them

When we think about the Strava leak, the value of anonymized Fitbit data only became apparent when it was aggregated & heat-mapped. The patterns are sometimes the secret. These patterns provided a lot more validity to the whispers of an African shadow war.

Even if TikTok had zero ties to Beijing, its intent — to promote creation — is problematic, in more ways than 1. In the past, those U.S. military videos that wound up on YouTube & Liveleak were often captured from a 'dumb' camera. The air gapped data traveled home on an SD card.

Often the case with TikTok, because it owns the mobile camera, is that it controls capture & upload from end-to-end. That means, by unintentional design of these mobile frameworks, more data about the process is captured than the product. These videos are not flat, dumb videos.

While YouTube, Facebook, or LiveLeak would strip uploads of much of their metadata — which often only represented devices & timestamps — platforms that own the camera are bringing with them more. What the API returns may be 'flat,' but it's untold what else it may capture & store

Say you wanted to build a TikTok. Building for mobile now means building for the foldables, paired TVs, & the non-obvious future wearables. Your value is your backlog. You'd want to capture as much RAW camera output. You'd want mobile previews, but you'd want a serverful master.

For when those new paradigms hit, you'd want your backlog to be future-proofed. That means uploading the editing metadata — and each of its dependencies — to your databases. Your pipeline may render those videos for low-connectivity markets or small screens differently.

When the iPhone X hit, the screen ratio was so different from the rest of the market that what it captured, or what anyone else captured, was not fill compatible. Pan & scan tradeoffs were necessary for apps like Snapchat. The hurdle was temporary because Snapchat was ephemeral.

At least, that was the case for your snaps and stories. From its inception, Snap faced these problems for Shows. How do you create video that feels as rich and fluid as software, but fits into a newsroom's process? Snap had to build the tools & the suite. Safe boxes were crucial.

For Snap Shows, the value of the broadcast, of the public and longterm reachability, was in the backlog. That informed how shows were shot, w/ safe boxed foresight. It meant dynamic, screen-scaled graphics packages. It meant a layering & render pipeline to encode for optionality.

What Snap was building was more complex than YouTube. Encoding for low-bandwidth, or small screens, was not an afterthought — it was core to each stage of the creation process. Snap challenged how web and cable video was created, and that set them deeply apart; mobile TV arrived.

With Spectacles 3, how Snapchat is approaching 3D effects and lenses is more similar to Snap Shows than it is to snaps. Two camera angles are uploaded in raw to the cloud & brought to life through dynamic software — they could be rendered again, w/ better effects, years from now.

I mention Snapchat because it is the closest comparison to what TikTok is building through its mobile video suite. Like Snapchat, TikTok democratized effects that weren't possible just years ago — and it did the same to editing. Its future looks like Snap's dynamic pipelines.

Almost certainly, TikTok is re-encoding videos for low-connectivity markets. Their secret sauce, in how they inform creation in these markets, support them with efficiencies, and look to their future, is out of my depth. And that's my point about where we are right now.

Building the best product, on the longest horizon, means building far beyond what YouTube ever did, reaching to the lowest capabilities of the mobile camera, vacuuming up every data point produced by the mobile phone, and thinking about compatibility at every stage of the process

iOS does not differentiate your high-fidelity facial point-cloud from the RAW video from the camera. Unlike GPS, iOS does not limit capture of accelerometer and compass data. Great for AR! Nor does it limit common fingerprinting APIs, like locale, carrier, and region preferences.

The challenge of our time is that product builders are not just incentivized, but required, to vacuum up a lot of user information. Competing with Apple's ARKit means circumventing a lot of its safe guards, at the lowest OS levels, to remain competitive, and future-proofed.

The amount of data the industry collects, even under the best intentions because of limitations of chipsets or machine learning, unfortunately just means that the amount of data that bad actors could have access to has proportionally grown. We've architected an industry dragnet.

These questions of course become more pressing when an entity has questionable ties, w/o privacy scrutiny or transparency. But we're in for them to be raised from more angles than TikTok and China. We're backed into a corner; there is no obvious out, not with today's architecture

Building those filters & fun editing techniques may some day mean a Strava heatmap of your environment, of your life, of our soldiers, their bases, aircraft capabilities, flight plans, & rotations will emergence from the non-obvious aggregate. It feels like not an if, but a when.

These places used to be both physically & digitally gapped from the world. A handful of social media apps building for AR have almost certainly already surpassed the data thresholds to turn Cadet Chapel into an experiential AR lens. What does that mean for the less iconic bases?

Hashtags remain on TikTok after content is removed. It details a lot about BD’s censorship, but also, highlights that content tagged to 20 Air Force bases has been removed from the platform. The Pentagon may have reprimanded these soldiers, but TikTok still has the receipts 😉

Mobile-first video presents the distribution of new data that can wind up in unexpected places, used for unanticipated things, but it is of course only 1 more lateral in this industry crisis. Every data point, its collectors, and its aggregators matter.