I received a message from a family member in Iran (via social media) about 10 minutes ago...but Iranians still need your help and your voice.

We are resilient but we are also exhausted from decades (including during the Shah's reign) of tumult.

2. I used to be able to visit Iran whenever I wanted but I can't go back anymore. Due to my public profile, statements I've made (being gay not as much of a concern), & the prominence of my mom's family. I've been warned that I would be held back by Iranian intel services

3. I've also be warned that I can't visit Beirut, one of my favorite cities, for the same reason. Iran, through Hezbollah, is enormously powerful in Lebanon. Same goes for Turkey where I've been told my safety couldn't be guaranteed. There are other places, sadly.

4. My situation, while on the more extreme end, isn't unique. Other Iranians (perhaps your friends or colleagues) are in the same position. Cut off from our families and our culture. All we have is memories but those eventually start to fade.

5. Almost all of my family is in Iran. I've known nothing else my entire life. But in the past I've been able to see them. Most of the time I can deal with it, but when Iran is in the news as it has been in the past week I am filled with sadness as I grapple with reality

6. I've missed so much and will continue to miss so much.

I've missed so much that the details and life updates don't matter as much as just wanting to know if people are healthy and alive. Learning about college, weddings, etc seems like a luxury.

7. So that's why I suggested that you ask your Iranian friends and colleagues how they're doing and how their families are doing.

We've grown so accustomed to tumult and living a fractured life that so often we don't we realize how much pain and sadness we feel.

I will never see any of my mom’s cousins again (they were like aunts and uncles to me).

9. Again, this is a reality many Iranians have come to terms with but it doesn’t make it any less painful

10. Footage of Iranian authorities cracking down on citizens in Tehran.

It's cinematic and all too familiar.

11. Not a single word from House and Senate leaders about Iran on Twitter

Not a single word about the Supreme Leader shutting down the internet and essentially silencing 80 million people.

12. The only major presidential candidate to tweet in support of the Iranian people: Bernie Sanders.

13. Day 8 of the protests in Iran and just 15 percent of the internet has been restored yet all of the leaders listed in the two tweets above have not tweeted out support for the Iranian people

14. Secretary Clinton tweets in support of the Iranian people before some of the major Dem presidential candidates and House and Senate leaders

15. A reminder...as most Iranians don’t have internet due to government ordered shutdown, the Supreme Leader continues to tweet lies about protesters.

17. Heard from a relative who tells me the streets have gone quiet as protesters have retreated & even Iranians who weren’t protesting are staying indoors

18. The House and Senate Democratic and GOP leaders continue to remain silent on Twitter what’s happening in Iran.

20. Today, the Trump admin sanctioned Iran’s Minister of Information @azarijahromi for his role in shutting down the internet in Iran

How does he respond?

Jahromi has done nothing to advocate for access to the internet.

He brings shame on my father’s hometown 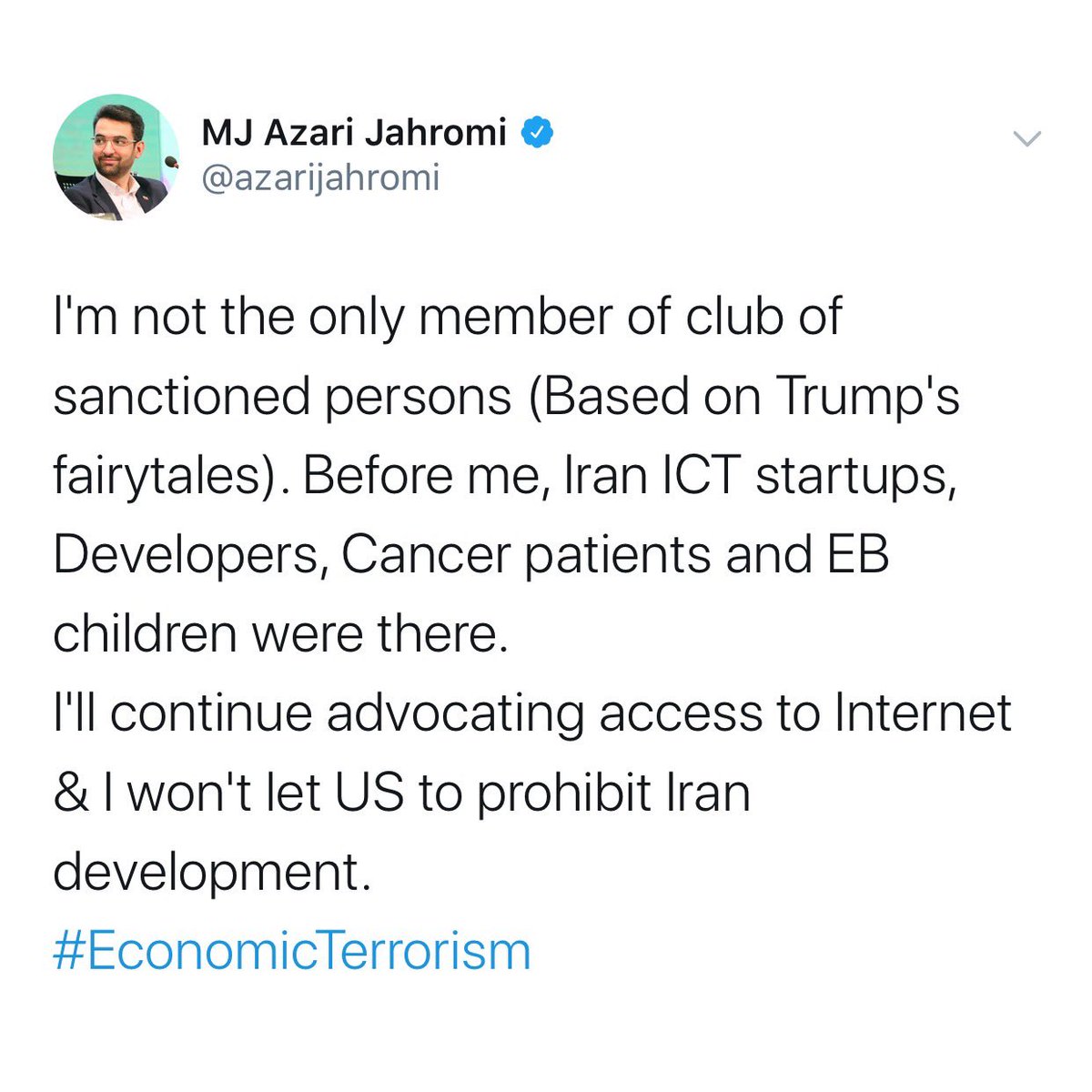 21. Now look at how Jahromi responds to the whole John Bolton Twitter drama. 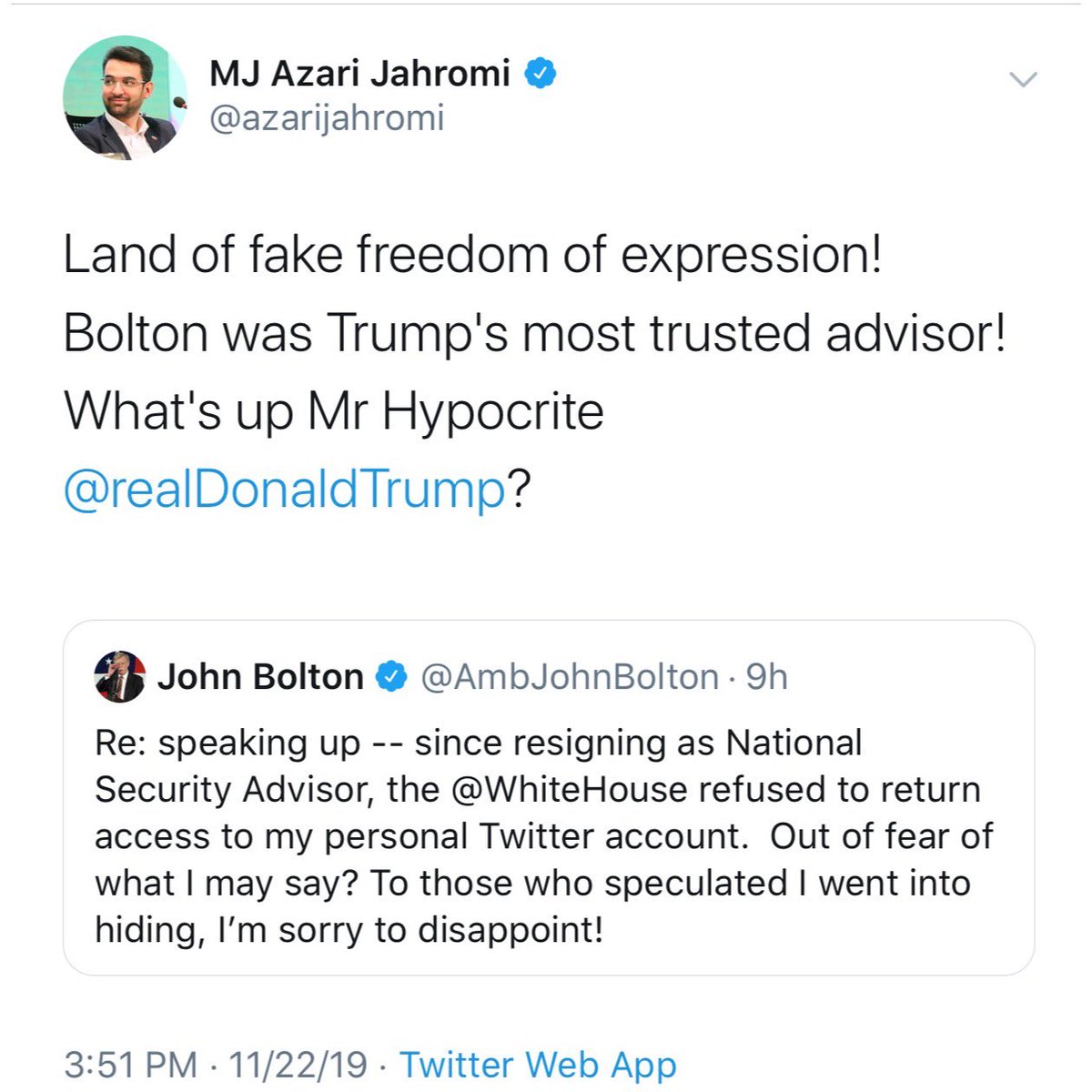 22. Elizabeth Warren has joined Bernie Sanders, Pete Buttigieg, and Kamala Harris in speaking out in support of the Iranian people.

23. This is what the intelligence agencies of the Islamic Republic of Iran do to our families.

@BBCFarnaz is a journalist at the BBC and now her father, who lives in Iran, is being interrogated by Iranian authorities because she happens to be a reporter 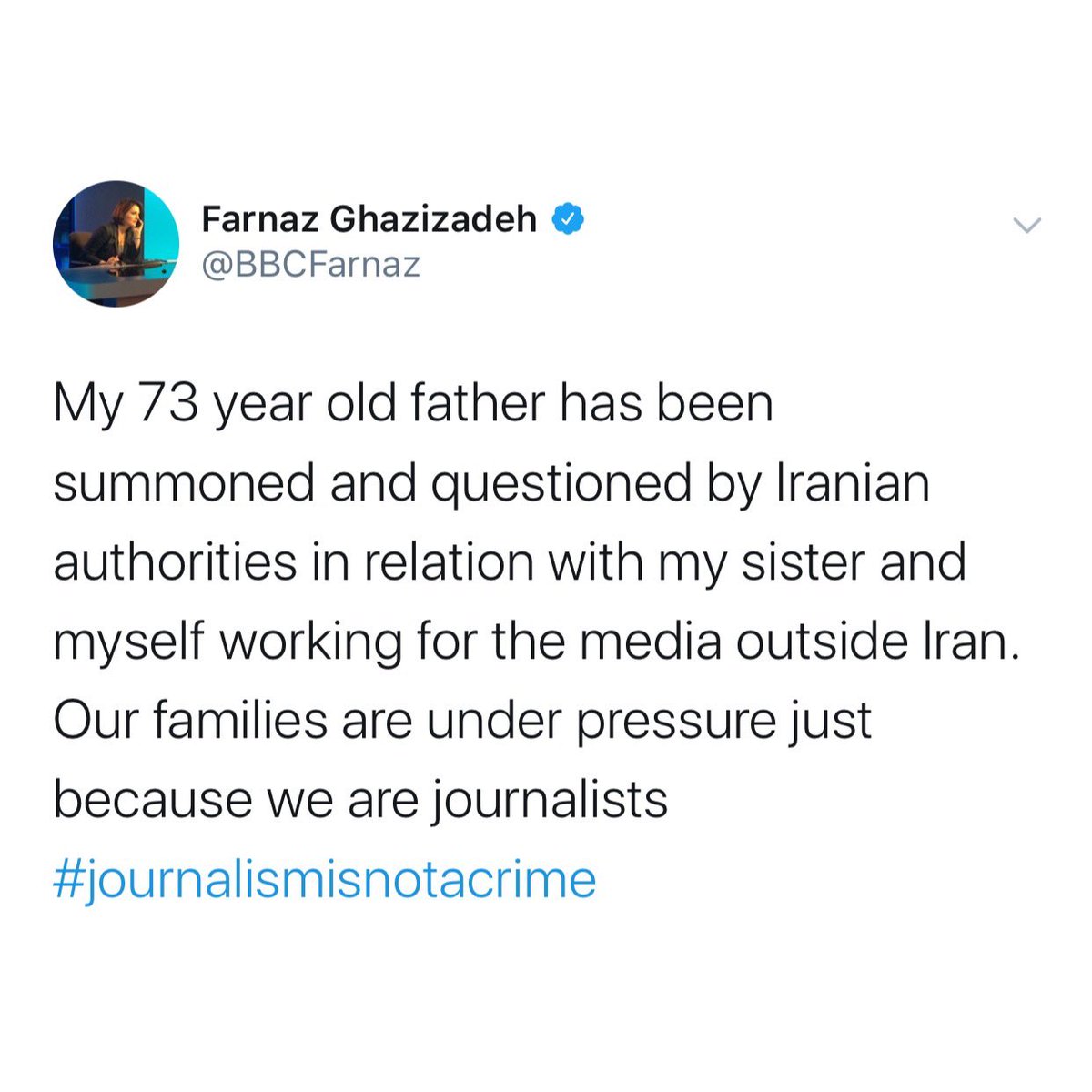 24. When I was younger, my mom would urge me to speak to my relatives in Iran by phone. I would almost always wave her off...I just thought it better to see them when we would visit Iran.

Now...not only will I not be able to see my family in-person, I can’t hear their voices

25. My mom would always say something like “you never know if this will be the last time.” She knew...she had become accustomed to losing family or being cut off from them

In the 70s, she couldn’t call Iran for years because the Shah’s intel agency would monitor her mom’s calls

26. My mom knew what it was like to get phone calls from home telling her that a relative had been executed in prison or when her brother threw himself under a truck to avoid being interrogated by the Shah’s CIA trained intelligence agency, SAVAK.

27. My mom was intimately familiar with the feeling of having family snatched away not due to a car accident or some illness but because they dared to defy an authoritarian government.

I didn’t heed her warnings because I was young and foolish...

28. Now I know why, even during the happiest times, my mom has always carried sadness with her. The governments of the country of her origin, a country she was always proud to be from, broke her down.

29. Message of support for the Iranian people from @SpeakerPelosi

30. With Joe Biden’s tweet, every major candidate from my list earlier in this thread has spoken out on behalf of the Iranian people

31. @GOPLeader and @SpeakerPelosi have now tweeted support for the Iranian people.

But the leaders of the Senate, @SenSchumer and @senatemajldr remain silent on Twitter