"I've got a story to tell you; it's all about spies. And if it's true, which I think it is, you boys are gonna need a whole new organisation."
John le Carré
Tinker Tailor Soldier Spy
(THREAD)

July 27, 2016: FBI’s Peter Strzok and Lisa Page discuss opening CI investigation on Trump.
Lisa Page: 'Have we opened on him yet?'
Peter Strzok: 'Opened on Trump'? /2 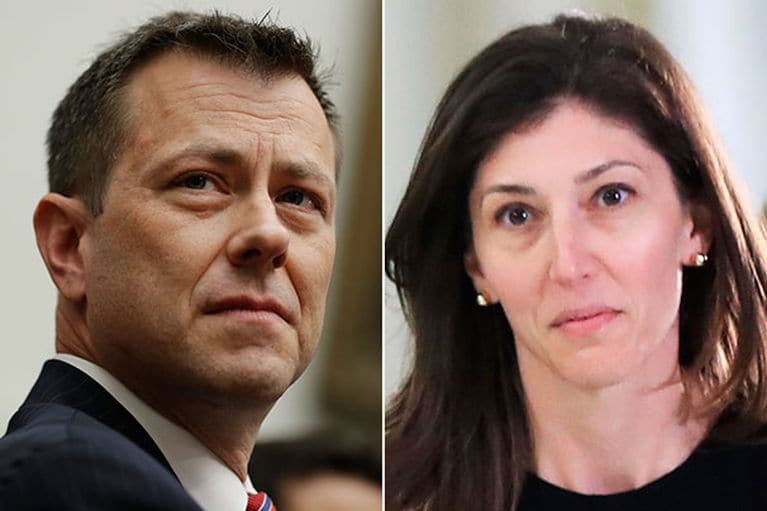 What intelligence were FBI going to use to open a CI investigation into a presidential candidate? Brennan: "I made sure that anything that was involving U.S. persons, including individuals involved in the Trump campaign, was shared with the bureau." /3 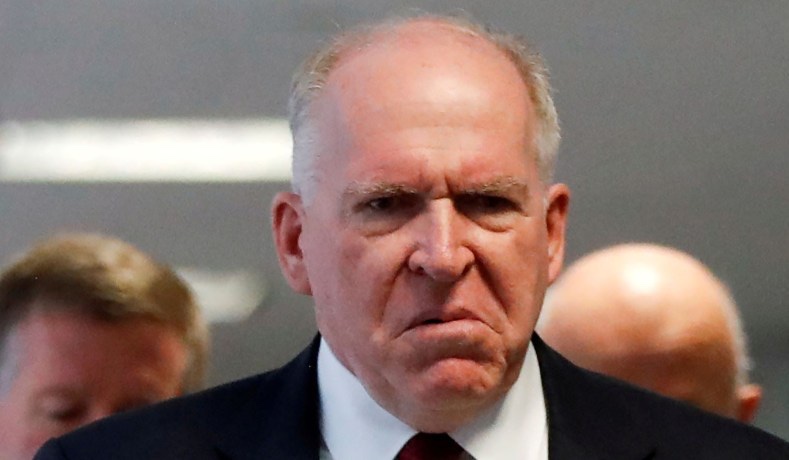 July 30, 2016: DOJ’s Bruce Ohr told by British spy Chris Steele that former head of Russian Intelligence informed him they had Trump “over a barrel”. /4 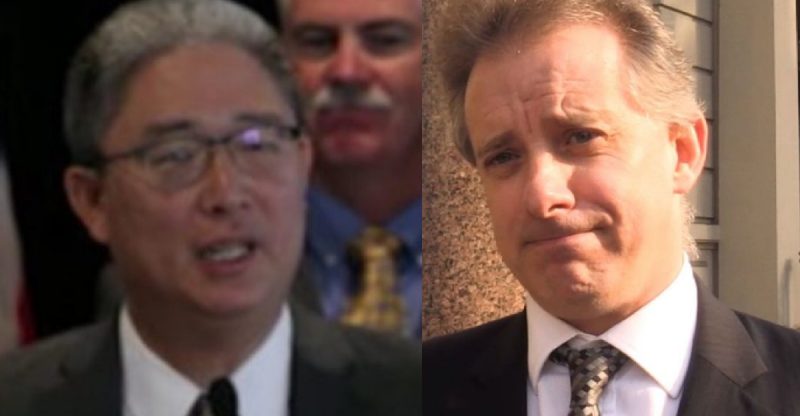 But how did Chris Steele come across such world-shattering 'intelligence' that presidential candidate is under control of Russia? Steele told Ohr at the Mayflower Hotel in Washington that the former head of the SVR "had stated [it] to someone". Who is that someone? 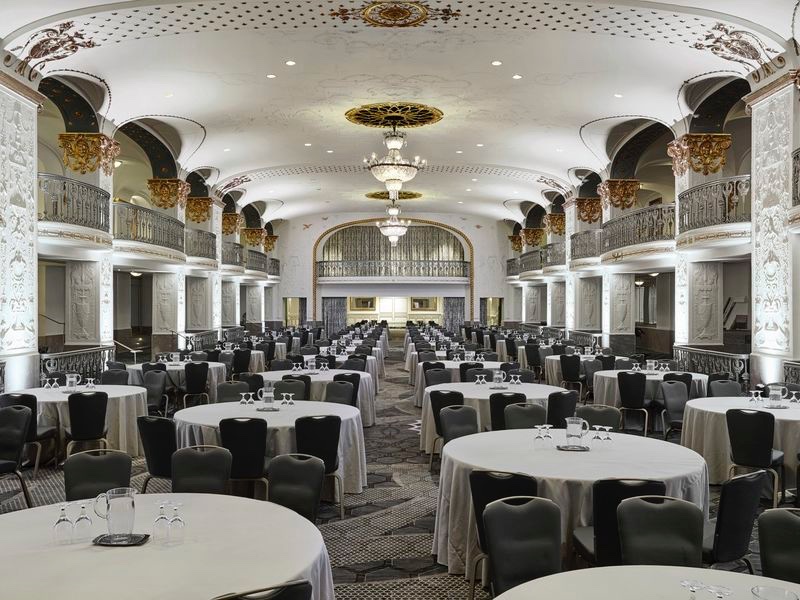 Steele has a bit of a fascination with the former head of the SVR: he appears as sources 'A' and 'B' in his dossier, both as a 'senior Foreign Ministry figure' and 'former top level Russian Intelligence officer still active inside the Kremlin' /6

Steele names the source (A, B) to State Department's Kavalec: Trubnikov, former head of SVR. Steele attributes to him the most explosive allegation: that "Russian authorities had been cultivating and supporting US Republican presidential candidate, Trump for at least 5 years' /7

And that 'the Trump operation was both supported and directed by Russian President Vladimir Putin'. But remember, Steele told Ohr on July 30, 2016 that he personally has not spoken to the former head of Russian intelligence but heard that information from 'someone'. /8

The 'intelligence' that Putin and Russian intelligence cultivated Trump is false, as proven by Mueller. We also know that Trubnikov is not the source because no way would such a valuable source's name would be revealed to State Department so openly. So who is the 'someone'? /9 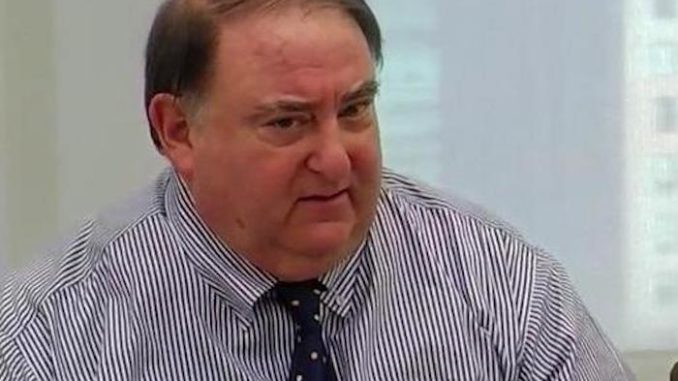 Stefan Halper had a number of contacts with Trubnikov. Trubnikov came to Cambridge twice on Halper's invitation, to teach and to give a lecture to a seminar co-convened by Halper. /10 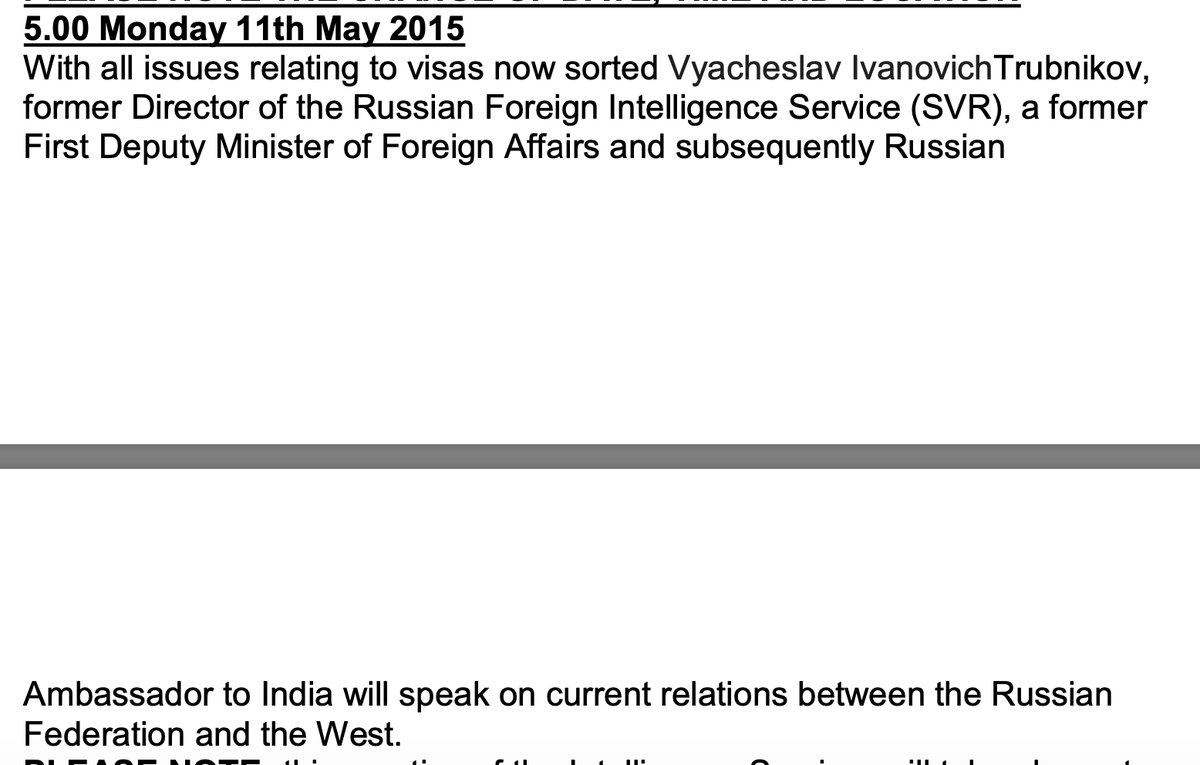 Crucially, in the Pentagon contracts, now under criminal investigation by Durham, Trubnikov appears as someone Halper claims to "interview" and pay in summer 2016--but didn't. (Here, Trubnikov is described as former Russian Deputy Foreign Minister and Ambassador to India) /11

On July 30, 2016 Crossfire Hurricane (Russia investigation) is launched against four Trump advisors but not Trump. It appears that Comey does not dare to start a CI investigation into a presidential candidate based on 'intel' from a single source, informant Stefan Halper. /12 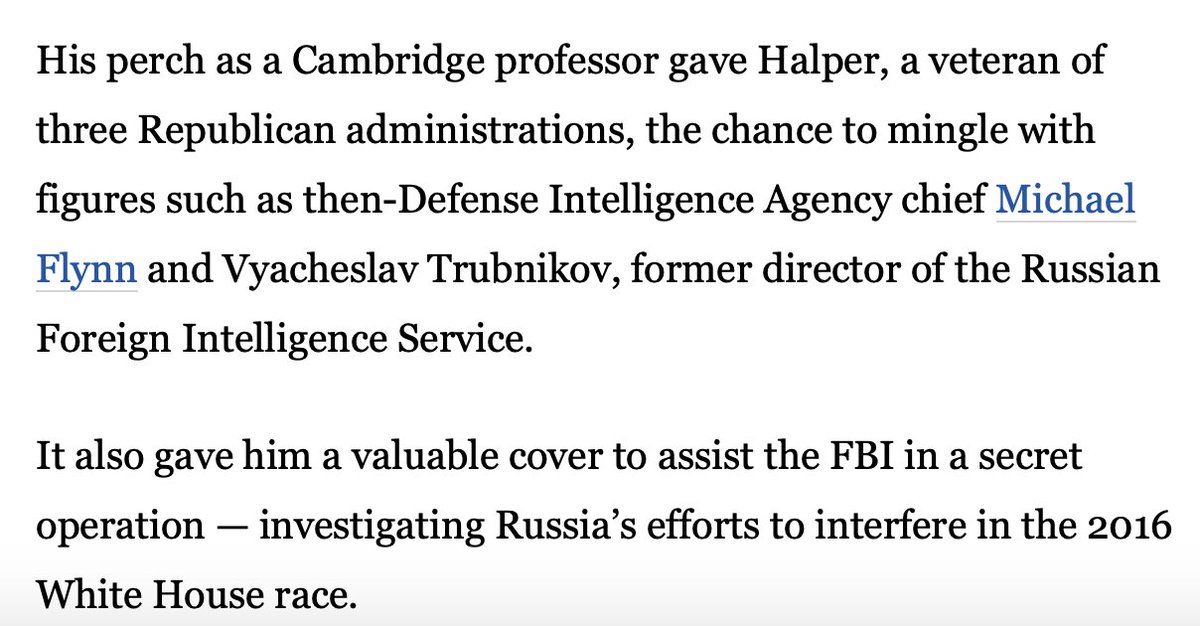 Brennan is not happy, Steele is not happy, Halper is not happy. What happens next? Brennan goes to Obama! The second part of the drama begins. Tune in later for more. /13 --break-- 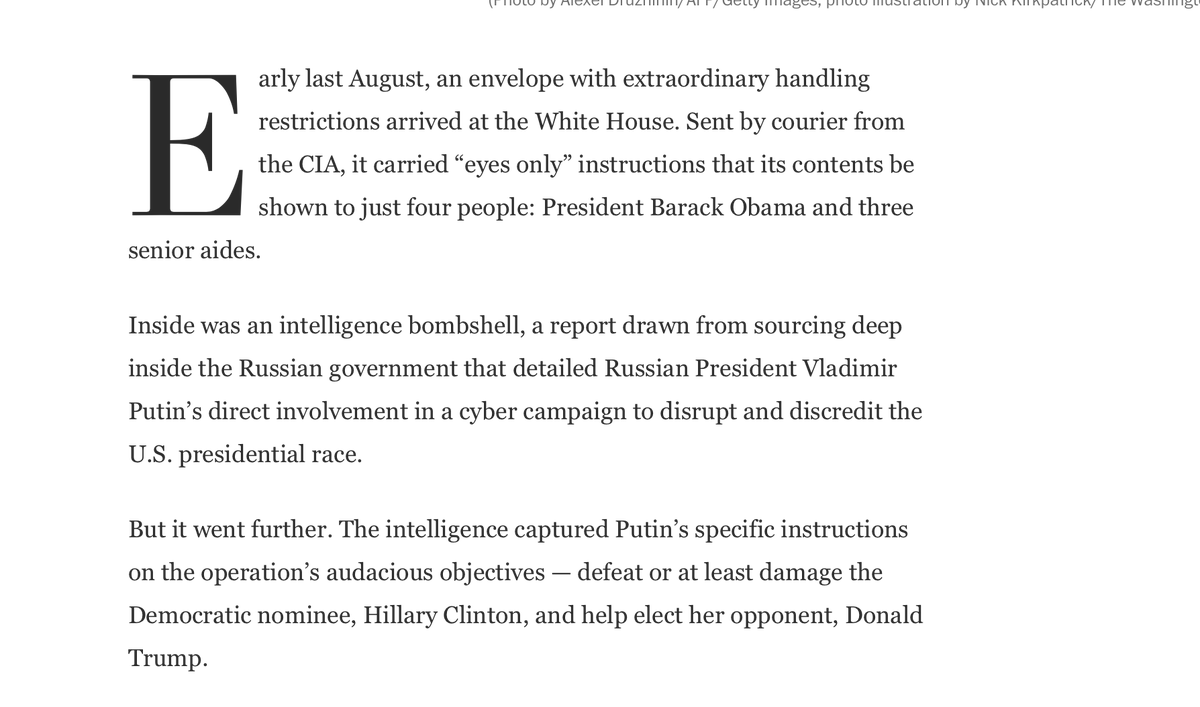 It's early August 2016, three months before the election. A courier arrives at the White House with an envelope from Brennan personally. For added drama, it's marked 'for eyes only' to be shown to just four people: President Obama, and his three senior aids. 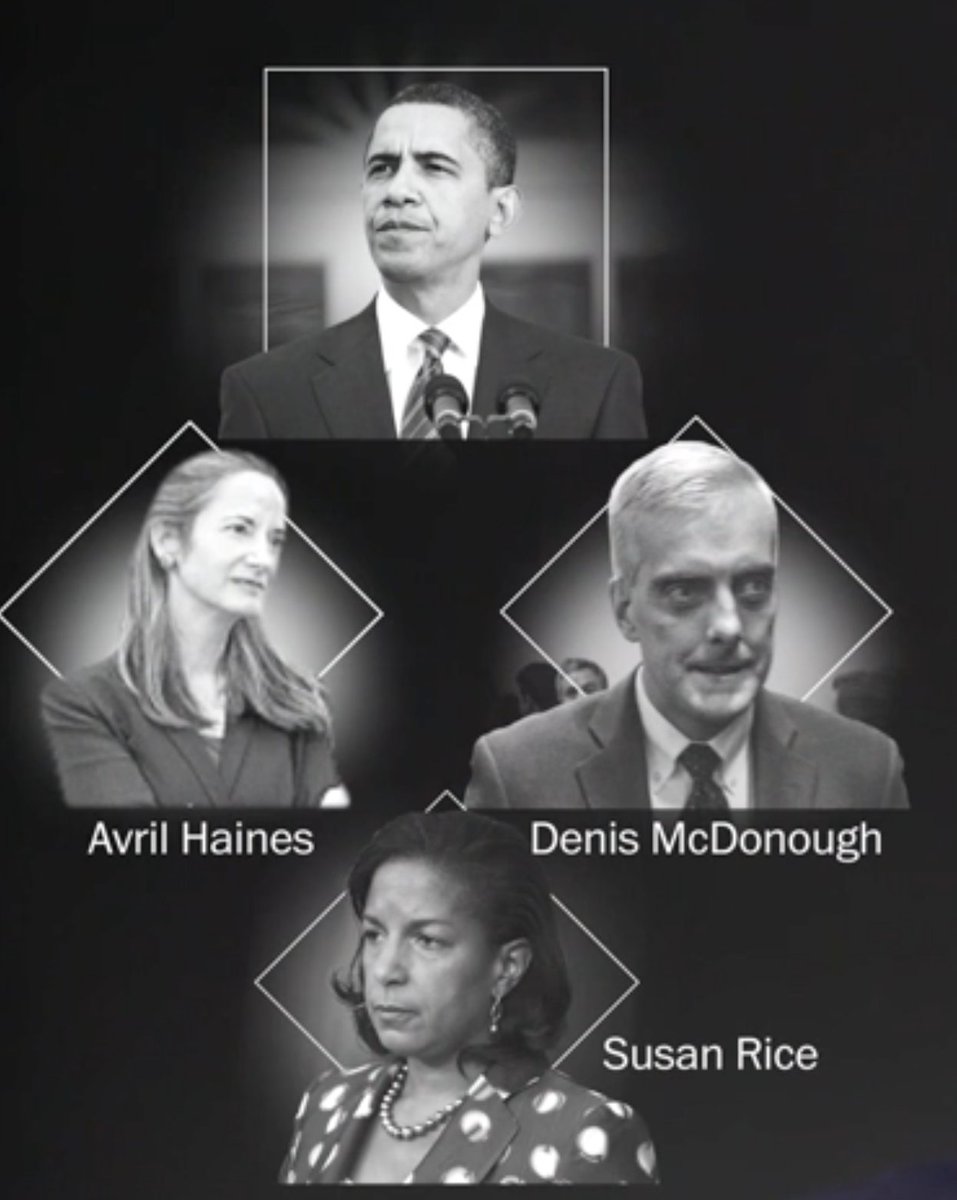 'Inside was an intelligence bombshell, a report drawn from sourcing deep inside the Russian government that detailed Russian President Vladi­mir Putin’s direct involvement in a cyber campaign to disrupt and discredit the U.S. presidential race.' /15 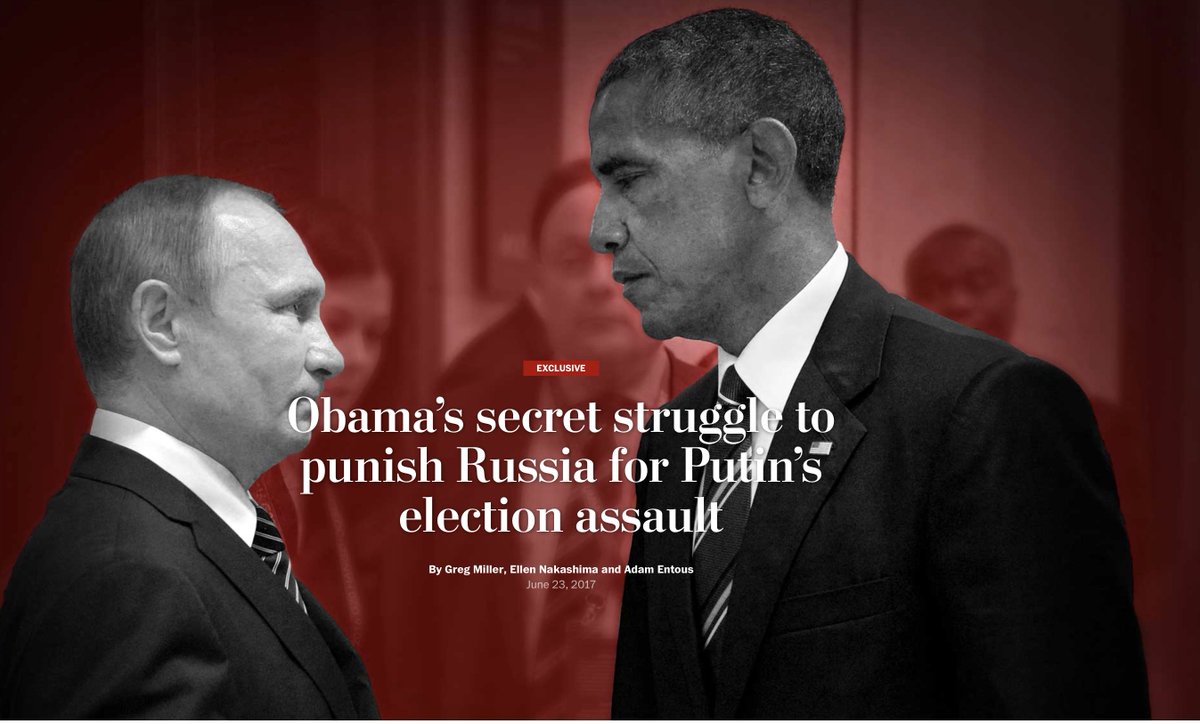 'But it went further. The intelligence captured Putin’s specific instructions [to his intelligence services] on the operation’s audacious objectives — defeat or at least damage the Democratic nominee, Hillary Clinton, and help elect her opponent, Donald Trump.' /16 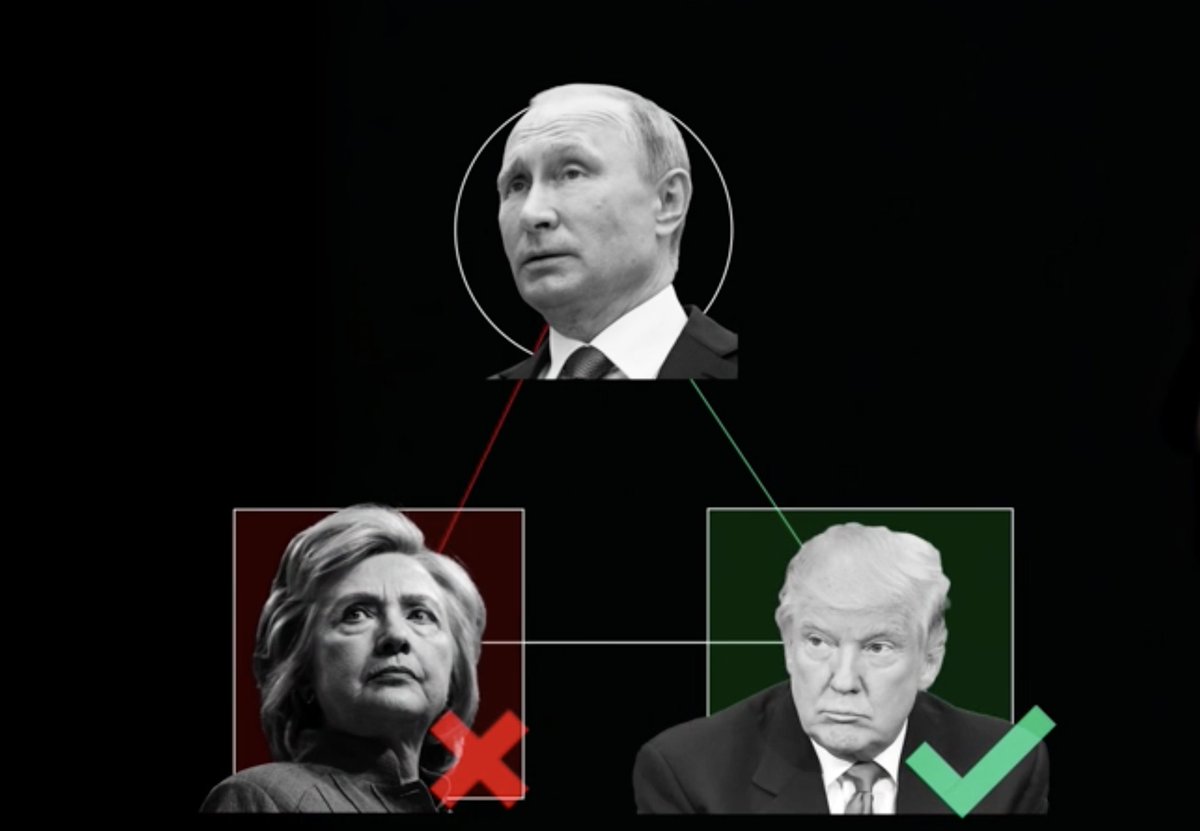 The CIA Director Brennan was convinced' that the intelligence from a source 'deep inside the Russian government' was as a smoking gun. /17 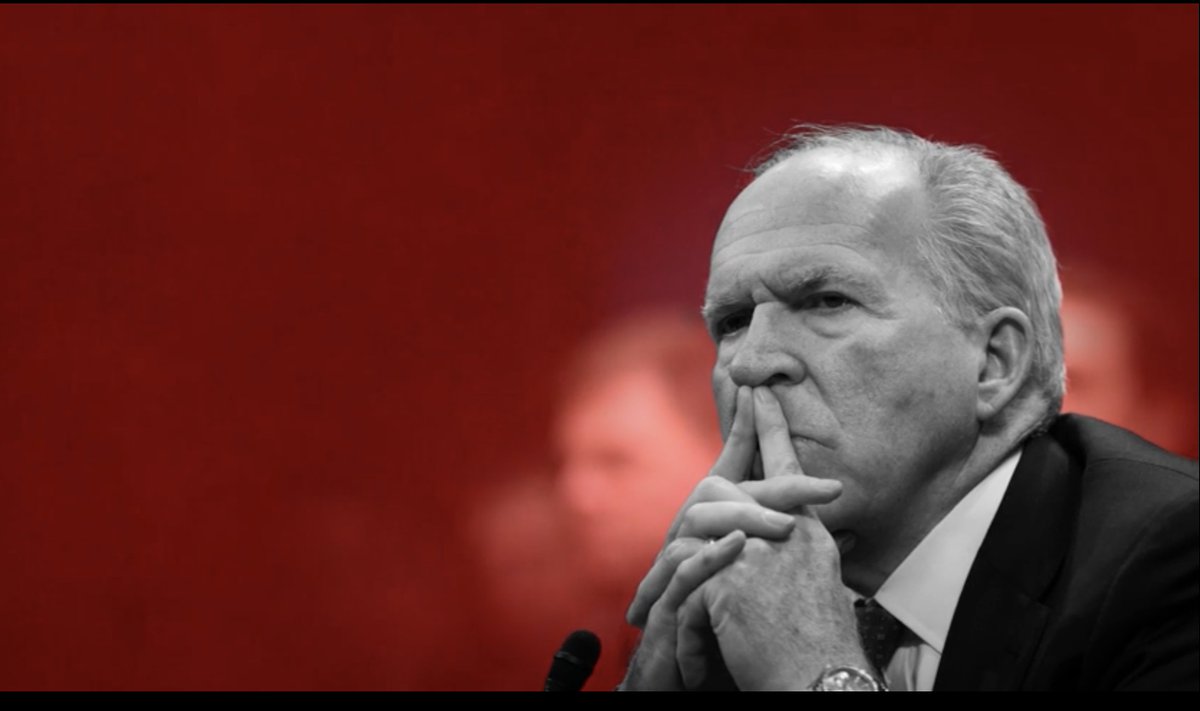 So who is this super-secret, high-up Russian intelligence source who revealed to the CIA Putin's master plan to destroy Hillary and help elect Trump? Who could it be? /18 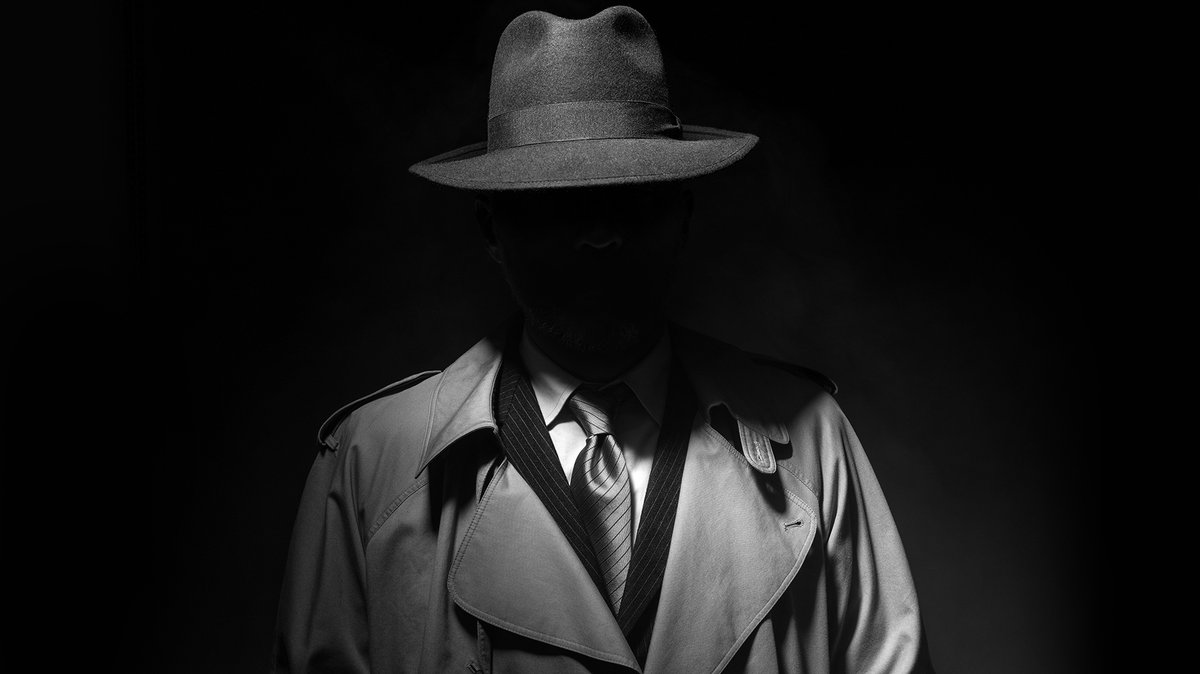 "The material was so sensitive that CIA Director John O. Brennan kept it out of the President’s Daily Brief, concerned that even that restricted report’s distribution was too broad. The CIA package came with instructions that it be returned immediately after it was read." /19 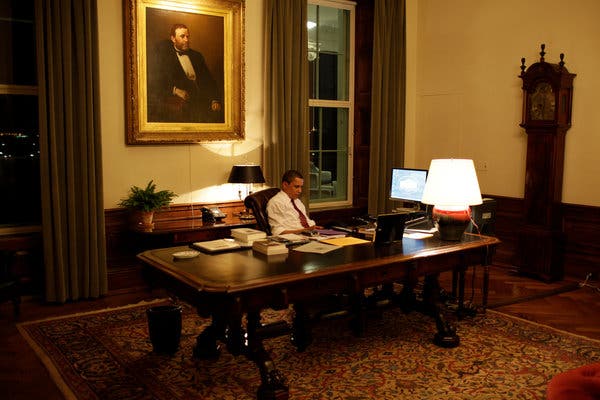 "To guard against leaks, subsequent meetings in the Situation Room followed the same protocols as planning sessions for the Osama bin Laden raid." /20 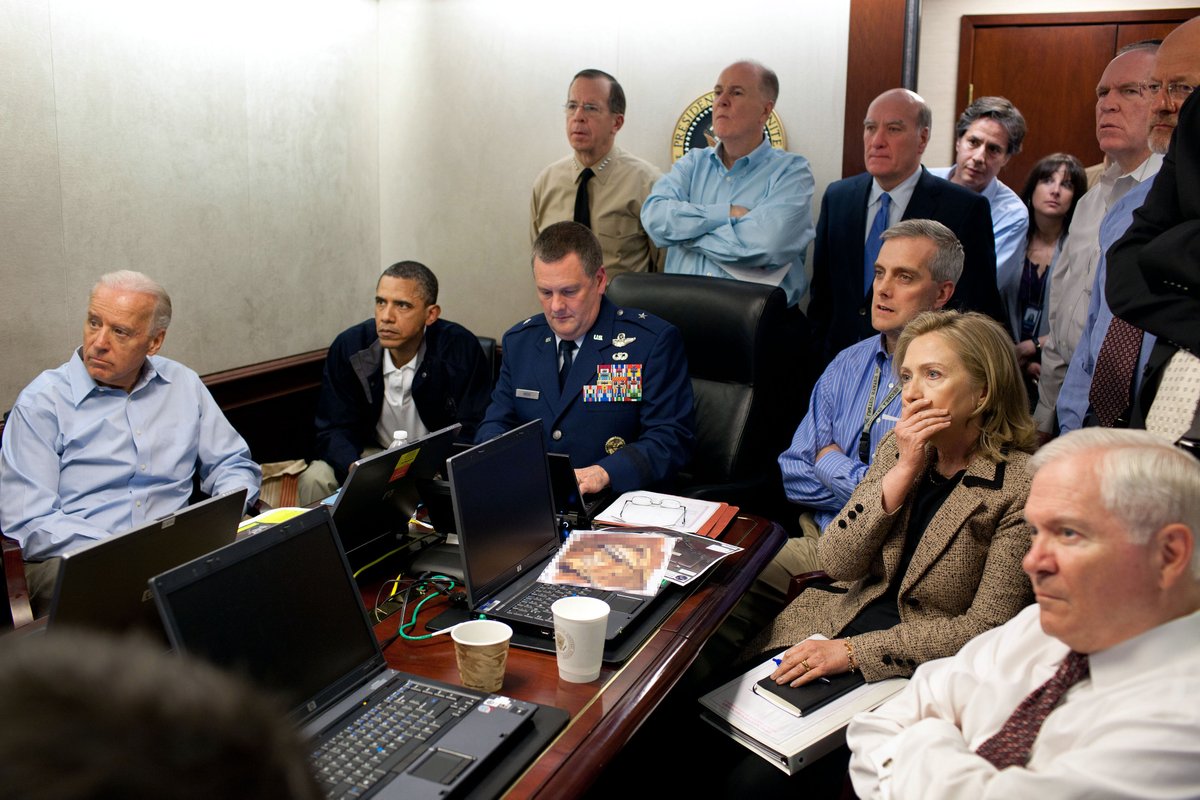 "The intelligence on Putin was extraordinary on multiple levels, including as a feat of espionage. For spy agencies, gaining insights into the intentions of foreign leaders is among the highest priorities. But Putin is a remarkably elusive target." /21 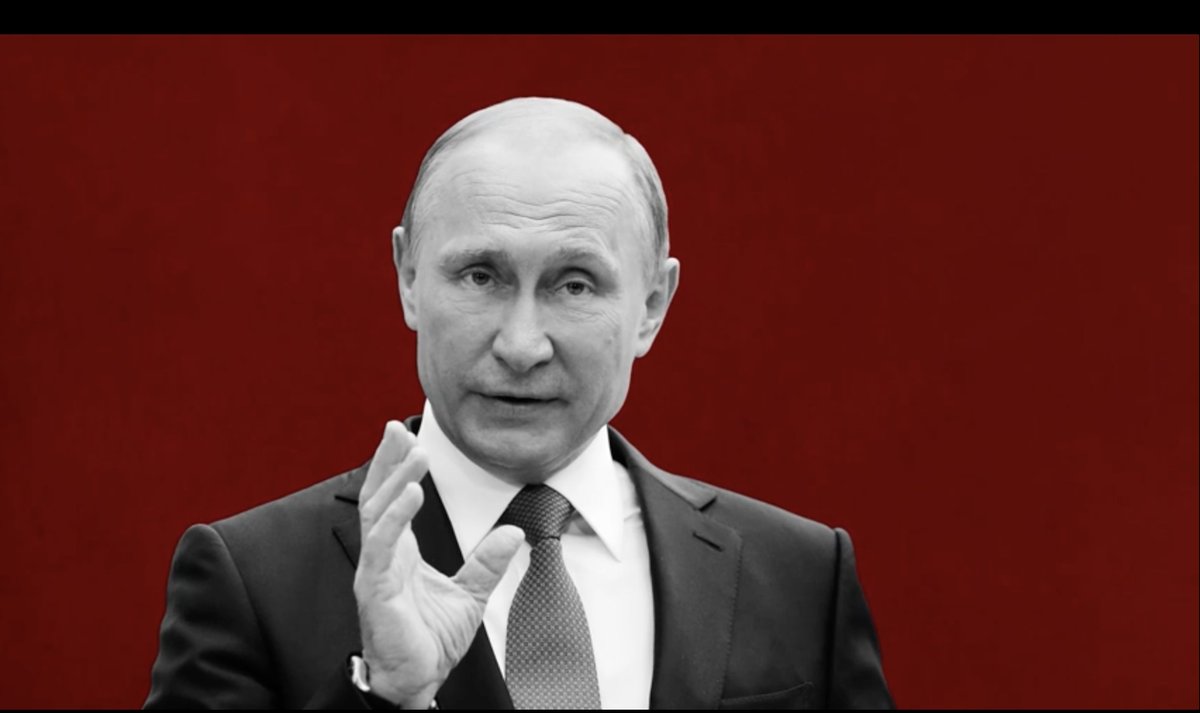 "A former KGB officer, he takes extreme precautions to guard against surveillance, rarely communicating by phone or computer, always running sensitive state business from deep within the confines of the Kremlin." /22 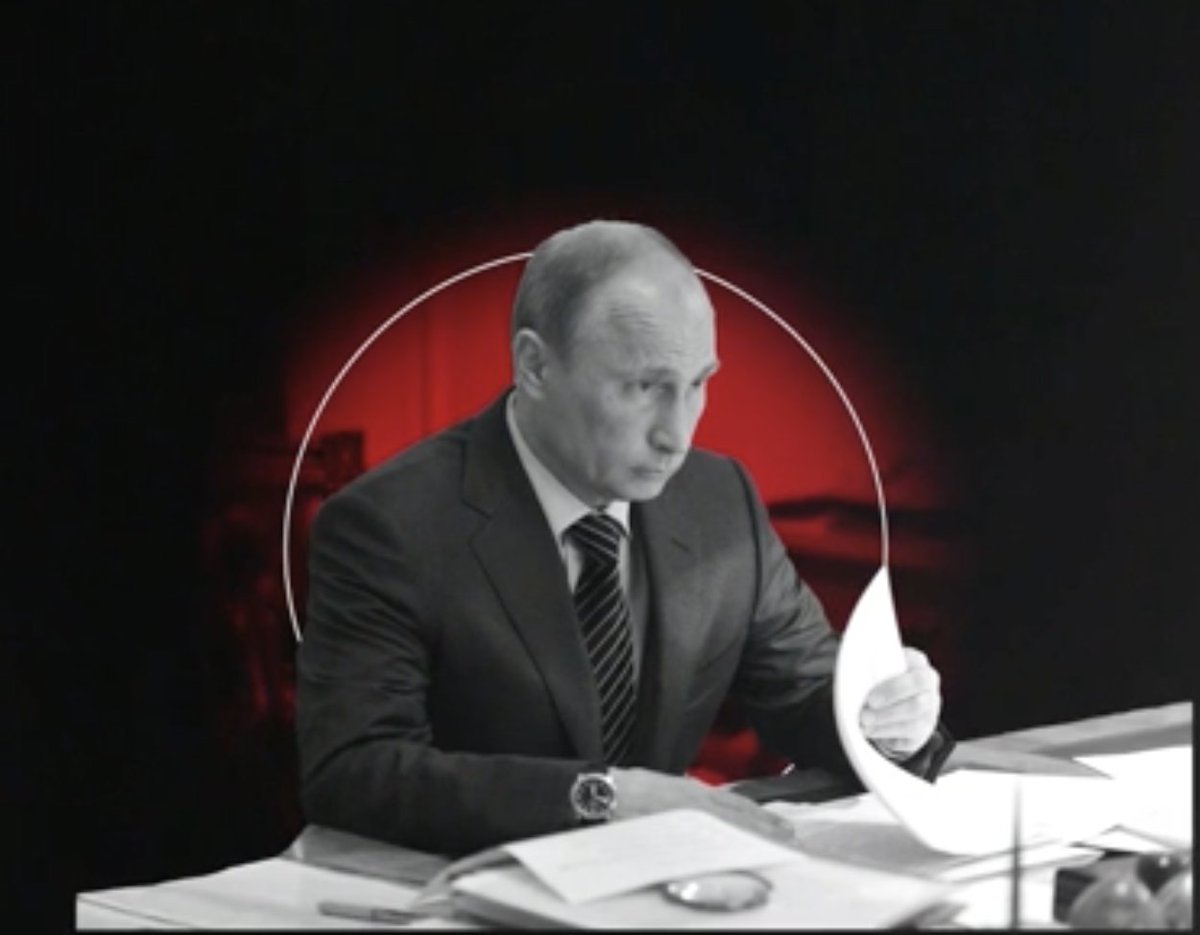 The Washington Post told us at length about CIA's greatest triumph. But two days before Brennan brought his bombshell intelligence to Obama, Steele was telling Bruce Ohr about the same "intelligence" and the "source". /23

Steele attributes to the same source, described as A and B in his 'Dodgy Dossier', the most outrageous allegations against Trump: that Putin personally cultivated Trump and helping him to win. This is exactly what Brennan told Obama. /24

Steele admits to Ohr that he has not spoken to the former head of Ru Foreign Intelligence directly, but we know that Steele's "collector" Halper has (see below). We know Halper gave intelligence to the FBI and to the CIA. Halper is the source. /25 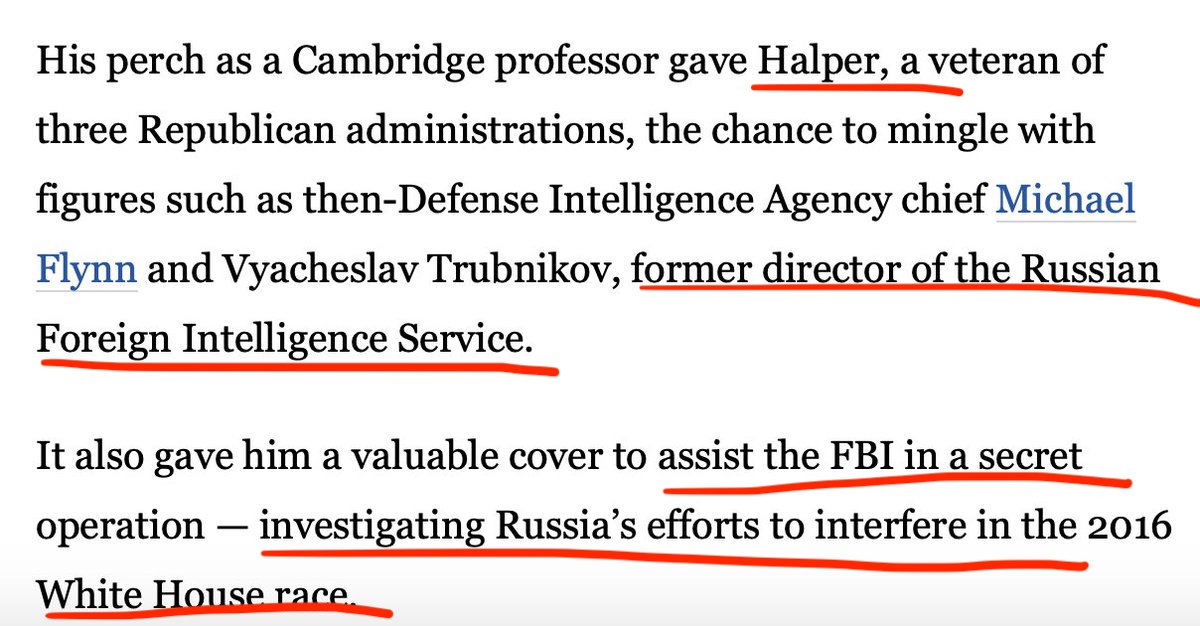 Despite all the drama, no-one believed Brennan. The only reaction to this "intelligence bombshell" is apparently Brennan calling the Russians and ask them to stop. Impressive? /26 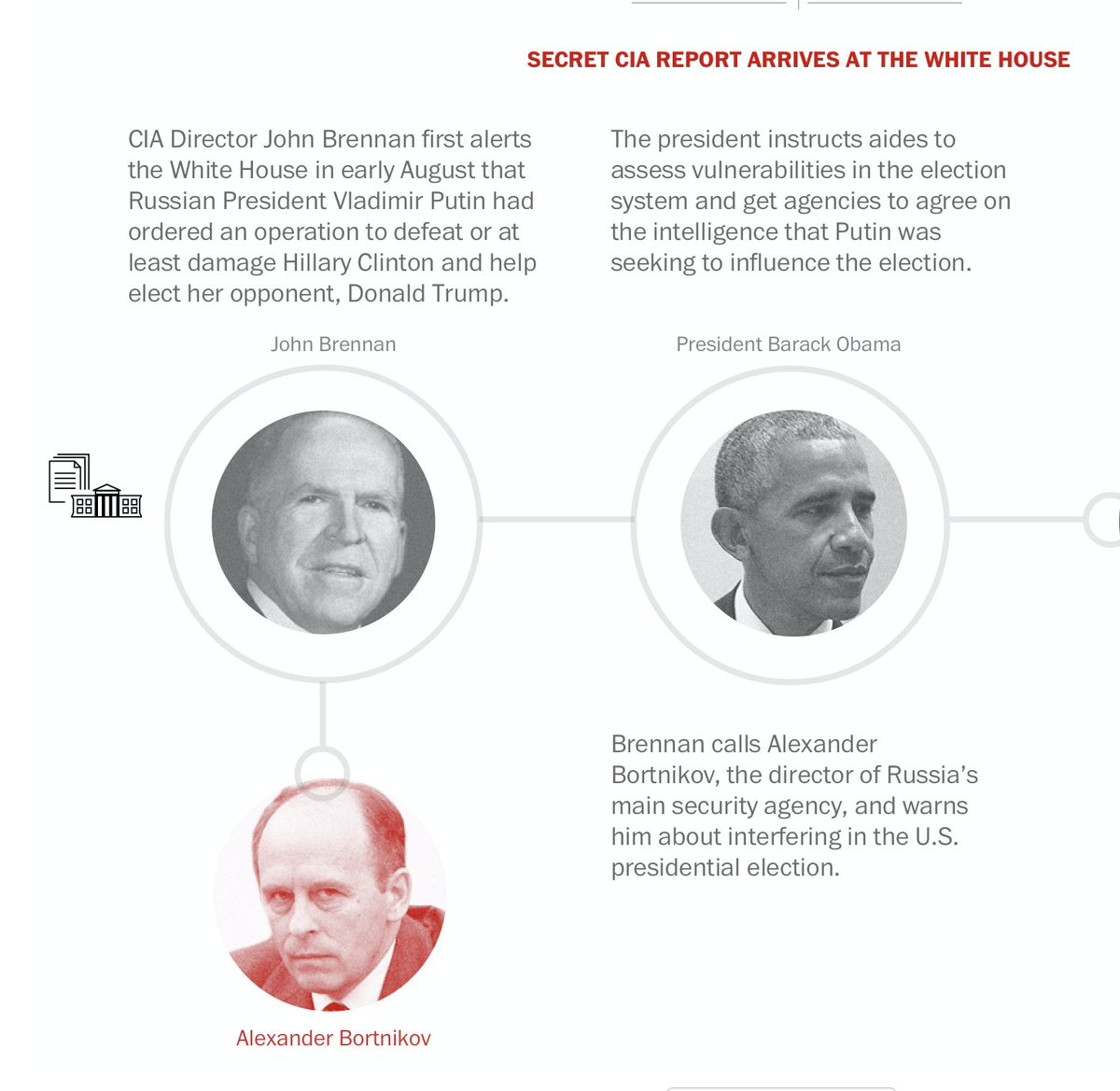 Halper’s fake “intel” about Trump being a puppet of Putin, falsely attributed to a Russian intelligence chief, was being being shopped by Brennan for months in the middle of 2016. No-one was buying it. Brennan,
Halper and Steele had to get creative. /26 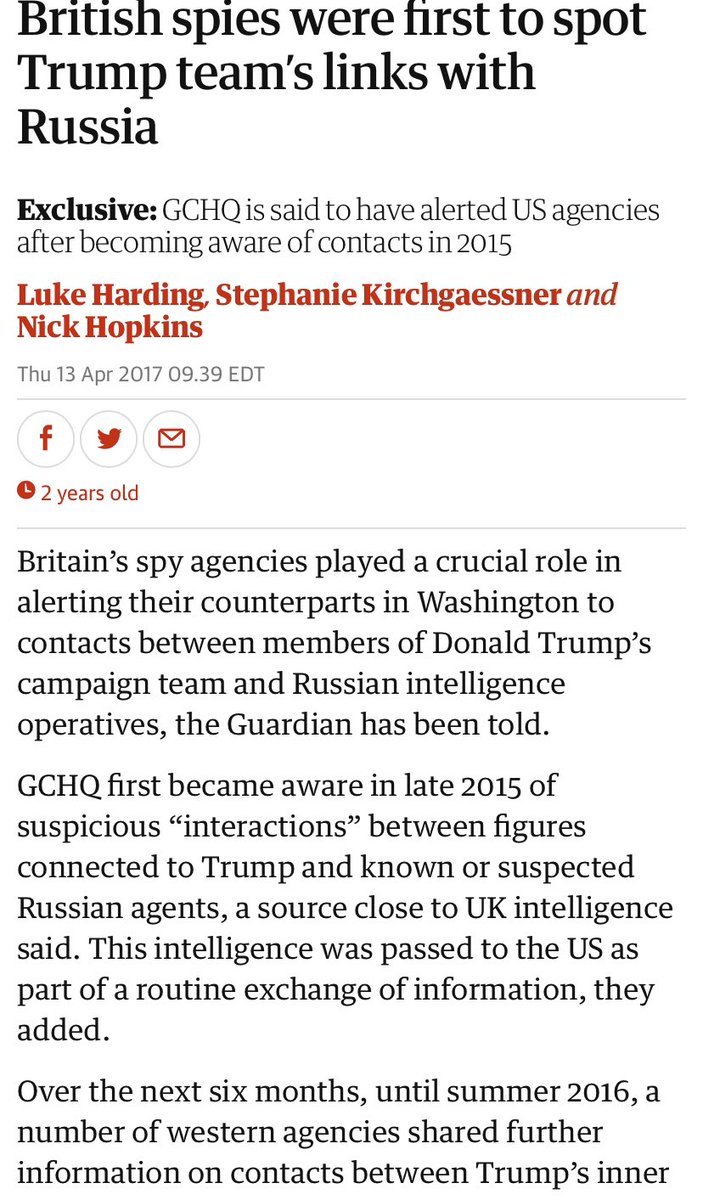