2. Producers began to see @itsgabrielleu as "difficult" almost immediately when Union told NBC that Simon Cowell's constant indoor smoking (which went on for years I'm told) was impacting her voice and health and that of staff/crew.

3. @itsgabrielleu was told virtually nothing could be done about Cowell's smoking as the fire marshall & others couldn't get him to stop

4. @itsgabrielleu would ask performers in drag what their pronouns were which annoyed/confused producers. I'm told by seven sources that Union was concerned about diversity to the point where producers saw it as inconvenient  http://bit.ly/2OPhajt

5. Despite indoor smoking being against the law in California, I'm told that Simon Cowell has smoked indoors for years. @itsgabrielleu was the first person to raise serious concerns about it and that did not go over well at all.  http://bit.ly/2OPhajt

6. Simon Cowell maintains near total control over "America's Got Talent," and for years he has mostly had (except @MrsSOsbourne) judges who did what they were told and didn't raise concerns about workplace incidents.

7. Over a number of months the tensions at AGT built up as @itsgabrielleu would flag concerns through NBC execs about workplace incidents.

8. Multiple sources tell me Gilmer got a great reaction from the audience at auditions. But in a meeting, @itsgabrielleu was told by producers that they wanted to eliminate Gilmer and pick a group of white high kicking dancers from Texas.  http://bit.ly/2OPhajt

9. When @itsgabrielleu objected to the decision to drop Gilmer, she was told by producers, according to multiple sources, that they needed to pick an act "America can get behind."

This infuriated Union I'm told because she saw it as racist framing.  http://bit.ly/2OPhajt

10. When Gilmer -- again, he's 10 years old -- was told he was being eliminated he collapsed on stage in tears (this footage never aired)

This upset @itsgabrielleu so much she stepped outside the theater to take a five minute break.  http://bit.ly/2OPhajt

11. When @itsgabrielleu returned inside, she was told that Simon Cowell was furious that she left to take a break and was summoned to his dressing room where she was told by Cowell (harshly, I'm told) that if she really wanted Gilmer he would keep him.  http://bit.ly/2OPhajt

12. In that same meeting, Simon Cowell asked her to come to him directly and not talk to NBC (which employed her) when she had concerns.

I'm told this made @itsgabrielleu feel like Cowell was trying to coverup workplace incidents. 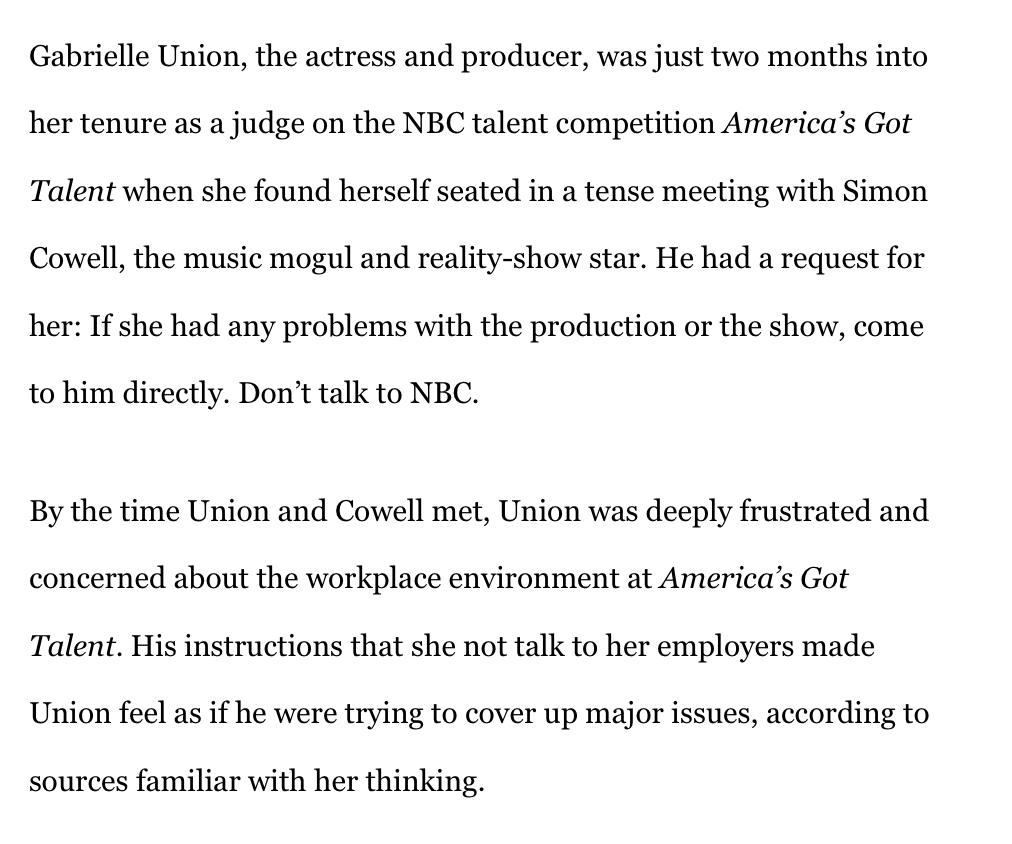 13. In the same meeting where 10-year-old black rapper Dylan Gilmer was discussed, a South African choir was brought up

When I asked NBC about this, they had no comment
http://bit.ly/2OPhajt

14. One of the major disconnects between @itsgabrielleu and producers of AGT is she was not only concerned about what aired on the program but also what the work environment was like and what audiences witnessed.

15. Example: a racist joke Jay Leno made while a guest judge. As Variety reported and I confirmed, during a taping, when a painting of Simon Cowell and five dogs was presented, Leno said "that looks like something on the menu of a Korean restaurant"
http://bit.ly/2OPhajt

16. Sources close to production told me that of course they would never air such a joke

But @itsgabrielleu's point was that she was concerned for crew members, staff, & others who had to hear the joke and wanted to know what NBC was going to do about it

First, sources close to the production (no one on record) dispute that @itsgabrielleu was fired. Here are the facts: Union had a three year contract with NBC. Each season, the network had the option to pick her up or drop her.

18. Last Friday, @itsgabrielleu's reps were told by NBC that they would be making changes to the judge lineup & that she wouldn't be returning

19. Previous judges, like @OfficialMelB and @heidiklum were judges for multiple seasons before being "rotated out"

@itsgabrielleu got one season before being essentially fired

Here's why the spin on this raises eyebrows and doesn't seem to make sense..

20. Ratings for network TV are down...so networks look to other metrics for advertisers

Social media numbers are critical. So critical sources tell me @itsgabrielleu had a social media clause in her contract requiring her to post on social media about AGT
http://bit.ly/2OPhajt

She was responsible for at least 50% of the social traffic

22. So that's why the sources I spoke to for my story have been befuddled

@itsgabrielleu gave NBC everything a network would want: huge numbers

I repeatedly asked NBC if there were any issues they had w/ Union & they said she was a pleasure to work with
http://bit.ly/2OPhajt

23. Sources close to the production talked to me about this "rotating out" stuff..to keep the show fresh

I'd buy that argument if it weren't for one critical element: Howie Mandel

24. So...Howie Mandel who provides little in terms of social media engagement (a key metric for networks now) gets to stay for years on end but women judges are rotated in and out of AGT.

A) I had seven sources for this story. My sources were inside/outside NBC

C) NBC had 36 hours to respond to a detailed list of questions I sent them
http://bit.ly/2OPhajt

26. Folks in the entertainment business normally stay quiet when it comes to stories like this. Stuff has to be really bad for them to speak out.

But support for @itsgabrielleu is emerging from big players.

27. The kicker in my story is the most critical detail:

@itsgabrielleu is exploring her legal options against NBC

"Now, Union is exploring her legal options against the network, according to sources close to the actress and producer."

28. The first public word from @itsgabrielleu after she was fired last Friday by NBC

29. Ellen Pompeo speaks out for @itsgabrielleu

Again, for a tv star at Ellen’s level to make a public statement against a network and someone at Simon’s level, is very rare. 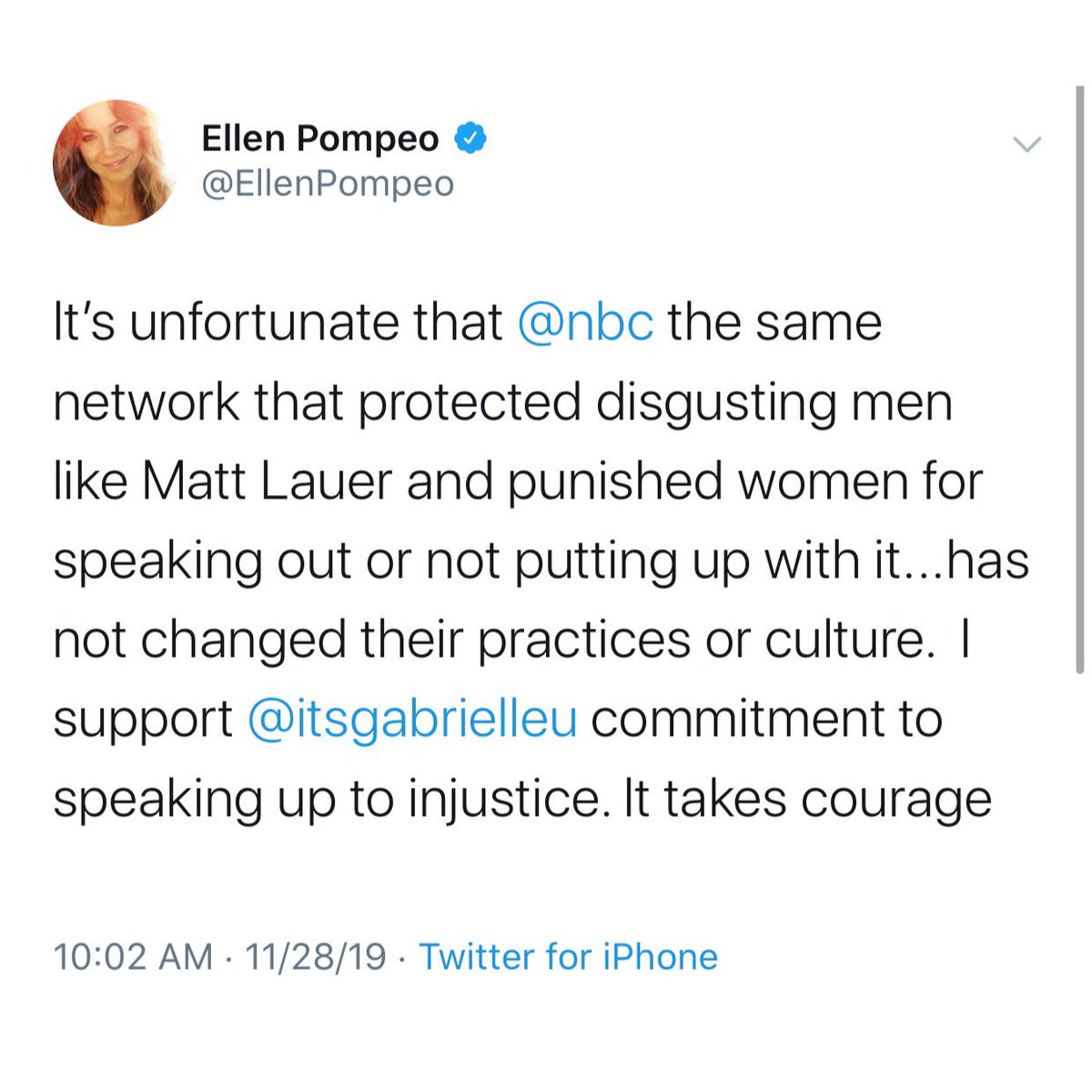 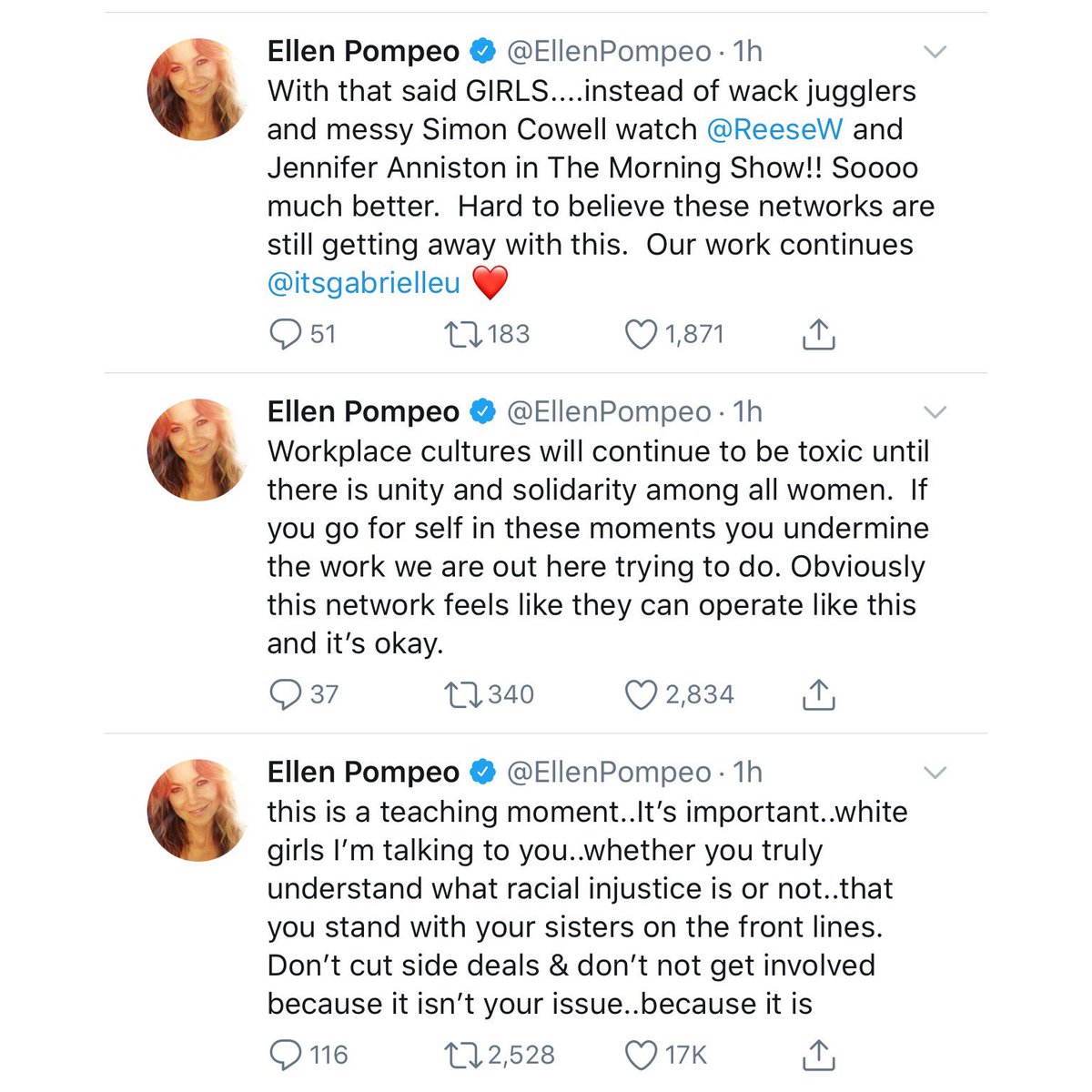 30. This morning I've heard from two industry sources who told me that @itsgabrielleu confided in them DURING the filming of America's Got Talent that she was concerned about the working conditions on the show. 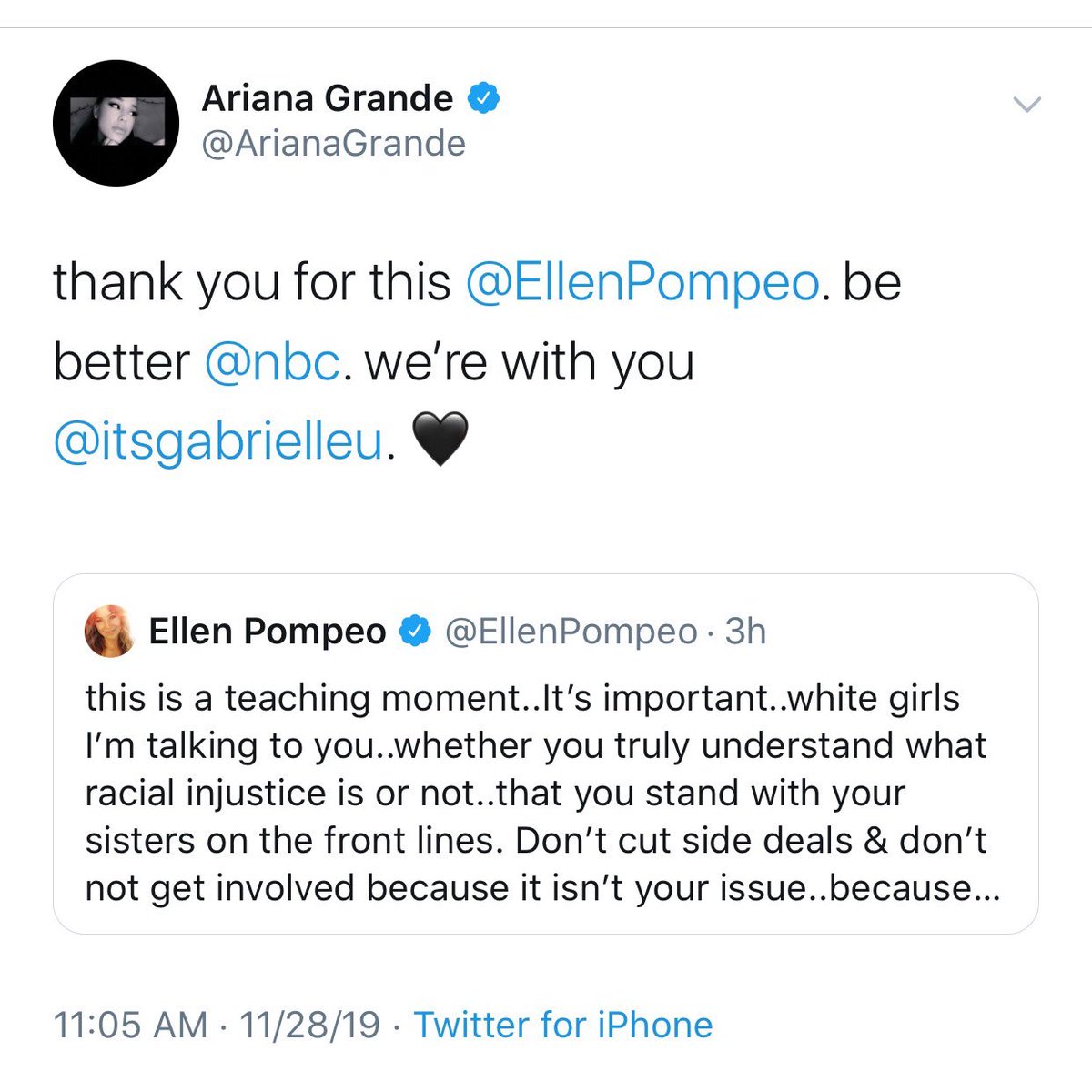 32. The host of America’s Got Talent @terrycrews is under fire for what many are saying is a lackluster tweet in support of @itsgabrielleu...especially considering how publicly supportive Union was of Crews a couple years ago. 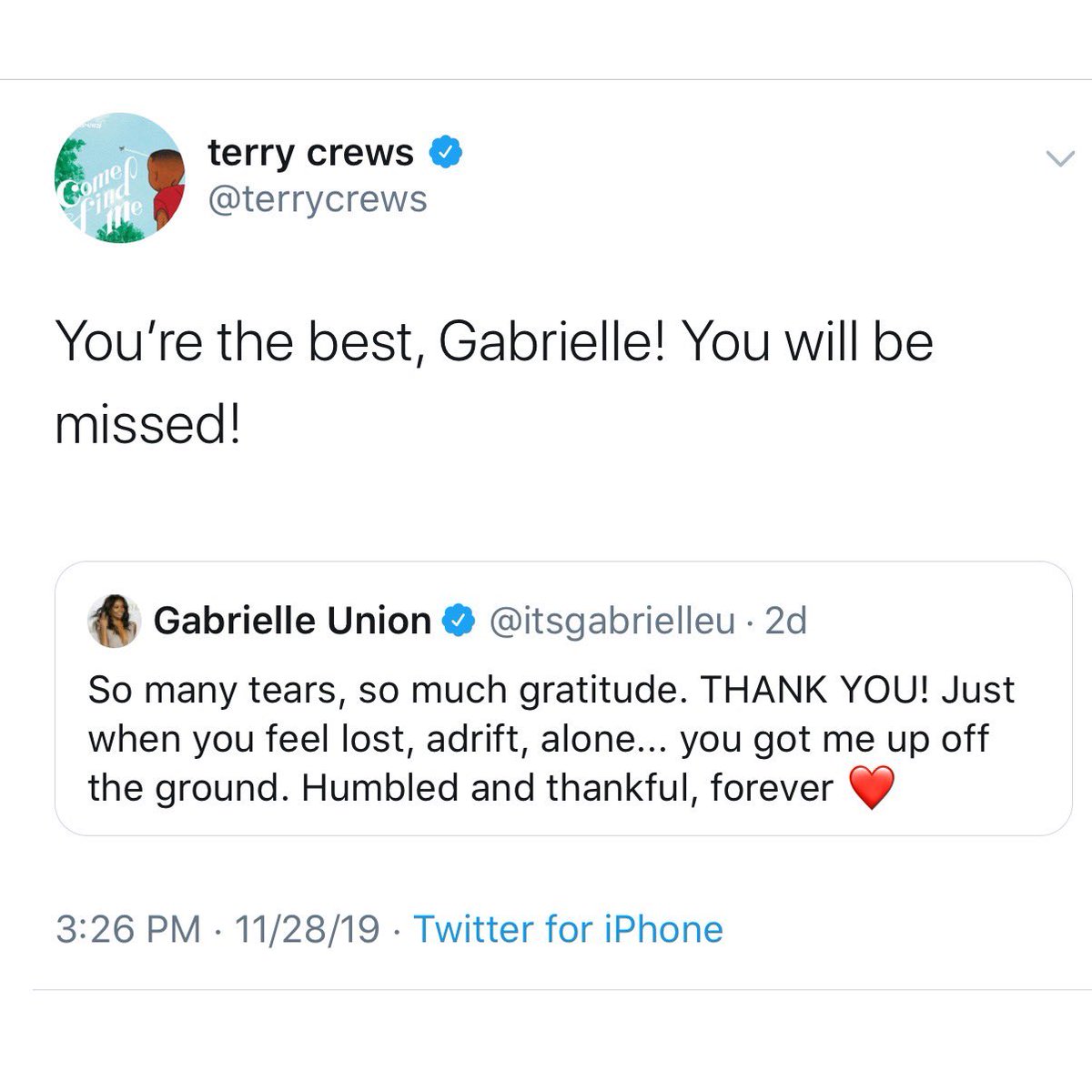 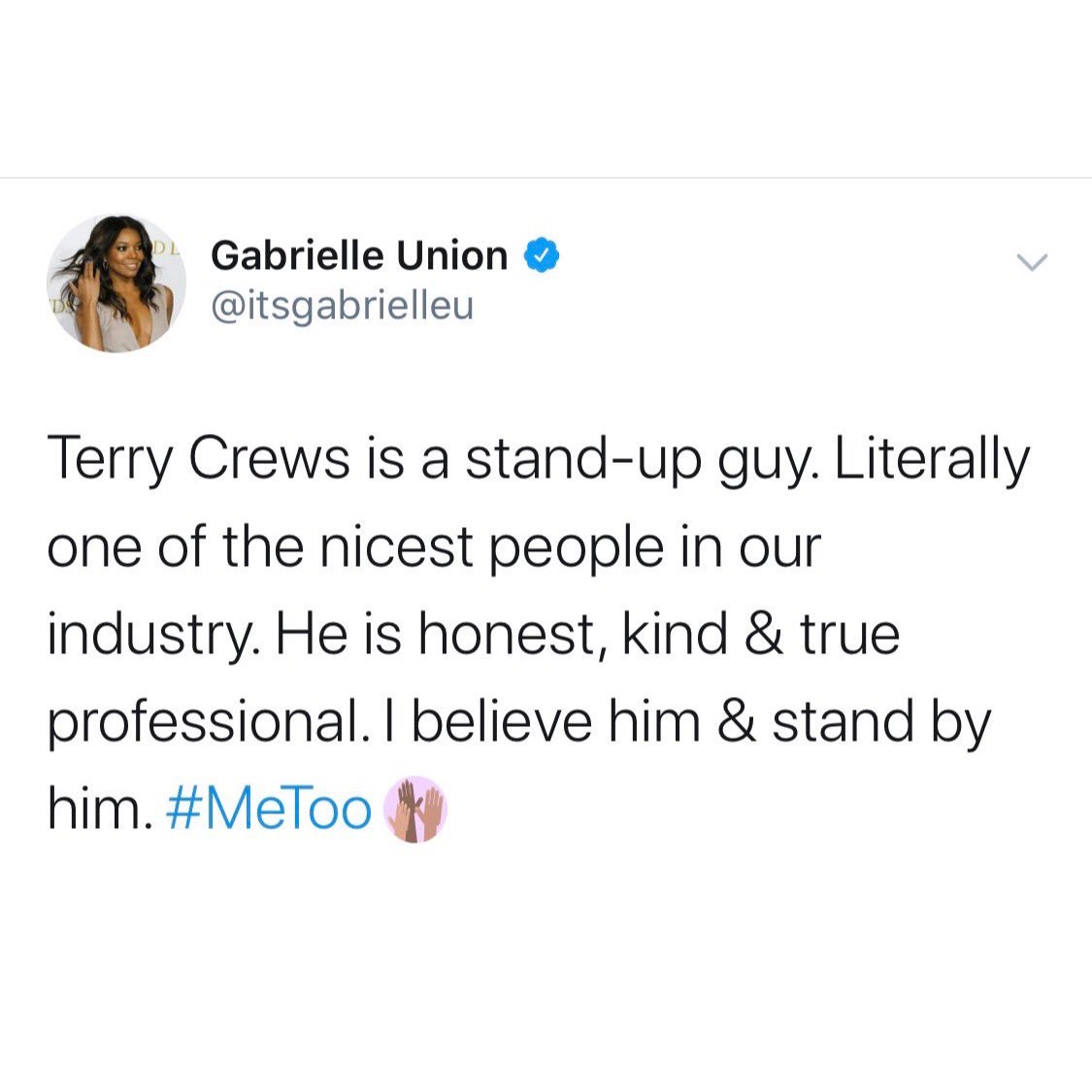 As I noted earlier in this thread, and in my story, @itsgabrielleu has been exploring her legal options. 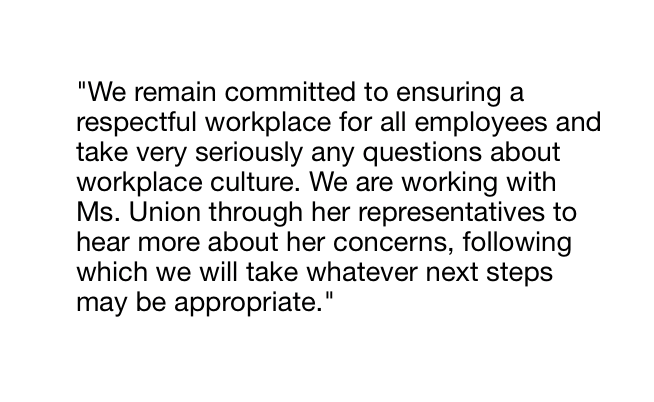 34. Jay Leno tells TMZ that @itsgabrielleu is a “great girl.”

He offers no comment on his racist joke or if she was fired unfairly.

35. @itsgabrielleu got some strong support from the women of the View today.

With @JoyVBehar @sunny @MeghanMcCain @HuntsmanAbby and guest host @YNB united in their support of her (very rare these days!)


36. An update from @itsgabrielleu on the NBC/America’s Got Talent situation

37. Just received this statement from NBC:

“The initial conversation was candid and productive. While there will be a further investigation to get a deeper understanding of the facts, we are working with Gabrielle to come to a positive resolution.”

The last statement was attributed to NBC, Fremantle (the America’s Got Talent production company) and SYCO (Simon Cowell’s company)

This statement is just from NBC