Everything in the #SilentSam case hinges on the (supposed) fact that the United Daughters of the Confederacy gave UNC a *conditional* gift subject to “reversion.” (Lay translation:UDC gave UNC the monument, but if a key condition changed later the monument flips back to UDC) /1

SCV and @UNC_System (and the court) agree that the key condition happened back in January when Chancellor Folt removed the plinth. The UDC’s condition was that the monument stand on McCorkle place *forever*. When that stopped, bang! the UDC owned the thing again. /2

Here’s the language in the settlement agreement that reflects what I’ve just said. (It's the bottom of one page of the agreement and the top of the next.) /3 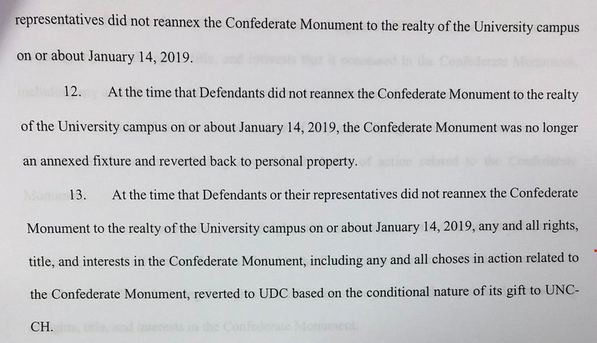 (And note: the UDC then turned around and tranferred all rights in the monument to SCV, which is the party that then sued UNC to regain possession of the monument.) /4

The settlement agreement cited some NC legal precedent for the proposition that a gift with a condition to a donee can revert to the donor if later circumstances cause the condition to fail. /5 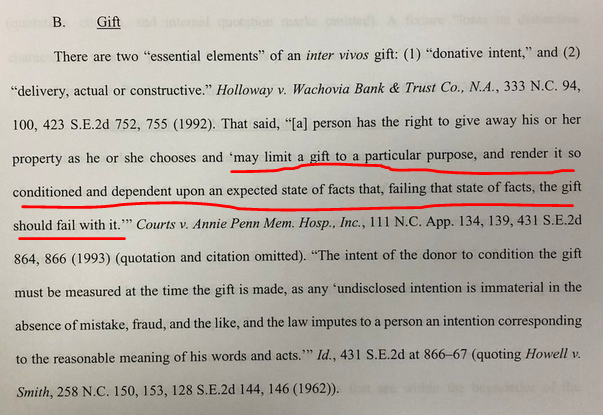 That is true – so far as it goes. The trouble is that it’s crucially incomplete. Note this language from the 1952 NC Supreme Court case called Ange v. Ange. /6

It’s saying that, yes indeed, people can condition gifts in our state, and they can say that breached conditions will end the donee’s ownership -- but they have to be really, really clear that that’s what they intend. “Apt and appropriate language.” /7

The settlement agreement doesn’t cite the case of Ange v. Ange, or mention this important proposition of law. /8

Neither does the settlement agreement cite the 1955 NC Supreme Court case of Charlotte Park and Recreation Com'n v. Barringer, which added the important principles you see in the attached passage. /9

But let’s be clear: there was no piece of writing of any kind memorializing the transfer of ownership of the monument from the UDC to UNC in 1913. No deed or other transfer of title. Not even so much as a letter saying, “We give you this monument – enjoy!” /11

There’s a reason the law likes (as the Charlotte Park and Recreation Commission case said) “some instrument in writing in express terms.” That’s so that people aren’t later left guessing about something as serious as a sudden change in ownership. /12

The settlement agreement doesn’t cite the Charlotte Park and Recreation Commission case, or the legal principles it states. /13

Now let’s turn back to our case. The settlement agreement describes the transfer in 1913 as “a gift subject to the express condition subsequent that the Confederate Monument remain annexed to the realty of the University campus ‘forever.’” Remember that word: “FOREVER” /14

Problem 1: we don’t have any “instrument in writing in express terms” at all, let alone one saying “UNC, you get this monument on the condition it remain on campus forever, and if that condition fails, it reverts to UDC.” /15

So what *do* we have to nail down that crucial condition and its draconian consequence of reversion? Here’s what the settlement agreement says. /16

One word. In a speech. On that one spoken word the SCV & UNC pile not just the idea that this stated a condition on the gift (a huge stretch) but also that if the condition is ever violated, ownership reverts to UDC (which is impossible to extract from that single word IMO). /17

I see no plausible argument in the settlement agreement for the propositions that (1) UNC lost ownership when the plinth was carted away and that (2) the UDC regained ownership. Indeed, NC law (that is, the principles the agreement omitted) points in the opposite direction. /18

Needless to say, I also see no plausible basis for the idea that the Sons of Confederate Veterans should also come into ownership of $2.5 million in U.S. (not Confederate) currency. /end