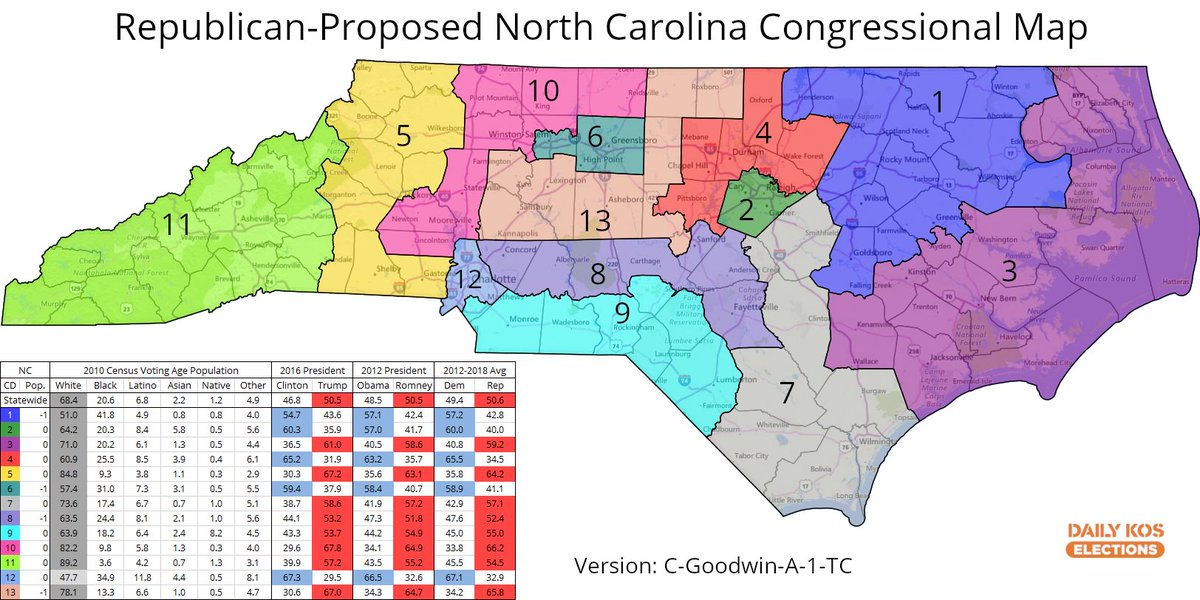 The plaintiffs could still appeal to the 6-1 Democratic NC Supreme Court. The lower court said there was insufficient time to redraw the maps for 2020 after the plaintiffs waited too late to sue, but the current map was redrawn in February of the 2016 cycle #NCpol #NCGA

If this map stands, it would lock in an 8-5 Republican advantage even in years such as 2018 when Democrats win more votes statewide. I've shown how this map is a gerrymander & how a fairer map could result in a 7-6 R or 7-6 D split:  https://www.dailykos.com/story/2019/11/15/1899654/-North-Carolina-GOP-enacts-new-congressional-map-but-litigation-remains-likely-to-continue … #NCpol #NCGA

At particular issue with the North Carolina GOP's new congressional gerrymander is how it cracks the Sandhills/Fayetteville region among two districts. A nonpartisan alternate could place that region in a single Dem-leaning district like this  https://www.dailykos.com/story/2019/11/15/1899654/-North-Carolina-GOP-enacts-new-congressional-map-but-litigation-remains-likely-to-continue … #NCpol #NCGA

On the bright side, Democrats would be practically guaranteed to flip two House seats (#NC02 & #NC06) under the GOP's new, less extreme congressional gerrymander, but the new map likely prevents Dems from winning a majority of seats  https://www.dailykos.com/stories/2019/11/15/1899654/-North-Carolina-GOP-enacts-new-congressional-map-but-litigation-remains-likely-to-continue …

Justice delayed is justice denied when it comes to redistricting. Rulings like this one allow legislators to get away with illegal gerrymanders for an election or two simply because litigation takes so long & taxpayers pay the cost

North Carolina’s court-supervised congressional redistricting is officially over. The GOP’s new map means Dems will gain 2 seats for an 8-5 GOP majority, but Dems have little hope of a 7-6 R or 7-6 D majority even if they win the popular vote like in 2018