In a lot of ways, TikTok represents the deep problems of social media most obtrusively; the SoftBank injection created an unstoppable firestorm and accelerative force that brought them to bear far quicker. This is true:

Equally concerning as the evident censorship, & the obvious Beijing power struggle behind the scenes, is the idea that TikTok dictates what you can & should see. It's a stale vacuum; it doesn't challenge power, or difference. It collapses on nothingness.  https://netzpolitik.org/2019/discrimination-tiktok-curbed-reach-for-people-with-disabilities/ …

More dangerous than the 'conspiracy' of someone in Beijing snapping their fingers is the air of that environment. Under that spell, it's the weak ideological lean to avoid confrontation — and challenges to power — that shapes the algorithms and moderation.

ByteDance has always over-sold itself as an AI company. Truthfully, it's the medium that shapes TikTok content; there is ML there, but it's not far off from YouTube's. The difference is that TikTok is steered. Like many Chinese companies, the mechanical turk is powered by humans.

I think the truth isn't that TikTok was trying to prevent cyber bullying (though that's a good talking point for Melania), but rather, Auto R was designed to stop these thumbnails — of a known & banned TikTok predator — in the wake of the SoftBank tsunami.  https://youtu.be/rFNDa48eYbE 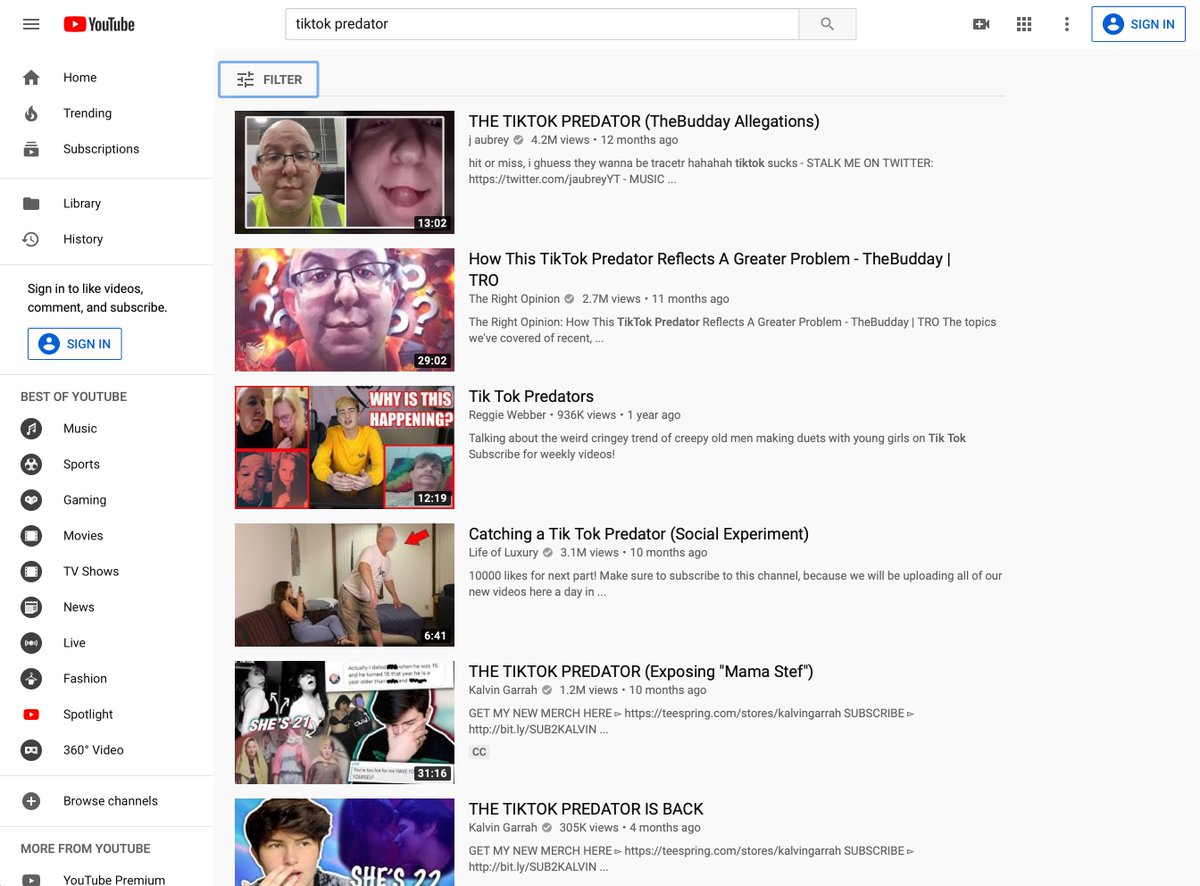 I think TikTok still has a predator problem, but it remains less visible — TikTok leaned away from what can only be called the 'exotic' guys. Is the cowboy & uniform erotica still around? Are way-too-young girls still reaching out because of it? Probably.

TikTok has made waves & adapted to solve that problem, but truthfully, I think ByteDance is just saving face. They fear those YouTube thumbnails, not the young users on the other side of the phone from predators aided by the algorithm. TikTok's graph brings the vulnerable to them

On that note, it's not just TikTok saving face, sadly. For my age-verified account, The Right Opinion's TikTok Predator video ranks No. 5 under 'tiktok' on YouTube; it doesn't when you're logged out. The warning is deemed controversial & disappears from the algo research crawlers 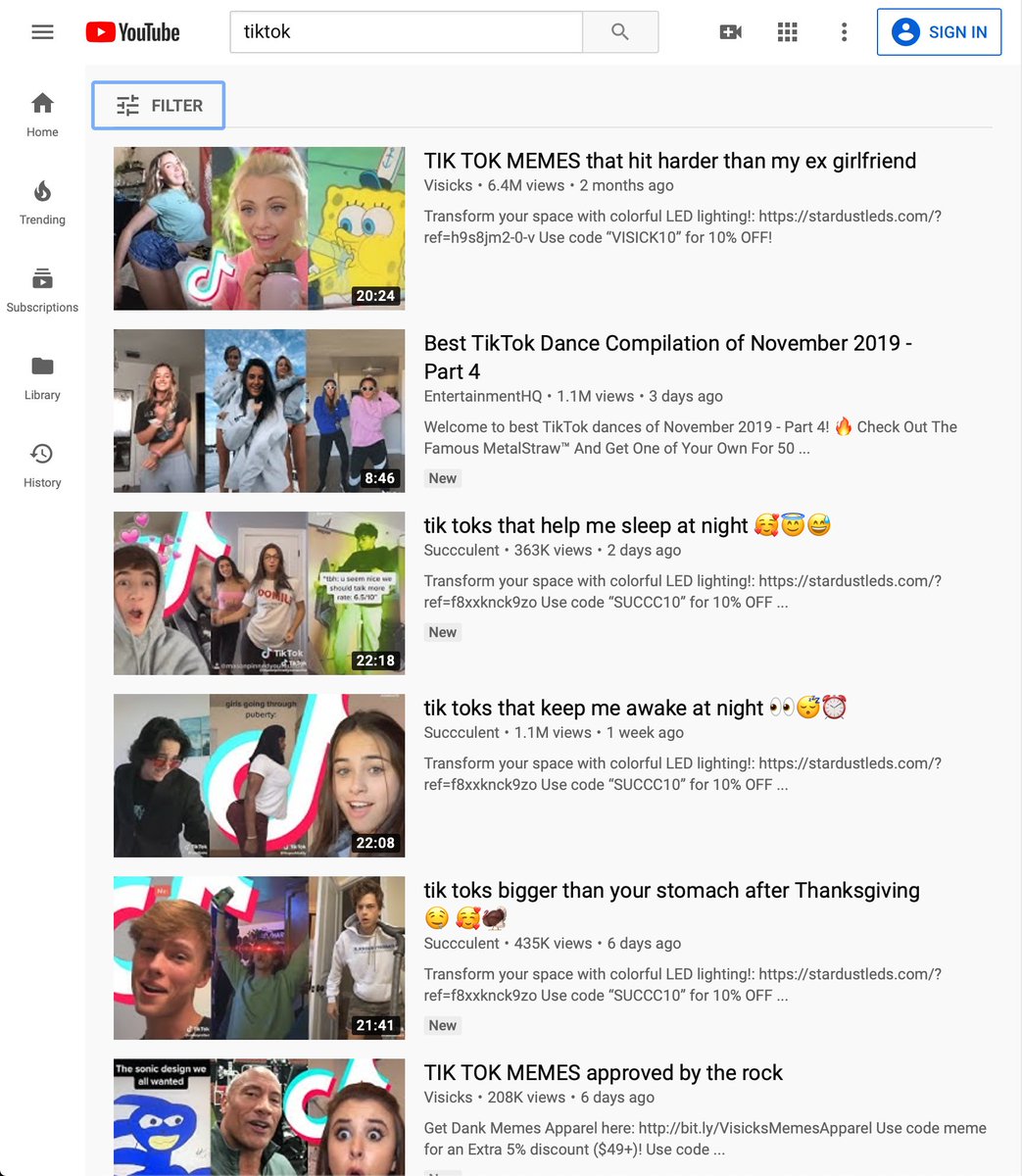 A lot of YouTubers & the media have now rightly criticized YouTube for how these steered algorithmic properties impact discussion and discourse. When the ads dried up, and the curse & keyword bots were deployed, there was a palpable shift in voices. These are real SM era problems

Playing it safe was in the DNA of Musically; the platform converged on the perfect common. When the audience was children, maybe Sartorius & Gray didn't matter. When Douyin's algorithms were injected into the rebrand, that's when the platform began over-weighting the 'exotic.'

I do not believe TikTok has a strong p2p product; I think the algorithm remains the dictator. Over some threshold, the humans review a loop and decide its future. Those humans are in China, and I think the shock content from earlier this year said more about them than the viewer.

For Musically, the content collapsed on the safe commons, the e-kids & their muser haircuts. An intangible dreamscape, forgotten as a distant fangirl memory through age. For some, the e-boy content became real, and really predatory, but the vast would simply grow up & unfollow.

TikTok brought with it this DNA, and the newly hired moderators in China too, seeking shock exotic content — against the creator's will — to justify SoftBank's steroid injections. The speed run was real, but it was also artificial & forced; the problems were ignored design flaws.

For this company, there were always two sides to the story. You should bet the truth was more sinister, like the humor of those picking and choosing the exotic winners — and those leaning towards the entertaining, disappearing the flaws, to keep the casino's lights on in Beijing.