THREAD. This is so important. Understanding why the FBI has Woods Procedures, and how it impacted 9/11, is critical — and should definitely be explained to FBI agents in their training. Here’s the deal:

2. Prior to 9/11, there were several instances where the FBI did not disclose material information to the FISA court. Specifically, that the target of a FISA was either the subject of a criminal investigation, or an informant. Here’s testimony from Mueller  https://fas.org/irp/agency/doj/fisa/fbi082903.pdf …

3. Why is this important? Because the standard for getting a FISA is lower than for getting a criminal surveillance warrant (Title III). It’s the compromise Congress reached in 1978 to balance the Executive’s ability to prevent threats to national security with civil liberties

4. The idea here is that there may be instances where the Executive Branch needs to *prevent* a crime or threat to nat sec before it occurs. Therefore, you don’t want to create a probable cause standard that forces the EB to wait until it’s already happened to take action

5. HOWEVER, you also don’t want the EB to end-run the 4th Amend., and surveil people on a lower PC standard, and then use what they have gathered to prosecute someone for a crime. This is, more or less, “The Wall” — what you get on the intel side your can’t share with crim

6. How does this play out in 9/11? Well, the FBI gets a tip that a sketchy rando (Zacharias Massaoui — 19th hijacker) is trying to take flight lessons but only wants to learn to take off but not land. Seems weird. Minneapolis wants to get a FISA

7. But, there’s no evidence that he’s an “agent of a foreign power.” He’s a French national — but he’s not connected to any international terrorist org. Not enough for FISA. AT THE SAME TIME, the Criminal Division doesn’t want to open a case. Why?

8. Because if they open a criminal case, and then the Nat. Sec. Division wants to get a FISA to see what he’s up to, they have to disclose the fact that there is an open criminal investigation on him. And FISA court, which has already been burned, will say take a hike.

9. Incidentally, this is what leads to Congress (read: Republicans) bringing down “The Wall.” They say, “Look, sometimes you need to get intel AND the person is committing a crime. So you can investigate both!” IG report refers to this 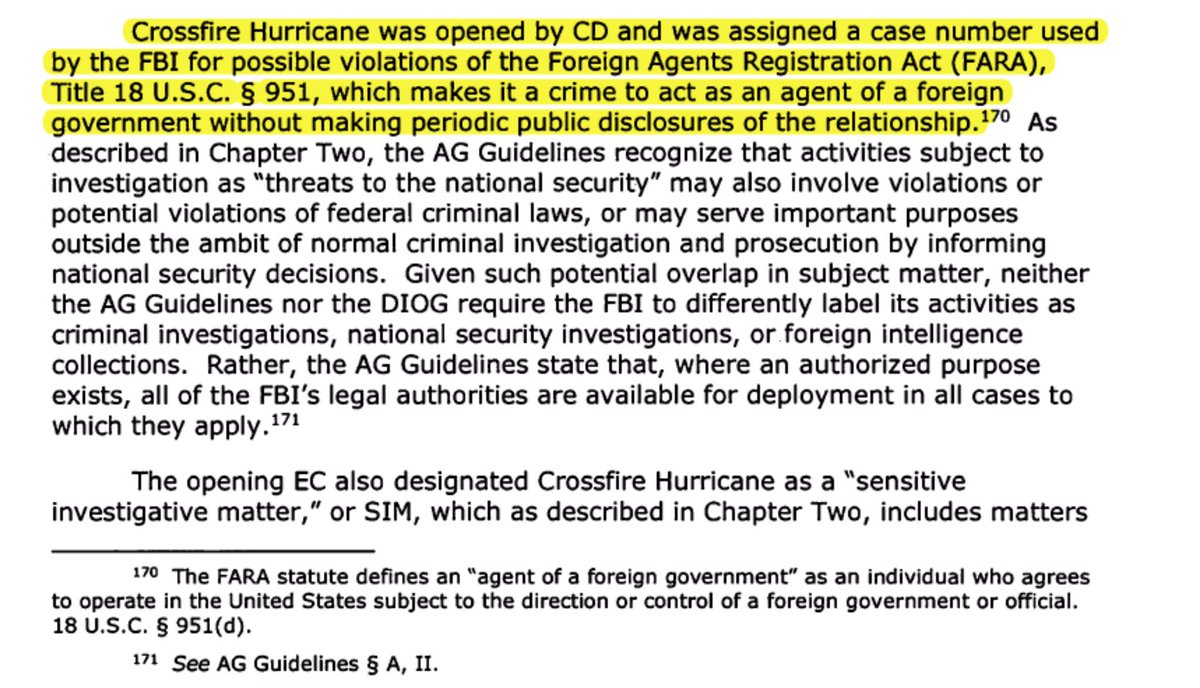 10. Anyway, the point here is that: 1) the standards have been *lowered,* intentionally, in the interests of national security; and 2) the FBI still has an obligation to inform the court of all relevant information precisely because it is ruling on a balancing act of interests

11. I think @AllThingsNatSec’s original point is that newer agents — who may only remotely remember 9/11 or understand why they have the authorities they do — may see the Woods Procedures as simply another bureaucratic hurdle. One that is subject to their *own* best judgment

12. FWIW, if you are running a FISA, there are SO MANY administrative requirements. Minimization. Audits by DOJ. Reports to the FISA Court. So 20 years later, losing sight of *why* they have to do “one more piece of paperwork” is understandable — but necessary to correct

NB: Congress also passed a “Lone Wolf provision” in FISA to address Massaoui situation, which allows a FISA for non-USPERS who may be negated in acts of terrorism. To my knowledge, never been used —

BUT, as I teach my students when we cover FISA, the issue is: You cannot (thankfully) make the criteria for getting one the basis of race, or religion, or political affiliation. So how do you create a standard that is not just reaction to the “most recent issue” but fair?

P.S. Forgot to add most important Tweet (implied and explained in Mueller link) — Woods Procedures were enacted *precisely* to avoid the disclosure failures that happened prior to 9/11 and resulted in much caution for FBI to take action...which is why IG Report so disappointing