Those numbers are a) massive and b) steady. Within an MOE that represents mere noise.

Since July, it’s shot up, including in @realDonaldTrump’s base.

What that means is that, since July, **support for impeachment has soared** and has remained steady at the high it reached in October. 54% to impeach and 50% to impeach and to remove.

In turn what that means is the @HouseIntel @RepAdamSchiff @RepSwalwell hearings moved the needle and it is likely that a couple of percent more will come from a Senate trial.

FIFTY PERCENT of Americans want Trump gone. That number has been steady for three months.

In case anybody doesn’t speak polling, that represents a landslide Dem win in 2020.

Some of those who don’t support impeachment at all (a steady 41%) will have that view because they think we should just vote Trump out. The same exact poll shows COLOSSAL numbers agreeing with @RepJerryNadler that Trump abused his power, etc 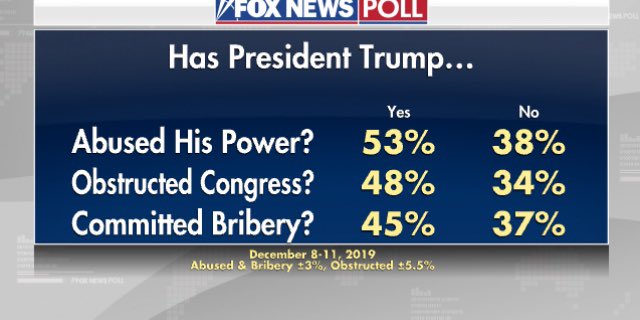 So, finally, what does that mean? It means that even a goodly chunk of the 41% against impeachment are completely unimpressed with Trump and will vote against him or stay home.

If @senatemajldr protects Trump he’s marching GOP Senators into the electoral abyss along with Donald.

PS: all numbers and screenshots in this thread were taken from the @foxnewsalert polling, one must always compare apples to apples with polls.  https://www.foxnews.com/politics/fox-news-poll-record-support-for-trump-impeachment.amp?__twitter_impression=true …