JK Rowling is lying. She is using her gigantic social media platform to obfuscate what the Forstater case was even about.

Let's be 100% clear about this, the case was an attempt to have "gender critical" beliefs (aka hatred of trans people) protected status under the law.

This was essentially an attempt at creating a UK version of US "religious freedom" laws. That's what this case ostensibly was; codifying in law that discrimination against or hatred of transgender people is legally protected.

And in case you worry I'm editorializing this in any way, she quite literally stated it was her intent to establish "gender critical" beliefs as a protected class.


This will be a test case to establish that "gender-critical" views are protected beliefs. 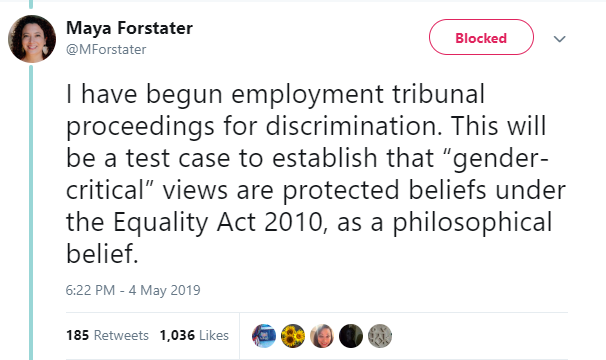 I'm sorry if I'm labouring the point a little here, but what JK Rowling is doing is essentially gaslighting the public as to the very nature of the case, which was to establish "gender critical" views are protected beliefs under the law, as was the stated intent of the claimant.

What's frustrating about this is that trans people do not have the media access and presence in public consciousness that the likes of Rowling or Glinner are privileged with, and as such are able to push such blatant obfuscation with impunity. Such is the power dynamics at play.

So even with the clear, stated intent of the very person who brought the suit in the first place being a test case to establish anti-trans hatred as protected under the law, we're going to have a lot of people who have been deliberately misinformed on these matters.

None of us have the voice and reach of someone like Rowling, so please push back against this if you can.

This was about further privileging the powerful to discriminate against a marginalised community, a total subversion of human rights, and would have far reaching consequences that could effectively gut equal rights law.