Tren Griffin+ Your Authors @trengriffin I work for Microsoft. Previously I was a partner at Eagle River, a private equity firm established by Craig McCaw. I am on the board of directors of Kymeta. Dec. 26, 2019 1 min read + Your Authors

1/ In 1999 my friends enjoyed calling my Porsche 911 black convertible Tren’s “Nasdaq 5000.” A venture capitalist I know had the same car on the same color and his partners called it "The Batmobile."  https://www.bloomberg.com/news/articles/2019-12-25/asia-stocks-to-open-flat-9-up-for-the-quarter-markets-wrap?srnd=premium … NASDAQ 9,000 would be the name today.

2/ If you did not learn from the Dot-Com phenomenon, you weren't paying attention. Good judgment comes from experience and often that experience comes from bad judgment. It is hard to convey to anyone not there at the time how strong "fear of missing out"
(FOMO) was at the time. 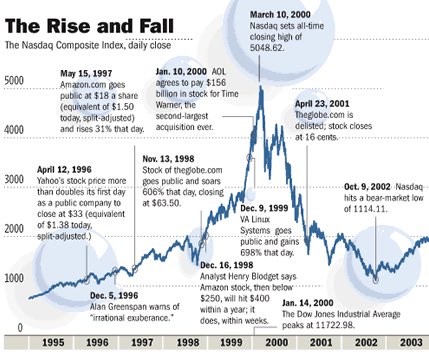 The killer in every case was that they ran out of cash. Businesses that had cash could potentially survive.

5/ 1996 had the most IPOs, but 1999 was the pivotal year in terms of valuations and amounts of money raised. That was the year some things about some stocks became batshit crazy.

Now doesn't feel much like 1999. But having cash and cash flow is still wise (margin of safety).

6/ Cash is a call option with no expiration date, an option on every asset class, with no strike price, that you can spend.

"Investors should keep a portion of their portfolio in Treasuries since they'll serve as 'airbags' should equities turn south." https://mobile.reuters.com/video/watch/treasuries-will-serve-as-airbags-wealth-id648392324?chan=9qsux198 …