People say I'm being divisive when I say that America was founded on racism and white supremacy. The reason for that is twofold:

2. MOST PEOPLE learned the white supremacist version of US history 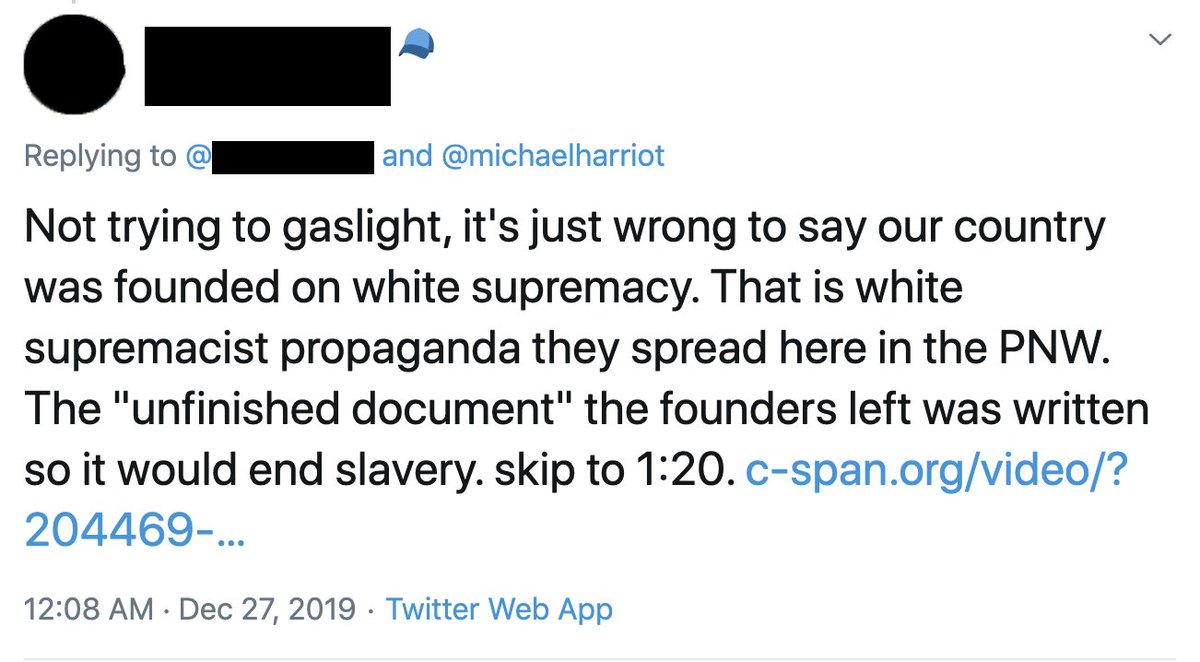 First, we must understand the meaning of white supremacy. Many people think of it as the ultimate racial slur.
It is not.
It is the idea that the white race is superior.

So what is racism?

racism is a belief or system based on the idea that race is a PRIMARY determinant of human characteristics. 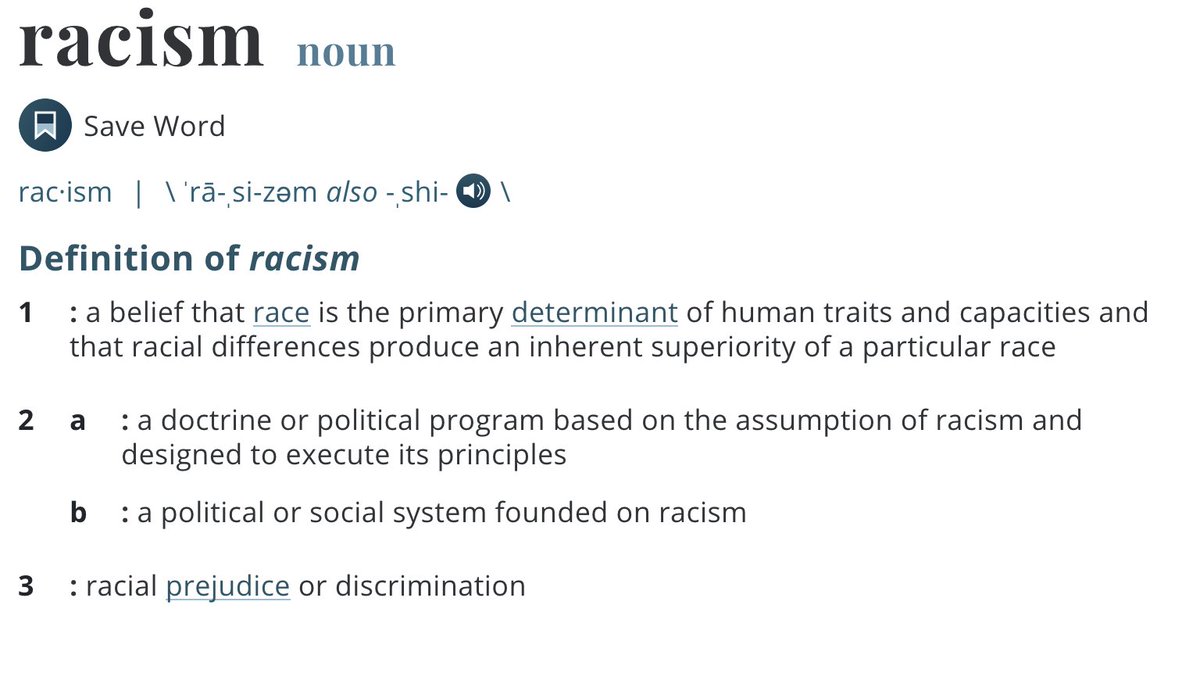 Here is an example:

The belief that Asians are better at math or that black people are faster are racist notions but not necessarily examples of white supremacy.

BUT America's system of chattel slavery fits the definition of white supremacy.

To be clear, buying, selling or owning a human being requires inherent superiority because it is impossible to own an "equal."

An owner, by definition, is not equal to his property

Racism and white supremacy are no more insulting than "liberty" or "justice." They are nouns whose connotations to which we ascribe. Yet, we readily use latter to describe our nation, even though white, male landowners are the only Americans who have ever had liberty or justice

But was America founded on principles of racism and white supremacy?

Let's look objectively at the facts using the method of the historian & wordsmith Russell T. Jones, also known as Ol' Dirty Bastard, who once opined that he and his cohort "go back like babies and pacifiers"

The 1606 Virginia Charter explicitly stated that the colonists’ goal was “propagating of Christian religion to suche people as yet live in darkenesse and ... to bring the infidels and salvages living in those parts to humane civilitie and to a setled and quiet govermente.”

Ooh baby, they liked it raw.

I'd need to see the notarized contracts to be sure. It's true that there were already European indentured servants in the U.S. but they weren't treated like the black servants. How do I know?

In 1640, John Punch, an African servant, escaped from a plantation. But he wasn't alone

Now, this was before Harriet Tubman Freed a thousand slaves (because she didn't. The real number was about 60 or 70). Anyway, John Punch escaped with 2 white dudes named Greg and Victor.

When they were caught they had to go to court for sentencing.

Unfortunately, they didn't get to go before Judge Joe Brown. So the Virginia High Council sentenced them all to 30 lashes. Greg and Victor's period of involuntary servitude were extended by one year.

"...and that the third being a negro named John Punch shall serve his said master or his assigns for the time of his natural Life here or elsewhere."

Same crime, different sentence.
The only explanation is white supremacy.

To be fair, maybe it was the judge who was a white supremacist.

Well, in 1641, Mass. passed the first real white supremacist law when it legalized slavery...but only for non-white, non-Christian—people who the book of Leviticus defined as "strangers".

"There shall never be any bond slaverie, villinage or captivitie amongst us unless it be lawfull captives taken in just warres, and such strangers as willingly selle themselves or are sold to us,” the statute says.

In 1662, the Virginia assembly decided that any child born to a woman slave was automatically a slave FOR LIFE.

But, one can argue, that this predates the Founding Fathers and the REAL America. How dare I call the Founding fathers "white supremacists!"

"... in memory they are equal to whites; in reason, inferior.”

He also said: “I advance it therefore, as a suspicion only, that the blacks, whether originally a distinct race, or made distinct by time and circumstances, are inferior to the whites in the endowments of both body and the mind.”

Federalist Paper number 54 is basically a debate on the value of black life and how they will be legally represented in the Constitution. It concludes that the slave's "true character" is a mixture of human being AND property.

And while people point to the 3/5ths Compromise, they rarely mention Article 1 section nine, which sanctions the slave trade until at least 1808 and allows states to tax imported human beings

Remember, racism is "a doctrine or political system" based on race

Of course, there are scholars who will present two arguments in defense of the Founders and white men
1. The founders accepted slavery for expedience's sake and for the Union.

First of all, remember the phrase "white supremacy" is not an aspersion. It just is. The only way one can decide the value of black life, legally or theoretically, and enshrine it into the constitution is to believe you have the authority to make that decision for an entire race.

Secondly, "That's just how it was back then" is just something white people say to justify evil

The abolitionist movement predates America and even the founders who owned slaves KNEW it was wrong. Jefferson called slavery a "moral depravity and a "hideous blot."

MANY of the founders felt this way.

James Madison, the "Father of the Constitution" thought it was wrong to admit in the constitution the idea that there could be property in men. That's why the Constitution refers to the slave trade as "the migration or importation of such persons"

Every historian will tell you that George Washington owned 300-plus slaves. And when one of his slaves, Oney Judge, escaped, Washington chased her until the day he died.

They were all against slaves because they were aware that it was wrong.

But they put the wishes of southern plantation owners above the ideas of freedom and liberty...

But only for black people.

Now, we keep talking about slavery but we haven't mentioned free black people yet.

NY is the only state in America where free blacks had the same voting rights as white men (still had to be property owners, though)

NJ and Pennsylvania rescinded the right of free blacks to vote after America became a certified country.

Of black people, it said:"They are not included, and were not intended to be included, under the word "citizens" in the Constitution, and can therefore claim none of the rights and privileges which that instrument provides for and secures to citizens of the United States.

"On the contrary, they were at that time considered as a subordinate and inferior class of beings who had been subjugated by the dominant race, and, whether emancipated or not, yet remained subject to their authority."

There is absolutely no question that the country was founded on white supremacy and racism.

Now, only one question remains:

Again, I want to remind you that this has nothing to do with hate, intent or how white people FEEL. I am saying this without judgement, I am just gonna share some facts:

On average, a home in a black neighborhood is valued at $48,000 less than an identical home in a white neighborhood, even if the two neighborhoods have the same crime rate, resources, amenities, etc.

Home values are dictated by the demand of the market. White people don't buy homes near black people so there is less demand for homes in black neighborhoods.

But again, it does not matter why.

That research was from the Brookings Institute.

School funding is based primarily on property taxes. Because white homes are more valuable simply because they are surrounded by white people, schools in majority-white school districts receive more funding that nonwhite districts

According to Edbuild, a predominately white school gets $2,226 more per student than majority-minority schools.

Again, this has nothing to do with REAL WEALTH or income.

BuT iF BlaCK peOpLe CoNcenTrAtED oN HaRD WoRk...

Well, according to a numerous studies including the Equality of Opportunity Project and a new one by Harvard's @christinajcross that parental income, a two-parent home and even living in a good neighborhood don't explain gaps in educational outcome and achievement for black kids

A black kid whose parents are in the top 5 percent of earners, who lives in a great neighborhood will earn about as much money and has roughly the same likelihood of ending up in poverty as a poor white kid living in a poor neighborhood.

A black person who commits a crime is sentenced, on average, to a 20 percent longer prison sentence than a white man who commits the same crime and has a similar criminal record according to the U.S Sentencing Commission.

According to the Economic Policy institute, the pay gap between college-educated black workers and college educate white people is LARGER than it is for non-college graduates. The same is true when experience is factored in.

AND they use seasoning salt.

Even in the same county, voters in a hypothetical all-black precinct would wait 15% longer than voters in an all-white precinct

Now none of this has anything to do with hate or intent. It just is.

Hard work, education and morals are important (even though the slave-owning, founders didn't seem to have them, those lazy bastards)

But only if you're not white.

There is absolutely no evidence that hard work, education or values will erase the racial wealth gap, the employment disparities or criminal justice problems.

I know it sounds like I'm beating a dead horse or "playing the victim," but there isn't a single white person on the face of the earth that can prove that inequality is due to anything other than white supremacy.

It has always been that way and it still is

1.A black man is the only president in the last 40 years who didn't have someone in his administration convicted of a felony.

Donald Trump, the dumbest, most immoral white man has the same job as him.

This whole thing started because I read an article about Chuck Todd, who hosts the most important political show in America. It shapes our political narrative. He recently said that he was "naive" about Republican misinformation

Now, I watch Meet the Press.

And I noticed that the guests are always regular, schmegular white people and the most brilliant black people you can find.

Seriously. Chuck Todd is a college dropout. Look it up.

So I decided to go back an entire year, and look up the education of every person on Meet the Press, even the politicians. Some never went to college. Some had bachelors degrees.

But for an ENTIRE YEAR, EVERY SINGLE BLACK PERSON on MTP had a Masters degree or a PhD except 1

And that, dear friends, is white supremacy