When you tweet something to 65 million people to intimidate a federal witness—something you've done many times before—then leave it up for well over a day, just because a New Hampshire professor calls you out and gets 25,000+ retweets doing so doesn't mean you get a take-backsies

PS/ I normally would *never* attribute to this feed the sort of reach and influence I just did, but when I tweeted the "breaking news" that Trump had tried to out the whistleblower I checked Twitter, first: there were *no news stories* on this, and almost no one talking about it.

PS2/ When my tweet alerting Twitter users to what Trump did reached 20,000+ retweets, many people started contacting me saying they hadn't seen the news anywhere but in my tweet—as media had ignored it. Now Trump has—on Twitter—sought to delete his tweet.

It's not a coincidence.

PS3/ The Washington Post botched the timeline of Trump's actions.

In between Friday and Saturday, no news outlets were reporting on what happened.

PS4/ I only mention this because this is a story about the power of social media that the Washington Post is burying. To be clear, it's *not* a story about me—I only wrote about what Trump did because *someone alerted me to it*, i.e., like the media I personally had *missed* it.

PS5/ That @realDonaldTrump *broke the law*—by illegally deleting a tweet from a presidential account—because he had been caught out by a New Hampshire professor on Twitter underscores how unstable he is. He's acting without thinking *whatsoever*—something a POTUS must *never* do.

SOURCE/ Here's my tweet about this news, which tweet came (sadly) a full 18 hours after Trump's retweet of the Washington Examiner article with the alleged name of the whistleblower in its headline. That places Trump's tweet on December 26—not December 27.

NOTE/ Had the Post/others gotten their dates right—and given readers an indication of what intervening event on Twitter may have caused the deletion—they would've had a better story. My thread accused Trump of a crime— which suggests he deleted his tweet aware of that accusation.

NOTE2/ I just realized I have some info my readers don't, which may make this thread make a *lot* more sense: because I run this feed and can see its followers, I know *many* Trump officials follow this feed, including most notably top presidential media adviser @KellyannePolls.

PHOTO/ (The reason she comes up as "Untrustworthy" as well as a follower of my feed is that I use @BotSentinel on my browser.) 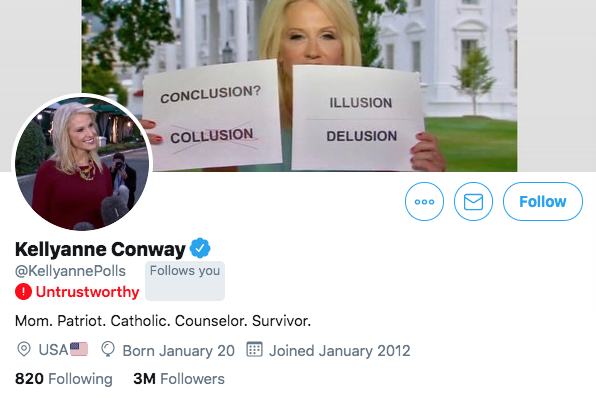