A thread about the four times I met John Lewis:

First of all, I stan John Lewis and Muhammad Ali probably more than any men who ever lived.

Seriously, I could talk all day about those two, and I actually have.

Now most people think of the Civil Rights movement as happening a LONG time ago but John Lewis showed me how recent it all was.

We can’t forget how long he’s been fighting this fight.

Lewis was already an OG in the Civil Rights game when he became one of the ORIGINAL Freedom Riders. He met Rosa Parks when he was 17. MLK came to meet LEWIS when Lewis was 18.

By the time he was 20, he had been beaten by white mobs, set on fire and arrested. And when CORE ended the Freedom Rides because it was too dangerous, he was like:

He was LITERALLY the first “Ride or Die” homey.

By the time he was 23, JL was the leader of SNCC, one of the groups that planned the March on Washington.

Because it had been whitewashed, nowadays we look at the movement for nonviolent resisting in the wrong way.

For instance, more nonviolent civil rights activists were killed between 1954 and 1965 than any other movement, including the anti-war movement, Black Panther Party and the movement to make America great for the first time

People who call it “nonviolent” forget one thing:

The first time I met John Lewis was in 2015 for the 50th anniversary of the Selma to Montgomery march, commonly called “Bloody Sunday”

EVERYONE was there to commemorate the historic event. He introduced me to this lady named Amelia Boynton

If you’ve ever talked to John Lewis about Civil Rights, he’s always intentional about pointing out the importance of black women in the movement and how they are forgotten.

Boynton is one of those women few people outside of Ala. know about.

First of all, Amelia Boynton was smart AF. And she wasn’t scared of anything.

She somehow passed Alababa’s trick-filled “literacy test” that ONLY black people were required to take to get their right to vote.

Once she passed it and got the right to vote, she started traveling around teaching other black people how to pass the test.

There’s a good reason that this story isn’t part of the Civil Rights movement narrative.

Most people regard the Civil Rights movement as the eve vents from 1954 through the 1960s.

Amelia Boynton was doing this in NINETEEN THIRTY SIX!

Anyway, I talked to Lewis and Boynton about everything from Civil Rights to poetry.

A lot of people saw the news stories about Lewis, Obama and others at the 50th anniversary of Bloody Sunday but most people don’t know this:

Not only does he make that trip, but he brings busloads of politicians, reporters etc to Ala. to commemorate the march.

Well this year, his foundation asked me to write a poem for the dinner honoring him.

I worked a long time on that poem.

So I finish the poem but Lewis doesn’t really want it. It’s not that he didn’t like it, but he wanted me to write something that honored the WOMEN of the movement.

So I had to start all over. I literally finished it 10 minutes before the dinner.

Lewis had just organized a sit in on the floor of the House to protest gun control. He hadn’t stopped after all these years.

I told him that he missed out on a great poem about himself and he laughed. 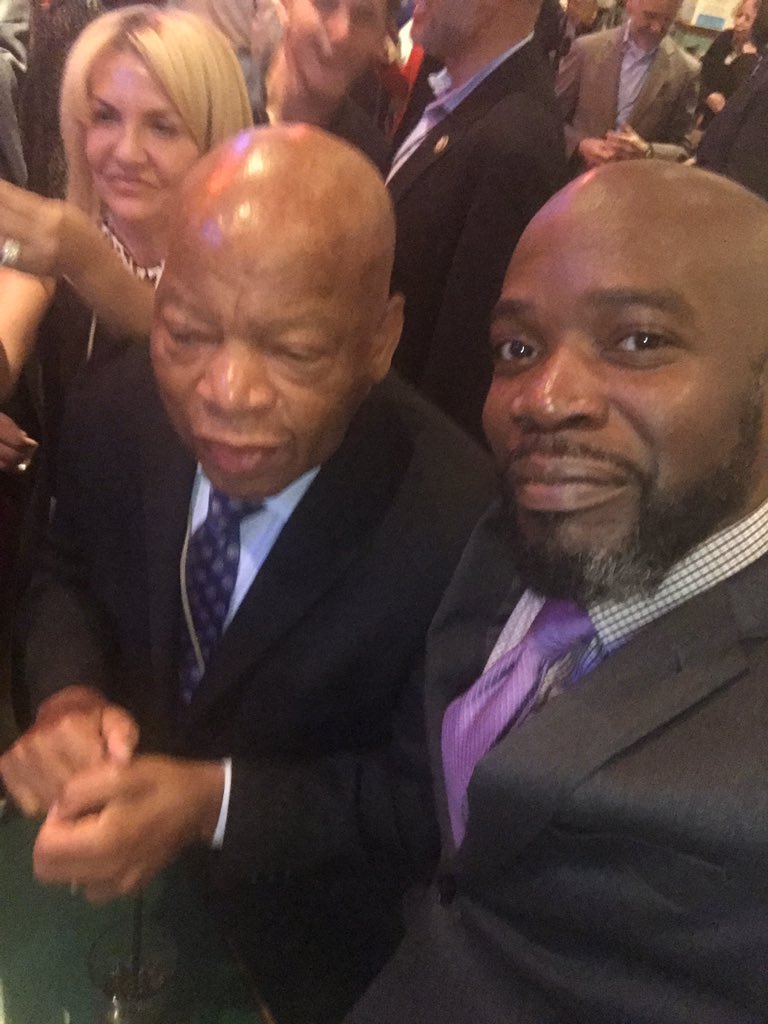 I’m 2018, I ran into John Lewis in in Memphis. He had just finished speaking at an event for the 50th Anniversary of MLK’s assassination.  https://www.c-span.org/video/?c4728520/user-clip-mlk50-evening-storytelling-rep-john-lewis-rev-james-lawson-tamron-hall …

Anyway, after the event, I was in a HUGE elevator and he was with his security team. ALL the black people were there, and he turned to me and asked

“Young man, whatever happened to that poem.”

I was kinda shook that he remembered.

The FOURTH time I met John Lewis was in Atlanta. I was covering the irregularities in the 2018 midterms.

“There are forces in our region trying to take us back to another time and another period,” Lewis said. “And you are bearing witness. But we must not go back.”

Of course, there are people who talk about slavery and Jim Crow as if they happened so long ago.

We even do it.

There are 2 iconic pictures of that day. The first is the one of a State Trooper literally fracturing John Lewis’ skull. 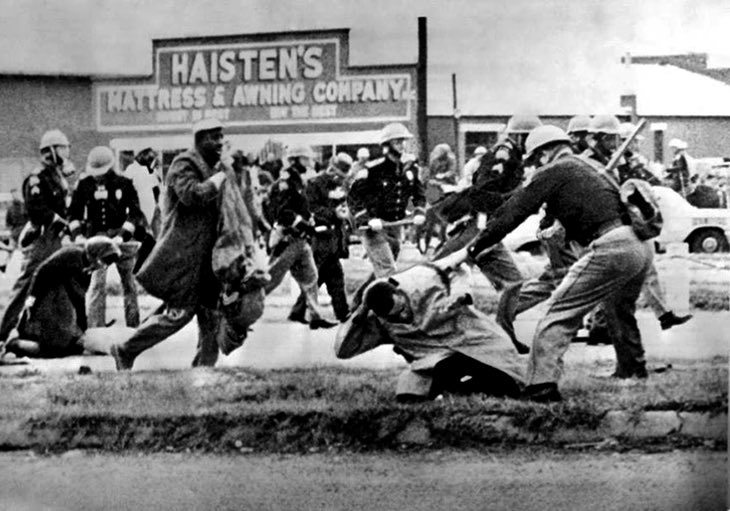 But the second one is of a black woman who was beaten, clubbed and gassed that day.

Her name was Amelia Boynton 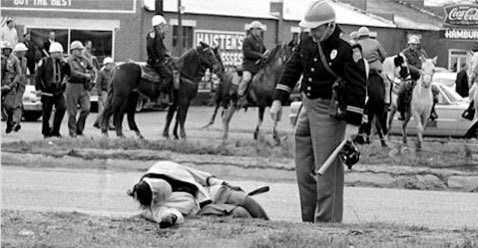 When people talk about Bloody Sunday, they mention MLK, they might mention John Lewis but they RARELY mention Boynton.

But John Lewis makes sure no one ever forgets.

We think of Lewis as passive and forget the resistance, but we forget that he was really a radical.

In fact, when the Civil Rights Act was first written he criticized it at the March on Washington.

We forget that SNCC was THE protest organization at that time and he was leading it. When LBJ wanted protests to stop, he invited MLK and others to the White House but didn’t invite Lewis because he knew SNCC wouldn’t go along.

But it’s because Amelia Boynton had been trying to register voters and finally said: I know who can help:

They met at HER HOUSE to plan Bloody Sunday

She was invited to Obama’s 2015 State of the Union.

Now imagine going from being beaten on a Selma bridge to seeing a black president.

But here is something more interesting than that.

A few weeks after the last time I ran into John Lewis, American history was drastically changed forever.

In 1860, 52 years after the slave trade was outlawed, some rich white men in Alabama made a bet that they could sneak a ship full of enslaved Africans into “the land of the free.”

They brought 109 Africans back on the ship Clotilda.

For years, historians thought that the last survivor of the Transatlantic slave trade was a man who came on this trip named “Cudjo”

When I met Amelia Boynton, John Lewis said she had “even registered those who came to America on slave ships.”

This was weird to me but I didn’t think anything of it.

So I’m April if 2019, a few weeks after that hearing in Georgia, a British researcher published a paper about Redoshi.

It turns out that Redoshi was on the Clotilda too. And she lived longer than Cudjo.

It’s understandable how this was unknown, because Cudjo was well known. Zora Neale Hurston wrote a book about him—Barracoon

But I’m 1936, When Amelia Boynton began registering voters, she met a woman named Sally Smith who told people she came here on a slave ship.

Boynton brought an African who spoke Bantu to meet she told Boynton about Her journey. Boynton even wrote about it in her book.

Well, it turns out, that woman wasn’t misremembering.

Years later, we would discover that “Aunt Sally” was Redoshi the last survivor of the Transatlantic slave trade.

I think about that all the time. I talked to John Lewis and Amelia Boynton the same way they talked to slaves. 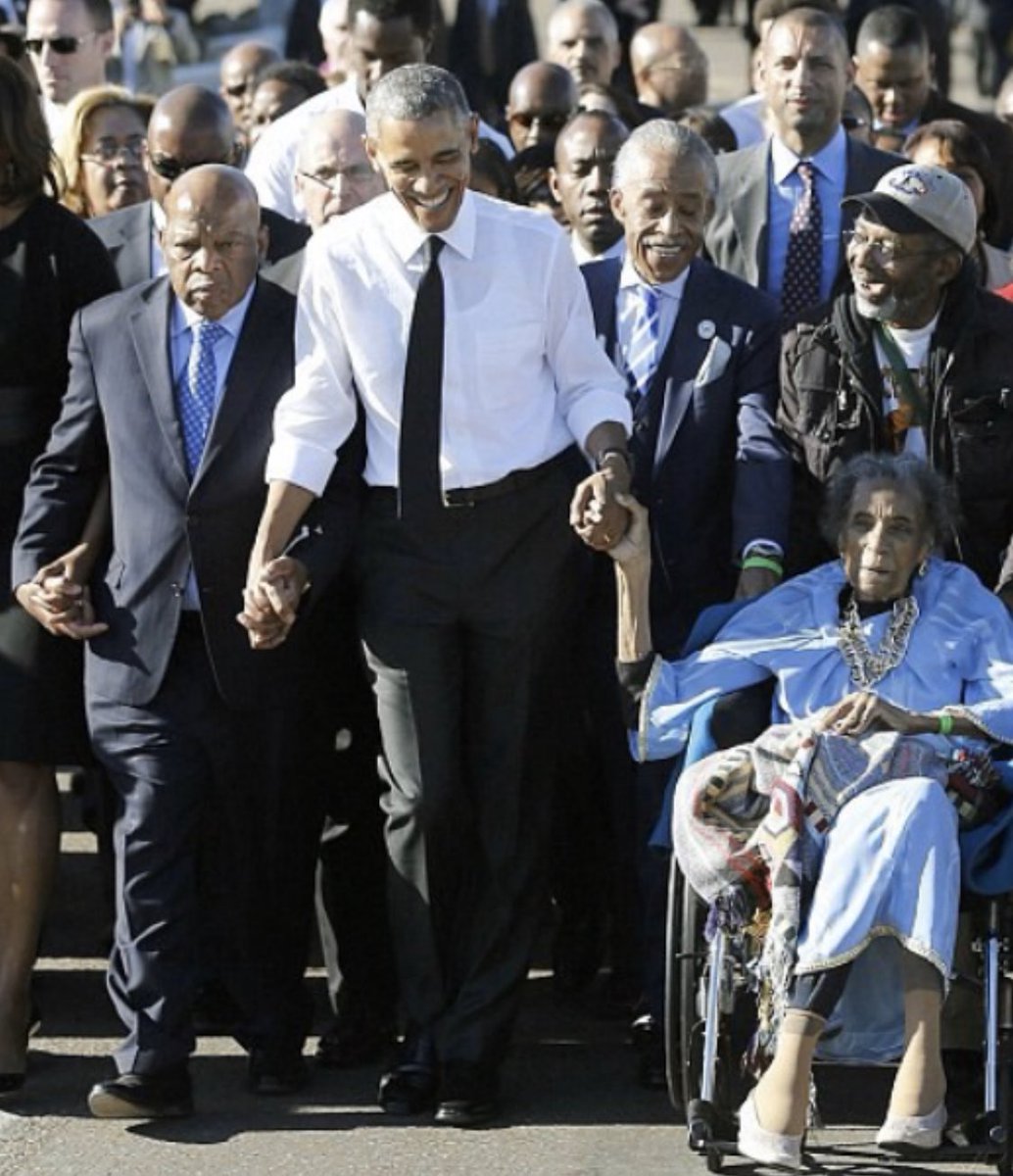 Part of what they talked about at that Feb. hearing was an article I wrote about thousands of votes in Georgia disappearing in the 2018 midterm elections.

I sent that to article to his office. After that hearing, I spoke to him again briefly and told him I was the one who wrote the article.
Of course I didn’t expect any recognition or kudos but this man was a living legend! He was surrounded by people who wanted to take photos, etc

He just said: “Thank you for bearing witness, young man.”

And just as I walked away, he said:
“But did you send the poem, though?”

John Lewis and Amelia Boynton have been fighting all of their lives, they have passed on their legacy and values to us.

But here’s the most interesting question of all:

What do you think happened to to the legacy and values of the white people they were fighting?

Found it (Side note: I can't believe there was a period it my life when I used Pages as my main word processor)

"The Man Mho Made the Sword" 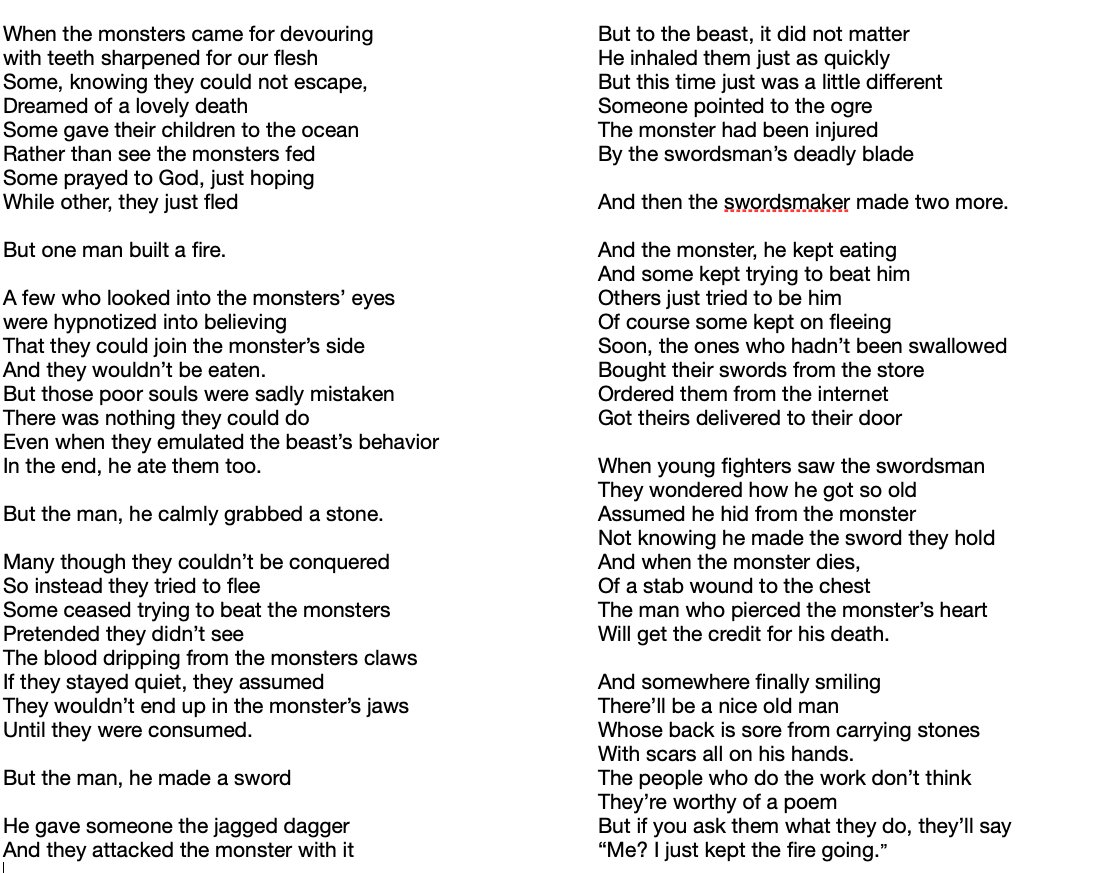 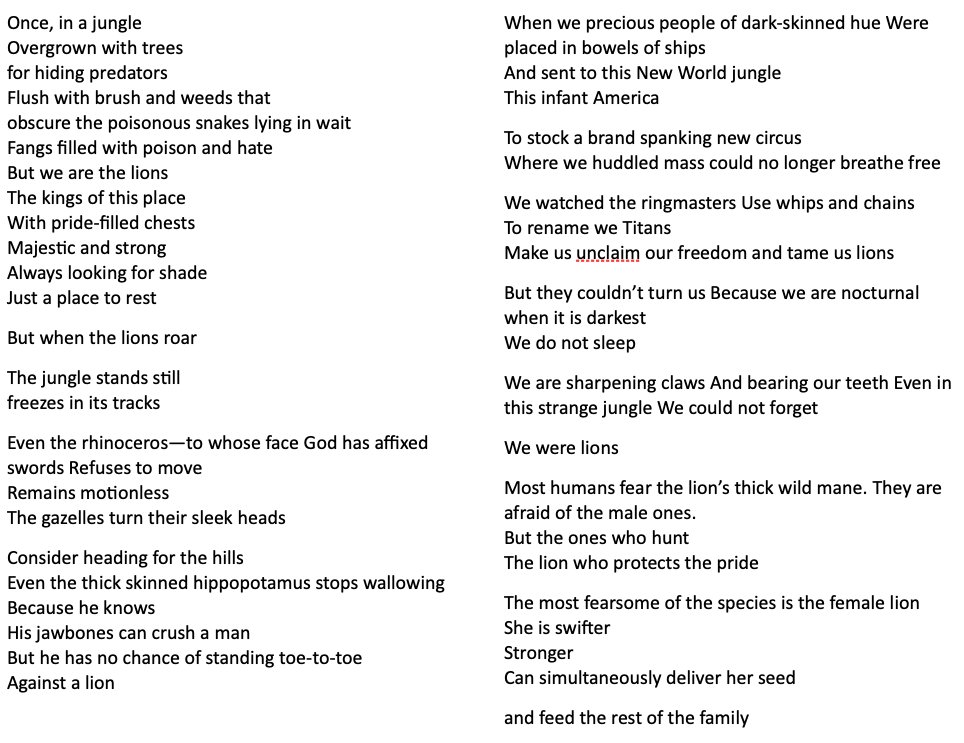 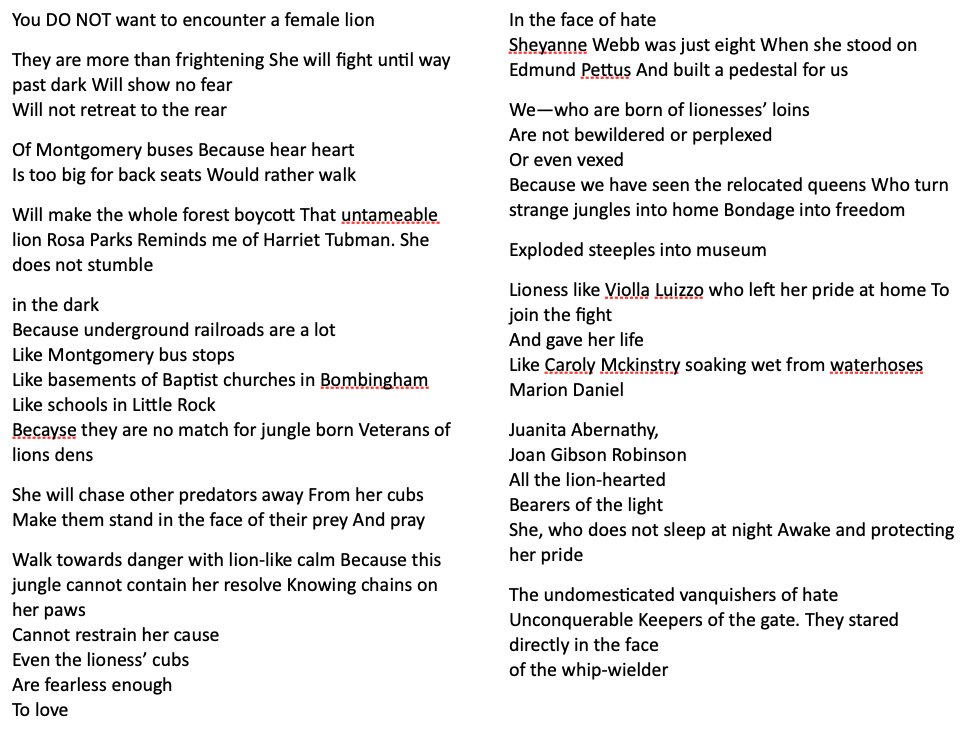 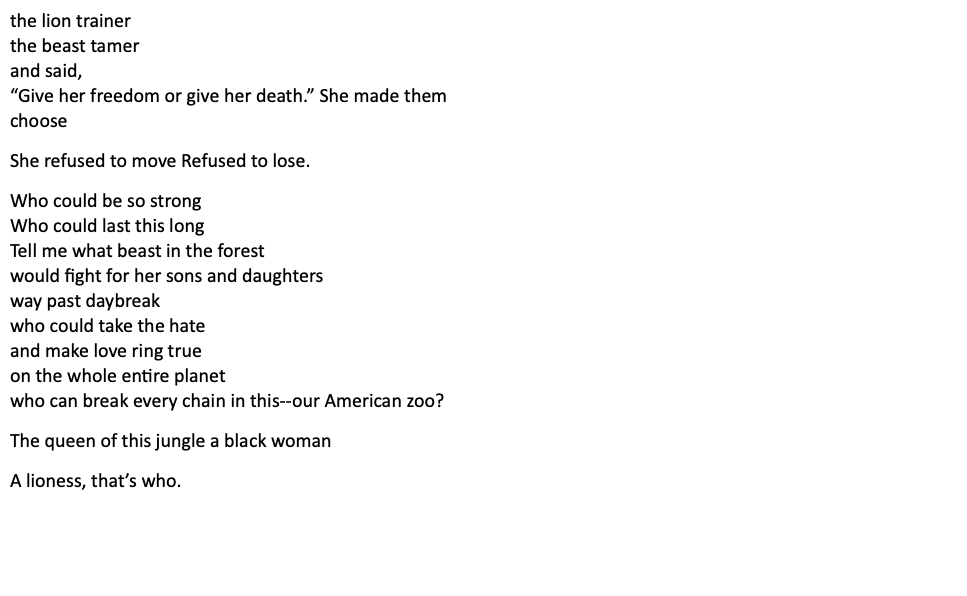