I agree and disagree with Dale.

I haven't yet seen anyone say we *know* what Trump's tweet was about, though many note it implies an *offensive* force projection, rather than the purely protective mission Dale is refering to. How is providing security for an embassy "whoop-ass"?

Mind you, @ddale8 *could* be correct that Eric Trump was erroneously referring to a security detail as opening a can of whoop-ass. Just so, the language of the tweet and the fact it was hurriedly axed *could* suggest it referred to an *offensive* operation, like an assassination.

What I disagree with is Dale implying that we *know* which of these two possibilities is true, or even which is more plausible. I'd argue that the language of the tweet and its sudden deletion suggests what Dale calls a "conspiracy" is actually the more plausible of two options.

Having said that, anyone saying "we know for sure" what Eric was referring to is wrong, so I certainly hope nothing I wrote implied I thought we *knew for sure* what Eric meant by "whoop-ass" and a sudden tweet deletion. But improper foreknowledge is at least a *likely* scenario.

PS/ I certainly *do* agree that Eric was replying to a security detail tweet. But I *also* know that major media has repeatedly reported that Eric is much more trusted within his dad's operation than most Americans know. So him having improper foreknowledge is all too plausible.

PS2/ One way to look at it is this: if *Eric Trump* thought his tweet was *clearly* referring to a new security deployment, he wouldn't have deleted it. So it would seem that at a minimum he himself acknowledges that his tweet looked like he had foreknowledge of an assassination.

PS3/ Jane wisely notes that Polititweet cut off the tweet that Eric Trump wrote, which is why I and millions of others on Twitter did not see the tweet Eric was replying to (I, like many, have Prosobiec blocked because he's a purveyor of lurid propaganda).

PS4/ FYI, here is a picture of the Polititweet archive I and millions of Americans saw: 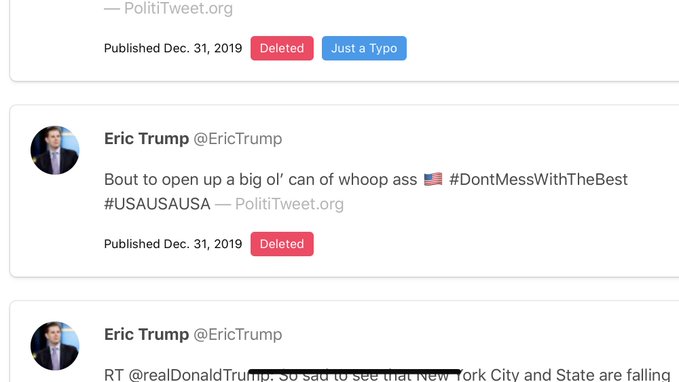