michaelharriot @michaelharriot Sr. Writer at theroot.com/, board-certified Wypipologist, master race-baiter. His pen is mightier than your sword. Warning: Has been known to “Jeer at whites.” Jan. 08, 2020 6 min read

When @realDonaldTrump says "Make America Great Again" a lot of people wonder what he's talking about. But using my detective skills and looking through history, I believe I've finally narrowed down the exact day Donald Trump thinks America was "great."

If America was ever great, it would have to be sometime between 1776 (when America was founded) and 2015, when he first started using the phrase. I know that seems like a large span of time, but you always have to start at the beginning.

From there, I had to use deductive reasoning to figure out a few things. It seems reasonable to assume that there is NO WAY America could ever be great if there were no Trump's here. So I looked up when Trump's family first arrived in the U.S.

Well it turns out that Freidrich Drumpf came to America in 1885 at the age of 16. Alone. Because he had not completed his mandatory military duty, he was not supposed to leave the country.

And when he was finally naturalized, his naturalization form says he arrived in 1883. 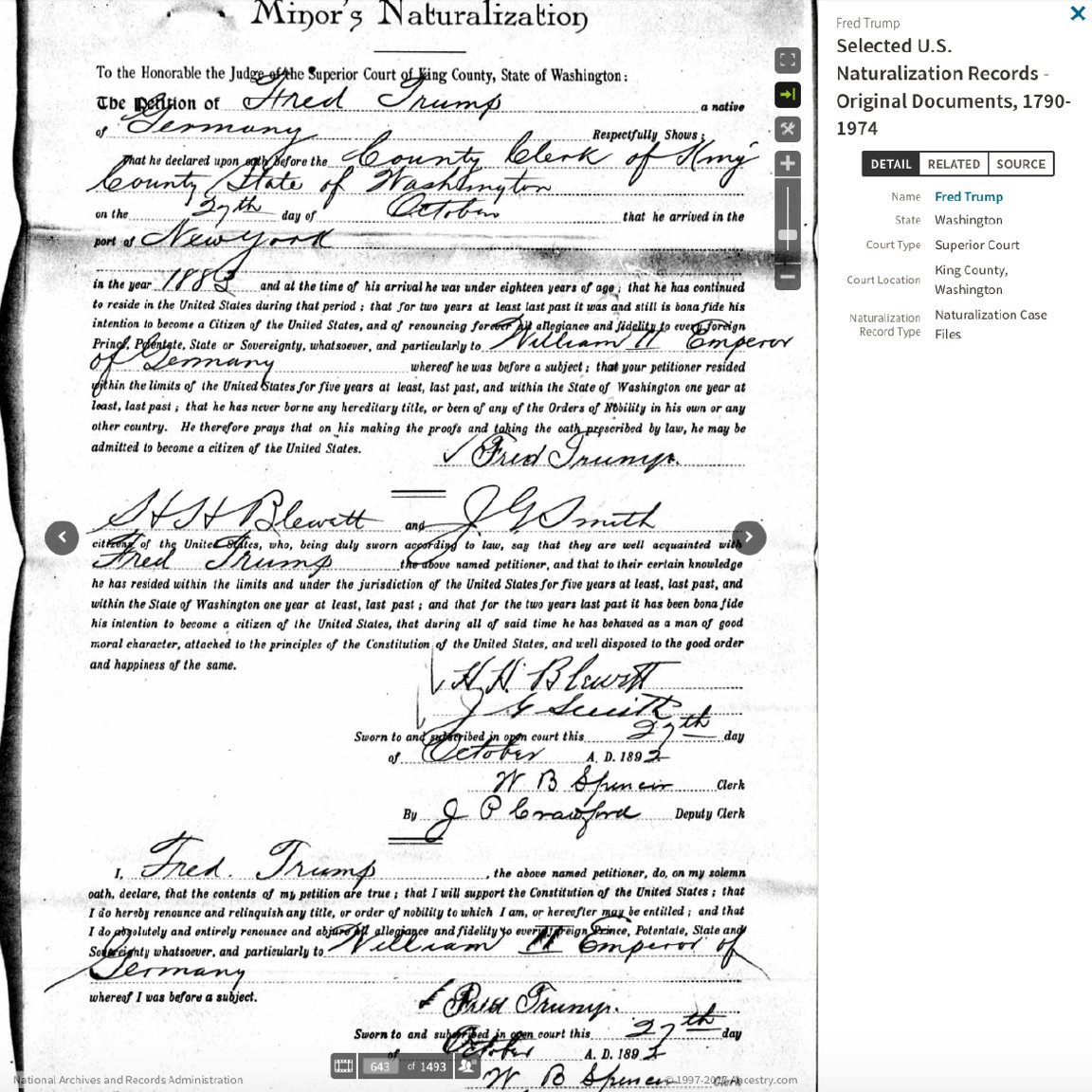 That's right, Donald Trump's grandfather was an unaccompanied minor who came into the country illegally.

Not only that, but Friedrich BEGGED his native Bavaria not to deport him.

Anyway... Now we know that it was sometime after 1885 when America was great.

But wait...Grandaddy Trump LEFT America and returned to Bavaria, which is now Germany

Until he was KICKED OUT OF THE COUNTRY by Royal Decree in 1905 and moved to NY. He started getting rich but had to lay low because he didn't want people to know he was German.

So America COULDN'T have been great during a time when he couldn't flaunt his money.

Trump's father was born in 1905, meaning he came of age when America was just starting to get great.

I thought America might have been great in 1919, when the Red Summer of 1919 saw white lynch mobs attack people in cities across the U.S. But that wasn't it.

Then I thought it might be the 1920's when the KKK reemerged and put "America First" Maybe that was it! 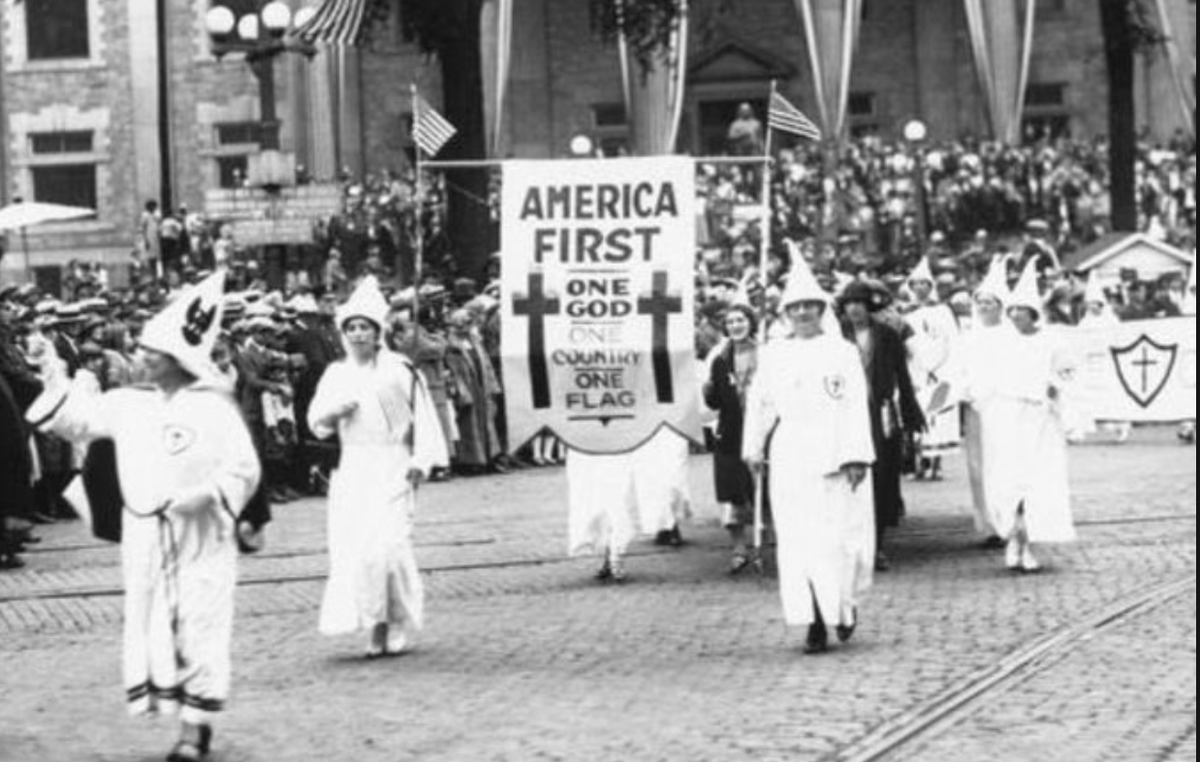 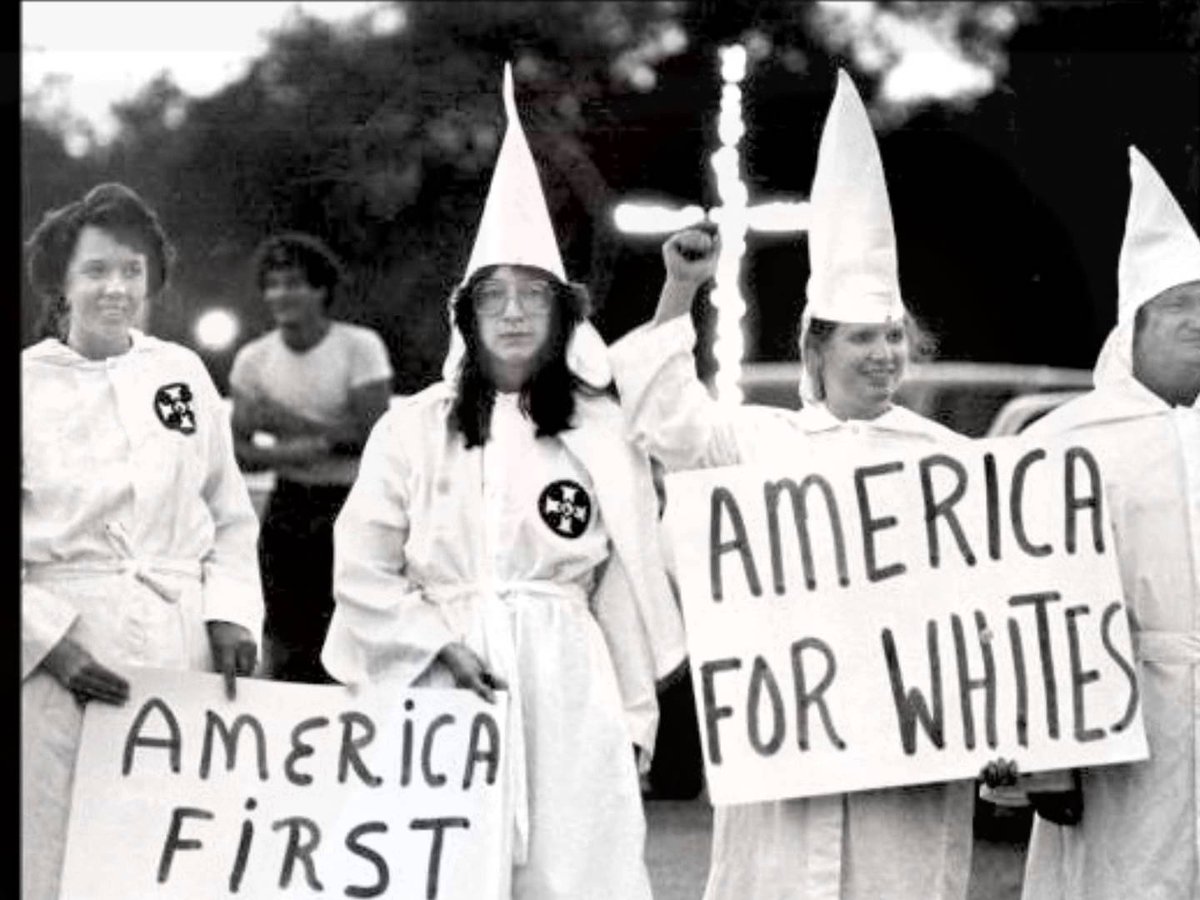 After all, 1921 is when a Klansmen explained to Congress that the KKK always puts "America First"

But the Presidents were Woodrow Wilson, Warren Harding and Calvin Coolidge.

You can't be great with a muhfucka named Woodrow or Calvin running the show. That's just science.

And here's how I know America wasn't great then.

On Memorial Day in 1927, Fred Trump was arrested at a Klan rally. Logic dictates that America wasn't quite great enough if Trump's father had to go out and protest.

Then I realized: Trump is an egomaniac.

America couldn't be great until after he was born!

In 1948, Strom Thurmond got so mad at the prospect of desegregation that he started the Dixiecrat party. That was the turning point for the "Solid South"

Then it hit me!

The year Donald Trump thought America was great HAD to be during a post-1948 Republican presidency.

Now it couldn't have been during any of the Bushes presidency, because they HATED Trump.

Now it couldn't have been Reagan because he offered amnesty to undocumented immigrants. Plus there was a major recession under Reagan.

Ford and Nixon presided over the Vietnam war, which gave Trump a sudden outbreak of bone spurs, forcing him to get FIVE draft deferments.

Otherwise, he would have fought for his almost great country. Amazingly Trump's bone spurs quickly healed after we withdrew from Vietnam!

So through a process of elimination, I found the date.

But first I need to tell you about Harlon Carter.

Harlon Carter was just like Trump. He didn't like Mexicans. He thought he was a badass. He lied his ass off.

When he was 16 years old, he was living in Texas when someone stole his parents car. Harlon, being a racist, natually assumed that a Mexican did it. His parents didn't know yet, so Harlon picked up a shotgun and went hunting Mexicans.

He found some Mexican Americans swimming at a local pond and, with no knowledge or evidence, demanded that they come with him. One of the boys, Ramón Casiano told him: “Hell, no, we won’t go to your house and you can’t make us.’’

Ramón laughed, backed up and knocked the gun away.

Harlon raised the shotgun, pointed it point-blank at Ramon and fired, killing him.

Harlon Carter was convicted and sentenced to three years in jail. He had only served two when his conviction was overturned because the lawyers supposedly gave wrong instructions to the jury.

All of this happened in 1931. Part of the reason he got such a light sentence was because segregation and Jim Crow was still alive.

America was GREAT AF back then.

Harlon went on to become a lawyer and kept on loving guns and hating Mexicans.

Luckily, Harlon's father got him a job where he could put his passions to good use. He quickly rose through the ranks (with daddy's help, of course) and ended up being in charge of the entire organization:

The United State's Border Patrol.
(Don't worry. It will all make sense)

When Eisenhower took office, Harlon presented him with an idea of how he could make America Great Again.

Harlon got Eisenhower to put a top Army general on this pet project.

The border patrol carried out a military operation that deported 1,074,277 Mexican immigrants.

They loaded them onto CARGO ships at gunpoint across the country and dumped them back in Mexico EVEN IF THEY WEREN'T FROM MEXICO.

Now I know y'all won't believe this next part but I'm sure whatever device you're reading this on has a Google bar.

The official name of this operation was "Operation Wetback."

What does this have to do with Trump, America or anything?

Well Harlon's success really propelled him. Soon he left the Border patrol and joined another organization.

At the time, the organization was really a sports league. But Harlon had a great idea. He wanted to politicize it.

He strongarmed his way to the leadership, took a hardline stance, started endorsing political candidates and transformed the group into what it is today

They would eventually find out that Harlon murdered a 15-year-old.

He denied it until he was finally forced to admit t.

But back to Operation Wetback.

It just so happened that, on the SAME DAY, later that afternoon, the Supreme Court ruled that the Topeka Kansas Board of Education's policy of segregating schools by race was unconstitutional, even if the schools were equal.

A year later racists would kill Emmett Till and Rosa Parks would refuse to give up her bus seat, which most people accept as the beginning of the civil rights movement, ruining America forever, according to Donald Trump

But early on the morning of May 17, 1954, America was rounding up immigrants in the biggest deportation in history, Jim Crow was taking his last breath and the NRA was gaining a hero

If you're Donald Trump, THAT is when America was Great. Has to be