Here's some detail on how we determined that Flight #PS752 had turned around and was heading back toward Tehran's International Airport.

The preliminary report by the Iranian Civil Aviation Organization also stated that #PS752 turned right after take-off, so deviating from its intended path to Kyiv, and then managed to head back in the direction of the airport while being on fire.  https://www.flightradar24.com/blog/wp-content/uploads/2020/01/Iran-CAO-PS752-Initial-Report.pdf … 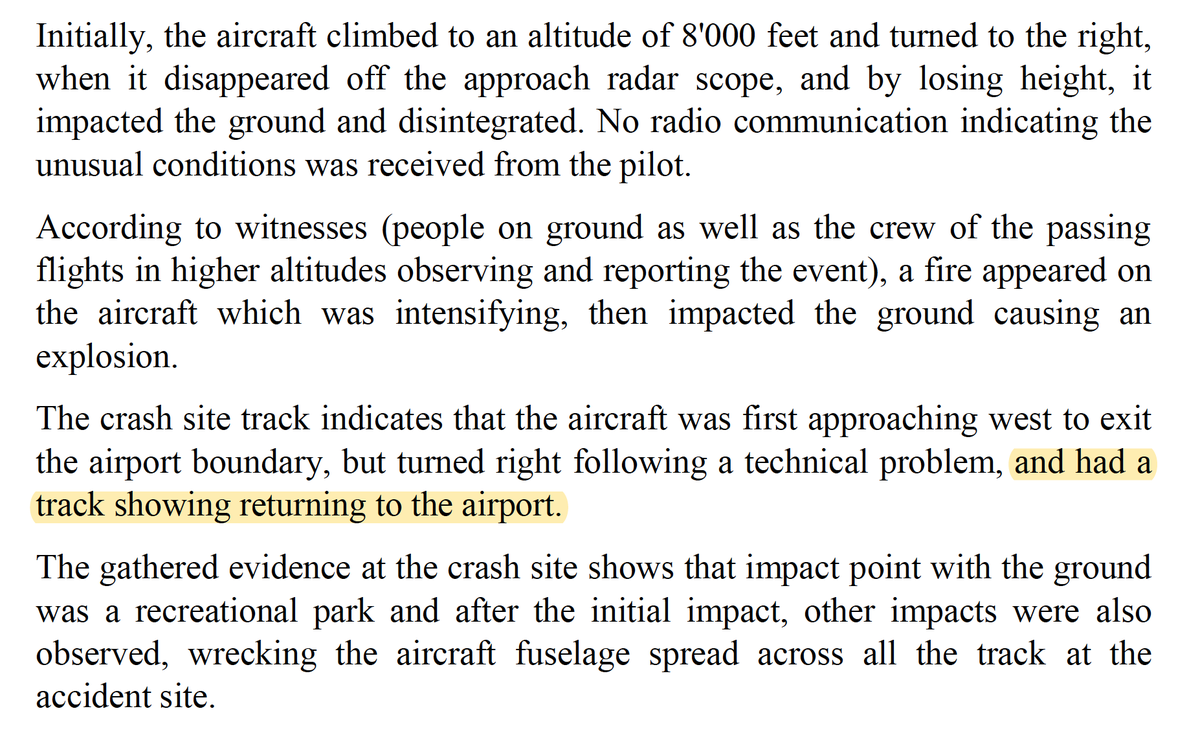 The @nytimes visual investigations team has obtained a high resolution version of the video purportedly showing a missile being fired at #PS752. We've verified the video's location and have more information from the person that filmed it. Stay tuned.

The video shows an object exploding in the air, near a location where #PS752's stopped transmitting its signal. The plane didn't explode, managed to turn back towards the airport, but crashed quickly, the @nytimes has determined.  https://www.nytimes.com/2020/01/09/video/iran-plane-missile.html …

This is a developing story. Check back for a detailed breakdown of the video, with @malachybrowne, @sskerrr, @tiefenthaeler and many more.  https://www.nytimes.com/2020/01/09/video/iran-plane-missile.html …

The investigative group @Bellingcat has independently verified the location of the video.

The person who captured the moment started filming after hearing “some sort of shot fired”, the @nytimes learned.

Two photos of an apparent Tor M1 (SA-15) missile remain are circulating on social media. These photos are not verified. See @Bellingcat for more. If they happen to be from the #PS752 incident, they were probably found somewhere around Parand.

Earlier today, @CBSNews reported that U.S. officials are confident that Iran shot down #PS752, based on intelligence picking up signals of a radar being turned on and satellites detecting two surface-to-air missile launches shortly before the crash.  https://www.cbsnews.com/live-updates/plane-crash-us-officials-confident-iran-shot-down-passenger-jet-bound-for-ukraine-today-2020-01-09-live-stream-updates/ …

It is worth stressing that the @CBSNews report said that the “plane was believed to have been mistakenly targeted.”

Canadian PM @JustinTrudeau says his country had intelligence that an Iranian surface-to-air missile brought down #PS752, which was carrying 63 Canadians among its some 176 passengers and crew. “We recognize that this may have been done accidentally.”  https://www.nytimes.com/2020/01/09/world/middleeast/iran-plane-crash-ukraine.html … 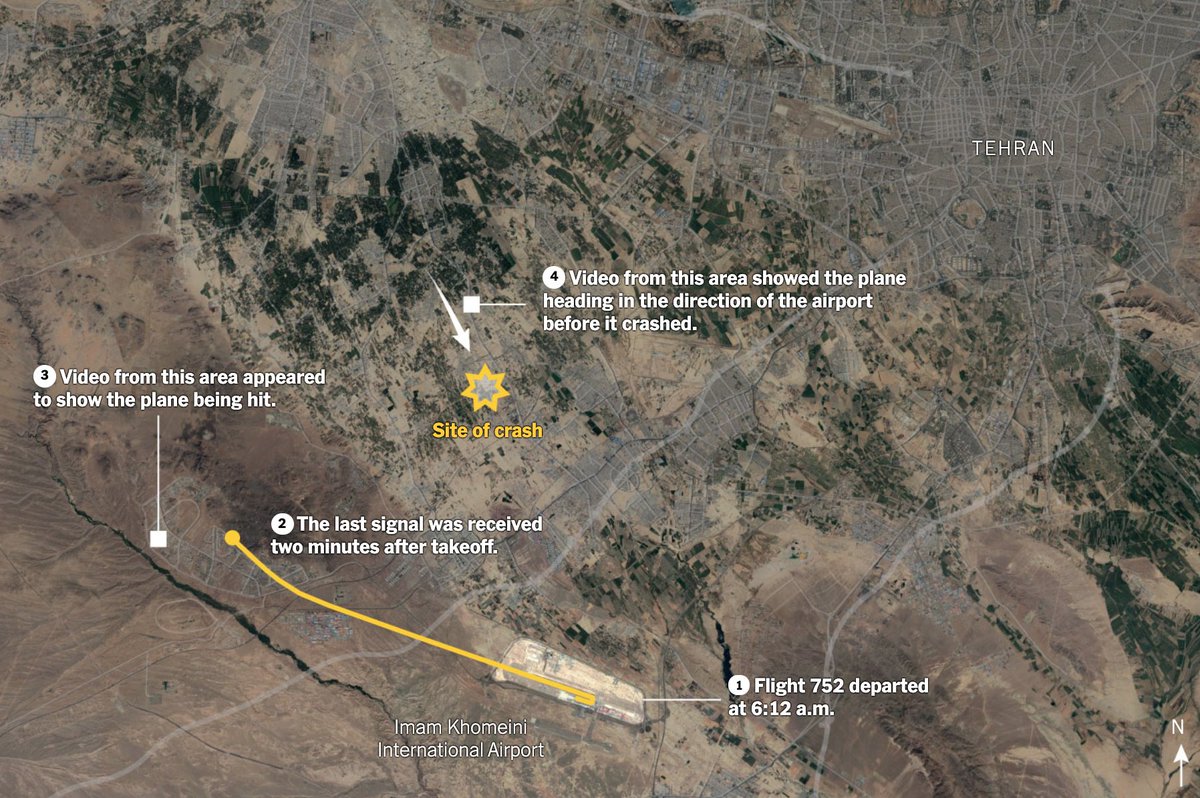 “Although both the U.S. and Iran now appear to be backing away from a larger military confrontation, the new intelligence suggests that the loss of life from the downing of the plane was a direct result of those heightened tensions between the countries.”  https://www.nytimes.com/2020/01/09/world/middleeast/iran-plane-crash-ukraine.html …

For those of you asking me why the person was filming.. Do remember that this happened hours after Iran launched over a dozen of ballistic missiles at U.S. targets in Iraq, with Tehran presumably bracing for retaliation. This person hears a bang outside, starts filming. 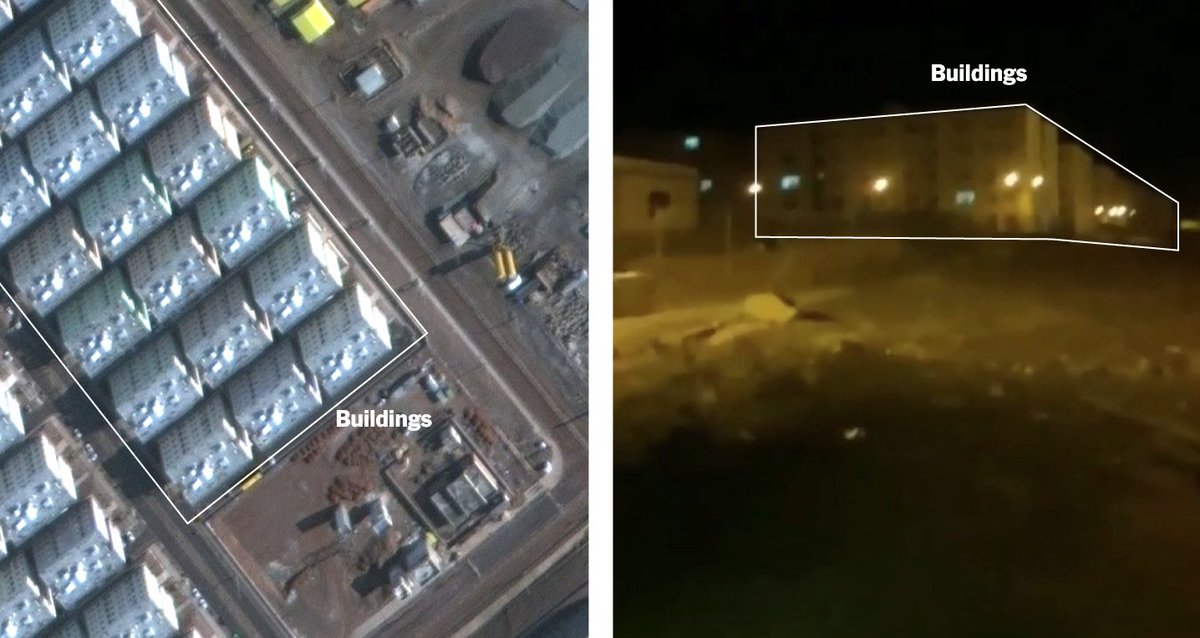 A detailed description of the video's geolocation can be found at @Bellingcat, whose investigation team and wider community deserve praise not only for analyzing and verifying publicly available material of the incident, but also finding and archiving it.  https://www.bellingcat.com/news/mena/2020/01/09/video-apparently-showing-flight-ps572-missile-strike-geolocated-to-iranian-suburb/ … 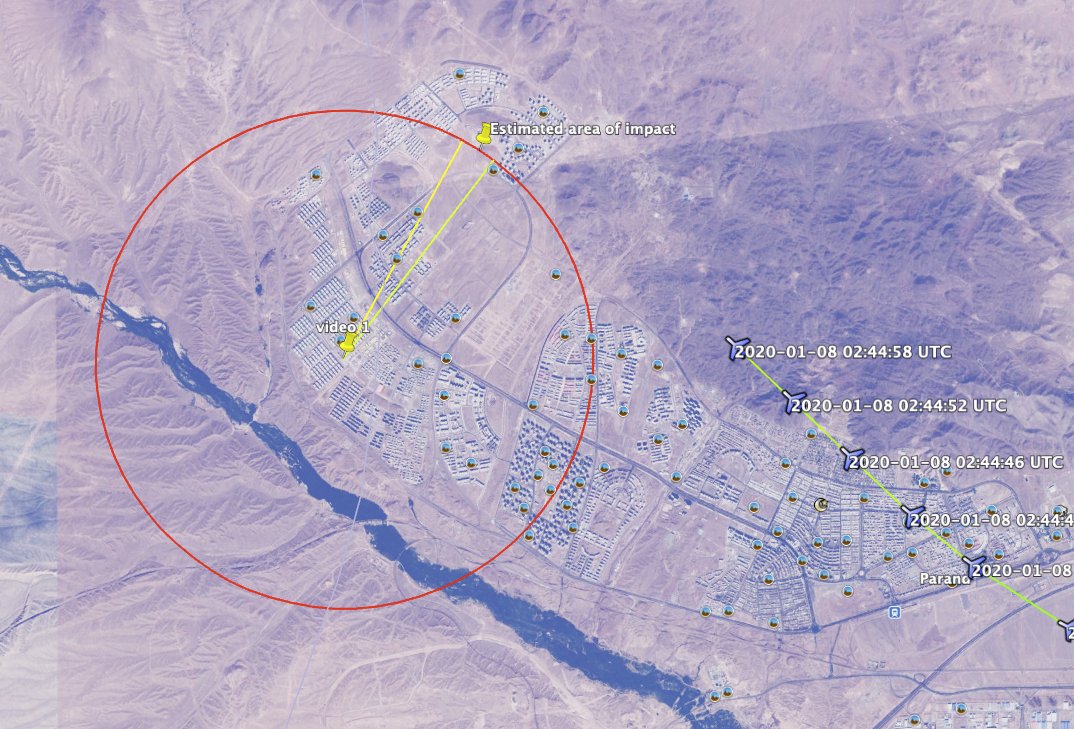 An American official told @nytimes that two missiles were launched from an Iranian air defense system identified as the Tor M1 (NATO reporting name is SA-15). A working theory is that the video shows the second missile, as @malachybrowne writes here.

See this thread by @RALee85 for a detailed breakdown of Iran's Tor-M1 systems, of which they bought 29 in 2005 for an estimated $700 million.

Here's daylight footage from the exact location of the video that was breaking news yesterday.

Geolocation of this video would fill in a gap of the flight path between moment of apparent missile impact and the moment right before the crash.

My colleague @dim109 slowed down the missile impact video and zoomed in when #PS752 appears to be visible.

Ukraine’s main intelligence agency, the S.B.U., or Security Service of Ukraine, said today had narrowed down the possible causes of the airplane crash in Iran to either a missile strike or a terrorist act.  https://www.nytimes.com/2020/01/10/world/middleeast/iran-ukraine-plane-crash.html …

IRGC-affiliated Fars News Agency says that Iran will issue a statement tomorrow announcing the cause of the crash of the Ukrainian jetliner #PS752.

Our team has been busy reconstructing the #PS752 incident, so I didn't manage to post this earlier: three synchronized videos showing the Ukrainian airliner on fire and then crashing. Geolocations below. 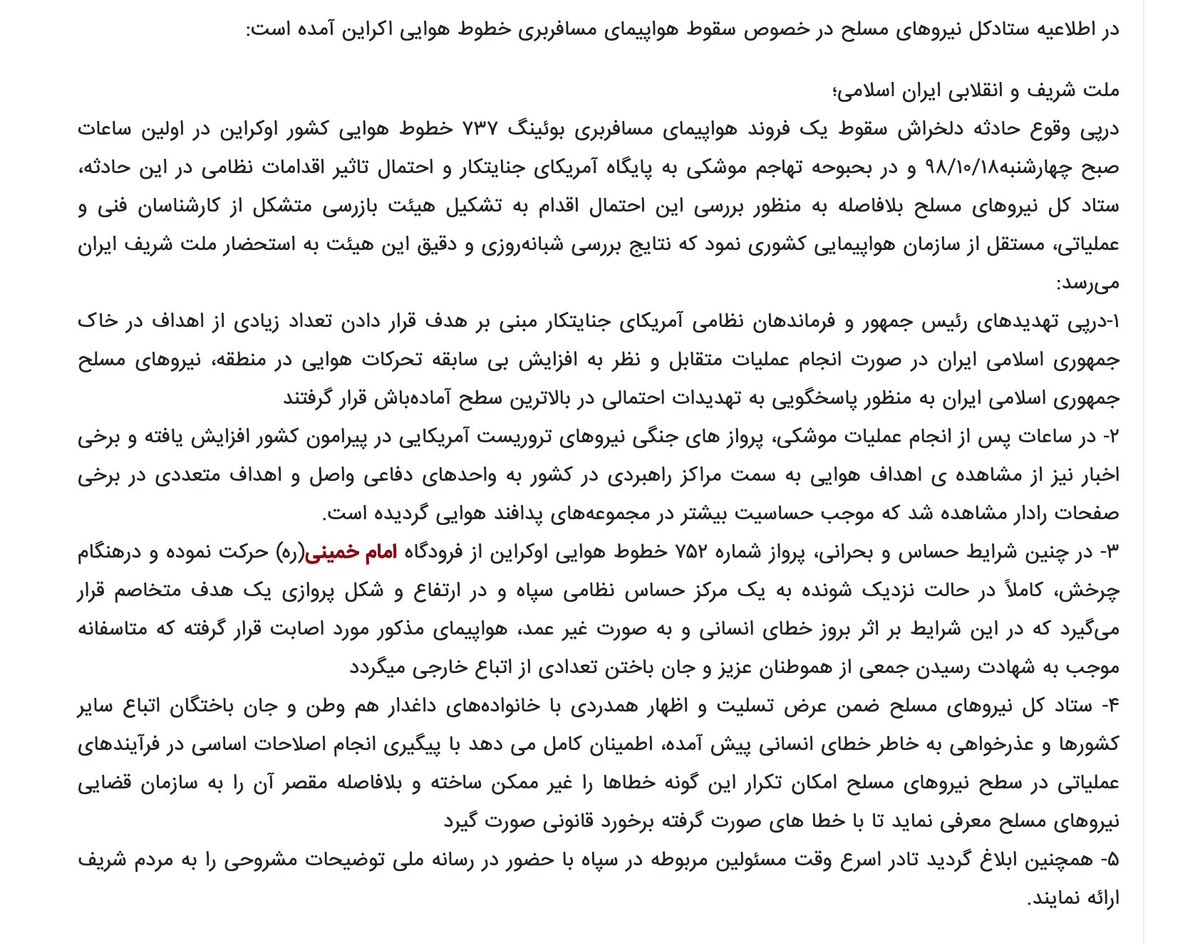 The statement claims that the #PS752 had turned towards a “sensitive” IRGC military site. Our analysis suggests that it's probably the site in the top left corner of this image. Last transponder location marked on the right. Approximate location of missile impact marked in red. 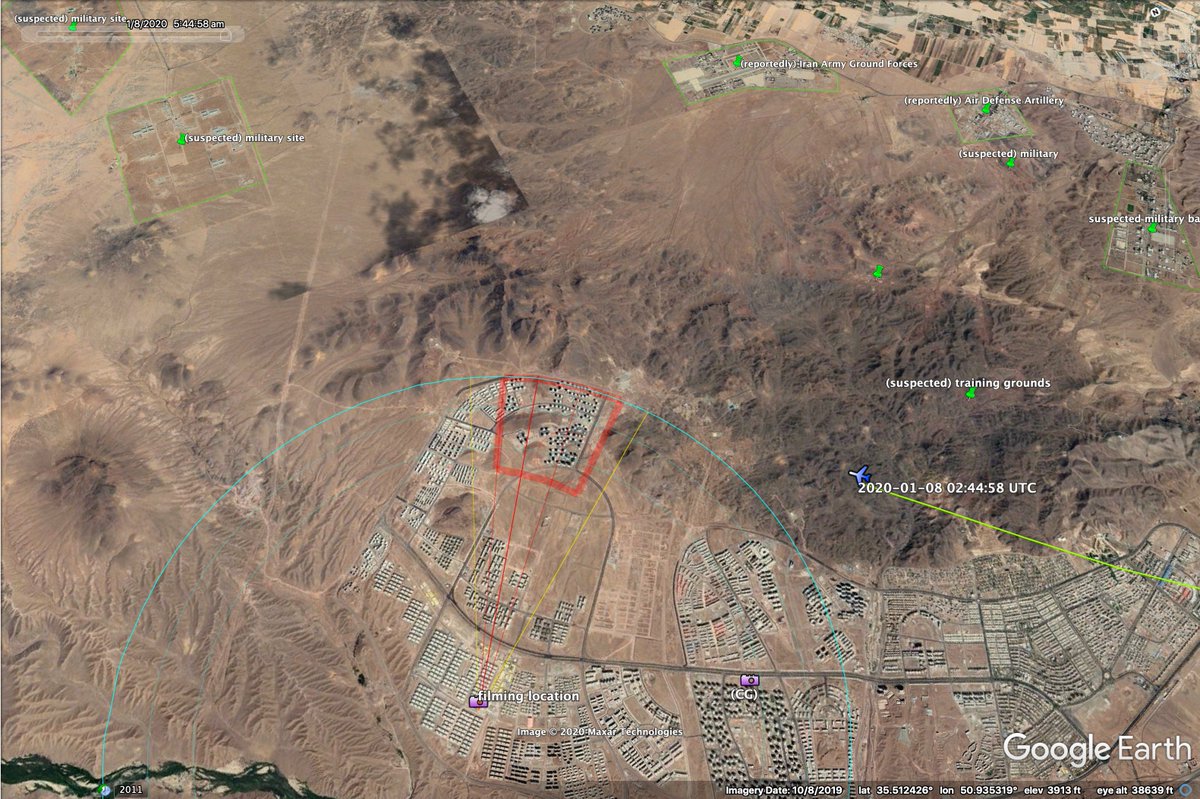 The statement stresses that the “human error” occurred during the very high tensions with the US. Bear in mind, #PS752 took off 10 (!) minutes after Iran's foreign minister said the missile attacks on American military targets in Iraq had been concluded.

Why flights resumed so soon after (and during?!) the military strikes remains unclear. #PS752 was one of 19 (!) flights that took after Iran launched its first missiles, @flightaware data shows. Read more:  https://www.nytimes.com/interactive/2020/01/10/world/middleeast/iran-tehran-airport-crash-flights.html … 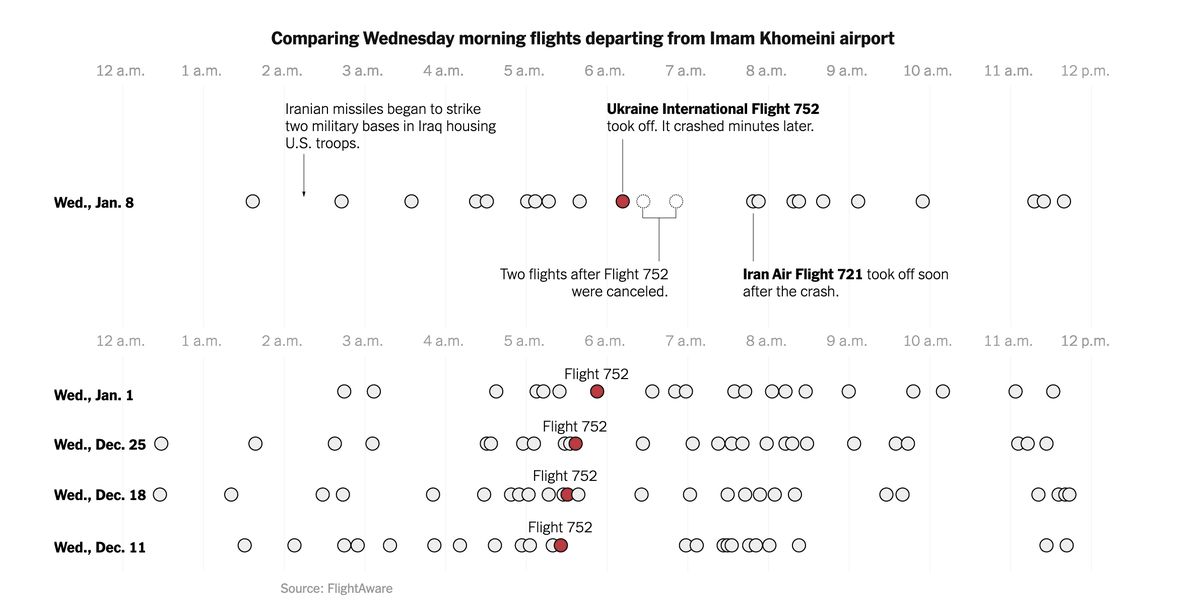 As @AricToler rightly said, Iran admitting their responsibility for shooting down #PS752 is the best possible outcome for the families of the victims.

Person responsible for shooting down PS752 will face legal consequences, statement said, and military will undertake “major reform in operations of all armed forces” to make sure this never happens again. IRGC ordered to give a full public explanation.  https://www.nytimes.com/2020/01/10/world/middleeast/missile-iran-plane-crash.html …

Around 36 hours ago, we verified what turned out to be the smoking gun: video showing PS752 getting hit by a missile. Hereby a very big shoutout to @NarimanGharib, who provided it to the @nytimes, and the videographer, who would like to remain anonymous.  https://www.nytimes.com/2020/01/09/video/iran-plane-missile.html …

(It was the visual investigations team spiritual and actual leader @malachybrowne who geolocated, in case you wondered.)

NEW: This CCTV footage appears to show an Iranian air defense system, northeast of Parand, firing a missile. I've geolocated it right under the approx. location where we think the missile hit the jet. Date is correct (18 Dey 1398) but time is off (7:48), maybe due to settings.

The shadows indicate the missile exploded in area above/near the camera position. That fits with the area (marked in red) the @nytimes, @bellingcat and other online sleuths identified as the impact location based on sonic and visual clues in the earlier video from two days ago. 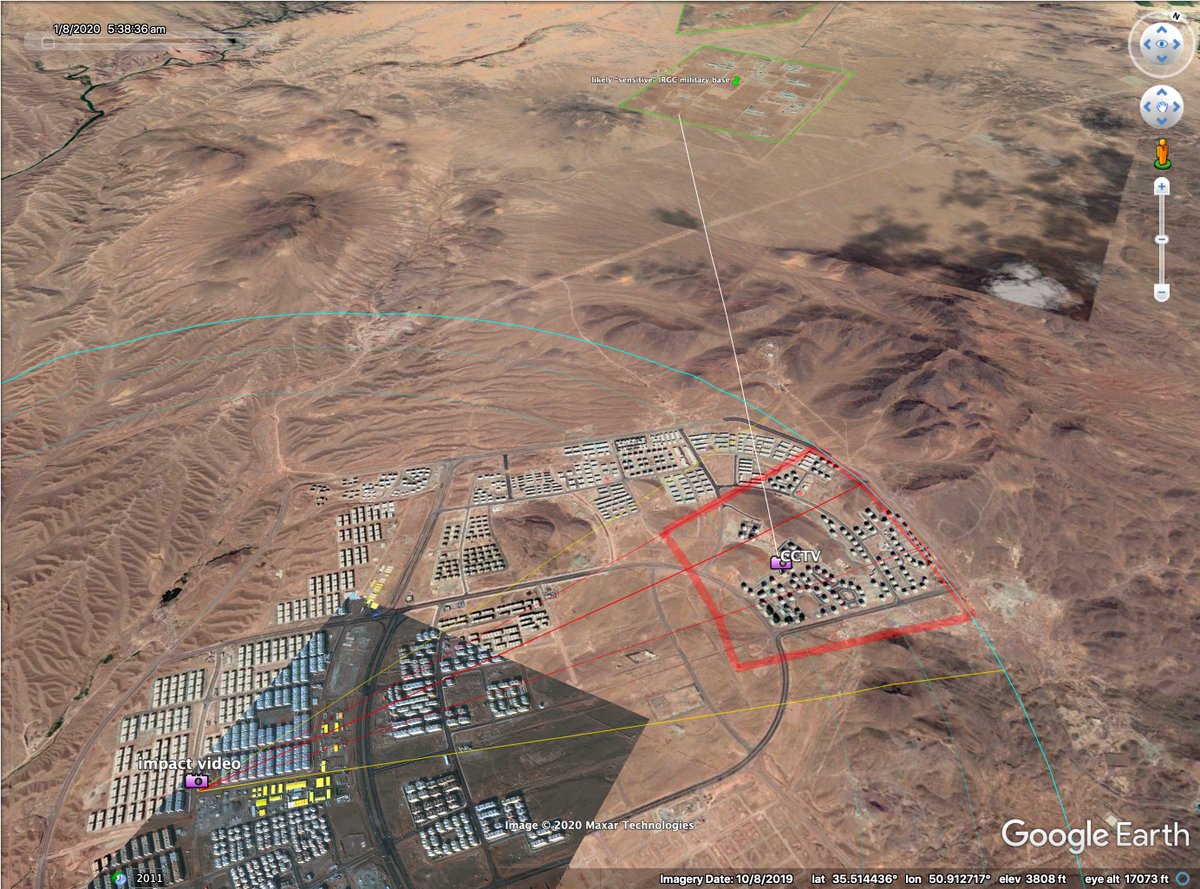 An IRGC commander has publicly accepted responsibility for downing Flight PS752. “The officials, including aviation authorities, who kept denying a missile hit, are not guilty. We are to blame for everything.”

Amir Ali Hajizadeh is IRGC's Aerospace Force commander. In contradiction to the earlier Iranian Armed Forces statement, he says that Flight PS752 *did not* deviate from its path. Someone mistakingly identified the jet as a cruise missile.

IRGC commander Hajizadeh says that the anti-aircraft system was deployed to Bidganeh (بیدگنه), the green pin on his map, around 12 pm local time. Flight PS752 was about 19 km away from the system when its missile was launched, he says. H/t @ARastabi. 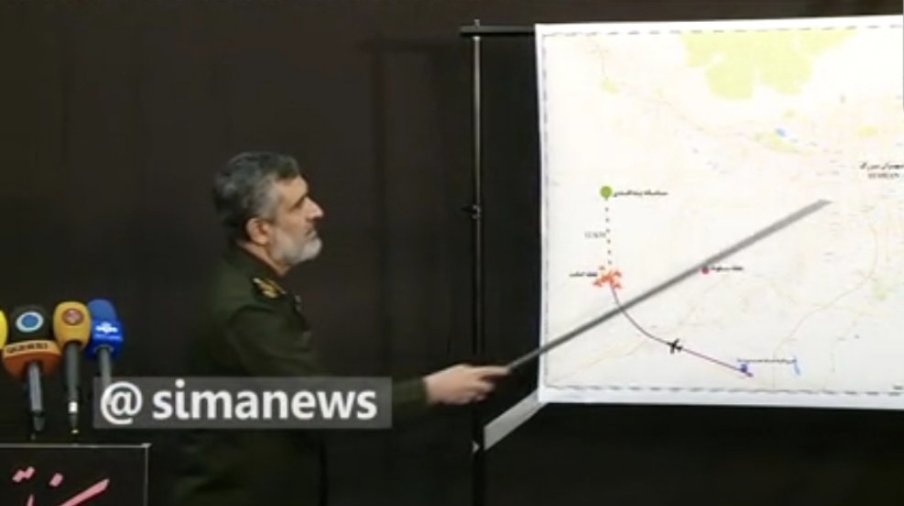 The operator of the Iranian air defense system that shot down Flight PS752 will also give a statement in several hours, according to the IRGC commander. 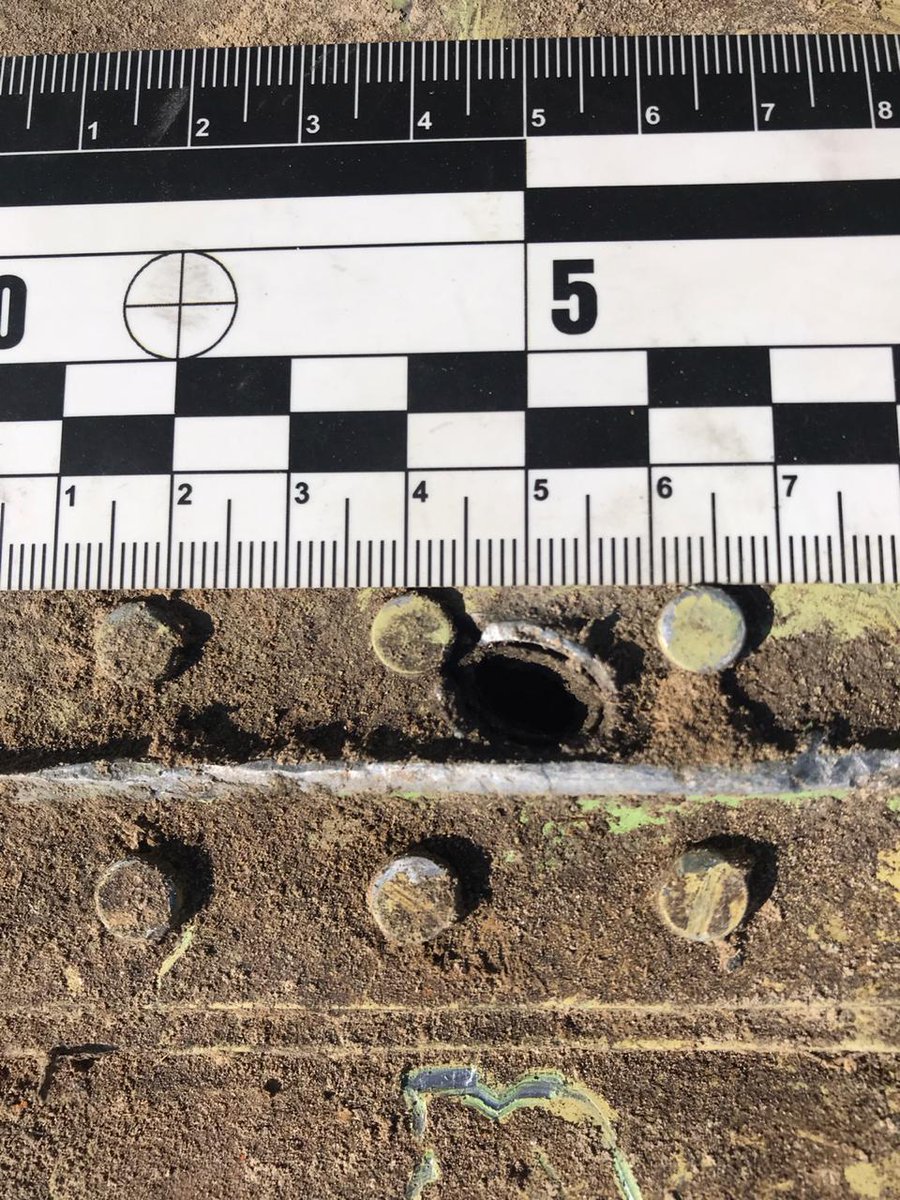 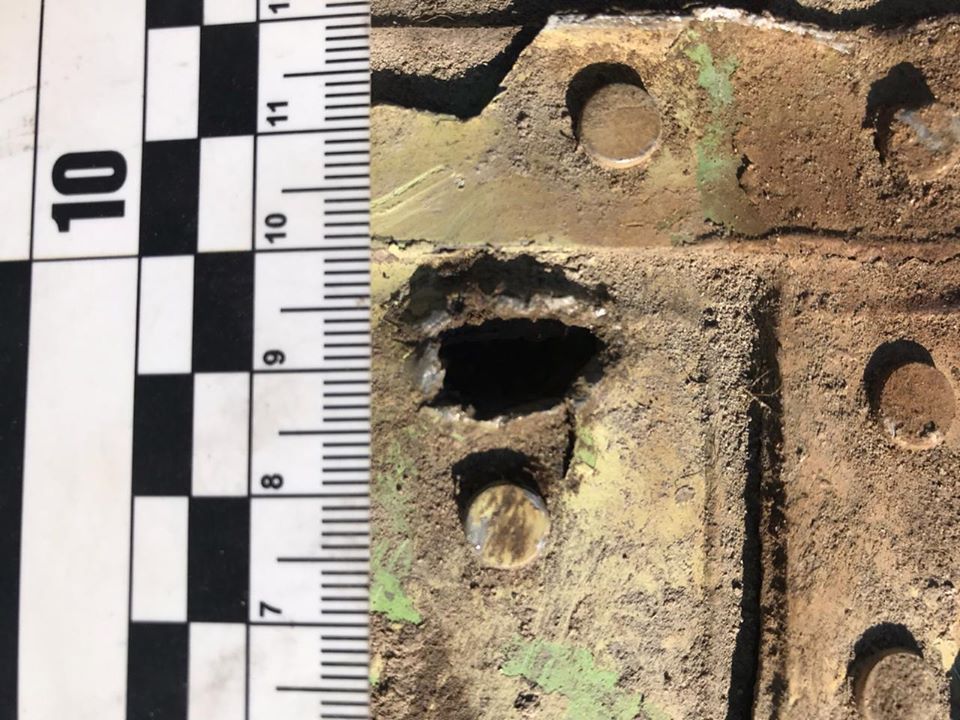 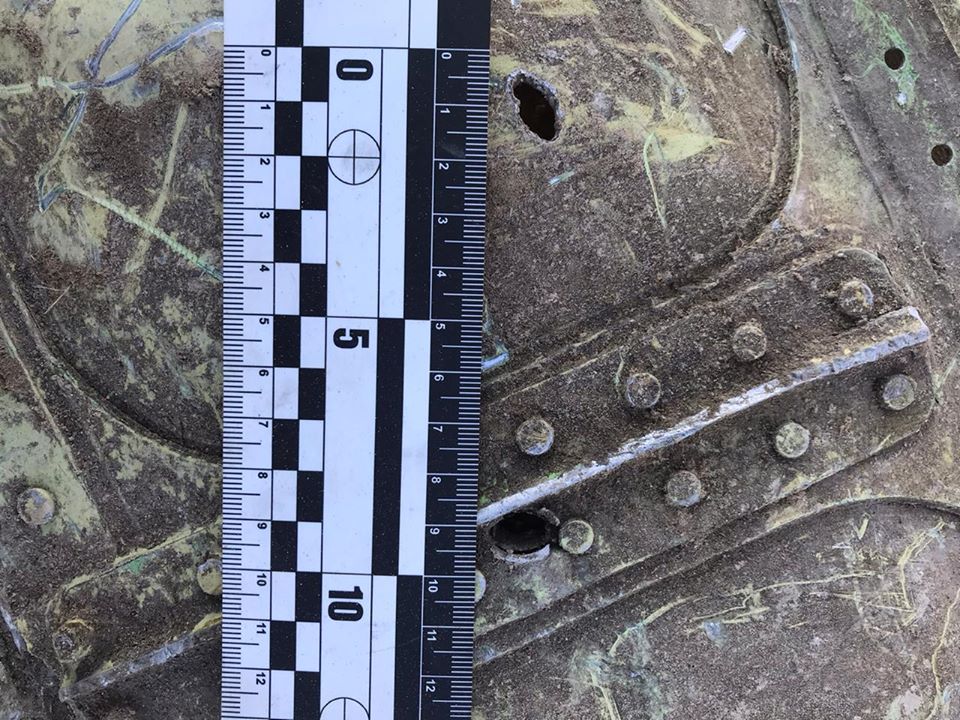 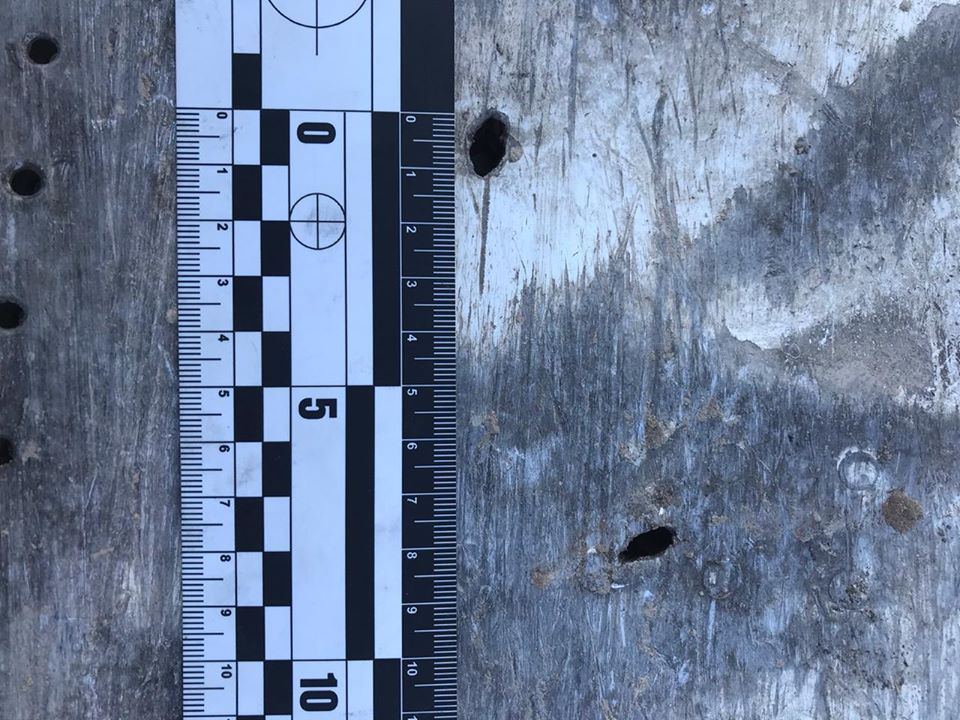 This post-crash high resolution satellite image by @Maxar clearly shows the path of the debris. 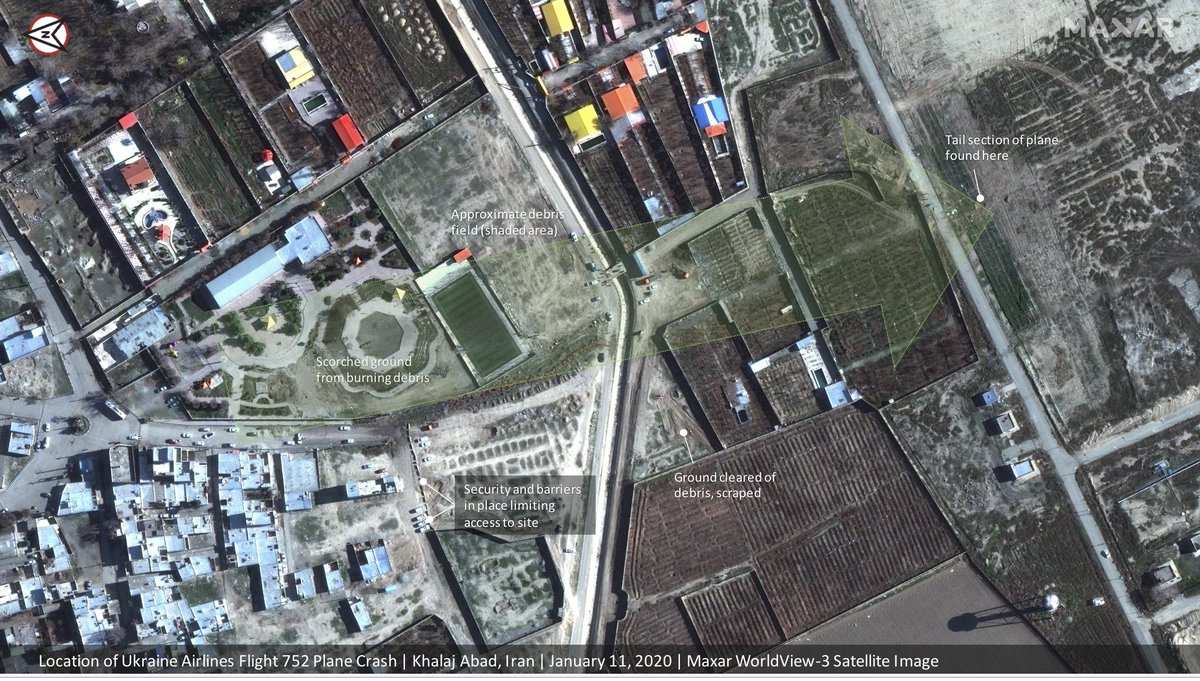 Here's a part of it in more detail. Courtesy of @Maxar. 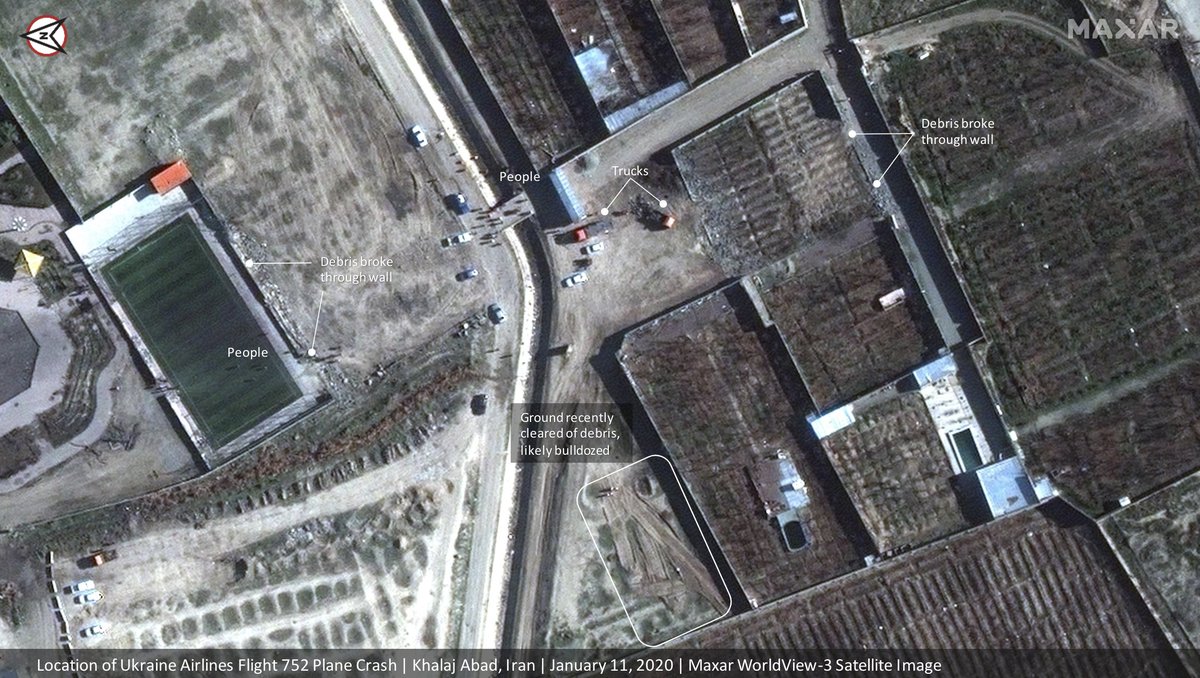 Here's a picture shared by Ukraine's presidential office showing PS752's cockpit that is said to have indicated shrapnel damage. We've carefully mapped out the debris at the crash site, but never came across the cockpit. Which suggests it may have been removed rather quickly. 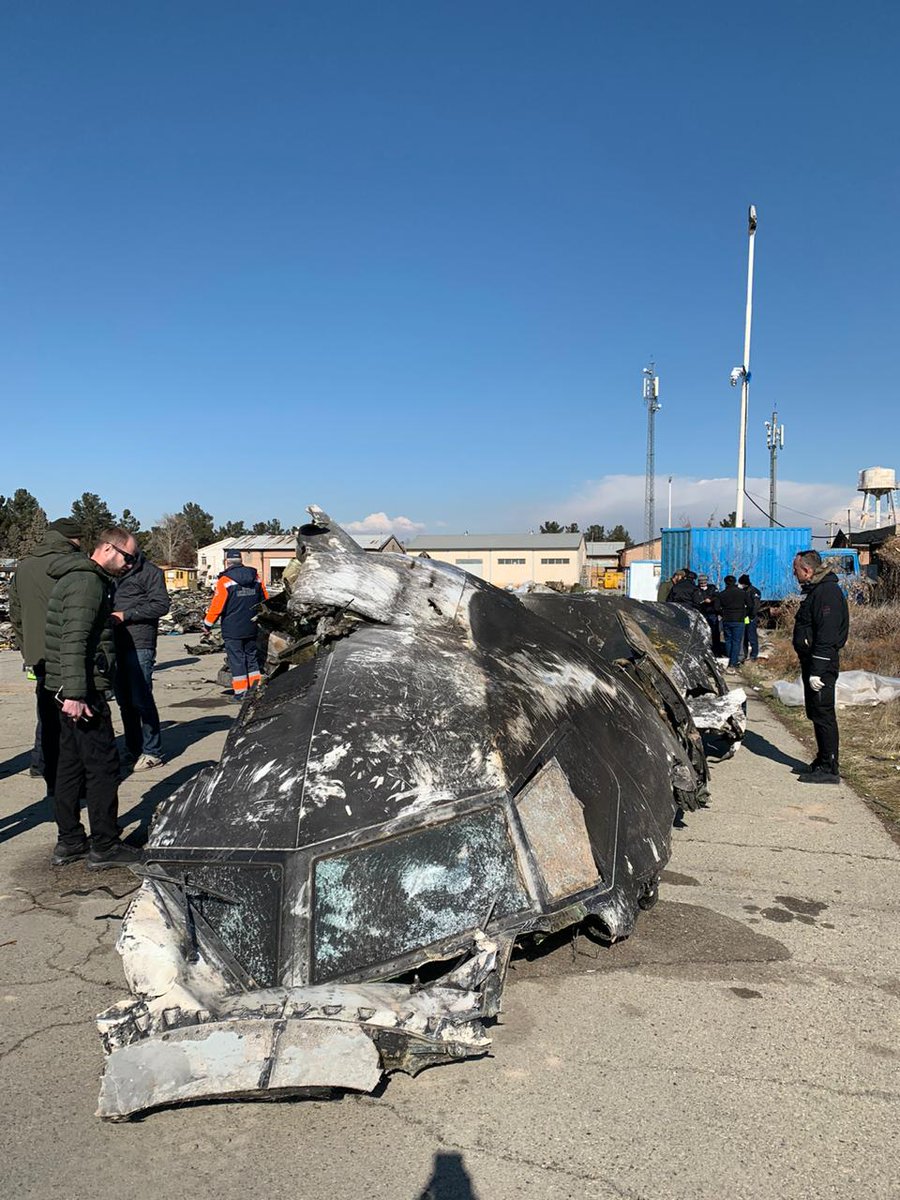 As @aldin_ww points out, the debris shown by Ukraine's presidential office is collected near the entrance to Tehran Imam Khomeini International Airport.

New video confirms the working theory that *two* missiles were fired at PS752, around 30 seconds apart. @bellingcat surfaced the video, and quickly, the open source community like @john_marquee, @gianfiorella, @sl0zhny and @JakeGodin geolocated it.  https://www.nytimes.com/2020/01/14/world/iran-plane-crash-video.html …

And obviously the @nytimes team that worked on it: @malachybrowne @evanchill @babimarcolini @heytherehaIey @tiefenthaeler. And @javad_baggins who brought the video to Twitter's and YouTube's attention. Great digital collaboration, as rightly put here: