I promised that we'd publish a new #Repo -blog today, with some "breaking info". Unfortunately, we discovered an error in the background info, which trashed the basis of our argument.

What we were trying to explain was this. 👇 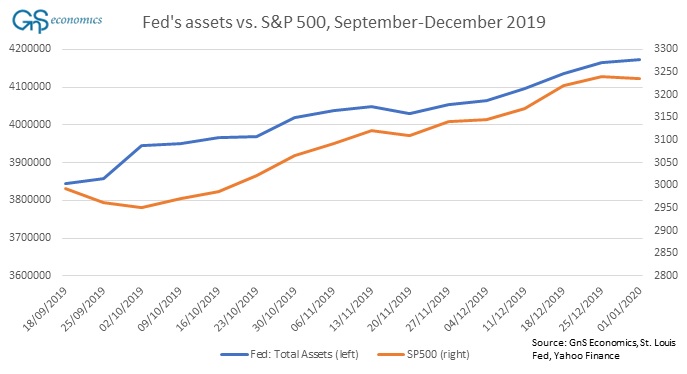 After the #Fed started its #repo -operations, #StockMarket has been in state of relentless melt-up.

As suggested by @zerohedge , hedge funds have been likely to use repo to increase their leverage.

Like nicely elaborated by @bondstrategist , they have at least "thrown the moral hazard out of the window".

The #Fed is guaranteeing liquidity in the #repo -market, which basically removes all the risk, at least, in the markets of short-term paper. 3/

We have pondered two things:

1) Does the behavior of sellers of T-bills (short-term paper) differ from sellers of Treasuries (long-term paper), and
2) Has the #Fed actually created a "leverage-machine" through its #repo -operations and the Not-QE? 🤔
4/
@DiMartinoBooth

We have been unable to locate any research or info on how the behavior sellers of T-bills could differ, but it's likely that the ones that sell these to the #Fed are mostly investors.

In earlier QE:s, households and corporations were the largest group selling Treasuries. 5/

This implies that, when the #Fed concentrates on the T-bills, it will lead to higher speculation, because it buys from institutional and private investors.

And, they probably use the money provided by the #Fed to speculate more than average households in earlier QEs. 6/

The leverage-issue troubled us for a long time.

Our case point was that the short-window between issuance of T-bills and the purchase of them by the #Fed would make it possible to enact a "leverage-loop" by using money from the #repo to obtain Treasuries used in repo, etc. 7/

However, the 'sponsored repo' is purely on over-night operation, where the money borrowed from the #repo is paid back the next day.

This hinders the ability of hedge funds to use the repo as a "leverage loop". 8/
https://blog.pimco.com/en/2019/12/sponsored-repo-salve-for-a-constrained-repo-market-or-potential-funding-destabilizer …

Whether they still could do it through, e.g., swap operations, enabling them to multiply the leverage from a T-bill through repo, remains a mystery to us. We just don't know the "plumbing" deeply enough.

Thus, we would highly appreciate any info and/or insight regarding this?
9/

Yet, three rather obvious facts remain.

First is that something is seriously wrong in the #repo -markets, and the QE:s of the #Fed have played a significant role in them. 👇10/
https://gnseconomics.com/en_US/2019/12/14/repo-market-turmoil-staring-into-the-financial-abyss/ …

Second, the #stockmarket has been a manic phase after the #Fed enacted its latest market bailout operations.

What makes it manic is the fact that the global or the US #economy is not improving.

Third, it is very likely that #repo -issues, flamed on 16 Sept 2019, were similar onset for a crisis than the blow-up of the hedge funds of Bear Stearns in June 2007.

This is also painfully clear from the plans of the #Fed. It simply cannot retreat from the repo anymore. 12/

Alas, we are likely to head into a financial abyss, again. 👇