This week in ChinaEconTalk @jordanschnyc offers up a translation of the story of desktop/PC software battle in China of WPS versus Microsoft. It’s a fantastic story for sure with many subtle and interesting lessons about the rise of China. Read here ❤️ 1/  https://chinaecontalk.substack.com

2/ Microsoft has a very long history in entering the markets in Asian countries, starting with Japan in earliest days of the company. I say “Asian” because technically a huge challenge was figuring out how to represent Asian languages/characters on computers. Let’s start there.

3/ If you think that seems weird, consider that there is even a current journal (ACM Transactions on Asian Language Information Processing). As early as the 40’s IBM was working to solve “Chinese typing”. This wonderful book chronicles typing in Chinese.  https://mitpress.mit.edu/books/chinese-typewriter …

4/ Mapping a finite number of keys to a large set of characters became a significant area of research crossing linguistics, human factors, and ultimately machine learning.

5/ But it also needed to translate software. Based on the early business success in Japan, Microsoft began efforts to enter the China market. In the 80’s this was challenging for many reasons (it was still a Cold War era).

6/ Difficult challenges like “geo political” topics were new to Microsoft (compared to IBM for example) and there were quite a few stumbles. Things that seemed like “bugs” to us were major international issues: the wrong flag in clip art, use of an incorrect geography name, etc.

7/ In one particularly difficult challenge (which is also a case study used for many years at @HarvardHBS about entering the China market), a version of Windows was held up in Import Customs bc work on the product was done in Taiwan which made it ineligible for import. (Complex)

8/ Back to the IME. Even with MS-DOS and Windows, the state of the art was that most applications built their own IME for input. In fact, apps competing based on the quality of their own IME. That was the anchor for China’s WPS company building a word processor.

9/ This is a classic case of innovation in a platform starting with apps. Having an IME that is excellent benefits all apps (like having good networking, file sharing, etc.) But it makes for bumpy competition just like any bundling/integration can. Especially so in China market.

10/ Office invested significantly in the Japan market starting in the mid 1990’s. This involved many market-specific features (like chart types, table formatting, and so on that were common only in Japan). This included an IME. It was natural to continue to expand to China.

11/ As a result there was a large R&D team (EA R&D) that built the IME technology across Chinese (S & T), Japanese, and Korean. Office shipped with this IME. It was the best of the best R&D working across many countries/disciplines and integrating w/Office. Subset shipped in Win.

12/ That subset made Windows able to bootstrap the whole use of the platform. But apps still competed on IMEs because the notion of “best IME” was still quite a complex topic. Why?

To us western typists, we finally understand the problem the IME solves…

13/ The IME is autocorrect we experience on phones. When we curse our phones in English we can empathize with the IME problem. Now imagine doing that for everything you type. All the time. (Plus there’s complexity in just picking syllables/ characters which is another topic).

14/ When Google entered the Chinese market they too developed an IME. That’s no surprise because the IME is a perfect place where machine learning can help solve. A quick story about what used to be old about IMEs.

IMEs used to ship with a static dictionary of “suggestions”.

15/ Problem is that languages always change. In Japan when iMode phones became a thing, the Japanese word for mobile phone became more popular and needed to get added to the dictionary and prioritized. That meant sending out disks or making ppl FTP some update.

And then there’s just culture—imagine today with TikTok and how quickly slang changes.

17/ So Office is busy doing all this IME work and some of it is making its way into Windows. Still (unfortunately) the piracy rates of Windows and Office are essentially 100%. This is when I went to live in China (2004) and try my shot at meeting with the government and so on.

18/ A decision was made for Windows to begin to enforce anti-piracy measures essentially worldwide. This was not popular anywhere really, but especially unpopular in China. Local argument was economic (affordability) and also “software is like a book, and books should be shared.”

19/ Office decided to let Windows lead here. Over time all software products from most all companies would institute forms of protection. Some sooner, some later. (When visiting a market, popular for Softies to bring back the CDs filled with s/w and product keys, costing 2 Kwai.

21/ For example, the source code program was a global program the Govt Security Program.  https://news.microsoft.com/2003/01/14/microsoft-announces-government-security-program/ … 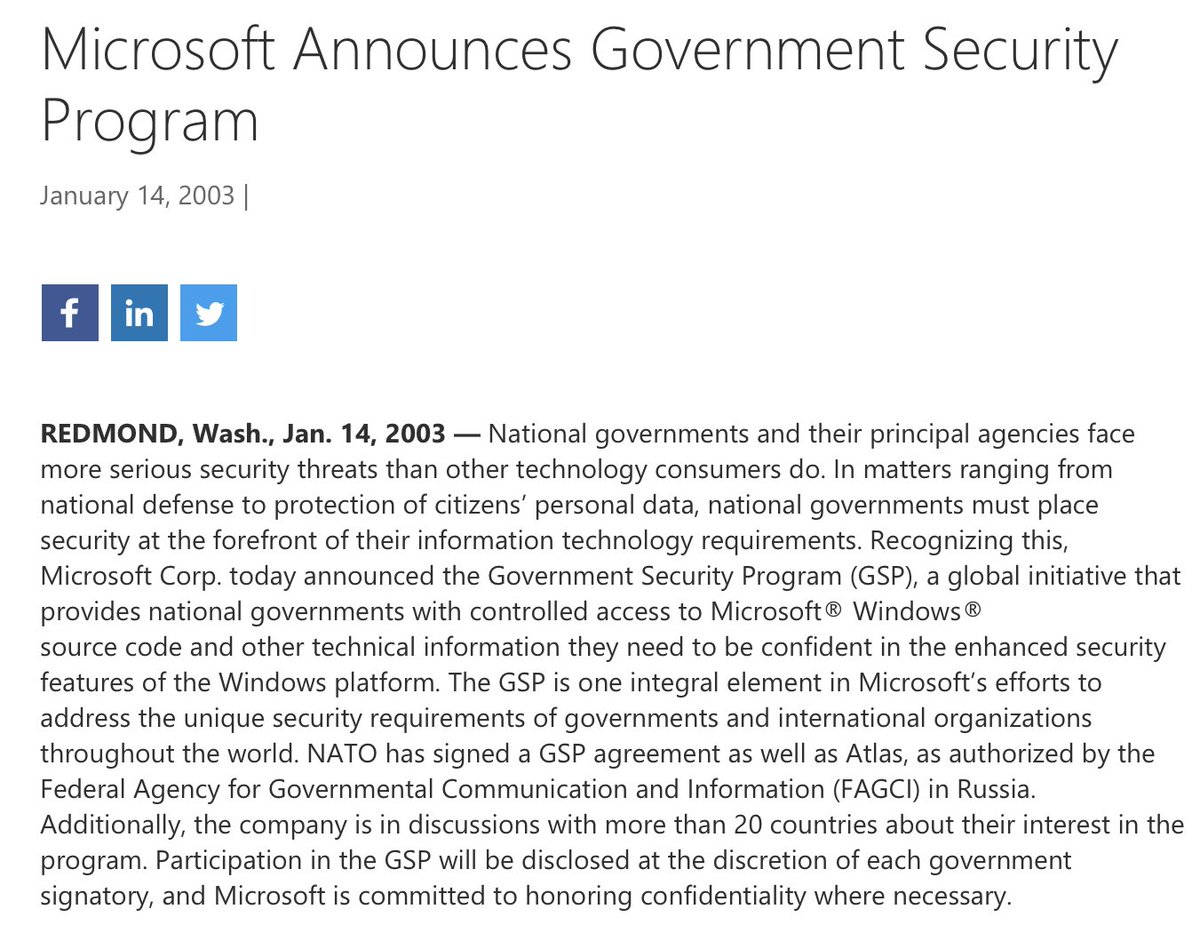 22/ The interoperability agreement described was routine sort of deal in Office b/w vendors exchanging information to convert files back & forth. Then, we were in the midst of flirst moving to HTML/XML which solved the problem and also working on a massinve intl effort with EU.

23/ The competitive dynamic with WPS from my vantage point was very much a feature race, in a market where we had a tough time (at best) to charge for our product we still aimed for winning on features. We also didn’t have the support of the govt :-)

24/ This is a fascinating history w/ more rich detail. Much was written about evolution of IBM mainframes for China in the 60s. PC followed a similar path. The phone got it mostly right from the start.

Building our products in Asia was an absolute highlight for me and many. //