Sometimes, global macro investing comes down to a single focus, the moment when all other factors in a big and complex framework of understanding can be filtered out, because one factor overwhelms all others.

Global growth was already weak and the reflation noise of Q4 was beginning to fade, giving more credence to my underlying view of sustained global economic weakness.

Clearly, there is no space on Twitter for my framework, but I have written extensively in GMI about it.

That led me to remain long of bonds and add last week. But by Sunday night, Asian open, I realised it was time to go aggressively full-risk in fixed income. To my mind the tipping point had arrived that was so pervasive that it was going to overwhelm everything for a few months.

It was not the awful coronavirus, per se, but the market and governments behavioural reaction function that was going to be the only thing that matters.

Everything else could be tuned out - Elections, Brexit, Tech earnings, Phase 1 Trade etc. All noise.

This has come at a time when world trade is negative... 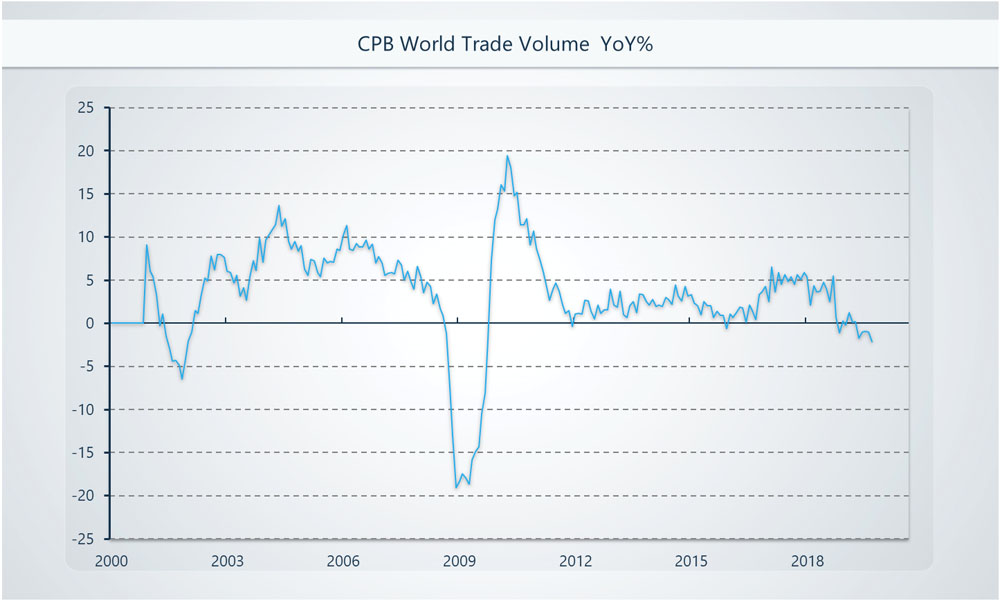 And US ISM is signalling low growth... 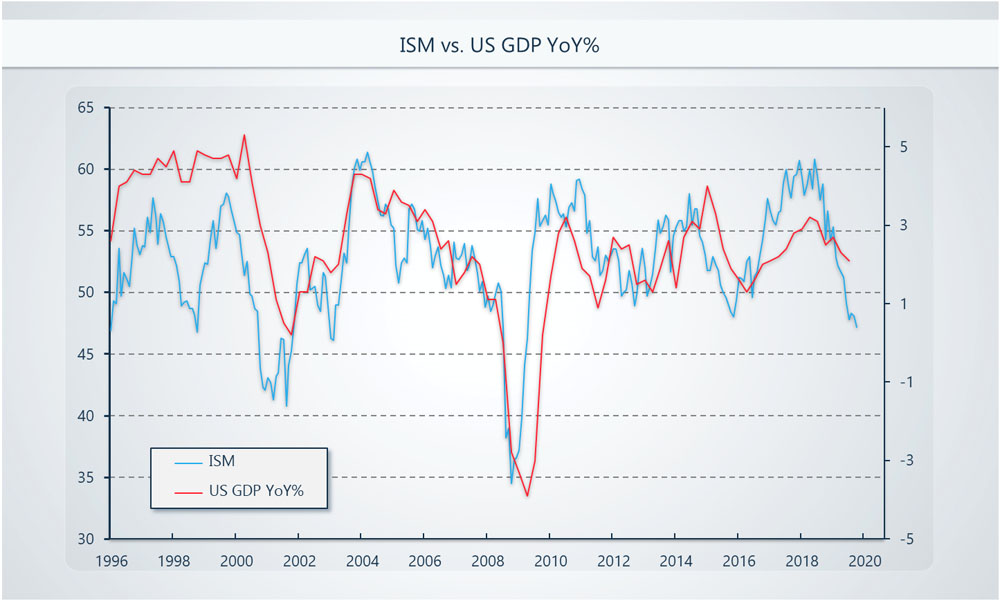 So any demand shock or change in investor risk preference was going to lead to a profound change in markets.

The coronavirus is that.

It is an enormous demand shock to the world and has investors gripped in concerns of this potentially awful pandemic.

My focus here isn't on the virus but the overwhelming reaction by states. Air travel to, and within, China has collapsed. That is 12.5% of all global air traffic. Businesses are closed regionally. Supply chains shattered. Schools are close for 6 weeks. People are in lock down.

And yet it spreads to other countries and their reactions have to be even bigger to stop the spread there to. Fear takes over (rightly or wrong, I just don't know. None of us do). Is this a bigger demand shock than the Gulf Wars and probably 9/11? All came at times of weakness.

The Fed are going to have to cut aggressively and soon. 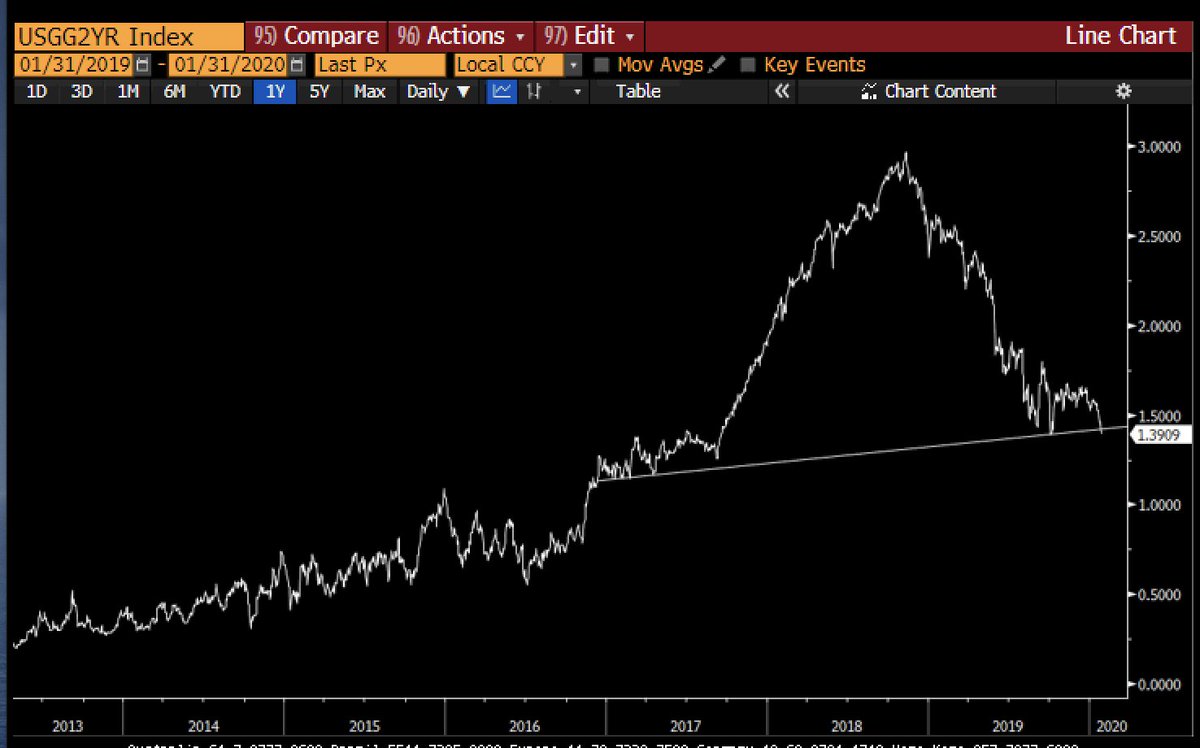 But I think this game we all slave over, is about not trading just the immediate narrative - "growth lower = rates lower", but trading the potential knock-on effects, where you have to go further out on the macro risk curve to get ahead of the market.

I think that there is a not insignificant probability of a emerging market currency collapse and the markets aren't yet pricing it but the signs are there. Take the Korean Wan, for example...not good. 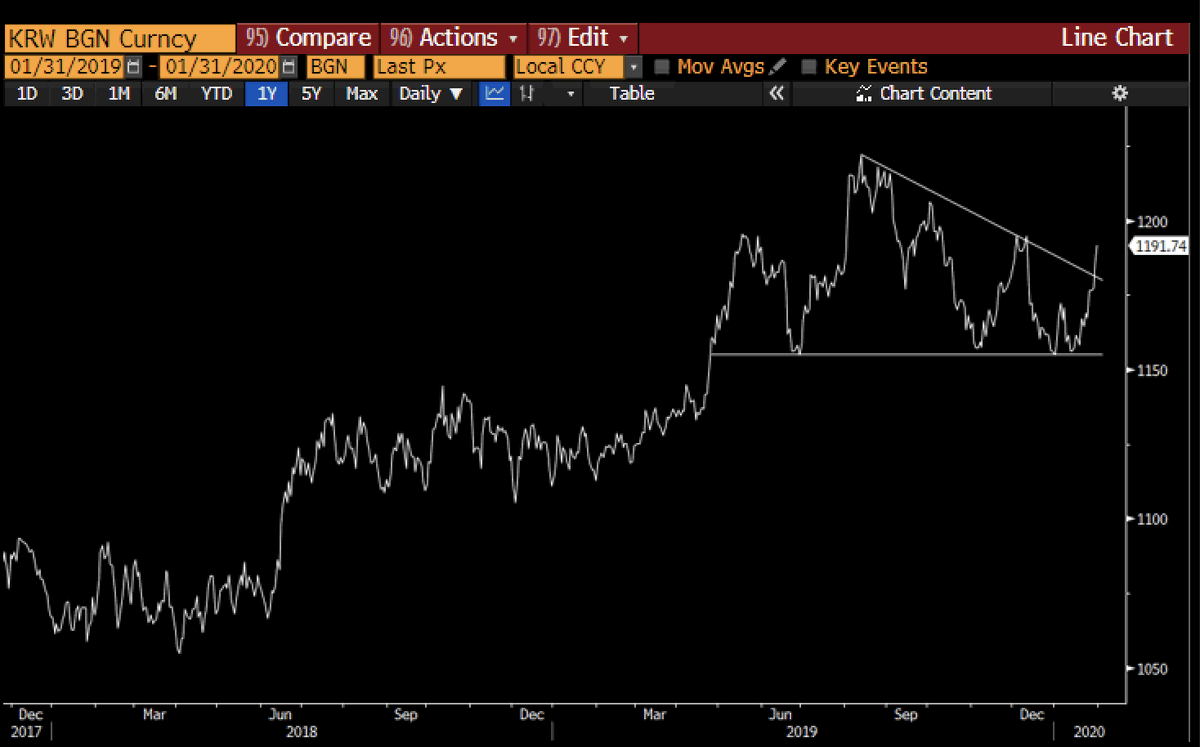 The Aussie, is already in full bear market mode, having broken the H&S of some magnitude and is now hitting new lows... 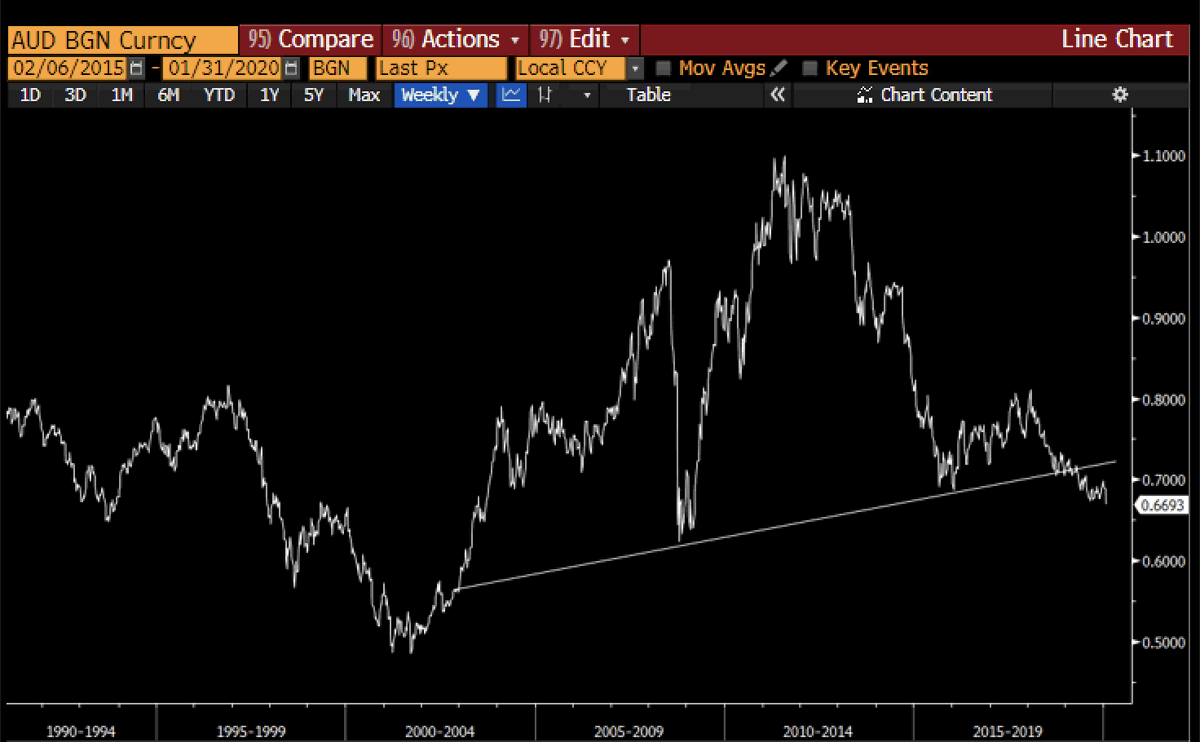 The Chinese RMB looks like it is going to break too, once trading properly recommences... 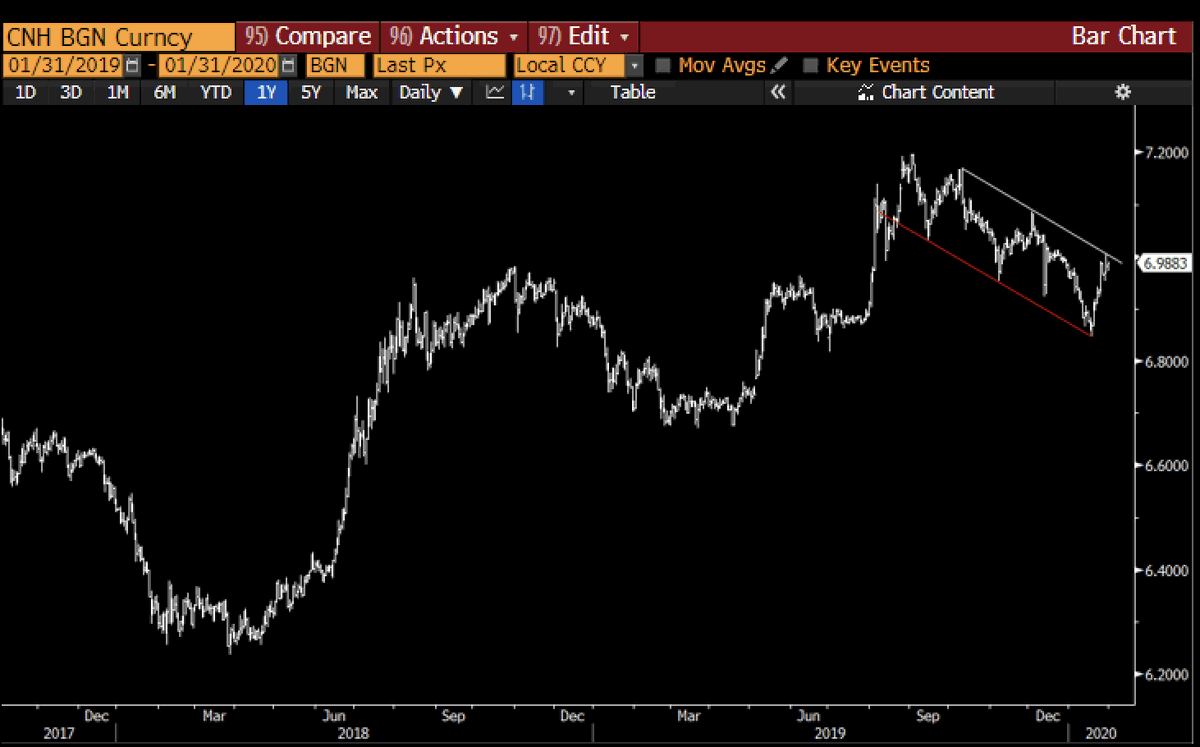 But what could be just an Asian regional weakness takes on more important signal effects when the Brazilian Real is about the break a gigantic cup and handle. You see, Brazil loses on the US/China trade deal and loses again as Chinese demand collapses for commodities... 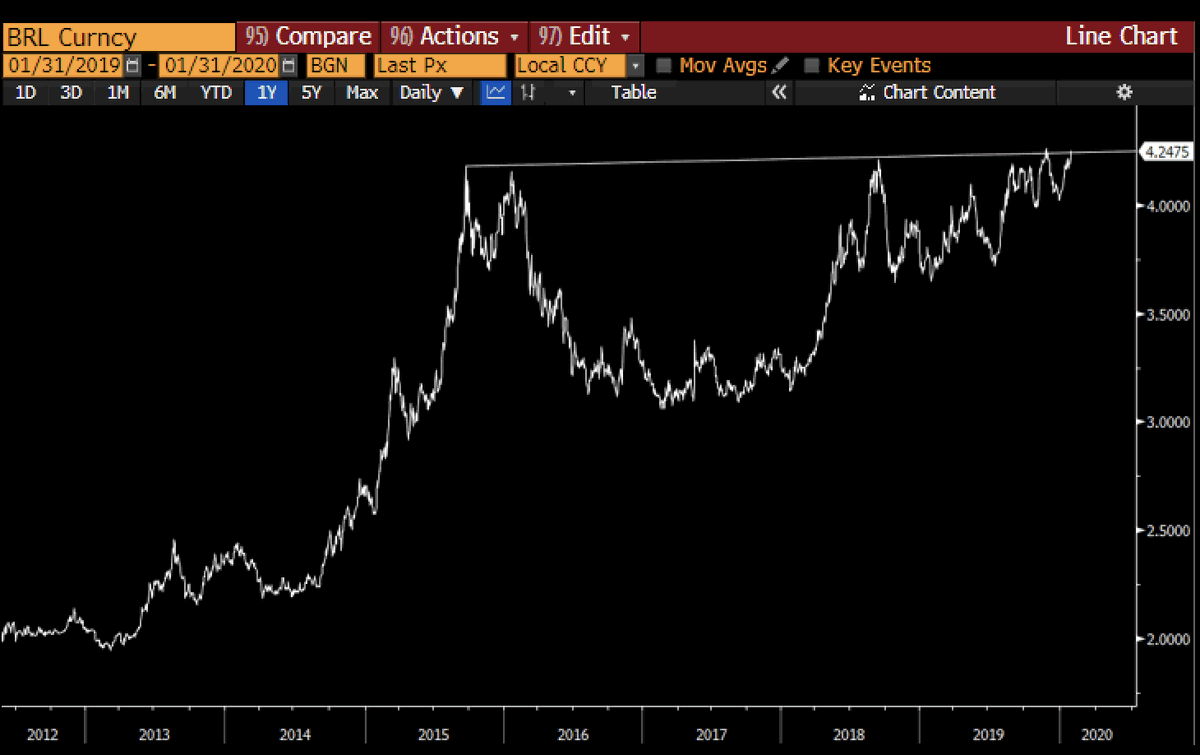 This is a major concern, if it plays out. Many EM currencies also are exhibiting signs that the knock on effects on demand and capital flows might create some big issues, that catches people unaware. The South African Rand and Turkish Lira look next on the chopping block.

The JPM EM currency index is going to break down... 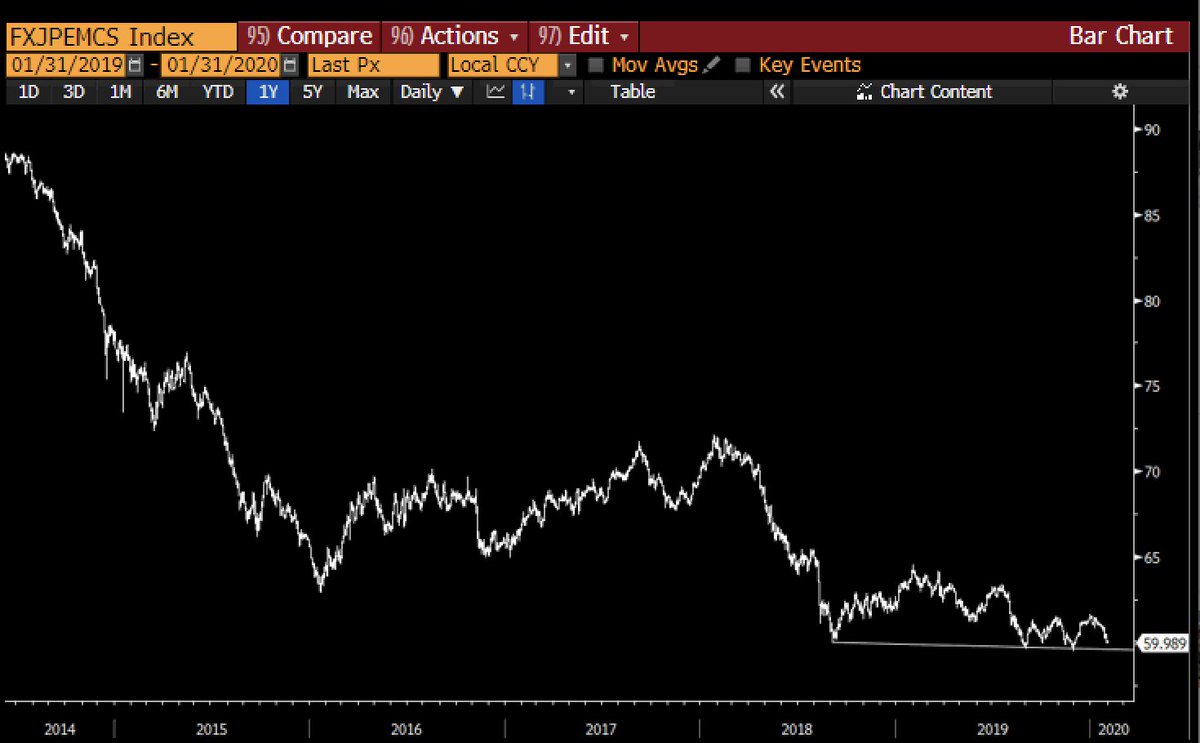 The bond market trend is set. The reaction of central banks is understood.

The commodity markets rightly got the signal fast too.

The knock-on effects are now spreading slowly into the currency markets. That is where I think where the next phase lies...