In October 2017, we noted that it looked like China would end her massive stimulus program.

And so she did. China started to deleverage in September 2017. And the global cycle started to drift down, slowly.

That is, what do you think will happen, when the Chinese stimulus shutdown hits in the January/February data?

It will definitely not be pretty.

The #Eurozone is already on the brink of a #recession , and probably falls into it by the end of Q1. 2/ 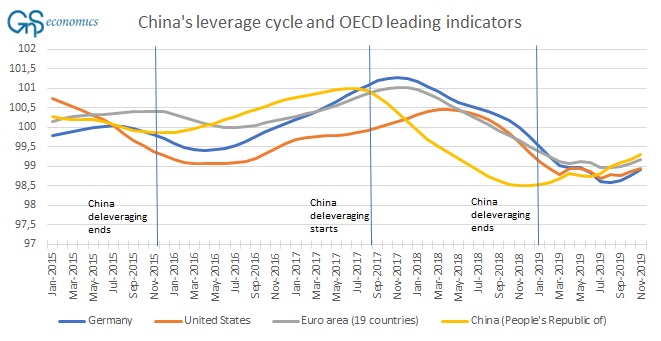 "Recent ... test by the ECB showed that half of the biggest banks in the Eurozone would not survive if financial counterparties and some commercial clients pulled their money from the banks."

"There are basically two ways for a bank to fail: a run on its liabilities or a collapse in its equity. The former means that depositors and investors withdraw liabilities, such as deposits and inter-bank funding, from the bank." 4/

"This will lead first to a liquidity crisis and then to insolvency, with the latter instance leading to a crash in the stock price as investors ruthlessly liquidate.

Both mean that trust in the ability of the bank to operate is lost."

And, as Europe holds the largest concentration of 'global systemically important banks', our banking crisis will also be yours, in an instant.

So, enjoy your euphoria in the #StockMarkets , courtesy of your local money conjurer, the #Fed, but note. 6/

Come March/April, it will most likely come to a very abrupt and dramatic end, regardless of the artificial liquidity creation of the #Fed.