As social evolves from a "bigger is better" ad-driven model to niche communities with direct user payment, the playbook for how creators succeed also changes.

A decade ago, @kevin2kelly wrote a blog post positing that the internet would enable many more creators to make a living. By cutting out middlemen and directly monetizing fans, creators could earn meaningful income without massive fame.
The recipe: get 1,000 fans paying $100/yr.

The idea of making money from a modest fan base is more salient than ever, but I propose taking it a step further: 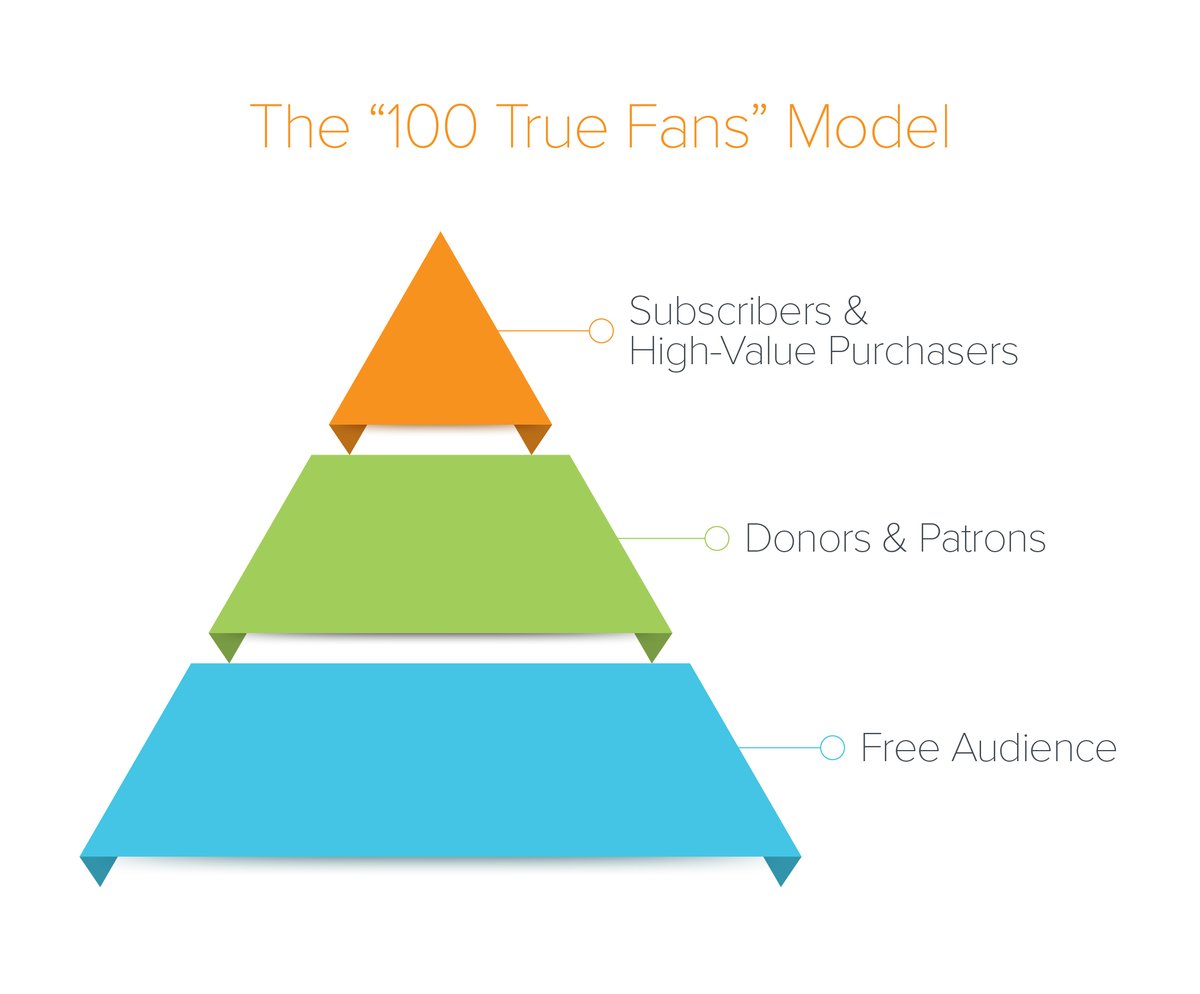 • On Podia, the number of creators earning $1K+/mo is growing 20% m/m, while customers per creator is growing just 10%

• On Teachable, many course creators are making over $100K w/ avg prices of $1K+ per course. E.g. a creator offering legal training for business owners made $118K last year from 99 students

Tons of other examples in the blog.

100 True Fans represents a move away from the traditional donation model—in which users pay to benefit the creator—to a value model, in which users are willing to pay more for something that benefits *themselves*. 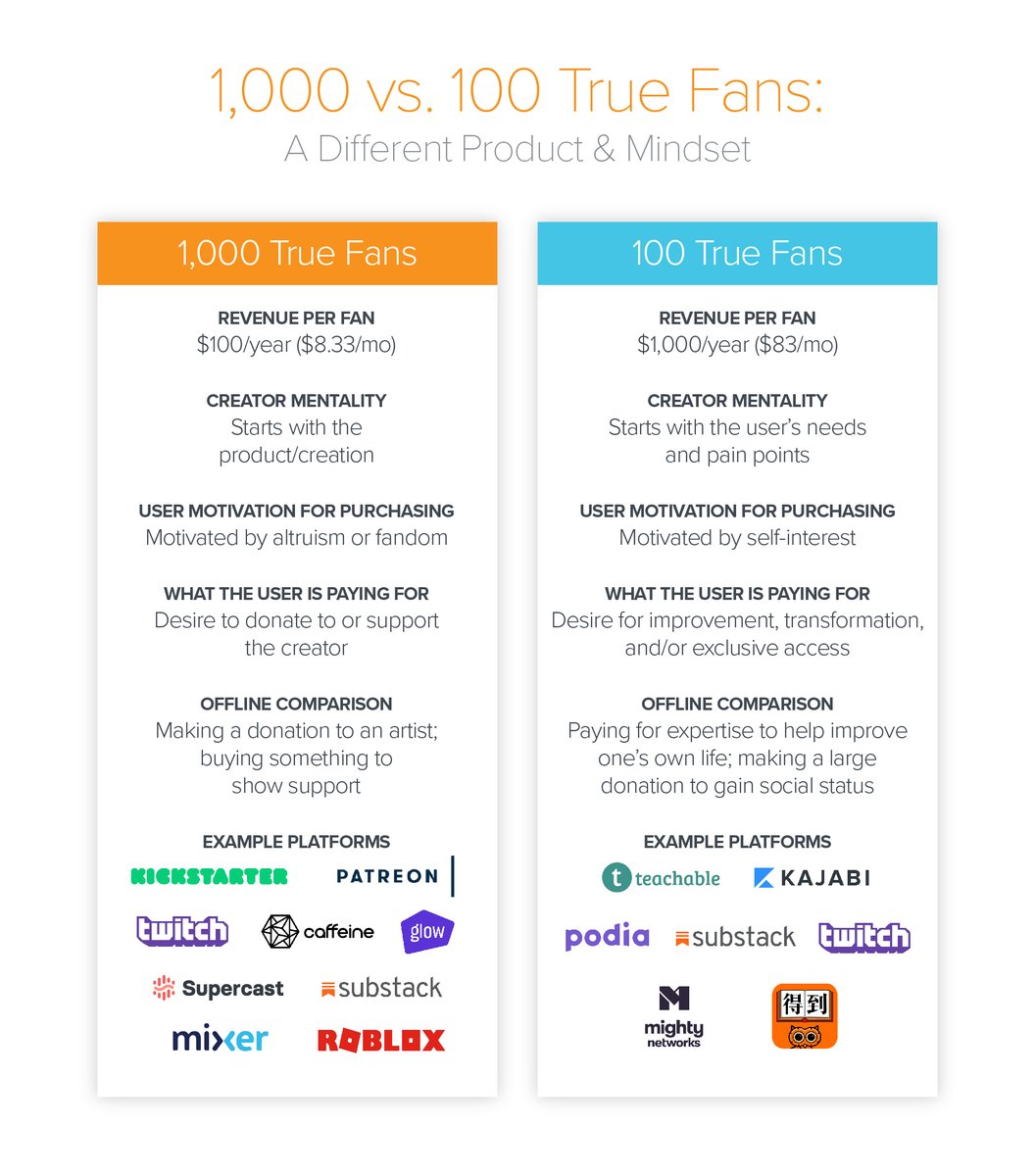 With 100 True Fans, that mindset is filtering into our digital lives as well.

The monetization strategy for 100 True Fans differs substantially from the 1,000 True Fans convention.

Whereas a fan might pay $100/year out of altruism, $1,000/year calls for 10x greater value. Super-fans expect to derive meaningful value and purpose from the product.

The recipe for monetizing with 100 True Fans requires going niche and offering fans the following 4 things:

What does each entail?

People are willing to pay high prices for premium content and access to a network of like-minded individuals that can't be found anywhere else.

Users’ propensity to pay is higher when there's promise of improvement and results. E.g. while podcasts are under-monetized, a growing # of paid audio apps (Headspace, Calm) get users to pay for content that meaningfully improves well-being.

The more someone pays, the more invested they are in achieving a desired outcome. Higher-priced creators don’t only offer more or better content, they also motivate and incentivize users to get what they paid for.

Rather than treating fans as a uniform group, 100 True Fans calls on creators to view their fans as diverse sub-segments.

The relationship super-fans have with creators is different: they are disciples, protégés, and co-creators, and require a whole new set of tools & platforms.

Why now? What’s driving this change in creator monetization?

It's a combo of: scaled social networks that make it easier than ever for users to discover creators; tech that enables richer, high-value content; and user familiarity with subscription services.

Creators that have larger diffuse audiences may be better served monetizing through sponsorships, which can be more lucrative and require less effort than designing a high-value program for 100 True Fans.

But for creators who earn the trust of a niche audience and who deliver what those users crave—whether self-improvement, connection, recognition, or belonging—100 True Fans can be an effective monetization model.

For founders and operators, there’s an exciting opportunity to build products that better align monetization with end user value, tap into the intense affinity super-fans have with creators, and build businesses based on the idea of 100 True Fans.

What examples have you seen in the creator space of 100 (or 1,000) True Fans, and what new platforms are seeking to enable this?

And if you haven't, definitely read @kevin2kelly's original blog post "1,000 True Fans." It's more relevant today than ever.  https://kk.org/thetechnium/1000-true-fans/ …