Jennifer Gunter+ Your Authors @DrJenGunter OB/GYN, appropriately confident, lasso of truth, Canadian Spice, I speak for no one but me. The Vagina Bible (bestseller! OMG). Jensplaining, NYT contributor. Feb. 06, 2020 3 min read + Your Authors

There is no such thing as a late term abortion. The fact that you cannot use medical terminology correctly suggests that you might not know abortion data either.

Here is a thread why “late term” abortion needs to be abandoned. I admit years ago I used to use it in my public writing because it seemed like it was a “common use” term that would help people understand.
Wrong. 2/

But the idea of using "late term" for abortion is imprecise and essentially a way to move goal posts. And those who LIE ABOUT ABORTION don't get to control the language, the EXPERTS do. 3/

And this is what happens when we let language get imprecise. The words we use shape how we think and forced birthers know that, it's why they have branded themselves as "pro life." Here is an excellent @TEDTalks on language and thought 5/  https://www.ted.com/talks/lera_boroditsky_how_language_shapes_the_way_we_think?language=en …

But they are forced birthers. If they cared for fetal life they would be aghast at the rate of maternal homicides, although not because they care about pregnant people but when a pregnant person dies the fetus usually does as well.  https://www.wwno.org/post/homicide-leading-cause-pregnancy-deaths-louisiana … 6/

And they are forced birthers because they get at worked up at induction of labor at 25 weeks being called an abortion when it is if there are serious fetal anomalies and you are ending the pregnancy with no plans for resuscitation. 7/

The reality is 1.3% of abortions in the United States are at of after 21 weeks, about 8,000 procedures a year. The reason why and the exact gestational age is not tracked by the CDC so anyone saying that they know that data is spreading disinformation. 8/

However, I did a deep dive a while back and of the 699,202 abortions reported to the CDC in 2012, 0.17% were at or after 21 weeks and occurred in a state where it was possible to have a post viability abortion for any reason.  https://drjengunter.com/2016/10/27/how-many-late-term-abortions-are-really-performed-in-the-united-states/ … 9/

I have looked at several studies that list reason for abortion between 21 and 24 weeks and it seems about 80% are for fetal anomalies/maternal health. As this is retrospective data from a few clinics it may not be generalizable to all or applicable after 24 weeks 10/

However, if your thing is preventing abortion for personal reasons after 24 weeks I encourage you to spend your time advocating for free, long acting reversible contraception. If your thing is policing other people's bodies just be honest about being forced birth. 11/ 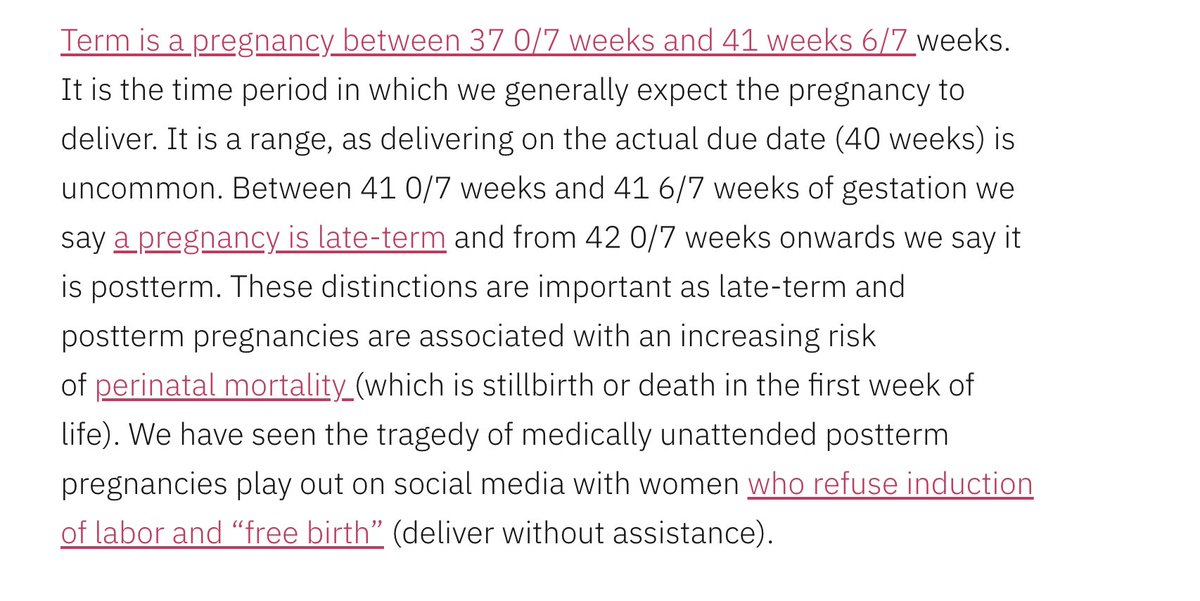 We really don't have good data on reasons for abortion at/after 21 weeks. If you want to reduce abortion at any gestational age your policies should be about reducing poverty, contraception access, and affordable, accessible, quality health care. 13/

A recent paper (2019) looking at 21-30 weeks gestation from one center detailed the indicated for termination and 86.5% were for medical reasons 14/

Some people at 21-23 weeks where delivery is inevitable (maybe infection, advanced dilation, etc) choose to have an abortion (either induction or surgical) because waiting is agony and some need to (infection). 15/

I have no sound cloud to promote so please watch my @TEDTalks on menstruation and pass it on!  https://www.ted.com/talks/jen_gunter_why_can_t_we_talk_about_periods?language=en …