1/n I have a simple model of US stock market valuation. I like to look at the Wilshire 5000 to get a broad stock market measure. I have just updated the model. Here are the results...

2/n This is actual (log) Wilshire 5000 versus the model. The model is based on two factors only - Potential Nominal GDP (as estimated by CBO) and Baa rated corp. bond yields. 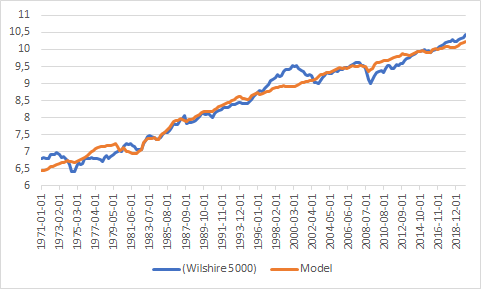 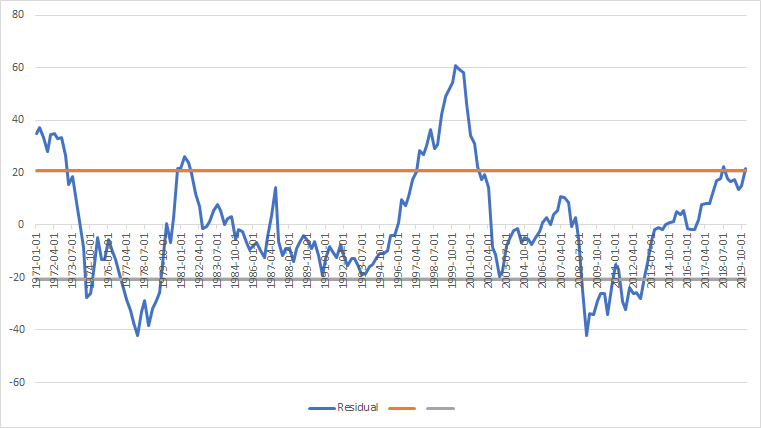 4/n We see the model fits the "normal" narrative about the US stock market. Particularly the overvaluation in 1999-2000, but also that the market became significantly undervalued in 2009.

5/n Hence, a lot of the positive stock market performance over the past decade can be attributed to the fact that stocks simply had become very cheap in 2009.

6/n However, in early 2016 the US stock market reached a "fair valuation" and has since become overvalued and recently we have reach levels above 1 standard deviation overvaluation.

9/n However, the 80s were different. During the 80s we have very positive stock market performance despite having an overvalued market to begin with. However...

10/n ...during the 80s the model can explain the positive stock market performance as a consequence of a sharp drop in bond yields.

11/n However, it is very hard to see bond yields a lot more from present low level and hence, the only way we should see the stock market valuation coming down is through stock market returns being lower than NGDP growth over time.

12/n In the model the coefficient on potential NGDP is just above 1 meaning that over time stock market returns should be more or less in line with NGDP growth (if yields are unchanged and there are no misvaluation of the market).

13/n We can use this inside to forecast US stock market performance over the coming decade.

15/n Meaning if the Fed hits its 2% inflation target we should expect around 0% real returns on US stocks over the coming decade.

16/n Of course this is still more than the expected real return on 10 year US Treasury bonds...

17/n I hate using the term "bubble" and I don't think there is a "bubble" in the US stock market, but I just find it very hard to be particularly optimistic on US stocks right now...

18/n That, however, doesn't mean that we are in for a major correction and unlike early 2018 when I last time really was worried about the outlook for stocks it inflation expectations are well-below Fed's 2% inflation target so we really should expect the Fed to kill the rally.

19/19 Anyway, market timing is impossible so my insides on this should only be used in terms of long-terms strategic allocation and he the call must be to underweight US stocks. Compared to what you ask? Let me get back on that later;-) THE END.