A lot of talk about the economic effects of the #COVID_19 . There are still those hoping for a quick (V-type) recovery.

In this thread, I'll try to be as detailed as a macroeconomist can be in explaining, why this is very unlikely.

But first, please remember this. 👇 1/ 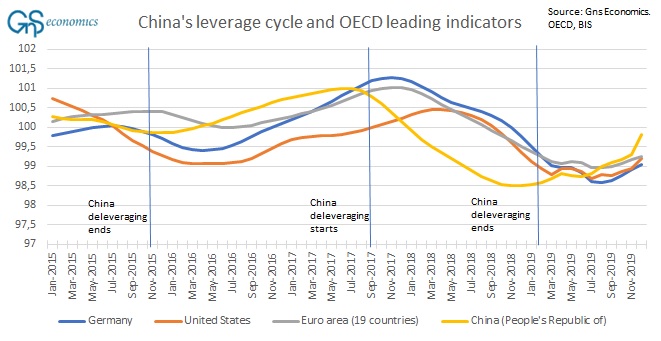 Second thing to note is:

"In this situation, it won't be feasible to adopt a proactive fiscal policy by expanding the fiscal expenditure scale."

The above statements should not be disregarded lightly.

Similar statements, given at the start of the Chinese deleveraging in early fall 2017, indicated that the deleveraging had truly started. 👇 3/
https://gnseconomics.com/en_US/2017/10/16/what-will-china-do/ …

Another, and more serious problem is the way shutdowns accumulate in the real economy.

When supply routes and production are run down, it will take a long time to ramp them up again.

Shutdowns and collapsing demand result to laying off and/or suspension of workers,... 4/

... which will diminish production potential and consumption further.

So, production potential will be decreased and ramping it up again requires that suspended workers return to work and those laid off will be re-hired. This is something that cannot be achieved quickly. 5/

As domestic and overseas customers have, or will do the same, this will show as a lack of demand in many parts of supply-chains.

Thus, even if all workers could return to work, there is likely to be diminished demand for production, globally, even now.

And, we have not even seen the first round of global 'demand destruction'!

Alas, because supply-chain disruptions, layoffs and fear will hurt consumption, global demand will, in any case, be slow to recover to pre-outbreak levels.

And, this gets us to really scary part. 7/

How do you think massively levered world #economy can cope with such sudden collapse in economic activity?

Well, the (very) likely answer is: not good.

Any banking problems, caused by the slump, in Europe or China will surely worsen collapse of demand and production. 8/

Like we've been warning for a while, the European banking sector cannot cope with the #recession .

"As a result of all these policy mistakes, a large part of the European banking sector has probably been insolvent for the past 10 years". 9/
https://gnseconomics.com/en_US/2019/10/03/the-destruction-of-the-european-banking-sector/ …

And, when the fragile global #economy starts to crack, there's effectively no one stop it from collapsing thanks to central banks who, like idiots, have resuscitated the global economy for the whole length of the expansion.

So, the "Onset", the first of the five phases of the coming crisis, is practically upon us. 👇

Sure, central bank liquidity can carry the #stockmarket for a while, but make no mistake, market will not sustain a #recession , which is coming. 11/
https://gnseconomics.com/en_US/2020/02/10/the-stages-of-the-collapse/ …