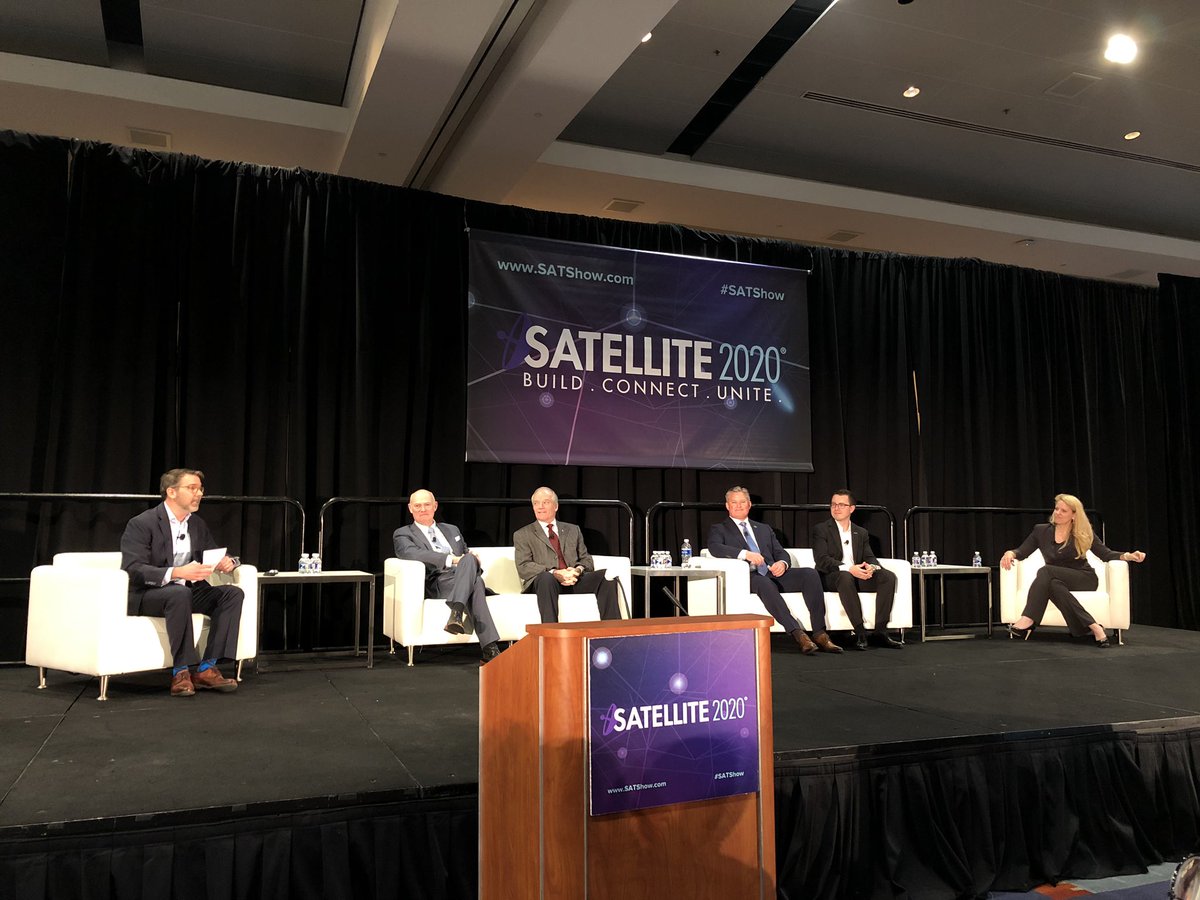 Shotwell: SpaceX is looking at a May time frame for the company's first launch of @NASA_Astronauts on Crew Dragon

Shotwell: I don't want to make any predictions for how many launches we will make this year, but you can look for two or so launches a month for us, with our customers and Starlink.

Bruno: ULA is monitoring coronavirus very carefully and expect to weather this storm. We're being proactive and restricting travel domestically, have an employee in George working from because because they were exposed to someone else.

Precourt: Northrop is also putting contingencies in place for coronavirus, so we'll probably build up a backlog for a little and then ramp back up.

Bruno: Shotwell and I were recently at a Space Council UAG meeting and heard the industry's initial thoughts on working with the Space Force and meeting their needs.

Shotwell: Space Force was primarily seeking input on acquisitions, they want to know how to best leverage innovation despite a typically slow government contracting process.

Hoffman: Space Force has been very receptive to Rocket Lab, as we've launched many national security payloads. My previous experience at SpaceX was on the EELV program was very different than the smallsats and cubesats I work with now.

Ellis: The national security opportunity is the reason Relativity has a site at Cape Canaveral, because having access is very key.

Bruno: It's clear that the launch market is absolutely over saturated. For launch providers its very predictable, as you know about 7 years.

ULA needs about 8-12 launches per year to be sustainable.

Bruno: The Air Force will select ULA for the LSP awards "and one of my other colleagues here."

Shotwell: National security space "is a precious market" for SpaceX, as "it's good business," but we work to make sure our rocket revenues are diverse, with launches for NASA and more.

Shotwell: Starlink will be enormously helpful to the evolution of our launch business, as SpaceX will invest heavily in our rockets with the revenue from Starlink.

Davenport: What does Starlink mean for SpaceX's bottomline and where's the bottom of the market for launch costs?

Shotwell: I think we're at the bottom for where we can actually sustain a business.

Shotwell: Starship is a different beast in its own, as if you reuse both the first and second stages of a rocket then it changes the economics of launch dramatically.

Shotwell says Elon Musk flew in from SpaceX's Starship facility in Boca Chica, Texas for last night's fireside chat and then quickly flew back, as its a rocket he really wants to make work.

A terse back-and-forth between SpaceX and ULA, after Bruno said that his company has "no outside investors."

Shotwell: But the Air Force is your investor, through LSA.

Bruno: They're investing in a system.

Shotwell: The Air Force helped with the rapid development of Raptor, the rocket engine of Starship

Ellis: I am 100% convinced that "the future of aerospace will be dominated be 3D printing," whether its Relativity or not. I think 3D printing is the biggest disruptive technology in rocketry next to reusability.

Bruno: 3D printing is another manufacturing tool. It's useful for some complex assemblies but there are other techniques that are more effective, especially because 3D printing can be too slow.

Bruno: We don't see 3D printing a a solution for every manufacturing problem.

Ellis: I see it as one that is just beginning its full potential.

Precourt: I was just in the Pentagon this morning and there's a war room being established for technology acquisitions and logistics for both our military and national security launch.

Shotwell says SpaceX is largely done with the first stage of Falcon 9 but "there are some things that were still looking to do on the second stage," because SpaceX produces so many and doesn't reuse them.

Shotwell spoke to reporters after the panel and emphasized that her prior comments on Starlink spinning off are in line with Musk’s last night, as it’s something SpaceX has thought about but is not focusing on right now. Full story coming.